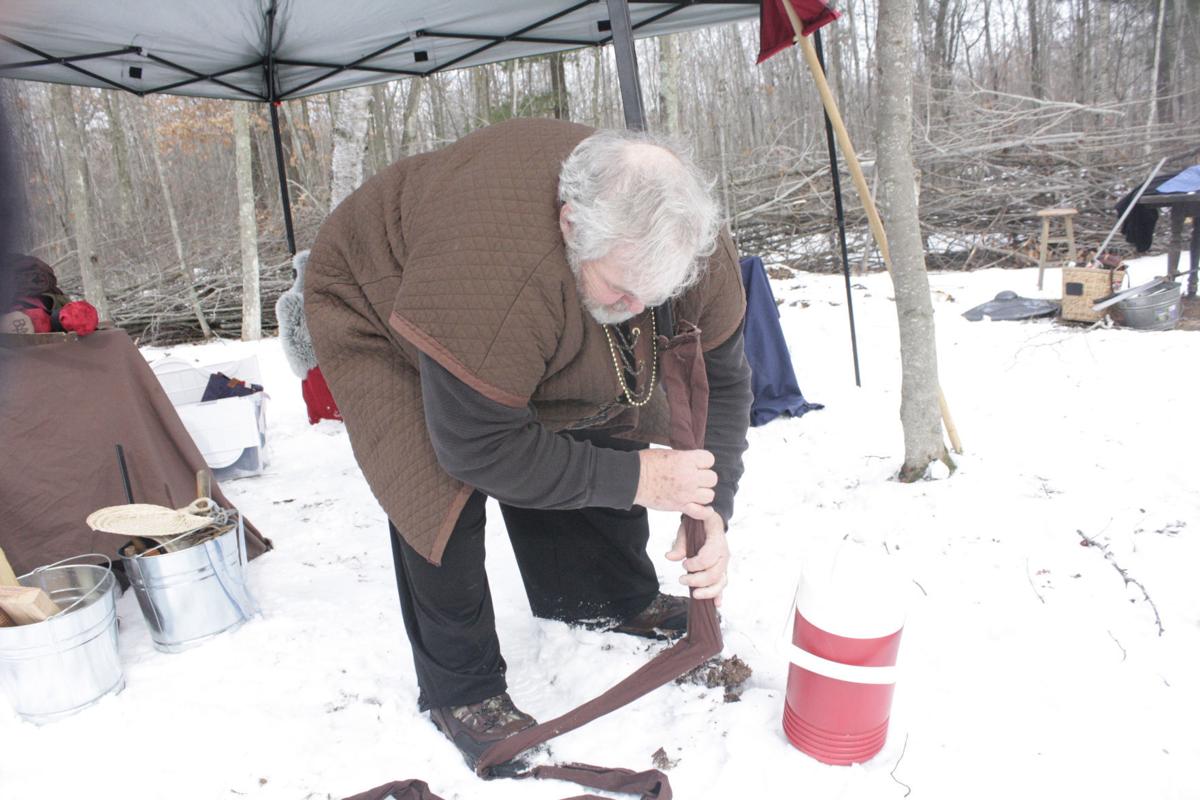 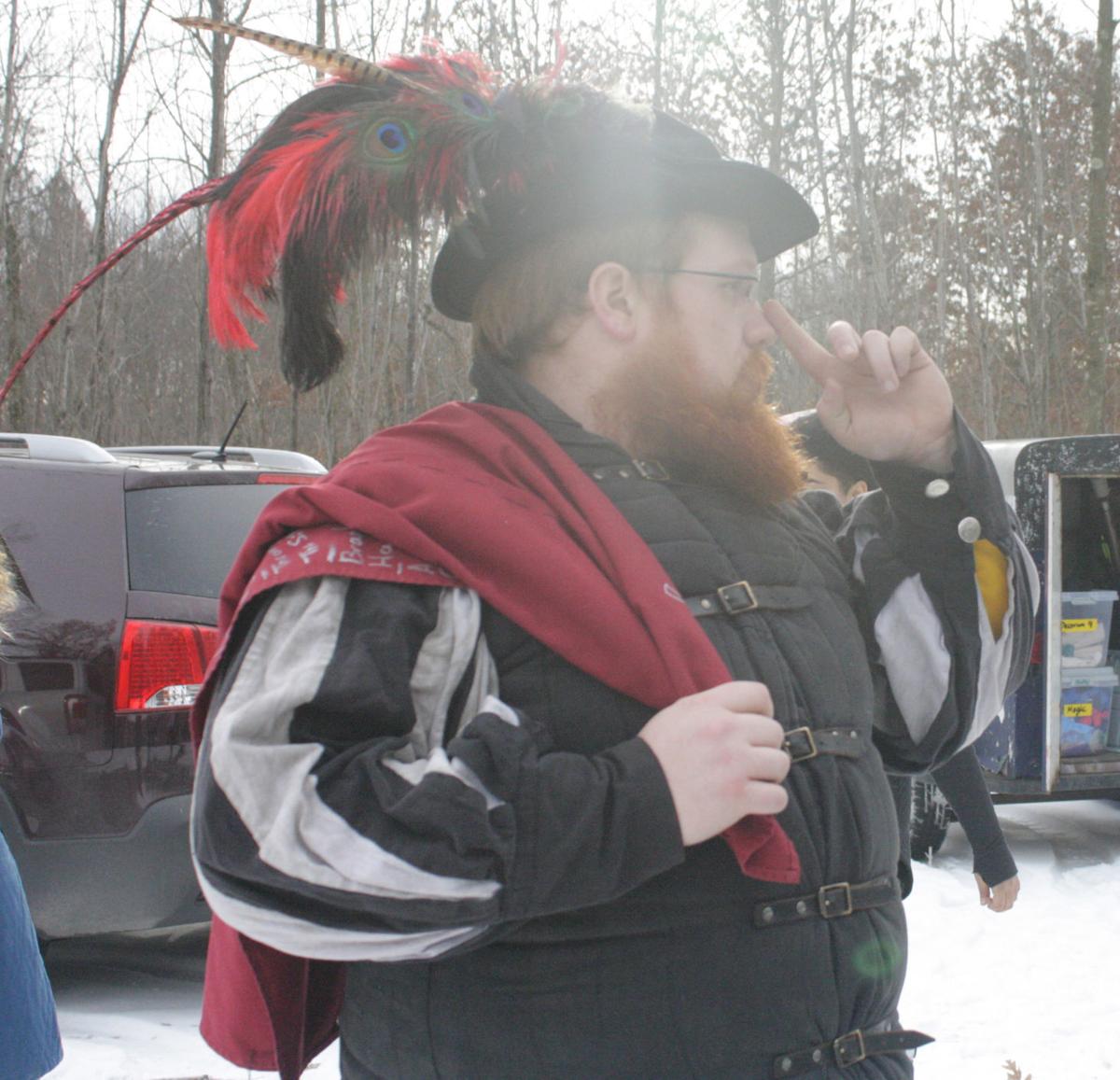 Tyler Dubey speaks with other roleplayers before the great hunt begins. 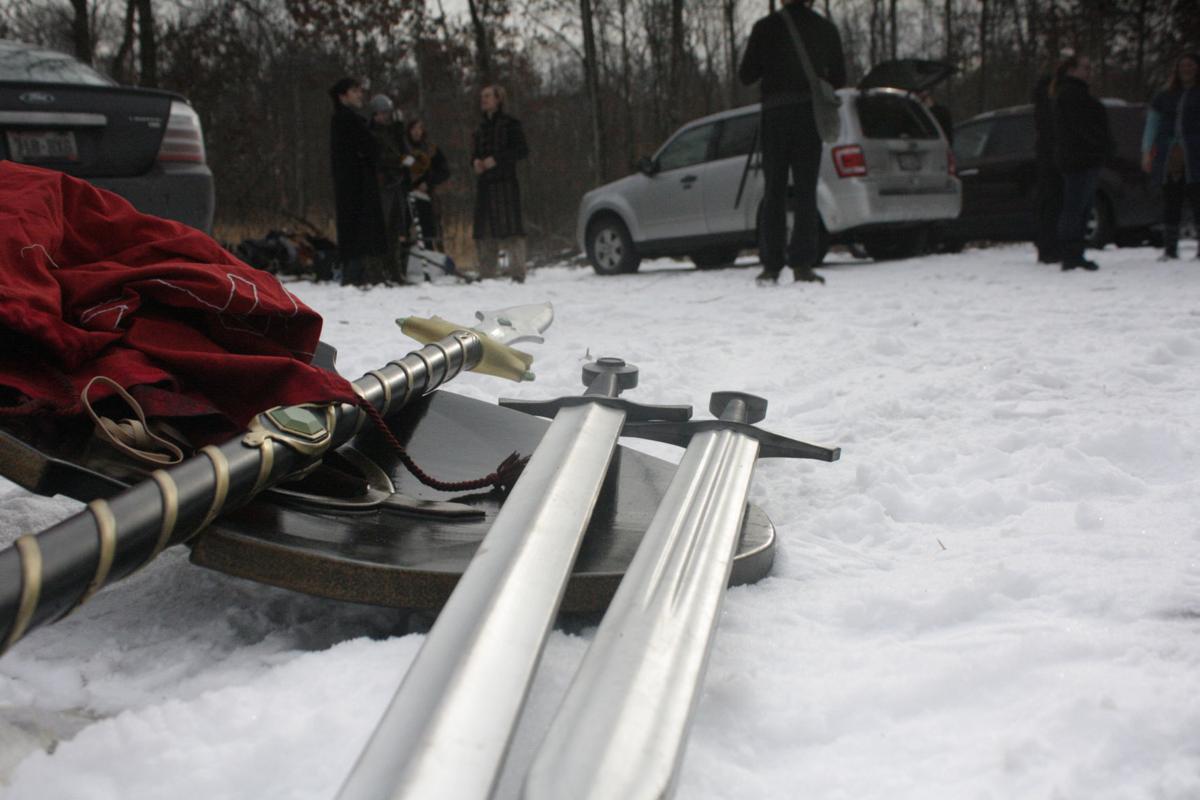 Realistic foam swords and a spear sit atop a shield in the parking lot before the great hunt begins. 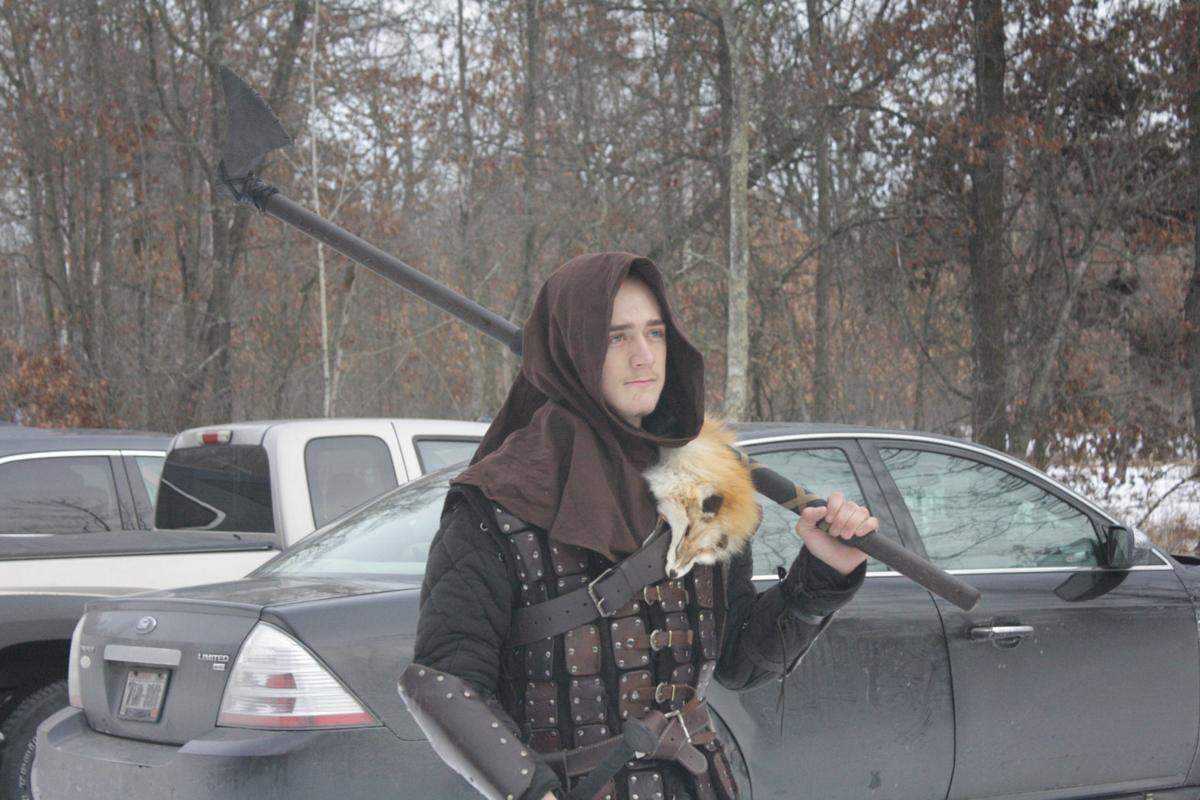 In full costume, a roleplayer waits in the parking lot before the event begins. 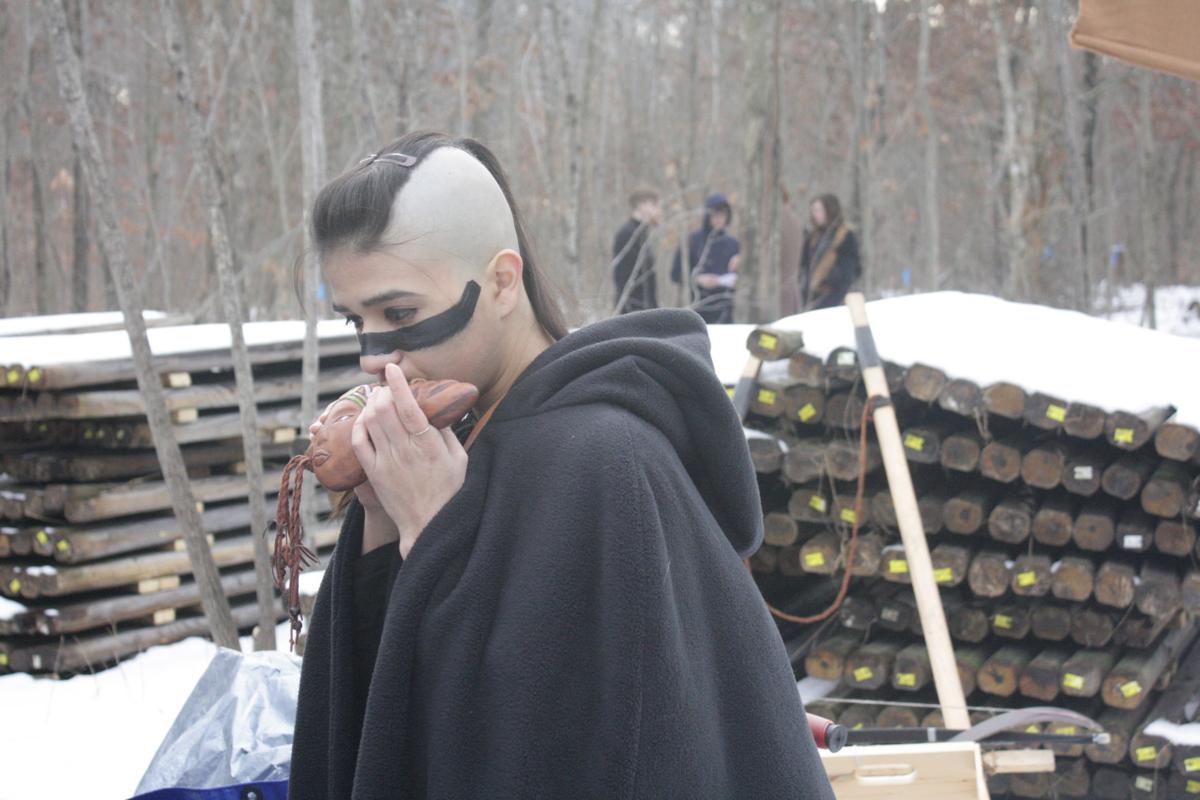 Zeke Hellerud plays an ocarina before the great hunt begins. 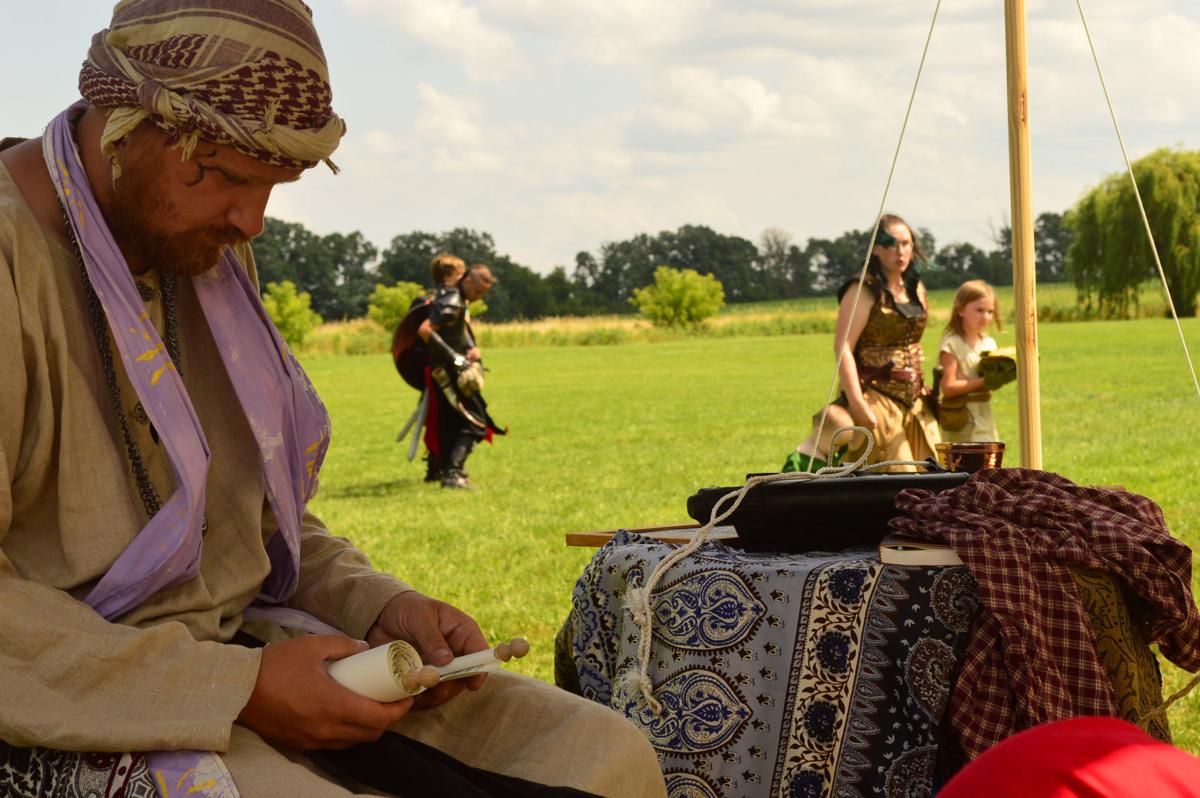 A scroll holds the attention of a roleplayer in Mauston. 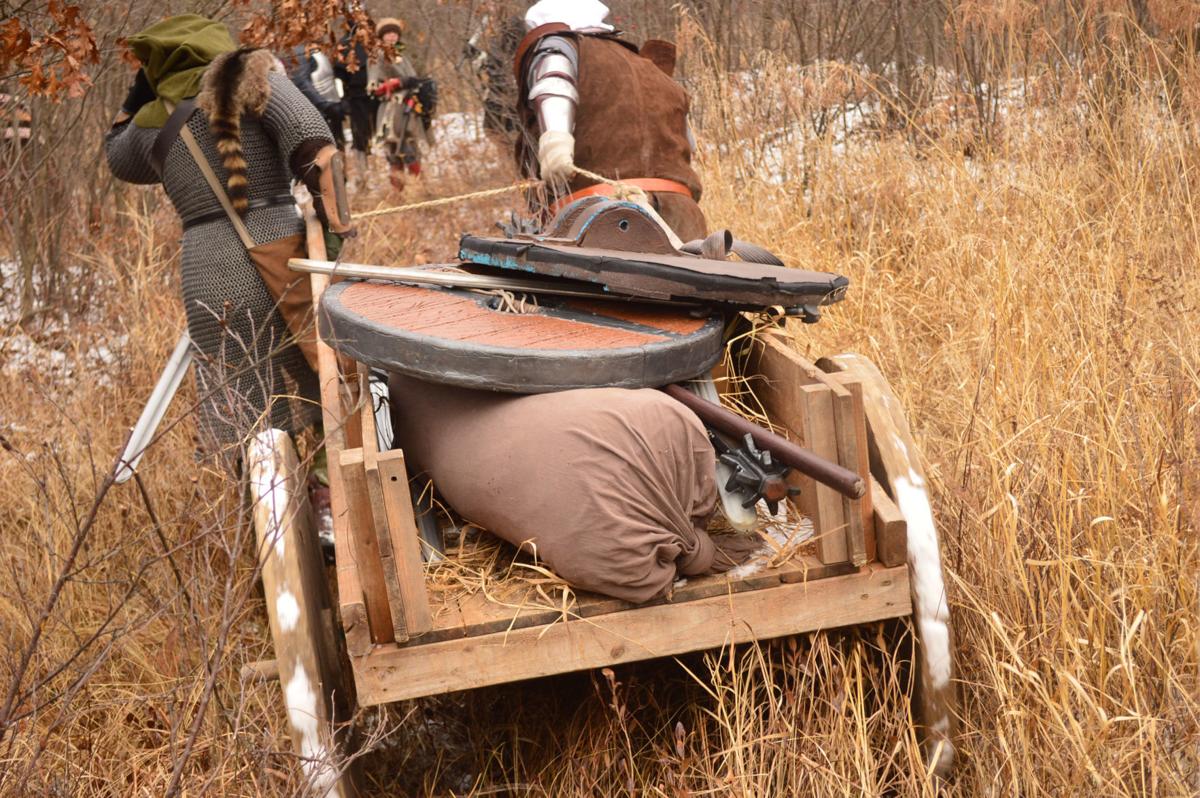 Roleplayers drag a cart of goods through a field at an event.

Medieval fantasy enthusiasts have a land of their own after a fantasy roleplaying group established a permanent presence in New Lisbon. Last Hope Live Action Roleplaying purchased a 46-acre piece of property on Frontage Road near McDonald’s.

The group held events in several areas throughout Wisconsin by working with landowners, but plans to construct permanent structures on the new property to help create immersion for roleplaying. The New Lisbon property is the first to be purchased by the club. Last Hope will be seven years old in July.

Last Hope met at the New Lisbon property Jan. 20 for the Great Forest Hunt, the latest chapter in the storyline written by the group. Fully costumed participants played out the event with realistic foam weapons to simulate combat.

For Shawn Smith, who became involved with the group through photographing them for a few years, LARPing is an activity worth dedicating some time to. The permanent location will also help generate funds for the club. “They can actually save on some costs, and actually eventually build whatever they might want,” Smith said. “They have plans to build a little village or farmstead.”

Co-Owner of the club Mischelle Maas-Jopp has major plans for the property. The club moved lumber to construct eight foot walls. “We’re going to have a little village so people can go out and explore different areas of our world,” Maas-Jopp said. “When you walk into our world, you are really walking in to our world.”

Dungeons and Dragons fans are natural fits for Larping. Experienced Dungeons and Dragons player Tyler Dubey sees it as a more involved version of the roleplaying experience. “Here you can create your own story and discover what this character you make turns into,” Dubey said.

Last Hope will promote the club to gain new members at conventions like Gary Con, Ever Con, and Wizard Con. They have are successful in gaining members from as far as Illinois, Iowa, Ohio and Michigan.

Last Hope members learned real world skills from participation in the club. “We have people that make chain mail, their own clothing, they love to bake period-authentic stuff,” Maas-Jopp said. “I’ve learned to blacksmith from people that we’ve LARPed with.”

The club’s founder, Ryan Maas-Jopp came to larping through Dungeons and Dragons and fencing. “We have a full storytelling team,” Ryan said. “It’s kind of like an interactive game meets an improv theater.”

“The community that we have is so friendly and so inviting,” Maas-Jopp said. “It looks intimidating from the outside, but once you get into it, it’s just a world of fun.”

The main construction of new structures at the New Lisbon property will be in Spring. Last Hope LARP will meet again in February.

Carol J. Firari, age 59, of Lowell Township, went to be with her Lord when Heaven gained an angel unexpectedly on Saturday, Jan. 11th, 2020.

SHEBOYGAN — A five-day jury trial was put on the Sheboygan County Circuit Court calendar for John Hammen, 59, who is charged as a result of a …

Tyler Dubey speaks with other roleplayers before the great hunt begins.

Realistic foam swords and a spear sit atop a shield in the parking lot before the great hunt begins.

In full costume, a roleplayer waits in the parking lot before the event begins.

Zeke Hellerud plays an ocarina before the great hunt begins.

A scroll holds the attention of a roleplayer in Mauston.

Roleplayers drag a cart of goods through a field at an event.