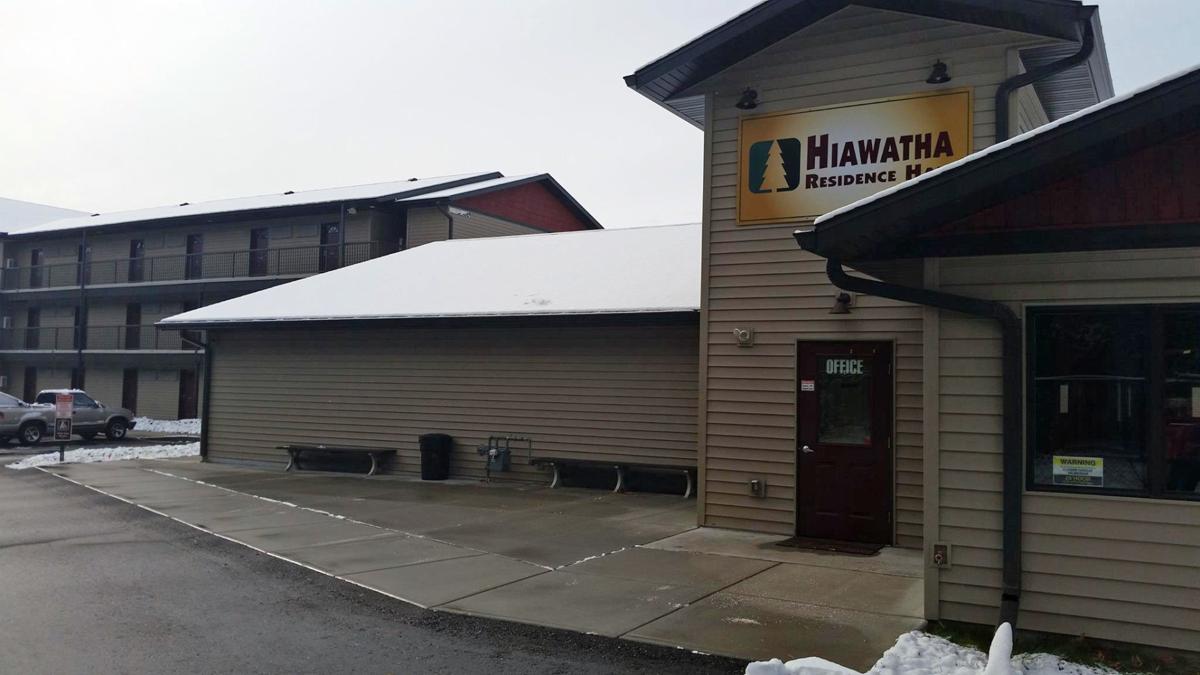 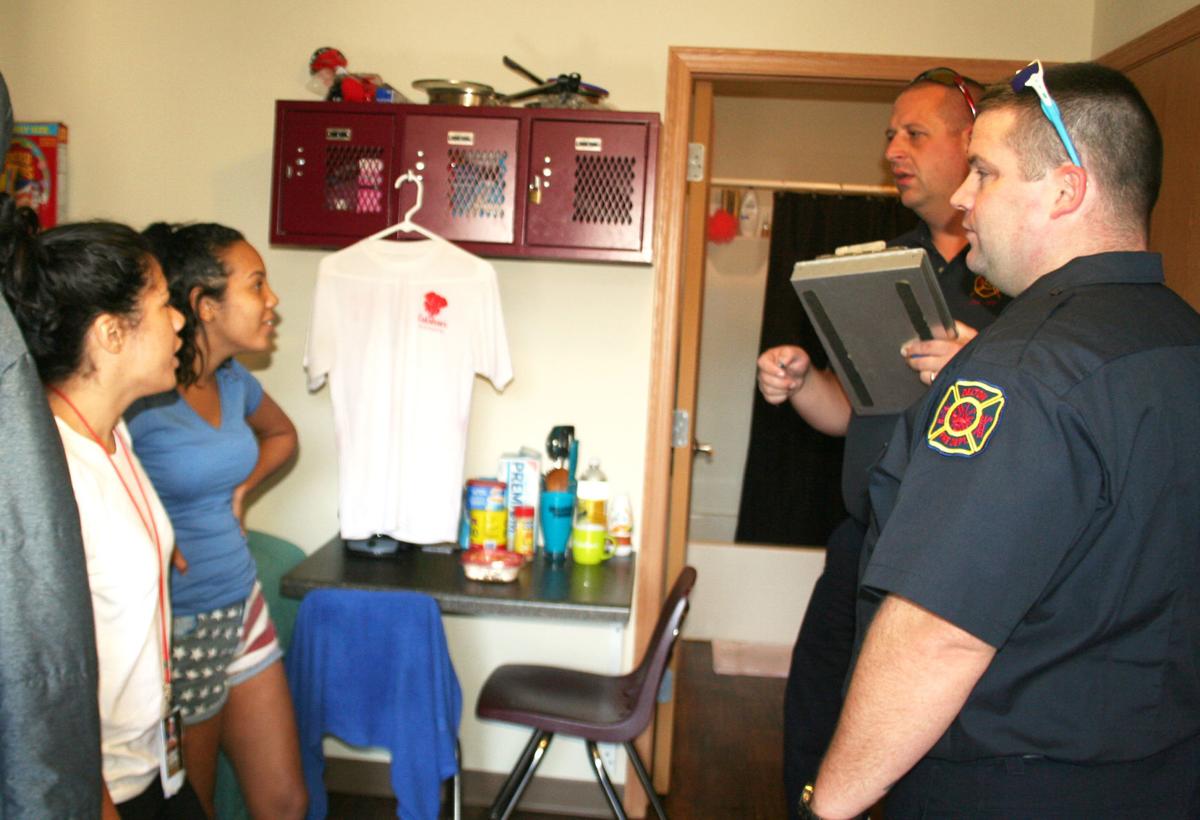 Lake Delton Student Housing Inspector Jimmy Bowen, second from right, introduces himself and firefighter John Undraitis in 2016 to review fire and safety procedures with two international students who had recently moved into the Hiawatha Residence Hall in Lake Delton. 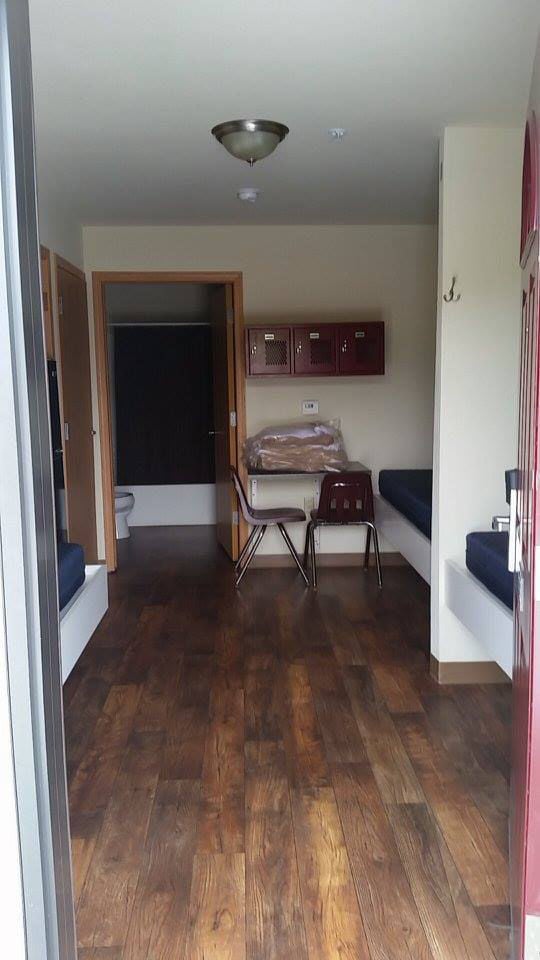 A typical dorm room at Hiawatha Residence Hall houses between three and four students, though during the outbreak of COVID-19 students have been offered individual rooms to maintain social distancing.

After large scale testing of more than 180 international students at a Wisconsin Dells J-1 dormitory, officials have confirmed 12 additional cases of COVID-19. The positive tests bring the total at the dormitory to 14.

The cases at Hiawatha Resident Hall in Lake Delton, confirmed April 30, marked the highest single day jump of cases in Sauk County since the beginning of the outbreak.

Sauk County Health Officer Tim Lawther said the individuals who tested positive have been placed in isolation and their contacts have been notified of possible exposure to the virus and placed in quarantine.

The resident hall, located at 200 W. Hiawatha Drive, holds about 180 individuals on J-1 student visas in three to four-person dormitory rooms. The students receive the visas through a program for international visitors to live and work in the U.S. With travel bans in place, many of the students are stuck in Wisconsin Dells with no way to return to their home countries, and with the resorts closed they are unable to work.

Each of the students who have tested positive have been moved to their own room in a separate dormitory, according to Dan Bullock of Holz Company, which owns Hiawatha Property Management and runs the Hiawatha Residence Halls.

“Before all this started, we prioritized taking steps to prevent since we knew it was a matter of when,” Bullock said. “Each of the students were offered their own room… though some stayed two to a room if they were family members.”

According to Lawther, every student and staff member at the dormitories was tested. The tests come more than three weeks after the facility saw two students test positive April 10.

After the first two cases, occupants of the dormitory were either placed in isolation after showing symptoms of COVID-19, placed in quarantine without showing symptoms due to potential exposure or left in there room after not having exposure to those in the other groups and having no symptoms. Despite the precautions an additional 12 students tested positive, bringing the total number of cases to 14. According to officials, one of the 14 students has recovered so far.

“Our job is to keep the students safe, housed, and fed,” Bullock said. “The community has been amazing in coming together and providing for the students.”

The students are being provided food by donations from the community and local businesses in the Wisconsin Dells area. Students who are unable to work are being allowed to stay at the dormitory rent free.

As Wisconsin begins to ease some restrictions during the COVID-19 outbreak, a study shows Juneau County residents are having difficulties soci…

While many other local businesses remain shuttered due to the coronavirus pandemic, one of Baraboo’s most colorful stores reopened in mid-Apri…

Sauk County remains in the first phase of its reopening plan because of COVID-19 data that’s “on the fence” between phases, said county Health…

Lake Delton Student Housing Inspector Jimmy Bowen, second from right, introduces himself and firefighter John Undraitis in 2016 to review fire and safety procedures with two international students who had recently moved into the Hiawatha Residence Hall in Lake Delton.

A typical dorm room at Hiawatha Residence Hall houses between three and four students, though during the outbreak of COVID-19 students have been offered individual rooms to maintain social distancing.