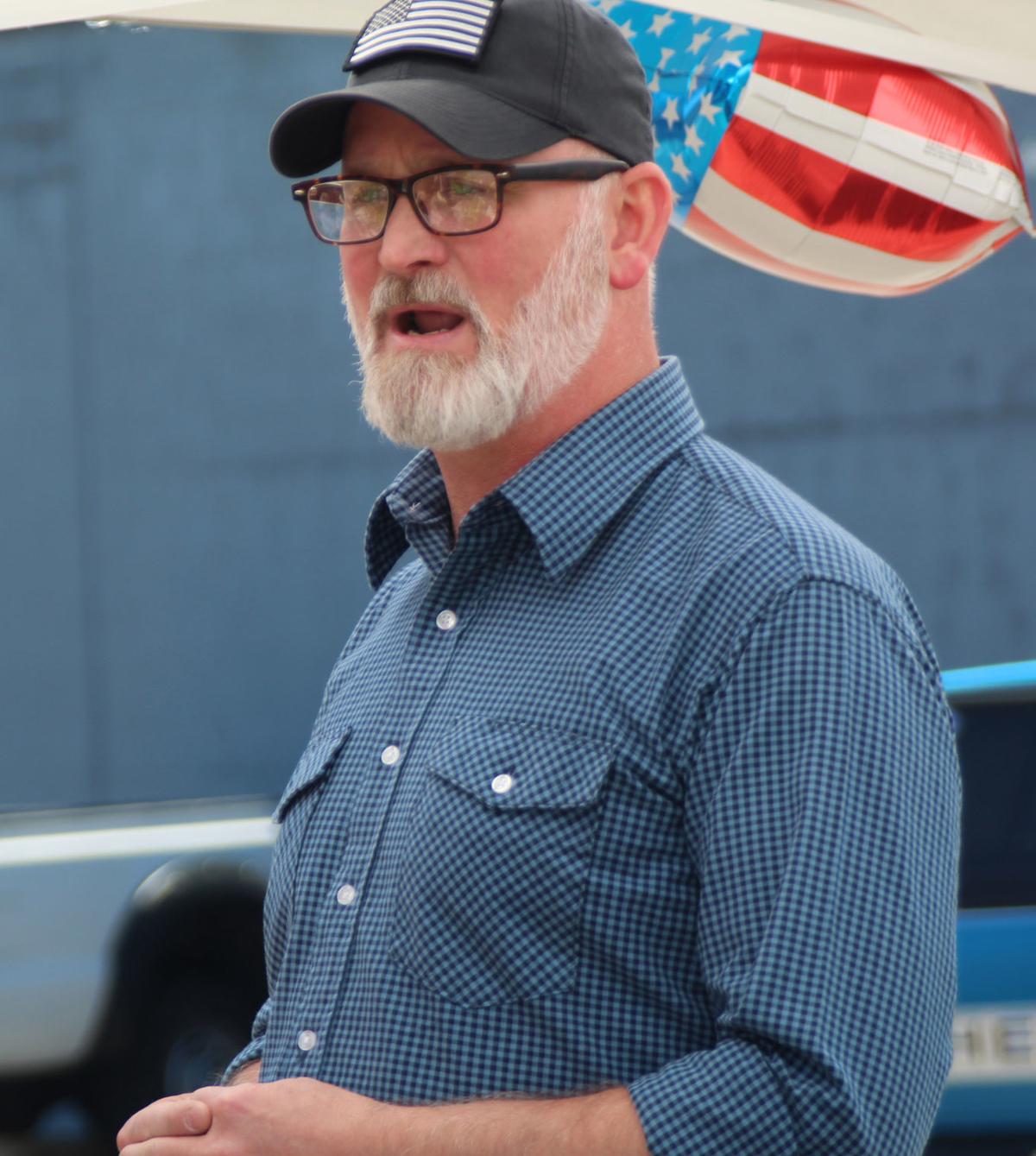 U.S. Congressional candidate Derrick Van Orden speaks about his background and stance on issues to voters and supporters June 13 at Roman Castle Restaurant in Mauston. Van Orden, a Hager City resident, is running as a Republican for Wisconsin's 3rd Congressional District.

U.S. Congressional candidate Derrick Van Orden talks about his stance on issues to a group of voters and supporters June 13 at Roman Castle Restaurant in Mauston. Van Orden is running as a Republican for Wisconsin's 3rd Congressional District seat, a spot currently held by longtime Democrat Rep. Ron Kind.

Derrick Van Orden has a lengthy list of achievements. He’s hoping to add U.S. Congressman to that list as he seeks the primary spot in the Republican nomination to represent Wisconsin’s 3rd Congressional District.

Van Orden served 26 years in the Navy, including as a Navy SEAL senior chief with five combat tours. He’s even had an acting role in the movie “Act of Valor,” is a published author, owns a hobby farm and briefly ran a small café where he lives in Hager City in Pierce County. He met with voters and supporters to share his background and platform June 13 at Roman Castle Restaurant in Mauston, an event hosted with the Republican Party of Juneau County.

He told the Star-Times, the experience he has in his other endeavors provides him the leadership skills necessary to represent the district in Washington D.C.

The Democrat side has Mark Neumann challenging incumbent Rep. Ron Kind, D-La Crosse, in his bid to retain his seat in the U.S. Congress. Kind has held the same position since 1997.

Van Orden spoke of many reasons he is against Kind, including the longtime politician’s absence and work ethic in Congress.

Van Orden also spoke of Kind’s lack of response when he contacted him to ask about his position on President Donald Trump’s impeachment prior to the House of Representatives’ vote to take up the matter. Kind was one of the last representatives to make his position known on Trump’s impeachment and eventually voted in favor of impeaching Trump last December. It was that moment that made Van Orden want to run for office.

Speaking to voters outside the restaurant, he explained his platform which comes from rights in the Declaration of Independence: life, liberty and the pursuit of happiness. As a former combat veteran, Navy Seal, paramedic, father and grandfather, he spoke in favor of pro-life, adding life begins at conception and should be protected at all times. He said he “would do everything he can” to defund Planned Parenthood. He spoke against practices of socialism and said he wouldn’t allow it to take root in the nation.

When asked what other topics he would bring to the table if elected, he said he would support pushing a balanced budget amendment and tie in infrastructure bills with additional funding for trade schools to bring more workers to support the investment.

“Right now if we passed a $1 billion infrastructure bill, or $1 trillion rather, we wouldn’t be able to do it because we don’t have enough welders and plumbers and carpenters and electricians,” he said.

Van Orden also mentioned George Floyd’s death after former Minneapolis Police Officer Derrick Chauvin knelt on his neck for more than eight minutes, which has sparked protest around the nation against racism and police brutality. Van Orden spoke in favor of the peaceful protests for people to voice their views, items he said are supported by the United States Constitution, and condemned the violent protests.

He said Chauvin’s actions were “abhorrent” and criminal. He also spoke of reasons to support police departments, including the risk those in the profession take to save others and put their lives on the line to help and protect the public. Some municipalities around the nation have called for defunding the police in wake of the protests.

In a separate interview, Van Orden said defunding police departments would lead to a lack of training.

“When we start taking money away from police departments it’s going to take away from training,” he said. “The less training you have, the higher propensity you have for making mistakes and failing your mission. That’s proven in any type of industry.”

New Lisbon residents Patty Turkington and Marv Newlun, who have been together for 19 years, both attended the event to hear Van Orden speak. Newlun said it was the first time he’s heard Van Orden speak and was impressed with what he had to say.

“I was very pleased with his messaging,” Newlun said. “He’s got my vote and that’s because I like what he said today.”

Turkington said she was impressed with Van Orden’s achievements, including his military service, which she thought made him a good candidate for the seat and also believes he understands how history has changed over the years.

“I think Ron Kind hung himself when he voted for the impeachment,” Turkington said. “There’s a good chance there is enough Americans that are tired of the tax dollars going to investigations and that Congress was a ‘do nothing’ House of Representatives because they were too busy doing investigations. And I think the ‘do nothing’ Democrats are going to hurt them big time.”

U.S. Congressional candidate Derrick Van Orden speaks about his background and stance on issues to voters and supporters June 13 at Roman Castle Restaurant in Mauston. Van Orden, a Hager City resident, is running as a Republican for Wisconsin's 3rd Congressional District.

U.S. Congressional candidate Derrick Van Orden talks about his stance on issues to a group of voters and supporters June 13 at Roman Castle Restaurant in Mauston. Van Orden is running as a Republican for Wisconsin's 3rd Congressional District seat, a spot currently held by longtime Democrat Rep. Ron Kind.