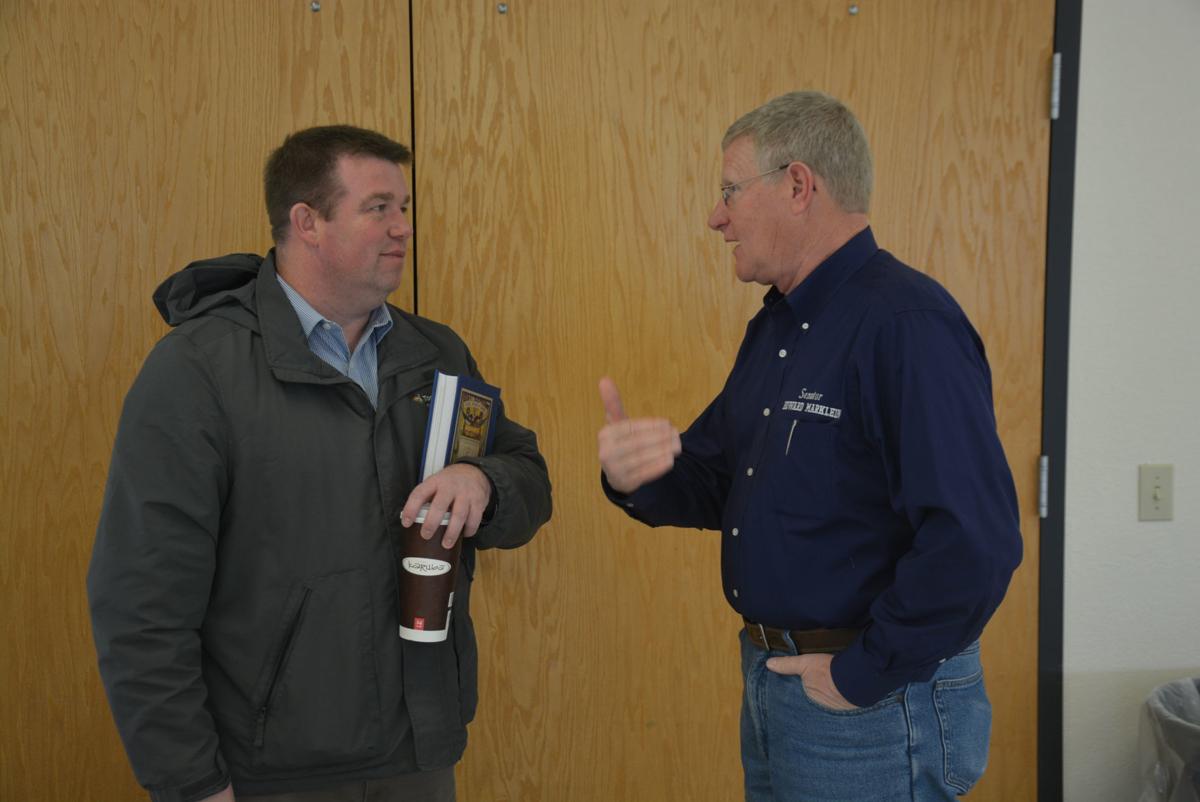 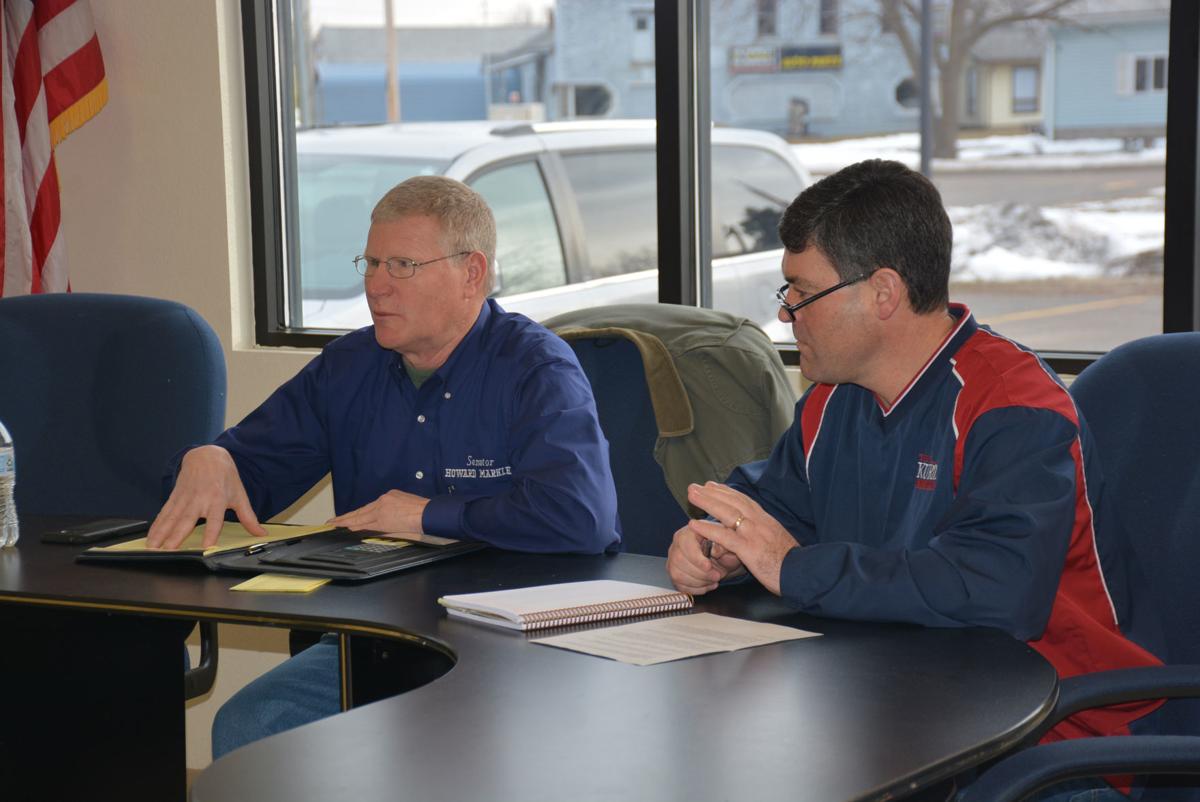 Republican State Senator Howard Marklein and Republican State Representative Tony Kurtz spoke for about an hour on various issues facing constituents of their districts at the New Lisbon City Hall, the first of a series of planned listening sessions throughout February.

Marklein, representing the 17th Senate District, started the session by praising the financial status of the state.

“Our balance sheet for the state of Wisconsin is the strongest it’s been since 1990, which is good news for state taxpayers,” Marklein said. “We’re expecting $818 million more in revenue collections in this budget… than we had budgeted last summer.”

Marklein said the revenue, once collected, is split halfway between a “rainy day” fund and other projects, such as spending, paying down debt, or reducing taxes. The “rainy day” fund is expected to exceed more than $1 billion dollars in the next year.

“When there is money sitting around in Madison… it’s a challenge,” Marklein said. “I’ve had people say ‘what about spending it on roads?’ I’m all for roads, but the minute you crack the seal on that rainy day fund, it’s gone, because I guarantee you there will be a whole line of people to spend it on all sorts of things… It’s a savings account, that’s what it is, and savings should be saved.”

Kurtz agreed with Marklein on saving the funds in the “rainy day” fund.

“Everyone in this room understands the downturn we had in 2007,” Kurtz said. “This is a buffer, and I can’t stress the importance of that enough.”

Of the portion of additional revenue not going to the “rainy day” fund, Marklein said his priorities are assisting with funding for rural roads and farmers.

“We need to help our farmers,” Marklein said. “Our state economy is doing well but our agricultural community is not.”

Camp Douglas EMS Director James Newlun asked both Marklein and Kurtz to prioritize EMS funding when looking at where to spend additional revenue.

“It’s been over 10 years since there’s been an increase in Medicaid reimbursements for EMS, and that increase was approximately one percent,” Newlun said.

New Lisbon Clerk Lisa Vinz agreed with Newlun, explaining the city loses about $30,000 every year in EMS funding related to the correctional institution, while also lamenting the increased costs for EMS passed on to the municipality due to lack of Medicaid reimbursement for calls.

“We have seen a huge increase in our per cap for EMS services,” Vinz said. “Ten years ago we were paying shy of just six dollars per person for ambulance services, now we’re paying $30… this is a huge burden on our taxpayers. With municipalities’ limited budgets and restraints, it’s a huge amount of money that is taken away.”

Numerous constituents expressed concerns over drugs, including the current opioid epidemic and the potential legalization of either medical or recreational marijuana.

“The thing with the drugs, unfortunately, is our nation has an incredible appetite, and unfortunately, it doesn’t matter if you’re rich or poor, it affects every community, whether rural or urban,” Kurtz said.

Both Marklein and Kurtz touted bills passed in the last five years as steps in the right direction to combat drug abuse, but also said more work is needed.

“There’s a lot of things that have been passed, but like a lot of problems it isn’t going to be one bill or one thing, it’s going to be a whole sequence of solutions,” Marklein said.

Marklein voiced support for treatment programs, including in correctional facilities.

“Treatment is always the cheapest alternative, but there’s got to be consequences, because until you’re ready and willing to accept treatment, you’ve got to have that carrot and stick at the same time,” Marklein said.

With Illinois and Michigan now allowing the purchase of marijuana for recreational use, some citizens expressed their fear of Wisconsin following next. Marklein stated he is “at this point opposed” to legalizing marijuana, preferring to take a wait and see approach while observing how the changes effect Illinois.

“I’m going to listen to two groups primarily: law enforcement, because they’re the ones that are going to be impacted, and the medical community,” Marklein said. “There’s no rush to do anything.”

Marklein, whose district stretches to the Illinois border, said an area he is “very, very concerned” with is employees in Wisconsin using marijuana legally in Illinois and then failing work drug tests.

Poor water quality in Juneau County remained on the minds of the attendees at the listening session, which Kurtz said is an area of utmost concern.

Kurtz, who in addition to serving in the legislature owns an organic farm in Wonewoc, said there are about 13 bills either under consideration or nearing proposal that will address water quality.

“One of the bills is best practices with nitrates, like on my farm I do split application with nitrate, and that’s something they are finding more and more is the right way to go because you’re not putting all of the nitrate on all at the same time,” Kurtz said. “Trying to get more cover crops… there is a big potential for that. Another thing I’ve pushed is more county conservation staff.”

While Kurtz is optimistic about the water quality bills, noting two were approved in committee on Feb. 6, he said the state could still do more to address the issue and should take advantage of current programs.

“The Conservation Reserve Enhancement Program… it’s basically to protect waterways, and it provides a buffer strip between the field and stream,” Kurtz said. “The problem with that is the state… there’s over 100,000 acres allocated for that, (and) we only use 36,000 acres, so it’s a big opportunity.”

Correction: A previous version of this article stated there are $100,000 allocated for the Conservation Reserve Enhancement Program, of which $36,000 are used. There are instead 100,000 acres, of which 36,000 are used.