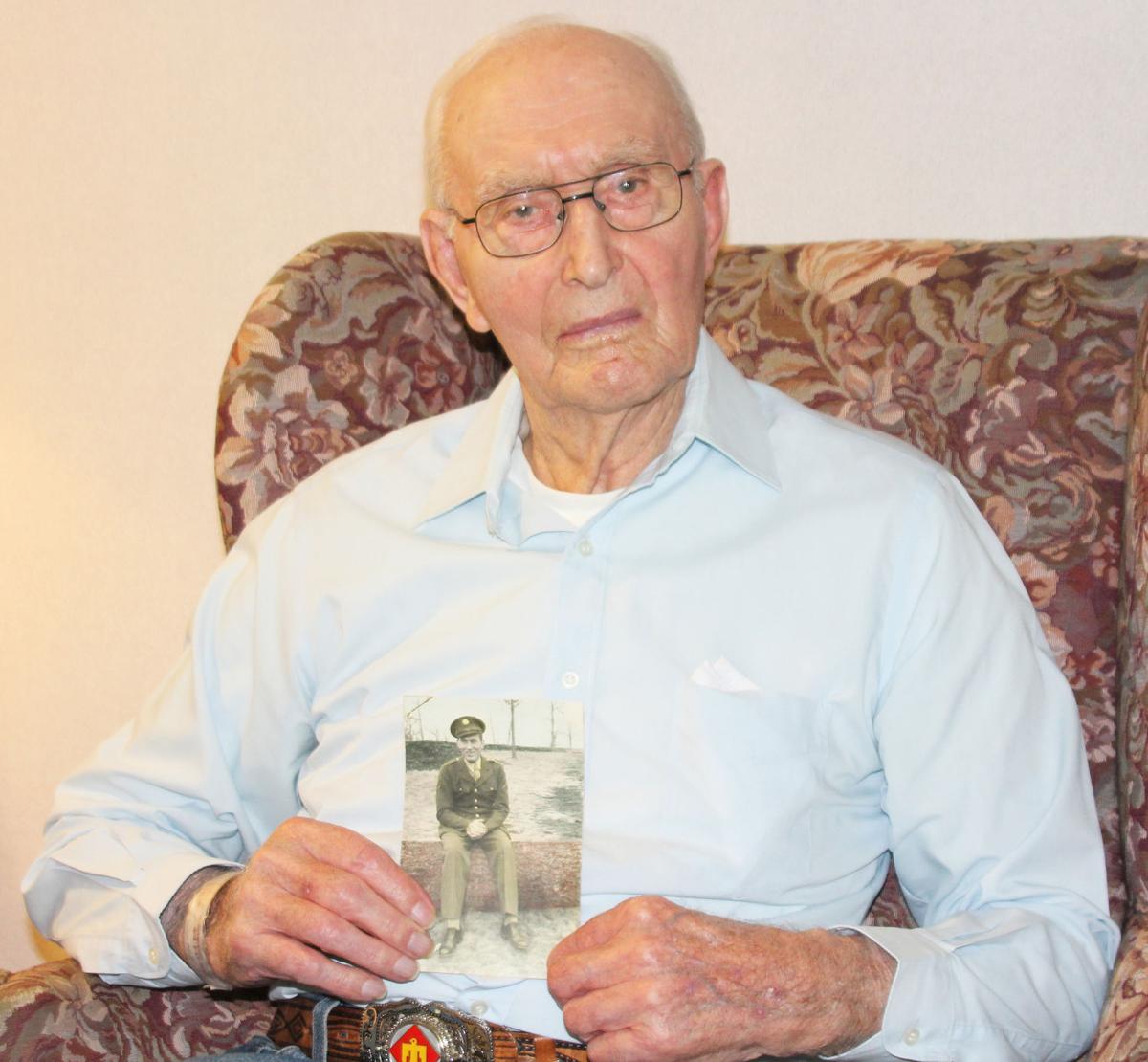 Bob Schultz, of Mauston, holds a photo of him as a young soldier in the early 1940s. Schultz, who turns 100-years-old on Monday, earned a Purple Heart fighting in World War II. 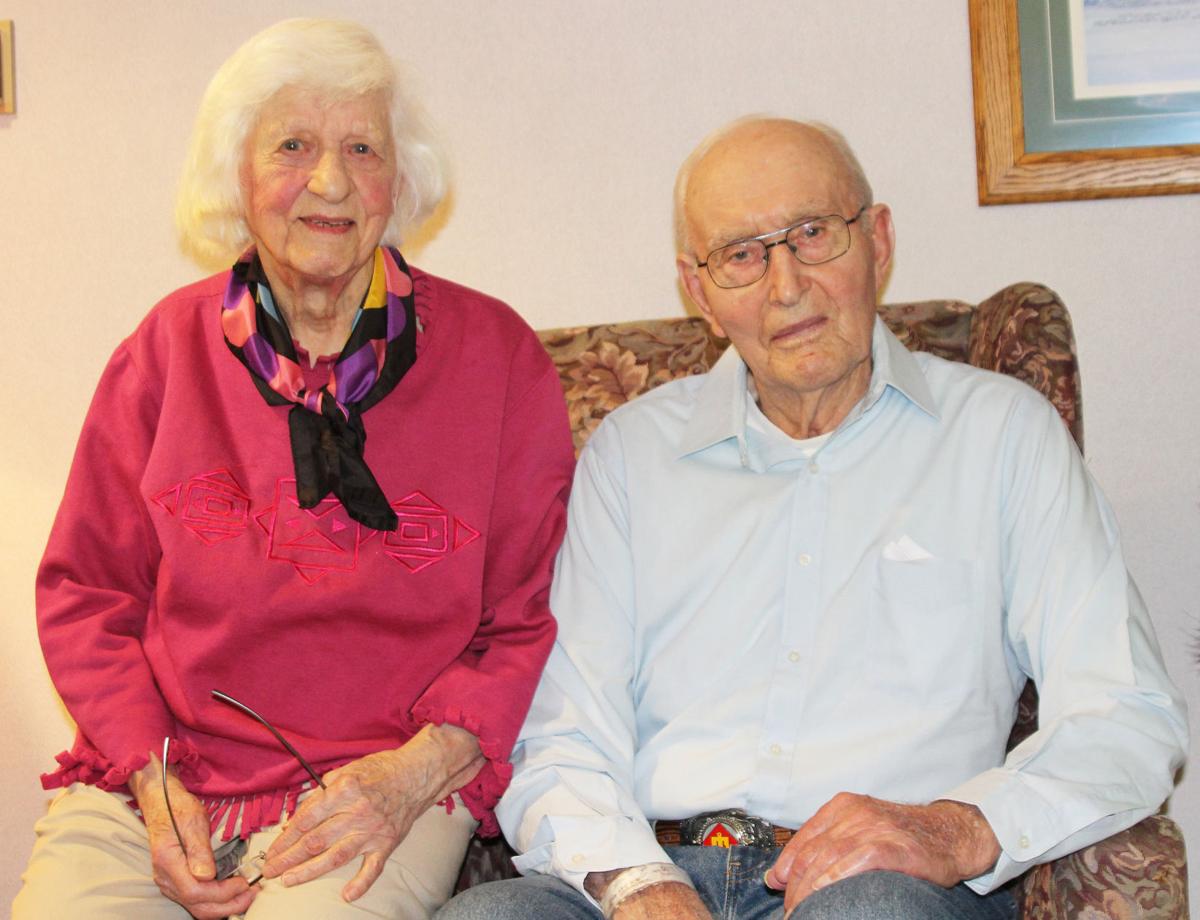 Bob Schultz, right, and his wife, Jennie, met in the early 1940s when Schultz was serving in World War II. The couple lives in the Terrace Heights apartments in Mauston. 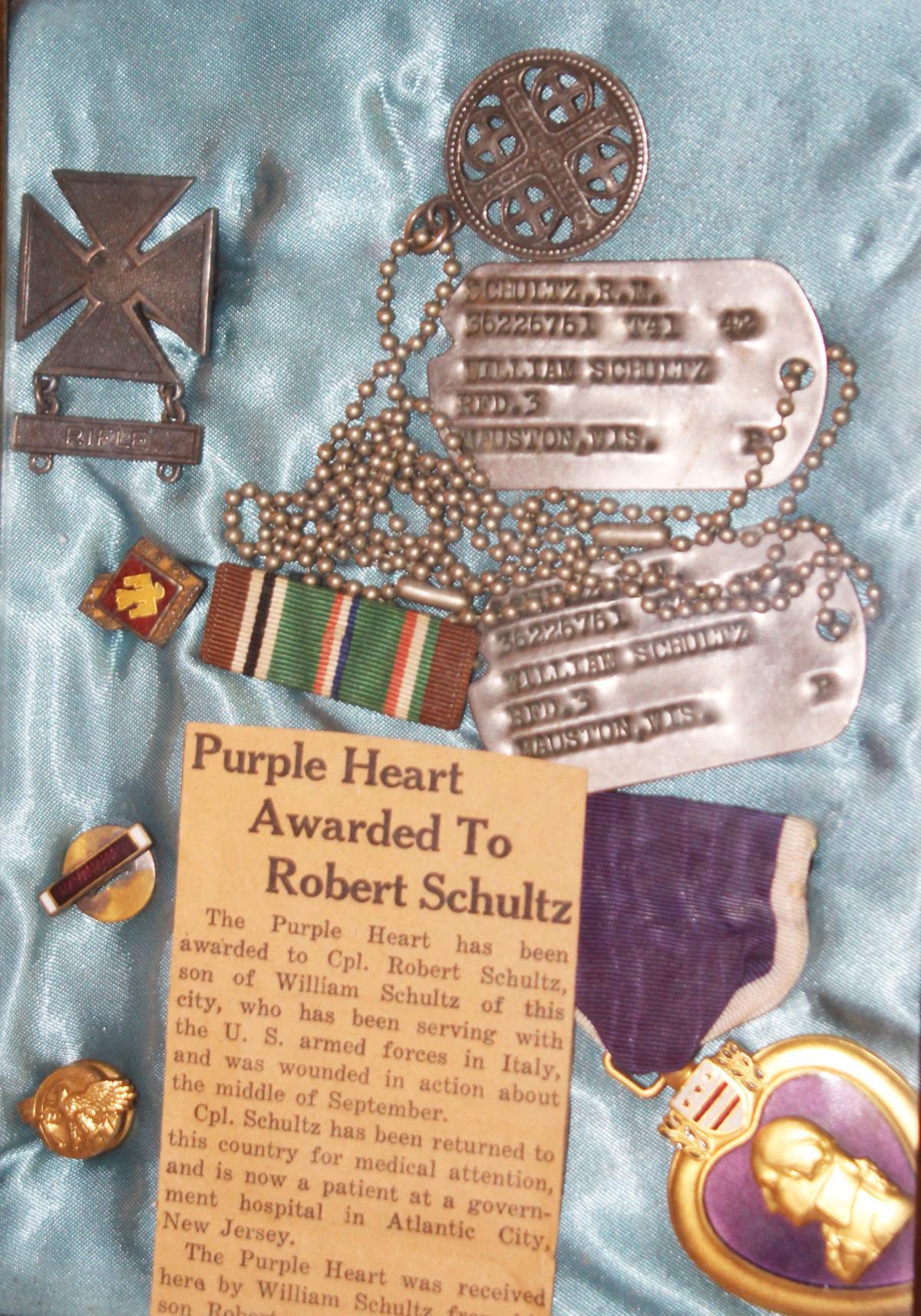 Bob Schultz, who grew up on a farm in the town of Seven Mile Creek, earned a Purple Heart, and several other medals during his service in World War II. 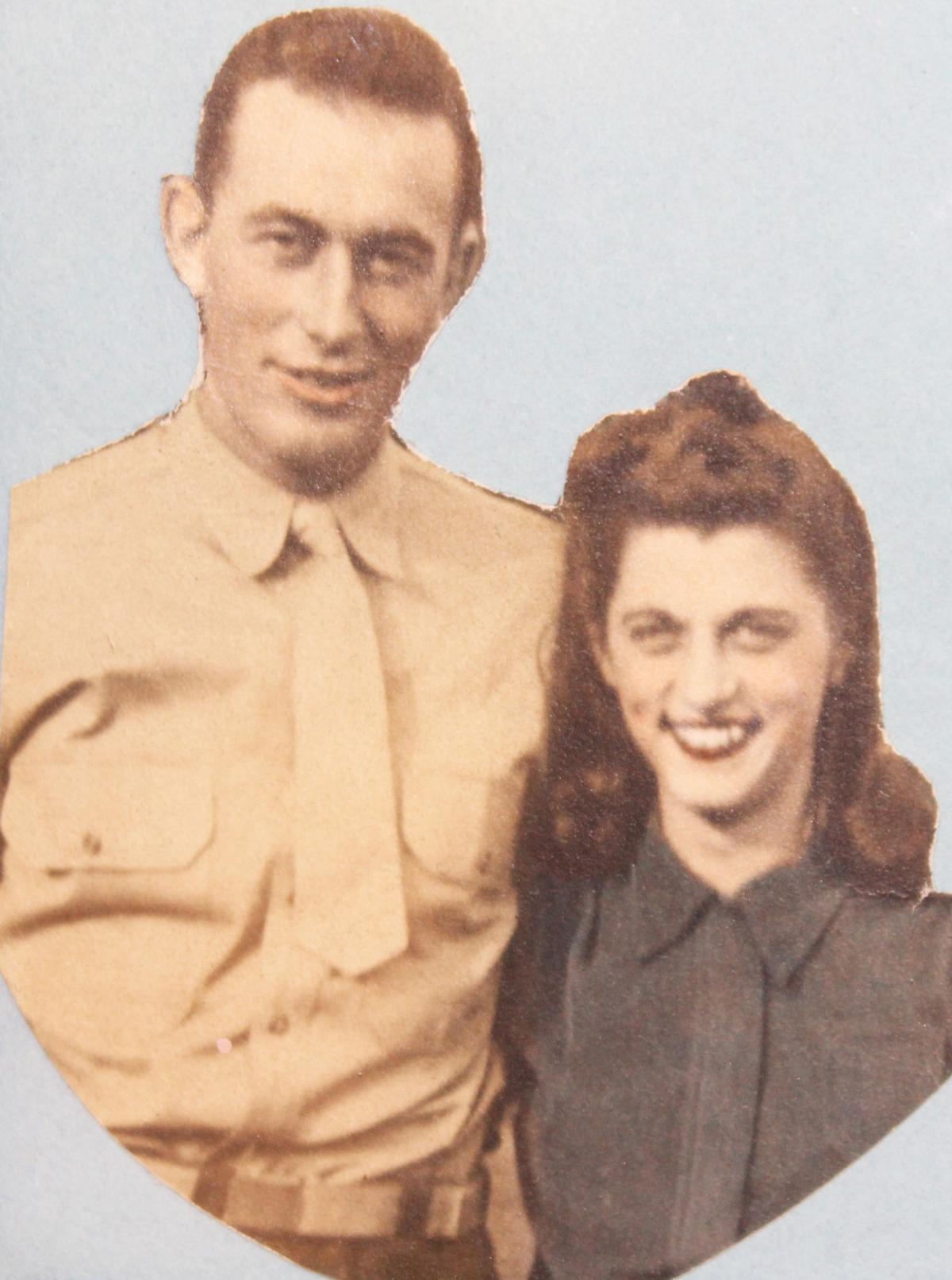 Bob Schultz almost had a long life interrupted when he was wounded on the battle fields of southern Italy during World War II.

Hit by a shell from a tank, Schultz injured his left side while fighting for the U.S. Army on Sept. 23, 1943. Schultz, however, recovered and eventually returned to his native Juneau County. On Monday, surrounded by family and friends, Schultz will turn 100-years-old.

Schultz’s family will hold a special birthday celebration at the Terrace Heights Retirement Community in Mauston, beginning at 2 p.m. Schultz and his wife, Jennie, live at Terrace Heights.

“I’ll have a lot of friends at the party and some that I haven’t seen in awhile,” Schultz said. “I’m really looking forward to that.”

Schultz, born on Jan. 2, 1917, grew up on a farm in the town of Seven Mile Creek. In a family of eight children, he is the last surviving member.

Schultz earned several medals for his service, including the distinguished Purple Heart. Similar to most WWII veterans, Schultz is very humble when asked about his accolades during the war.

“He had an aunt who lived in Milwaukee and she encouraged him to file for a Purple Heart,” Jennie Schultz said.

Schultz registered for the military draft and was inducted into the Army in October of 1941, two short months before the Japanese attacked Pearl Harbor, sending the U.S. into war. Despite facing the unknown of going off to war, Schultz was ready to serve.

“I was ready for something different,” Schultz said. “I was tired of the farm and wanted to do something new.”

After months of basic training, Schultz and his company landed in Sicily, Italy in June of 1943.

“After Sicily, we landed at Salerno. I was only there for 13 days and I was wounded,” Schultz said. “I was hit from a shell and the shrapnel went up pretty much my whole left side. I broke my arm and was in a cast for six months. Luckily, I just had flesh wounds on my leg, but my arm kept me in the hospital for nine months.”

Schultz was hospitalized in Casablanca, Morocco before returning to the U.S. and also recovered at England General Hospital in Atlantic City, N.J. Before ending his military career in 1945, Schultz trained recruits at Georgia’s Camp Wheeler. As an instructor, he was promoted to staff sergeant.

Along with earning a Purple Heart, Schultz was awarded medals for American defense service, good conduct, an American Campaign Medal, and a World War Victory Medal. He was also awarded a ribbon for serving in three theaters (Europe, Africa, and the Middle East), two bronze ribbons for serving in Company B, and one overseas service bar.

“He enjoyed being in the service; he made a good soldier,” said Jennie Schultz. “He would obey and was good at taking orders.”

During his time in the Army, Schultz bonded with fellow soldiers and built a camaraderie he will never forget.

“I really formed some great friendships back in those days,” he said.

Every year, his company holds a reunion in Oklahoma City. Schultz and his wife attended often until recently.

Schultz met his wife in 1942, before heading to Europe. Bob was 25 and Jennie, a Massachusetts native, was 18. In September, the couple celebrated their 71st wedding anniversary.

After the war, the couple rented and operated a farm for six years before returning to the Mauston area in 1954.

Shultz and his wife saved enough money to purchase his father’s family farm. They built a barn and milked about 20 cows. They raised two daughters and lived on the farm for about 50 years.

“When I got to be about 62, I sold the cows and I started fishing,” Schultz said. “I spent a lot of time doing that. I did a little turkey hunting too.”

On Monday, the couple will celebrate a special milestone. Jennie Schultz said anyone interested in wishing Bob a happy birthday can stop in and wish him well.

Bob Schultz, of Mauston, holds a photo of him as a young soldier in the early 1940s. Schultz, who turns 100-years-old on Monday, earned a Purple Heart fighting in World War II.

Bob Schultz, right, and his wife, Jennie, met in the early 1940s when Schultz was serving in World War II. The couple lives in the Terrace Heights apartments in Mauston.

Bob Schultz, who grew up on a farm in the town of Seven Mile Creek, earned a Purple Heart, and several other medals during his service in World War II.