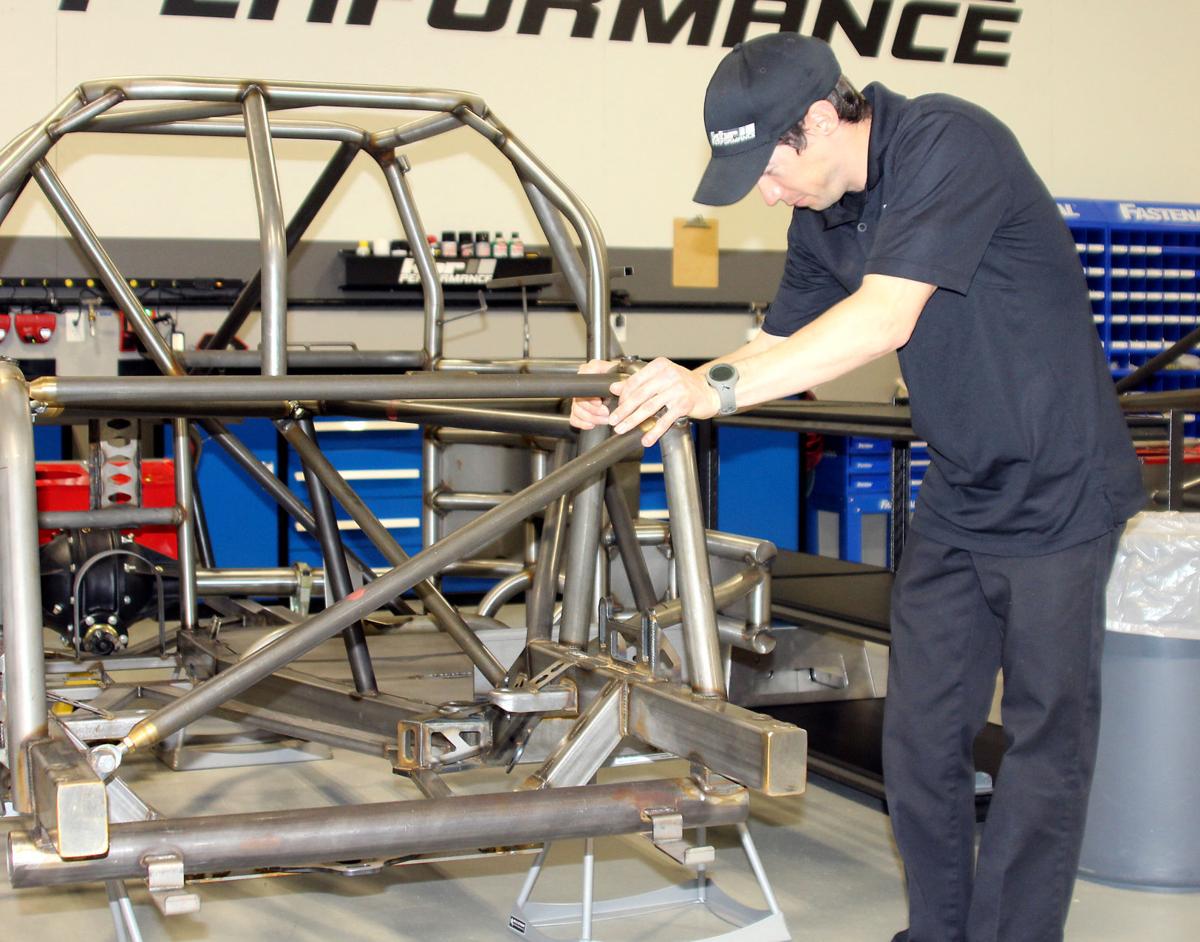 Kelly Bires inspects the frame of a car at his shop in Lyndon Station on Tuesday. Bires opened kbr Performance in the Lyndon Station industrial park earlier this year.

After spending years working for some of the biggest names in NASCAR, Juneau County native Kelly Bires has returned home to help local drivers.

Earlier this year, Bires opened kbr Performance, a shop devoted to building and facilitating stock cars, in Lyndon Station’s industrial park. The facility opened in April and Bires has been busy working on several cars with help from family: niece Madaline, 17, and nephew Abe, 16.

“We started building the facility in January and by April we had our first car in here. It’s funny how fast it went,” Bires said. “By mid-June, we were in the position where we had everything we needed and were fully efficient. But that was tough because it was in the middle of racing season. We were trying to get this place organized and on top of that, build race cars, service customers and get out to the race track. It was a couple of hectic months.”

On Tuesday, Bires, along with members of the Lyndon Station Chamber of Commerce and the village board, held a media session to unveil the shop. For Bires, opening a mini-stock car production plant in Juneau County is a dream come to life. After graduating from Mauston High School in 2003, Bires embarked on his own racing career, competing in the NASCAR circuit from 2007-13. He’s spent the majority of that time in North Carolina, the capital of NASCAR, working for companies owned by Dale Earnhardt’s family and Kevin Harvick.

After experiencing success on the pro circuit, Bires wanted to bring his NASCAR knowledge back to his roots. In the fall of 2015, he approached Lyndon Station Chamber of Commerce Chairman Tom Miller and Village of Lyndon Station President Larry Whaley about purchasing land to develop the shop.

“I met with the board in Lyndon and we were able to put something together really quick, which needed to happen to make this open by April, when the local racing season starts,” Bires said. “When we looked at a map, we found out there are 12-15 tracks within 100 miles of here, so the location was great. To be able to get in here was seamless. For me to move 1,100 miles up here in the middle of doing all of this early building and to be able to function that early, it took all of us working together to get this done.”

“We knew he wasn’t going to be someone to come into the industrial park for a couple years and then move out,” Coley said. “He’s going to be accessible and helpful to people in this area. This isn’t going to be a fly-by-night operation.”

“He’s got big goals and a big agenda and this is just step one,” Miller said. “He sees some bigger things and the village does too.”

About the only thing kbr Performance doesn’t do is build car frames. Bires receives the frame and in about a month, has a new stock car built. The shop also does repairs and has supplies in the store for drivers who need a part on the fly.

“We also do at-track services so we can take a customer who has no crew; a normal guy who has a day job and races at night or on the weekends, he can bring the car here and he can work on it or have us work on it,” Bires said. “We can also provide a pit crew so they have all the mechanics needed to be successful. And we work for pretty much any level, from local stock car racing to the national level. We have the capability to do that.”

Besides large floor space to work on cars, the shop includes an office, bathrooms and a parts store. Bires said one of his goals was to offer fast, reliable service to local racers. If a driver needs a part prior to a Saturday race, chances are his shop will have it. Bires has the ability to ship parts to national circuits in the southern U.S. as well.

“The main goal is to service the everyday racer — at any level — so they can go to the race track at an affordable rate,” Bires said. “Racing is expensive and you need sponsorships to make a go of it, but we can supply the help. We’ve had racers come here who had never been on a race track before and came here to ask for help. Their times got better throughout the year and it was nice to see that progression.”

“We also have the equipment here to do welding, fabricating and to help a person who needs a bolt… Racing is one thing we do, but we can help out anyone,” Bires said. “We can get performance parts for street cars like hot rods. We did everything right from the beginning to be able to do that and we have the opportunity to expand here too.”

Kelly Bires inspects the frame of a car at his shop in Lyndon Station on Tuesday. Bires opened kbr Performance in the Lyndon Station industrial park earlier this year.