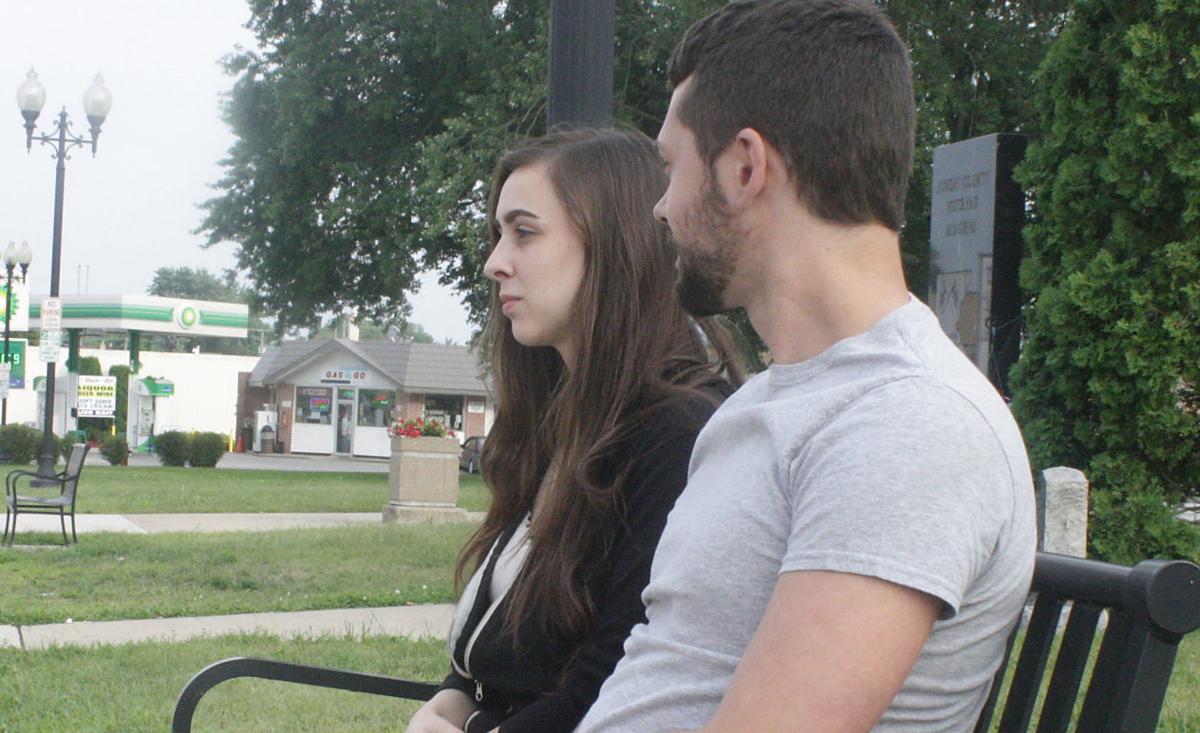 Elizabeth Patton sits on a bench in Mauston with her fiance Ryan Leggett. 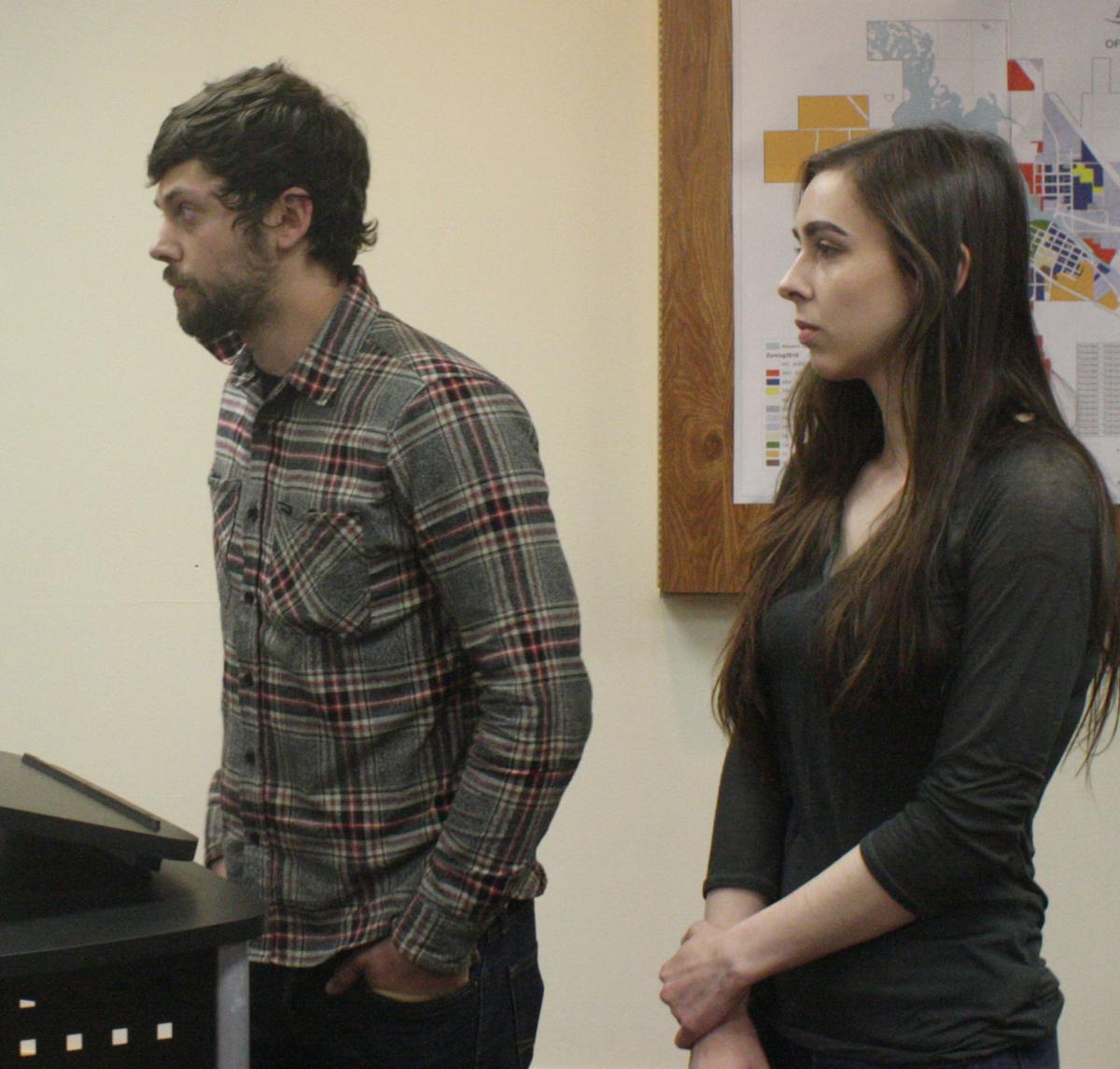 Ryan Leggett and Elizabeth Patton speak at the May 8 Mauston Common Council meeting. 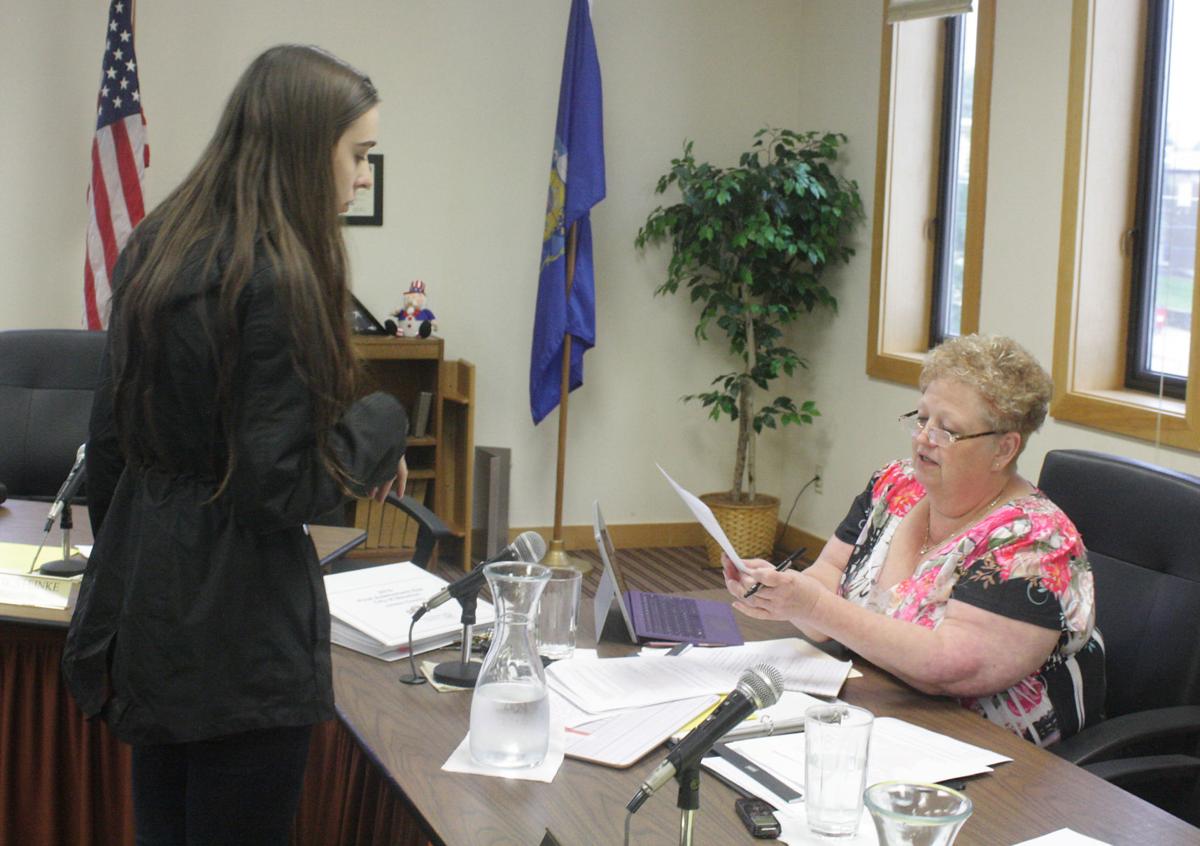 Elizabeth Patton was 13 years old when Michael Patton, her biological father, sexually assaulted her. He was eventually sentenced to prison, but Patton’s ordeal with her offender did not end.

Since being released in December 2017, Patton says her offender has repeatedly driven past her home in Mauston. He lives in the same city, but is prohibited to make any contact with Patton.

“It started out really slow,” Patton said. “At first I wasn’t sure about it, and then I ended up getting his license plate (number) and actually being able to see he was driving by … and then it was like an everyday thing.”

Patton and her fiance, Ryan Leggett, noticed there was a consistency to her offender driving by their home. He would be nearby while they left the house early in the morning.

Leggett said a job commute would be an implausible excuse for driving past their home so regularly.

“It was completely out of his way to go on our street,” Leggett said. The offender even parked outside their house.

Mauston does not currently restrict where sex offenders can live.

Reedsburg’s sex offender ordinance not only prohibits a registered sex offender from living within 1,500 feet of public areas such as parks and daycares, but adds other places where children could congregate and have potential to be unsupervised like movie theaters, golf courses and recreational trails. There are some exceptions. If a sex offender wants to pick up their child from school, they must give written notification beforehand.

He said some registered sex offenders who move to Reedsburg will not be aware of the ordinance.

“There’s been several (instances) where people have moved in and we’ve stopped them at a traffic stop or something like that and they came up in the system as a sex offender and we’ve seen the address,” Becker said. “So if we do come across that we make notification with them and they have 30 days to move and we don’t cite them until they either don’t move or they violate the 30 days.”

Prior to 2007, convicted sex offender Donald Keller, who lives in La Valle, said he didn’t have an issue living in Reedsburg.

“They saw me walking, I let everybody know where I was going from time to time,” Keller said. “I had nothing to hide while I was on probation and they were fine with that.”

When asked why he wanted to share his story, he said he wanted to explain the unfairness he has gone through-from the way people on the street treat him, issues he’s had with the city and trying to find housing in Reedsburg.

“Everybody is allowed to live someplace in a city, village, or town without that harassment,” he said. “I’ve been wanting to talk about it for a long time.”

Because he is on the sex offender registry list, anyone can search for him, so he feels he has nothing to hide. Therapy gave him confidence to speak out about the ordeal he went through after he was convicted of sexual assault on his then 11-year old son in 2004.

It’s an act Keller wishes he had never done.

“When I read my case now it makes me sick,” Keller said. “I just get that sick feeling in the pit of my stomach and I can’t believe that I did something like that.”

Keller was placed on probation for four years starting in 2005. Later, he moved to Reedsburg and stayed at a motel for a year before moving into an apartment complex in the city.

Keller said three months after the ordinance passed, a new management company took over the apartment building. He claims while he was grandfathered into the ordinance and paid his rent on time the company evicted him because “they just didn’t care for a sex offender to be in the building.”

He then moved in with his wife, Melody, after she bought a house on West Main Street in Reedsburg, shortly before they were married for the second time in 2013. Melody Keller said the house was behind the 400 State Trail and close to the movie theater, located on Webb Avenue. Police came knocking on his door about a month later to tell him he had to move out.

He moved back to La Valle where he remained for the past eight years. But now the couple faces a new challenge with finding a place to live after 25 feet of water rushed through the village in late August, leaving Keller and his wife displaced. Since then, they have been trying to find a place to rent in the Baraboo, Prairie du Sac and Portage area to be close to where Melody Keller works at an assisted living facility in Baraboo. However, he said it’s been a challenge to find someone who will rent to him due to his offense.

“Most places will do a background check and of course they will find that I’m still on the registry,” he said.

In the meantime, Keller and his wife have stayed with his aunt in La Valle and has lived temporary in motels, even living out of his van.

“We’re pretty much homeless right now,” he said. “We had to put all of our stuff in a storage unit.”

As of Nov. 19, the sex offender registry lists an address for Keller in Cazenovia.

Keller said he still continues to seek help once and a while when he finds himself in what he calls a “dangerous situation” and will seek treatment right away. He also understands the “triggers” will lead him towards that path.

“If you use those tools they will help you,” Donald Keller said. “But it’s those people that re-offend who are giving the ones that are working on staying sane a bad name so they kind of lump everything into that one pool.”

Based on his experience and reading the ordinance Keller feels he can’t reside in Reedsburg and “once you leave the city you cannot come back to live in the city.”

“As I would understand it, we have both rental and family housing areas that are available in the city,” said Reedsburg City Attorney Derek Horkan.

Becker said Maple Aire Trailer Park on Maple Street as well as a section of residential housing going east out of town on Main Street is where registered sex offenders could live in the city and stay within the 1,500 foot requirements. While he said the housing options are few, it provides them a place to live.

“We were careful when we wrote the ordinance that we didn’t want to be too restrictive, but we also wanted to be restrictive enough that we protected the kids that were supposed to be protected,” Becker said. “The safety of the kids is our first priority that scale will always tip towards their safety and tip away from someone whose been convicted of a crime that would adversely affect that safety.”

Horkan added there isn’t a “bright line rule” that provides a clear answer in describing how municipalities should set up ordinances when it comes to sex offender residency.

“There’s no specific state statute that’s helping us out with that issue,” Horkan said. “Again, it’s a balancing test the municipality has to review.

Patton and Leggett began looking at how other municipalities handle where sex offenders are allowed to live. They discovered the details of Reedsburg’s ordinances on sex offenders and took them before the Mauston common council.

Speaking publicly at a common council meeting, Patton advocated modeling new Mauston ordinances after Reedsburg’s. She hopes to see Mauston agree to legally prohibit sex offenders from living, entering or being present within 1,000 feet of a child safety location.

Patton assumed sex offenders were automatically restricted from living in certain areas like they are in Reedsburg.

“I thought that was just a thing everybody did, because it makes sense,” Patton said.

The possibility of encountering her offender in Mauston has impacted her life in the city, Patton said.

Both Patton and Leggett are highly skeptical of the idea sex offenders who try to change should be treated differently than those who are repeat offenders.

“It sounds like bull___ to me,” Patton said. “It just kind of shows me what a good manipulator they are … Why would you even chance it?”

“It’s really easy not to rape kids,” he said.

Leggett said he feels parents should be outraged every time a child is victimized.

“They’re thinking when they read headlines ‘Thank god that isn’t my child’ and they really need to start thinking ‘How dare that happen to any child,’” he said.

“The victim needs to have more rights than the perpetrator,” McGuire said. “I don’t know exactly which way the ordinance committee is going to lean.”

McGuire said he hopes new changes can begin to be enacted by the end of the year.

Until then, Patton plans to keep advocating change.

“I’d really actually just like to see everybody do something instead of waiting around talking about it,” Patton said. “This is their job: to keep the city safe.”

Reedsburg’s sex offender ordinance will now require offenders to keep a distance of at least 1,250 feet from child safety zones instead of 1,5…

Elizabeth Patton sits on a bench in Mauston with her fiance Ryan Leggett.

Ryan Leggett and Elizabeth Patton speak at the May 8 Mauston Common Council meeting.