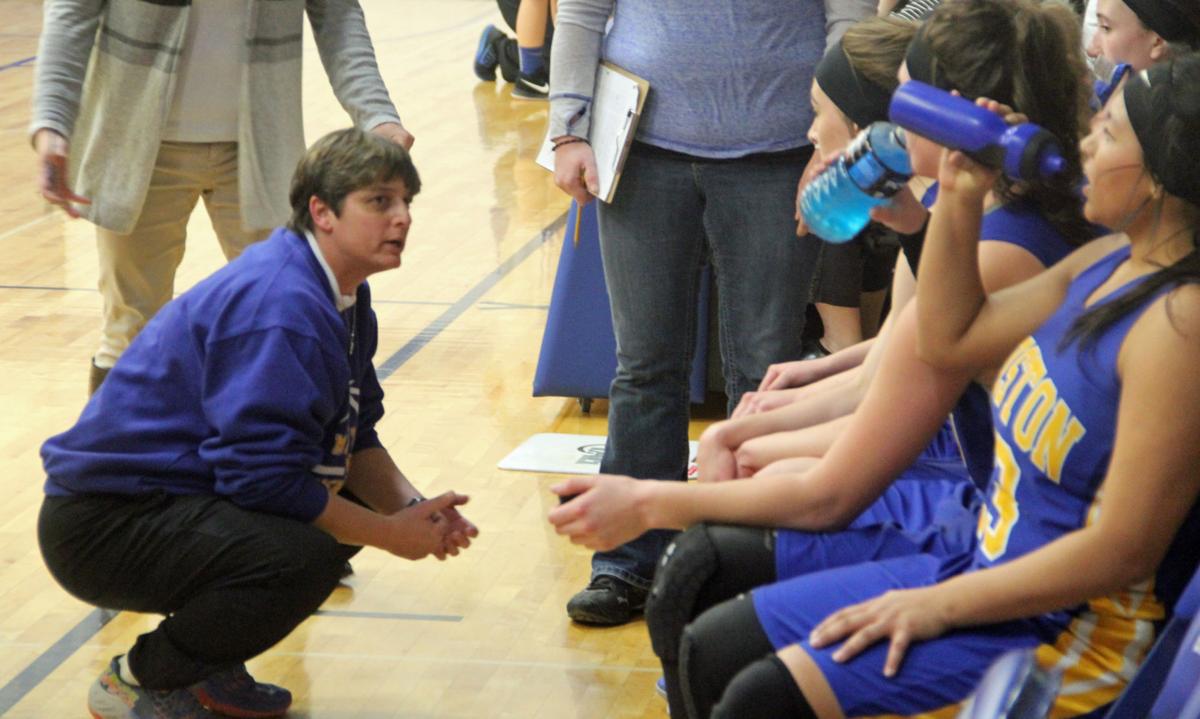 Though its struggled in recent years, Mauston saw success early in former head coach Lori Hammer's tenure, including posting winning records during the 2011-12 and 2013-14 seasons. 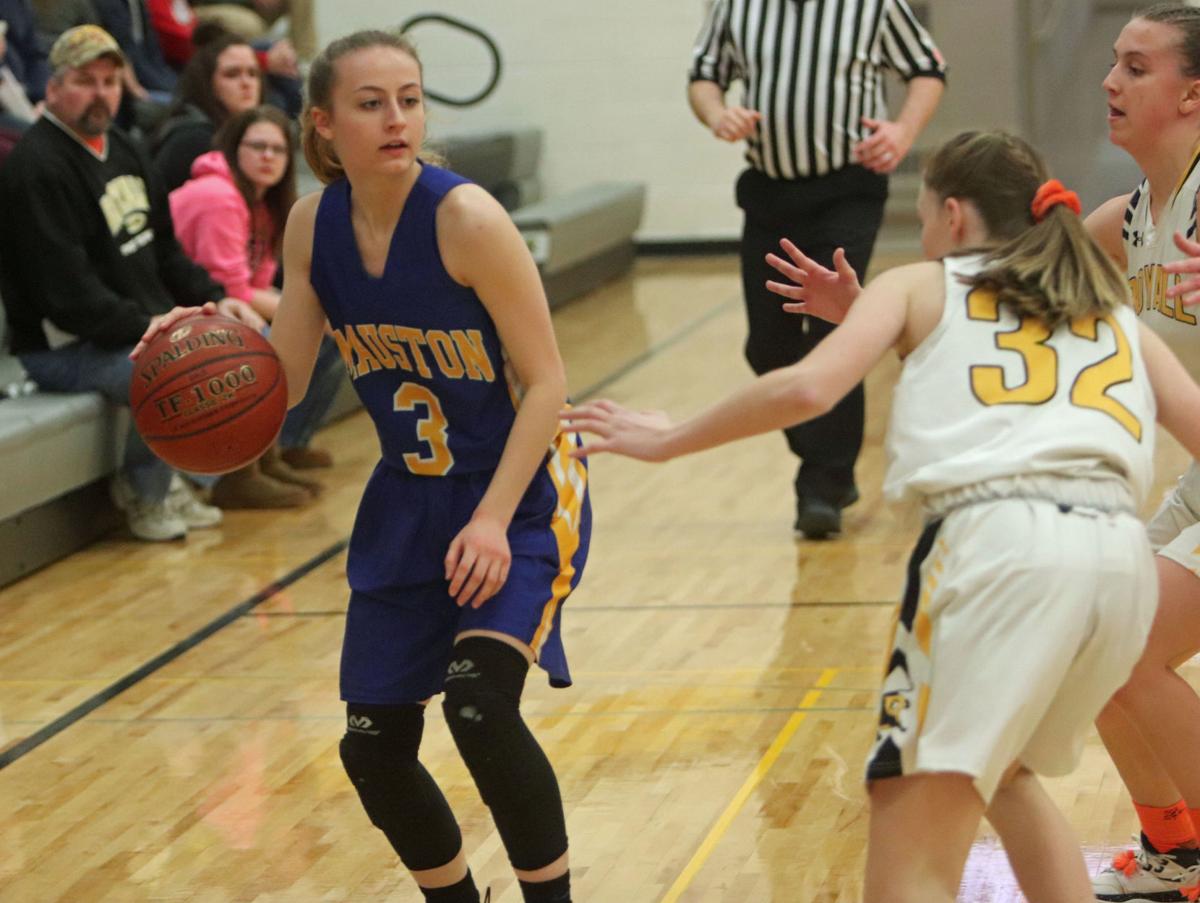 With youngest daughter Ruth, left, graduating this spring, Lori Hammer felt it was the right time to step aside so she could spend more time watching her son play basketball during the winter.

Lori Hammer always figured her time as head coach of the Mauston varsity girls’ basketball program would end around the time her daughters were done playing basketball for the Golden Eagles.

First came Grace, who graduated from Mauston High School in 2018. Next up was Ruth, who graduated this past spring. With both daughters done at Mauston, Hammer felt this was the right time to step aside.

“I think it’s something I had always said I would do,” Hammer said. “I had two daughters that played through the program and I always said if they stopped playing or when they were done playing, that would probably be the time I would step away.”

Hammer’s decision to step down certainly isn’t due to any fading love for the sport of basketball or the position. Instead, it was made in large part due to her desire to spend more time watching her son Joe, who just finished his freshman year at Mauston High School, play basketball during the winter and to be able to visit her college-age daughters more often.

“Just to be able to watch him as he continues to play basketball — it’s really hard with the way the schedules go. I miss a lot of his stuff, so I think it was something I had always said I would do so I would be able to (watch him),” Hammer said. “Both of my girls will be gone at school, so just to be able to go see them and spend time with them. (Basketball) is kind of a long season and falls through a couple holidays, so I think it was just the right time in our lives for me to step away and spend more time with family.”

Hammer spent 12 years as head coach of the Golden Eagles after taking over for long-time head coach Randy Fabian when the latter stepped down following the conclusion of the 2007-08 season. Hammer had spent some time as an assistant before assuming the reins of the program for a total of nearly two decades coaching basketball.

In Hammer’s 12 seasons at the helm, Mauston compiled an 82-190 overall record with a 34-86 mark in South Central Conference play. The first half of her tenure featured some real bright spots for the program, including a second-place finish in the conference standings during the 2010-11 season and winning records during the 2011-12 and 2013-14 campaigns.

In recent years, wins have been tougher to come by for the Golden Eagles. This past season in particular was tough sledding for Mauston, as it endured a winless campaign. Despite the lack of wins during the 2019-20 season, the year and that group of players were emblematic of what Hammer will miss most about coaching.

Hammer also expressed her gratitude to all those who helped her along the way and is thankful for those relationships she formed. She singled out Kim LaVold, her assistant coach who is also stepping down, long-time bookkeeper Tricia Demmin and athletic trainer Jason Nuttall among this group of people she got to know and work with closely.

After Hammer informed Mauston athletic director Randy Gyllin of her intention to resign at the end of the school year, Autumn Miller was selected as her successor.

Miller is a native of Roscoe, Illinois and graduated from Harlem High School in 2012, where she was a three-sport athlete and a team captain in track and field, basketball and swimming. She was particularly prolific in track, earning a scholarship in the sport at the University of Minnesota.

At Minnesota, Miller majored in sports management with coaching and leadership minors. She later attended the University of Wisconsin–La Crosse, where she majored in physical education and was a two-time Division III All-American as part of the school’s track and field team.

Miller is currently a physical education and health teacher at Mauston High School, a position she’s been in since the 2018-19 academic year. She already serves as a coach for the Mauston Area Swim Club and the high school track and field team, so adding coaching basketball to her plate felt like a logical next step.

When the positioned opened up, Miller said she had a handful of players encouraging her to apply for the job. Now that she’s landed the new gig, she’s focused on getting everyone to buy in and making small steps as they look to improve the program’s fortunes.

“Getting the girls to buy into the program is going to be fun to see over time,” Miller said. “When you’re not successful, you tend to not have as much fun. So it’ll be about taking little successes along the way and hopefully they enjoy their experience.”

Though its struggled in recent years, Mauston saw success early in former head coach Lori Hammer's tenure, including posting winning records during the 2011-12 and 2013-14 seasons.

With youngest daughter Ruth, left, graduating this spring, Lori Hammer felt it was the right time to step aside so she could spend more time watching her son play basketball during the winter.