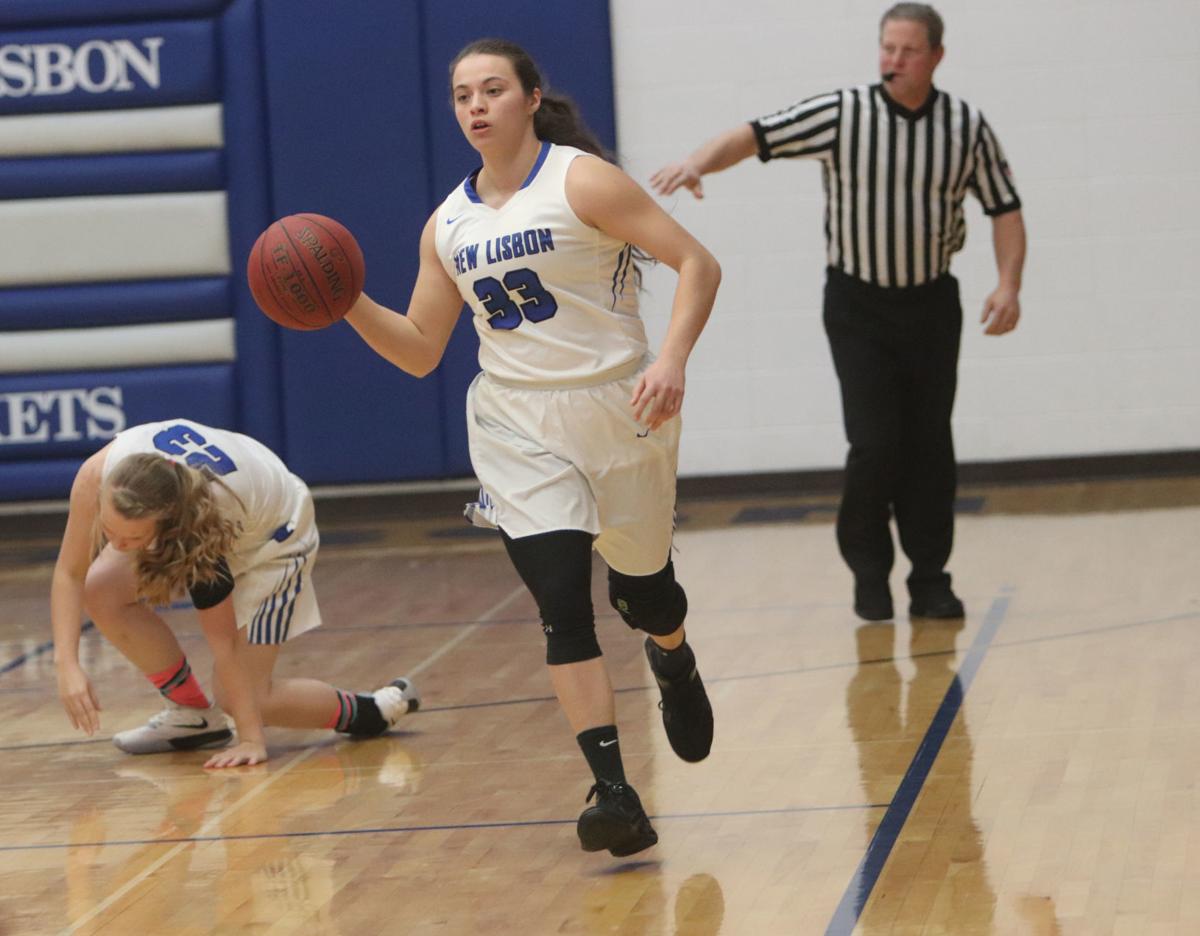 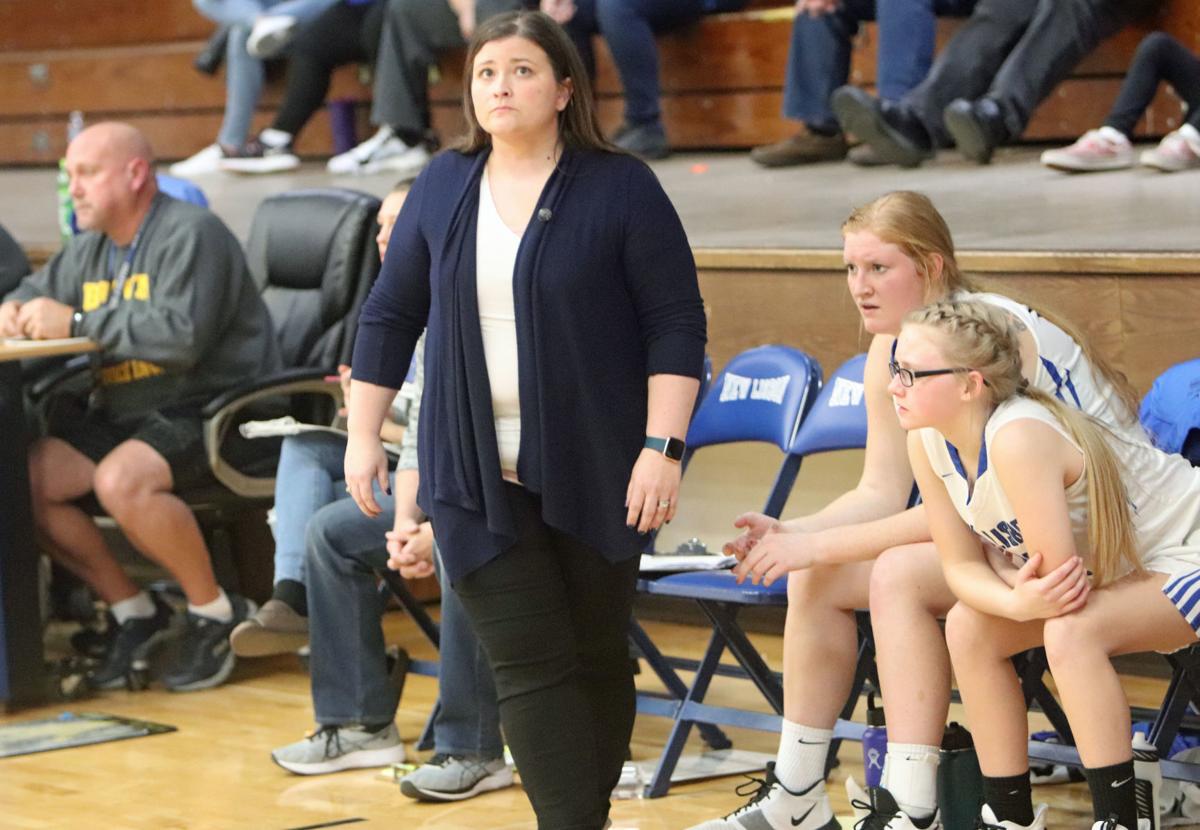 The New Lisbon Rockets are off to a strong start under new head coach Tasha Ragan, storming out to a 4-0 record over the first two weeks of the year.

New Lisbon senior point guard Mya Delgado entered the year needing just 65 points to join the vaunted 1,000-point club. Before the calendar even flipped to December, she had already reached that milestone.

In the Rockets’ third game of the season, Delgado surpassed 1,000 points for her career as part of a 22-point performance against Coulee Christian/Providence. Delgado is averaging 24.8 points through four games to help fuel the Rockets to a 4-0 start under first-year head coach Tasha Ragan.

Mauston 41New Lisbon jumped out to an 11-point halftime lead and never looked back on its way to a 25-point win over Mauston.

The Knights (2-1) seized a double-digit lead that they would never relinquish in a 46-23 win over Necedah (2-1) Tuesday, November 26 in Onalaska. Luther led 19-9 at the half and proceeded to outscore the Cardinals 27-14 in the second half.

For the Knights, Cassie Warren and Grace Manke each scored 11 points and Hannah Matzke added 10 point of her own. For Necedah, Kyra Saylor and Gabby Wilhorn finished with seven and six points, respectively.

Wonewoc-Center came up agonizingly short of its maiden win of the season in a non-conference road loss to Ithaca.

The Bulldogs (1-4) narrowly escaped with a 55-52 win over the Wolves (0-2) in a dramatic game Tuesday, November 26 at Ithaca High School in Richland Center.

Mauston couldn’t overcome a double-digit deficit at halftime in a loss to rival Tomah.

The Timberwolves (1-2) built up a 23-13 lead at the half on their way to a 39-26 road win over the Golden Eagles Tuesday, November 26 in Mauston. Tomah’s Lexi Spears scored a game-high 16 points and Ella Plueger added 10 points.

No Mauston player finished the night with double-digit scoring. Bridget Gunter and Samantha Kobylski tied for the team-high at six points, with Gunther also adding 11 rebounds.

New Lisbon senior guard Mya Delgado entered the night needing only 11 points to join the 1,000-point club. She reached it with ease.

Delgado tallied 22 points to go along with 12 assists and 8 rebounds as the Rockets hammered Coulee Christian/Providence (0-1) 57-26 Monday, November 25 at Coulee Christian High School in West Salem to improve to 3-0 on the season.

It took a heck of second-half rally, but the Panthers escaped their non-conference clash with Kickapoo with their unbeaten record still intact.

Necedah moved to 2-0 on the season with a double-digit non-conference win over Seneca.

The Cardinals turned a 19-18 halftime lead into a 38-27 final score thanks to a stellar defensive effort in the second half against the Indians (0-1) Thursday, November 21 in Necedah.

A seven-point halftime lead proved to be all the Rockets needed against Port Edwards.

New Lisbon led 28-21 at the half and held on for a second consecutive win to open the season by besting the Blackhawks (0-4) 55-48 Thursday, November 21 in Port Edwards.

Mya Delgado finished the night with 25 points and Morgan Sanders added 15 points to set the pace for the Rockets. Port Edward’s Taylor Martin led all scorers with 30 points on the night, but no other Blackhawk player finished in double digits.

Though they didn’t get the win, the Golden Eagles put forth a much stronger effort in their second game of the season.

On the heels of a 42-6 season-opening loss to Necedah, Mauston improved but still came up short in a 46-34 loss to Weston (1-0) Thursday, November 21 in Cazenovia.

Mauston Bridget Gunther posted a double-double with 15 points and 10 rebounds, but no other Golden Eagles scored more than four points on the night. For the Silver Eagles, Ella Spencer, Mattie Bulin and Laurissa Pickel finished with 10 points apiece.

The Wolves failed to get much of anything going in a season-opening loss at the hands of the Panthers.

Kickapoo breezed to a 61-25 win over Wonewoc-Center in a non-conference matchup Thursday, November 21 in Viola. No Wonewoc-Center player reached double-digit scoring on the night.

The Tasha Ragan era at New Lisbon began with an emphatic non-conference win over Pittsville.

The Rockets stormed out to a double-digit lead and never looked back on their way to a 71-42 blowout victory over the Panthers (0-4) Tuesday, November 19 in New Lisbon. Mya Delgado led the way for New Lisbon with a game-high 29 points. Teammates Morgan Sanders and Megan Froh added 15 and 13 points, respectively.

For Pittsville, Julia Redmond led the way with 11 points and Emily Carlson had 10 points.

The Panthers kicked off their 2019-20 campaign with a sizzling first half on their way to a season-opening win.

Royall junior forward Jessica Brueggeman set the pace for the Panthers with a game-high 16 points in the win. For La Farge/Youth Initiative, Hayden and Maddy Benson scored 12 points apiece to lead the way.

The New Lisbon Rockets are off to a strong start under new head coach Tasha Ragan, storming out to a 4-0 record over the first two weeks of the year.