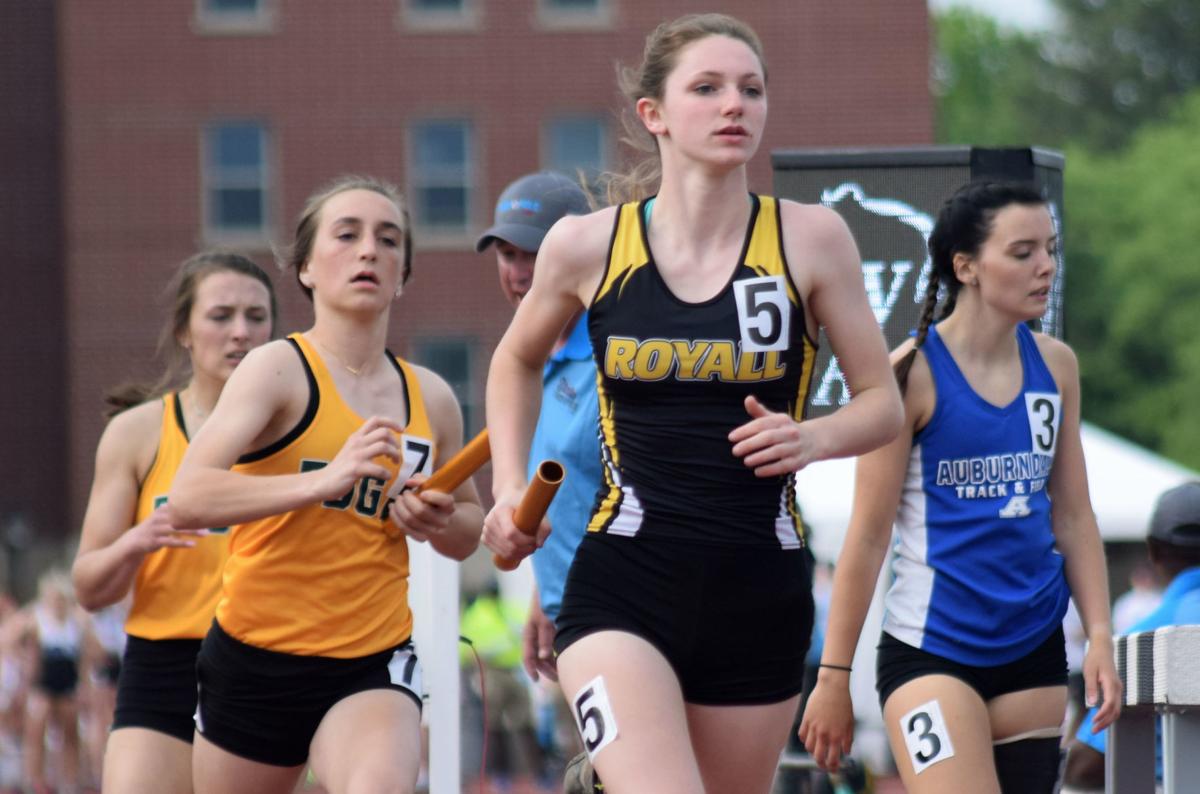 Royall's Jessica Brueggeman takes off on the final leg of the Division 3 girls 1,600-meter relay on Day 2 of the 2019 WIAA state track and field meet at Veterans Memorial Field Sports Complex at UW-La Crosse. 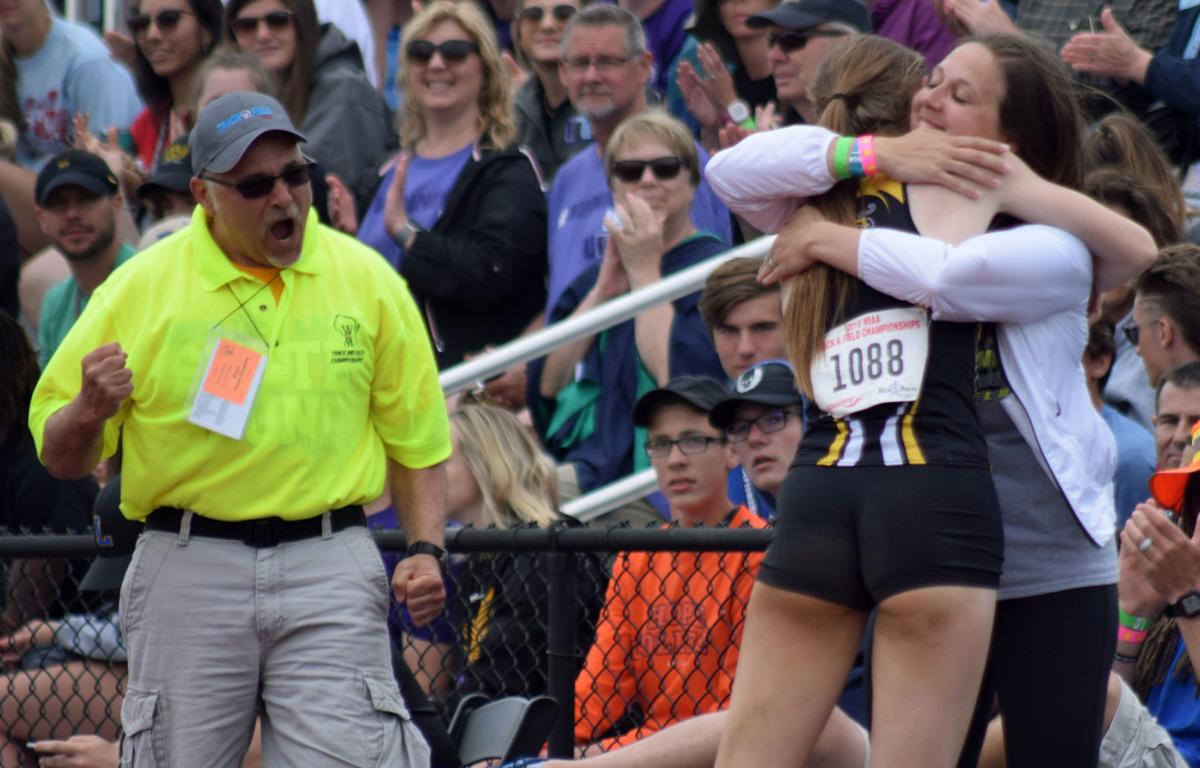 The loss of the 2020 spring sports season was devastating to many coaches, athletes and parents. It was a particularly painful blow for a Royall track and field team in the middle of a golden age of sorts for the program.

Anchored by a talented group of class of 2021 athletes, the Panthers have seen a considerable amount of success recently. The crowning achievement so far came during the 2019 state meet in La Crosse.

At that 2019 state meet, the Royall girls placed third overall among Division 3 teams with 30 points, narrowly behind first-place La Crosse Aquinas (36 points) and second-place Edgar (33 points) in the final standings.

The stellar overall performance was led then-sophomore Jessica Brueggeman, who had finished second in both the Division 3 girls’ long jump and triple jump as a freshman in 2018. She made a tremendous leap (both literally and figuratively) in her second career state meet showing.

Brueggeman’s performances netted her a pair of gold medals — along with her name in the record book — and her team 20 points in the standings. But the Panthers weren’t done there.

Emma Gruen notched another six points for Royall with a third-place finish in the Division 3 girls’ high jump and also took ninth in the 100-meter hurdles. Additionally, Brueggeman and Gruen were part of a relay team alongside classmates Madeline Wainwright and Tenley Wopat that qualified for state in two different events.

That relay team has raced together since their days in middle school and have forged a tight bond over that time. Their continued improvement each year has wowed their coaches.

“They’re all juniors this year and they all keep surprising us (coaches) in a good way,” said Royall head track and field coach Brian Knudtson. “They’re all competitive, they all work really hard in the offseason and really encourage one another. It’s so helpful for all of them to have that camaraderie.”

The Panthers’ other four points during the meet came courtesy of a fifth-place showing in the 1,600-meter relay. However, they also felt like they left some points off the board in the 400-meter relay.

After finishing fourth in the preliminary round, a botched handoff in the finals led to them falling into ninth and failing to accrue any points. Had they held their ground and taken fourth in the 400-meter relay finals, they would’ve finished in second with 35 team points — just one point behind state champion Aquinas.

Given that they had just finished third at state with participants that were all sophomores at the time, expectations were naturally sky high for Royall heading into this spring. Before everything was shut down, the Panthers did get in one week of practice and the early returns only reinforced their belief that something very special for the program could be in store.

“My sprints coach, he keeps a lot of data — he writes down, he times them in the 40,” Knudtson said. “When we had a week of practice this year, he went through and did that and he comes to me and says ‘these four girls, they’ve gotten faster in the 40.’ They were primed and ready to go. This was going to be the season, that’s what I was thinking.”

Of course, Royall’s legitimate hopes of winning a team state championship were dashed by the global coronavirus pandemic, leaving them to wonder what could have been in 2020 and with an even more intense focus on 2021.

Though Brueggeman plays several sports for the Panthers, track is her favorite and her best. She admits she feels the pressure heading into every track season, and that pressure to perform at an ever-increasingly high level only grew after her record-breaking performance at state last spring.

But she and her teammates were amped up and ready to roll as they looked to continue to improve and reach the lofty expectations they set for themselves. Brueggeman concedes it was difficult to come to grips with the lost opportunity when they realized there would be no dream season — or a season at all — this spring.

“It is very hard to come to terms with, I will admit that,” Brueggeman said. “It is tough. Track is obviously my favorite sport, but it’s more than just the sport itself. There’s no other activity that I can do that gives me the feeling that track does. It’s the only sport where you get your competitors coming up to you and saying ‘hey, great job’ and ‘hey, this is awesome.’ It’s just so supportive.”

Brueggeman doesn’t have a set of weights or a treadmill at her home out in the country, but she’s finding ways to continue to do exercises to stay in shape during the pandemic. Working on a farm helps her in that regard, and Brueggeman says she’s taking advantage of the hilly terrain near her house by biking frequently.

The silver lining for Brueggeman and her teammates is that they still have one more year of high school left, unlike the many seniors who saw their high school careers come to an unceremonious end this spring.

Great things could still lie ahead for the Royall track program, though Brueggeman would simply be thankful for a chance to be reunited with her teammates.

“It’s one thing to play basketball when you have 13 girls on a team,” Brueggeman said. “It’s another thing to put you in a relay having four girls. The bond is just so much tighter and it’s such a different environment. I really miss that about it.”

Royall's Jessica Brueggeman takes off on the final leg of the Division 3 girls 1,600-meter relay on Day 2 of the 2019 WIAA state track and field meet at Veterans Memorial Field Sports Complex at UW-La Crosse.