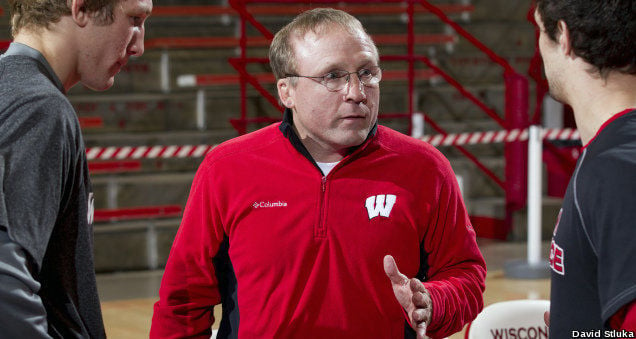 Barry Davis spent 25 seasons as the head coach of the Wisconsin Badgers wrestling program before stepping down from that position in 2018. 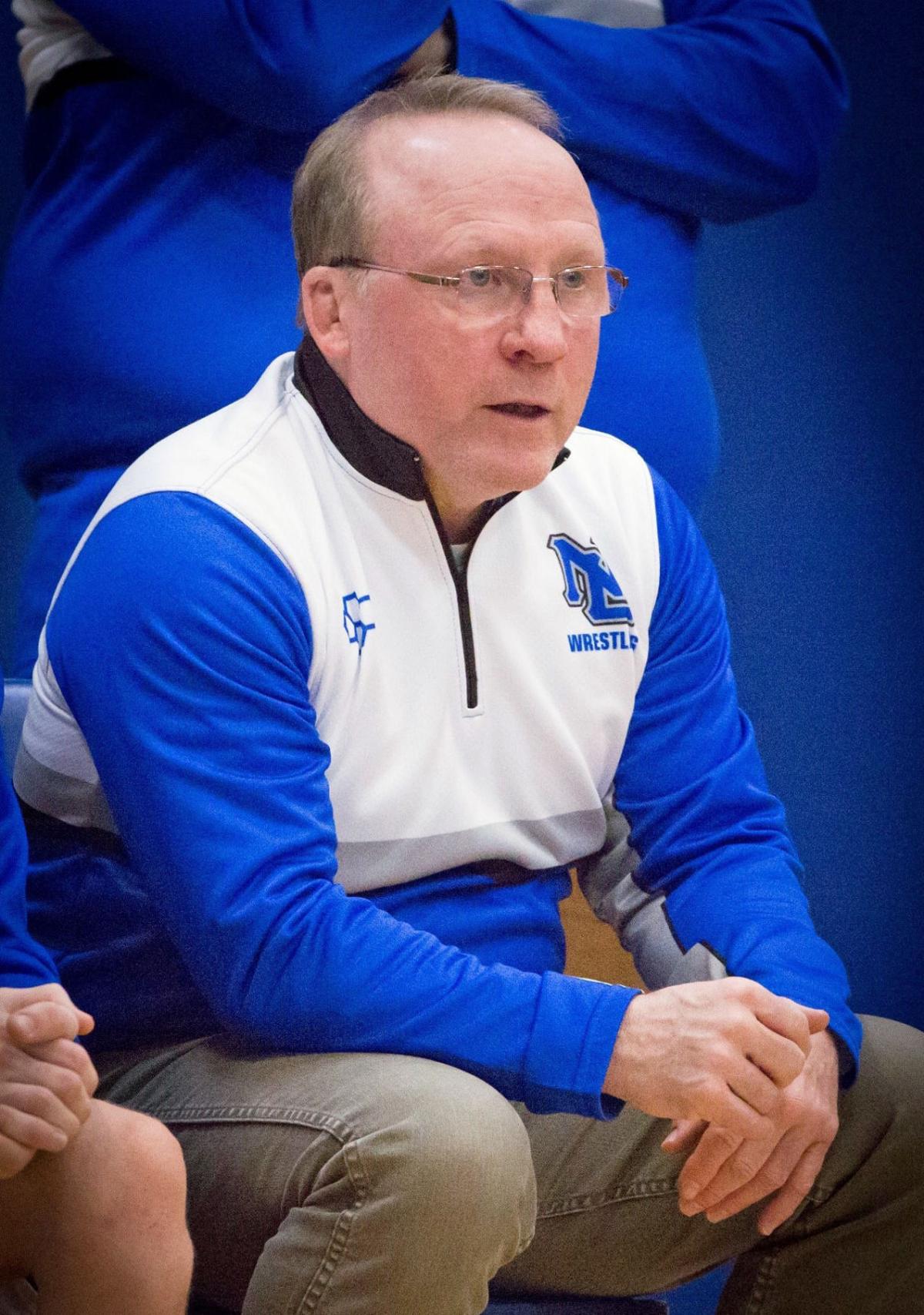 Barry Davis now works as a volunteer assistant for the New Lisbon wrestling program, serving under head coach Brian Slater, who wrestled for Davis with the Badgers.

Barry Davis has accomplished just about everything there is accomplish in the world of wrestling.

During his lengthy, illustrious career as both a wrestler and a coach, Davis has piled up a surefire Hall of Fame résumé.

In high school, Davis was a three-time state champion before moving on the wrestle at the University of Iowa under legendary coach Dan Gable. Davis was a four-time NCAA All-American and racked up three NCAA titles during his college career and still owns the Hawkeyes’ career wins record — no small feat at a program that has won 23 team NCAA championships over the years.

Davis’s wrestling success continued on to the international stage. He was a silver medalist at the 1984 Summer Olympics in Los Angeles and captured gold at the 1983 Pan American Games in Caracas, Venezuela. Davis also competed at the 1986 and 1987 World Wrestling Championships, winning a bronze and silver medal, respectively.

His passion for wrestling carried him to the coaching ranks, where he initially worked as a graduate assistant and then an assistant at his alma mater under Gable. Davis eventually made the move to Madison, becoming the interim head coach of Wisconsin Badgers wrestling for the 1993-94 season before serving as the program’s permanent head coach for another 24 years after that.

His quarter-century-long tenure in Madison saw hundreds of wrestlers pass through the program under his watch. Among them was current New Lisbon head wrestling coach Brian Slater, who himself was one of the most decorated athletes in Wisconsin high school wrestling history with the Rockets.

Slater won individual state championships during all four years of his high school career from 1993 to 1996. At the time, he was just the third high school wrestler in Wisconsin history to become a four-time state champion (15 more athletes have matched the feat in the years since).

“Just about everything he said he was going to qualify for and accomplish, he did,” said former New Lisbon head wrestling coach Bud Olson. “If you put a lot of time and a lot of effort into something and if you have a little talent too to help out, you can go quite a ways.”

When it came time to pick a college to continue his wrestling career at, Slater’s first interest was going to Iowa to wrestle under Gable. According to Olson, Gable was forthright with Slater, admitting that he planned on retiring in the near future and wouldn’t be around until the end of Slater’s college career. Gable retired from Iowa in 1997.

Instead, Gable recommended that Slater consider taking a look at Davis and Wisconsin.

Slater did meet with Davis and the coach paid a visit to New Lisbon during the recruiting process, during which the two formed an immediate bond.

“(Davis) came up and visited me here at school. He actually beat me in a game of HORSE during phy ed class,” Slater said. “I went down and toured and I decided to head down there. We just kind of had a connection right away.”

Slater admits that the leap to college was a difficult one for him. Not only was he a kid born and raised in a small town heading to a much bigger city in Madison, but he also made the huge leap from Division 3 high school wrestling to competing in Division I Big Ten wrestling.

Soon enough, the sport that was such an integral part of his life suddenly didn’t bring the same sort of joy it once did.

“It was different. It was tough. For me at that point in my career, I guess I didn’t enjoy competing as much as I used to,” Slater said. “I still loved to work out and loved the workouts. It’s hard to say. I just didn’t have that where I wanted to compete still. That’s why I eventually ended up hanging it up after two and a half years.”

Before officially leaving the Badgers wrestling team, he spoke with Davis about it, who promised to support Slater no matter what he decided.

“I went and talked to Barry about it, and Barry understood me as a person,” Slater said. “He was worried about me as a person more than as an athlete. He said ‘if that’s what you think is right, I stand behind you. If you think you made the wrong decision, there’s always a spot open for you.’”

After moving back to New Lisbon with his wife, Hollie, Slater initially had no interest in involving himself in the coaching ranks despite several people, including then-athletic director Mark Kopplin, attempting to persuade him to do so. Eventually, his former strength and conditioning coach, Lynn Ormson, said something that resonated with him and helped convince Slater to give coaching wrestling a try.

“(Lynn) said something that hit home,” Slater said. “He said ‘Brian, why would you waste what you have and not give it back to others?’ That still sticks with me. And if it wasn’t for Mark Kopplin coming in and seeing me and trying to push me to get to do it, I don’t know if I would’ve ever done it.”

Once he was convinced, Slater became the head wrestling coach at his alma mater and continues in that role two decades later.

Davis and Slater remained on excellent terms over the years and Slater would occasionally consult his former coach if he had questions about what to do in his role as coach of the Rockets.

In more recent years, as Slater’s son, Bailey, began wrestling for the New Lisbon high school team, Davis would frequently visit New Lisbon practices to offer assistance. This was his first foot in the door for his current role as a volunteer assistant with the Rockets.

Davis ultimately decided to step down from his position with the Badgers in 2018, citing a desire to spend more time with his family after more than three decades as both an assistant and head coach at the Division I collegiate level.

“I spent a lot of time on the road, a lot of time away from my family. It was nice to spend time with family and slow down a little bit,” David said. “It’s a 24/7 job. You’re recruiting, you’re dealing with athletes that are away from home — you have to deal with those situations. There’s a lot more that goes on than just coaching in the room. There’s things out of the room you’ve got to take care of as well.”

Leaving his position with Wisconsin certainly didn’t mean an end to his relationship with the sport that is an integral part of his DNA. On the contrary, Davis believes strongly in “giving back” to others in a sport that he says opened so many doors for him throughout his life by doing the same for them.

“Wrestling taught me a lot in life. It gave me a lot of opportunities and opened a lot of doors for me as a person,” Davis said. “It’s about giving back and changing lives of young people and giving them an opportunity to be successful down the road. Just look at what Brian and Hollie Slater have done.”

For Davis, who now lives in Mauston with his wife, that particular avenue led him to becoming a volunteer assistant with the New Lisbon wrestling program starting with the 2018-19 season. Davis praised Brian and Hollie Slater’s commitment to their community — including their work with Mill Haven Foods, their dairy marketing and manufacturing company — and felt like it was a perfect fit for him.

As for the Rockets, it goes without saying that having a wrestling icon like Davis in the fold is a massive boon for the small-town program. The New Lisbon cross country program even got help from Barry’s wife, Nan Doak-Davis, who was a six-time All-American in track and field and cross country at Iowa and later a national champion in the marathon.

“You don’t get this anywhere else. You don’t get an athlete, a coach like Barry Davis — you have a two-time world and Olympic silver medalist, you have the winningest wrestler in Iowa Hawkeye history — at this level, at this small of a school,” Slater said. “Honestly, I don’t think people take a big enough advantage of it. Even his wife, she helps out with cross country. Two years ago, she was fifth in the world in running. You just don’t have that in a small community.”

Davis’s desire to help others expands beyond just the New Lisbon wrestling room. If he sees something at a meet with a wrestler on a different team that he thinks he could help with, he’ll occasionally approach that kid’s coach and see if it’s alright if he offers some pointers.

That approach to coaching ultimately gets to heart of his philosophy in regards to wrestling. Sure, the competition of it all is obviously a major component of everything. But when all is said and done, Davis wants to make as many people better as he possibly can.

“Why would you help someone else on the other team? Because the kid’s working hard and he’s trying to get better,” Davis said. “It is about competition, but at the same time it’s about making people better and giving them an opportunity to be successful. It can help them open doors to change their life like people gave me opportunities to change my life.”

Barry Davis spent 25 seasons as the head coach of the Wisconsin Badgers wrestling program before stepping down from that position in 2018.

Barry Davis now works as a volunteer assistant for the New Lisbon wrestling program, serving under head coach Brian Slater, who wrestled for Davis with the Badgers.