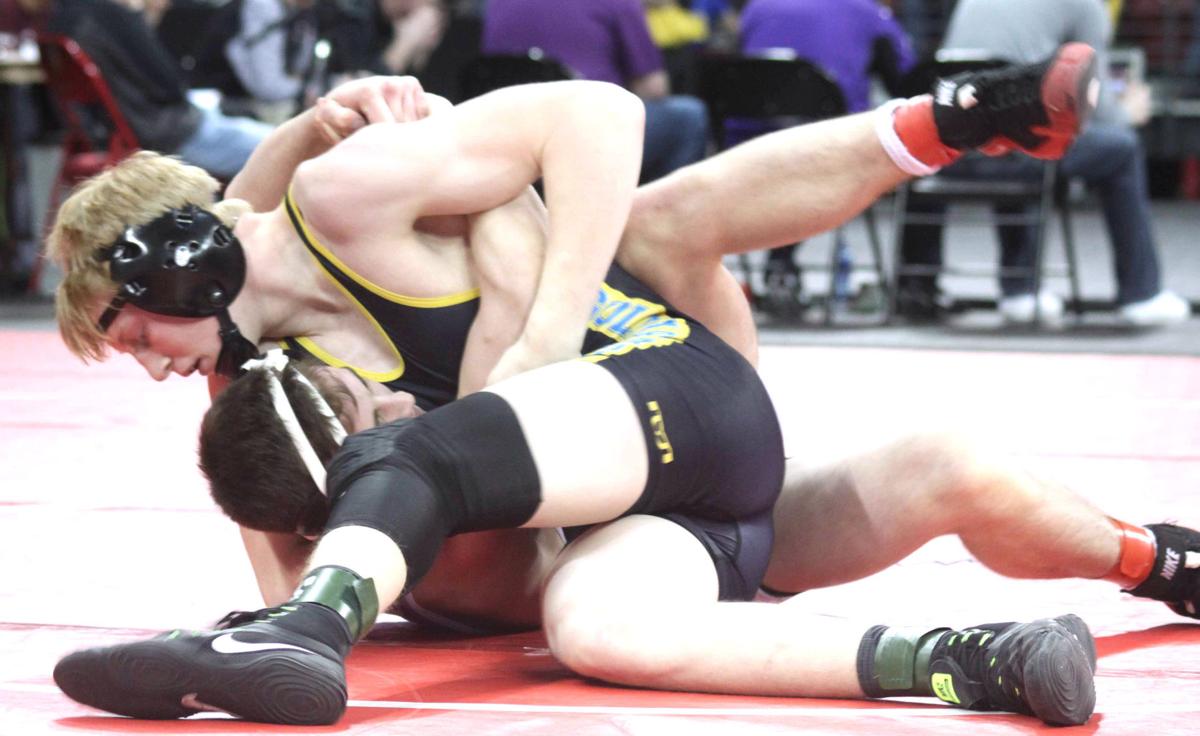 Mauston's Jarrett Dolata (138) grapples with Monroe's Cole Murray in the 3rd place match in the finals of the WIAA Individual State Tournament Saturday afternoon. Dolata pinned Murray in 1:46 to take the bronze medal.

Royall's Noah Friedl tries to score a takedown on Alex Lemanski of Edgar in the 5th place match at the WIAA Individual State Tournament Saturday afternoon. Friedl lost in a 9-5 decision to take 6th place in his weight class.

Jarrett Dolata of Mauston High School pinned Cole Murray of Monroe with 1:14 left in the second period Saturday afternoon to take 3rd place in his weight class for Division II in his first trip to the Kohl Center. Dolata was already ahead by Murray by 4 points from a takedown in the first period and a reverse fall in the second period before the pin.

Dolata said he pushed himself to his limit.

“This is the last match of the season,” he said. “(I) might as well put everything I got into it.”

While he said third place was good, it wasn’t what he was hoping for, especially after a defeat from Scott Cook of New London Friday evening in the semi-finals in a 9-3 decision. Dolata then wrestled Tim Coyne of Lake Geneva, defeating him in a 5-3 decision to advance to the 3rd place match. Cook would go on to defeat Ryan Hannah of Viroqua in a 4-3 decision to claim the state title.

“I’m glad even though I lost in the semi’s (Friday) I was able to come back and I dominate all through my placement matches,” Dolata said.

While he fell short of his goal to win a state title, he still has next year.

“It’s my last year,” he said. “(I) got to join my brother (Colin and Justin) on the state champion board next year.”

He said he plans to use his state experience from this year to aid him in winning a state title next year.

“I proved this year I’m up there... I’ll come back next year and just dominate,” Dolata said.

While Dolata got bronze, his teammates Teagen Miller (145), Jared Lenze (170) and Matt Chambers (152) fell short of making their goal to stand on top of the podium.

Teagen Miller was ranked 1st in the state going into last weekend’s state match. He was defeated by Friday afternoon by Laken Duerschmidt in a 9-7 decision in the quarterfinal match and was moved to the first round of consolation brackets where he was defeated by Cole Skeleton of Ellsworth in a 3-2 decision, eliminating his chances of placing.

Miller said he has been struggling with the flu after the sectional meet the week before.

“I just got really tired and didn’t really recover from being sick,” Miller said. “That no excuse, I should have wrestled better.

Lenze was ranked 3rd in the state for his weight class but was what he called “cradled and pinned” in the quarterfinals by Carter Veleke of Waupun in 1:56 Friday morning. Lenze was moved to the first round consolation brackets Friday afternoon where he was defeated by Tyler Hannah of Viroqua in a tie breaker 6-1.

“In my wrestleback against (Tyler) Hannah I came out flat and didn’t do a single thing for six minutes,” he said. “I had a mental block the last couple weeks I wrestled probably the worst I had all season.”

For Chambers, who was ranked 11th in the state going into the tournament, he said he came out “flat and nervous” for his the championship first round match against Jake McClintock of Lakeland Thursday evening. Chambers was defeated in a 4-2 decision. McClintock would take 6th at the tournament.

“I felt way more tired just because I had a bunch of nerves,” Chambers said. “After the first two periods I felt better but I couldn’t really get my offense going in the match.”

Lenze and Chambers are both seniors while Miller is a junior. Thinking back to the team goals that were set at the beginning of the season, they said they have nothing to complain about.

“We won a conference title as a team, we went 5-0 in the duals, at sectionals we took four kids to sectionals and we placed higher than the team sectional champions,” Lenze said.

Miller said he doesn’t plan to dwell on missing out on a state title.

“I’m going to work twice as hard as I did last year,” Miller said. “I’m going to get as good as I can get and come back with vengeance and win state.”

Royall’s Noah Friedl was ranked 7th in Division III in the 195 weight class coming into the WIAA tournament last week. He left the Kohl Center with a 6th place medal Saturday evening in his first time to the state match.

Friedl entered the 5th place match after being defeated by Aiden Hoffman of Straftord, who would place 4th in a 7-3 decision. In the match, he faced Alex Lemanski of Edgar in the first period he was defeated 4-1 and Friedl tried to close the game with a reverse fall in the 2nd period to make the score 4-3 but a neutral score on Lemanski made the score 5-3.

Friedl would manage to get another two points in the second period but Lemanski secured a takedown for two points at the end of the 2nd period. A reverse fall in the third period put Lemanski ahead with 1:15 left in the 3rd period. Friedl would try to score again, but ran out of time and settled for 6th place with a 9-5 decision.

“I did some good things and I did some bad things,” Frieidl, a junior, said. “I need to work on it for next year I know what I need to do now.”

The bad includes working on his cardio, “wanting it worse than what I was” and wrestling for a full six minutes. However, Head Coach Kevin Biermeier said his cardio is where it needed to be and didn’t play a factor in his matches.

He also said Friedl has been dealing with some injuries for his last couple of matches.

“He wrestled tough,” Biermeier said. “On his second to last match he hurt his arm kind of bad so he wrestled through that.”

Biermeier said he did excellent in his matches and was the “aggressor” the matches.

“He came in the wrestleback match and pinned (Hunter Huiras of Random Lake) who got second at state (last season),” Biermeier said. “The goal was to get on the podium getting down here and that’s what he did.”

Like Friedl and Dolata, freshmen Jake Rogers (120) and Gunnar Pedersen (152) of New Lisbon competed for the first time at the Kohl Center this weekend.

Rogers was only down by one point against Caden Calabrese of Kenosha Christian Life until Calabrese pinned him in 5:15 in the first round of competition Thursday evening.

Head Coach Brian Slater said nerves got the best of him and “he kind of quit wrestling.”

“The first couple minutes he was fine,” Slater said. “But then it kind of set in and he wasn’t him.”

It was the same way with Pedersen, who was also defeated in the first round Thursday when Tri-County’s Brandon Peckham secured an escape for a 1-0 score.

Both Calabrese and Peckham placed 5th and 6th respectively at Saturday’s finals.

“It is nervous to be down there for your first time,” Slater said. “As they watched the guys that beat them place they know they can compete at that level.”

Slater said with both athletes now having a state tournament under their belt, he has full confidence both athletes can get on top of the podium in their high school careers.

“They are both capable of winning state titles,” Slater said of both athletes. “Now they just got to put the work in and the determination and the mindset they can do it.”

Mauston's Jarrett Dolata (138) grapples with Monroe's Cole Murray in the 3rd place match in the finals of the WIAA Individual State Tournament Saturday afternoon. Dolata pinned Murray in 1:46 to take the bronze medal.

Royall's Noah Friedl tries to score a takedown on Alex Lemanski of Edgar in the 5th place match at the WIAA Individual State Tournament Saturday afternoon. Friedl lost in a 9-5 decision to take 6th place in his weight class.