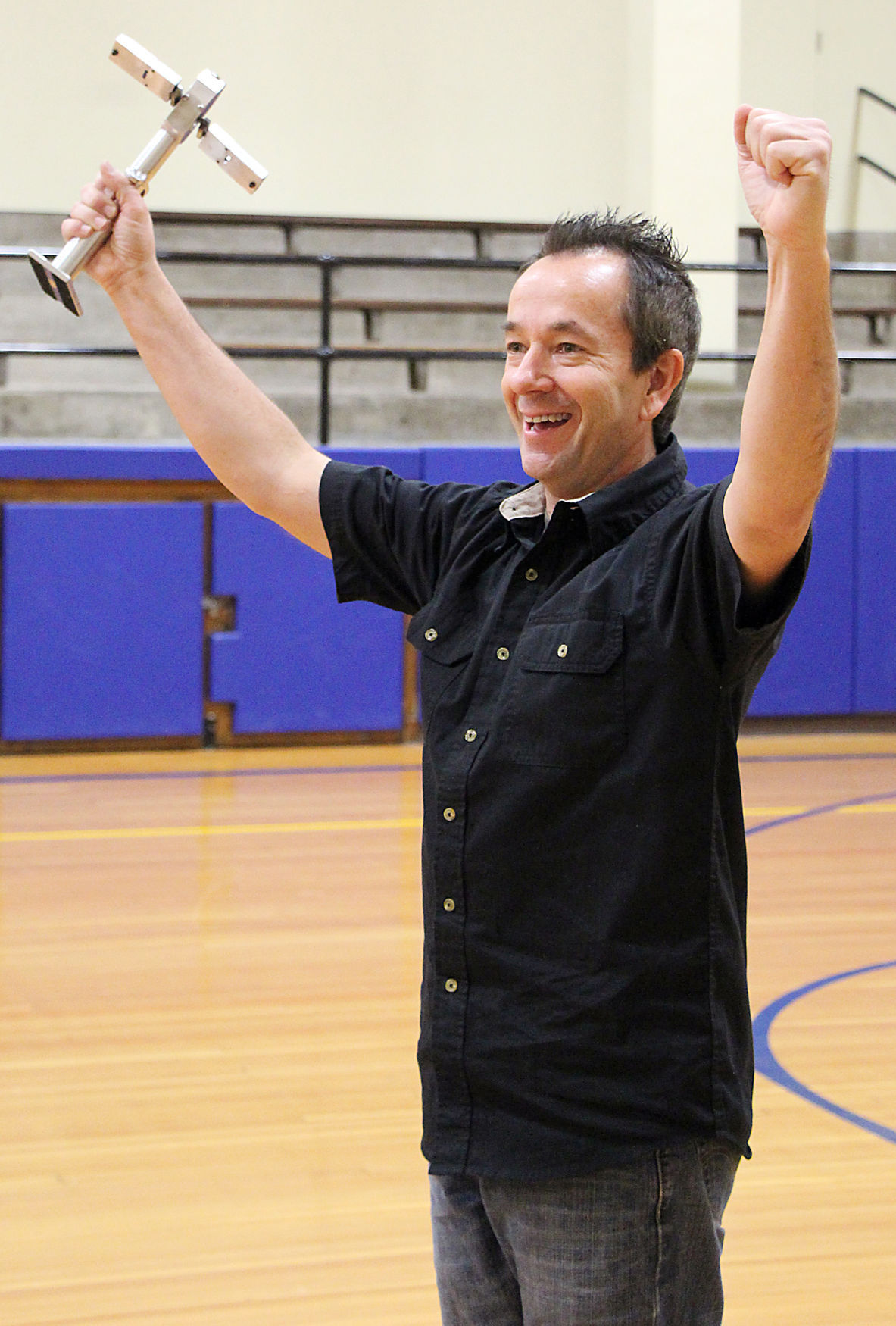 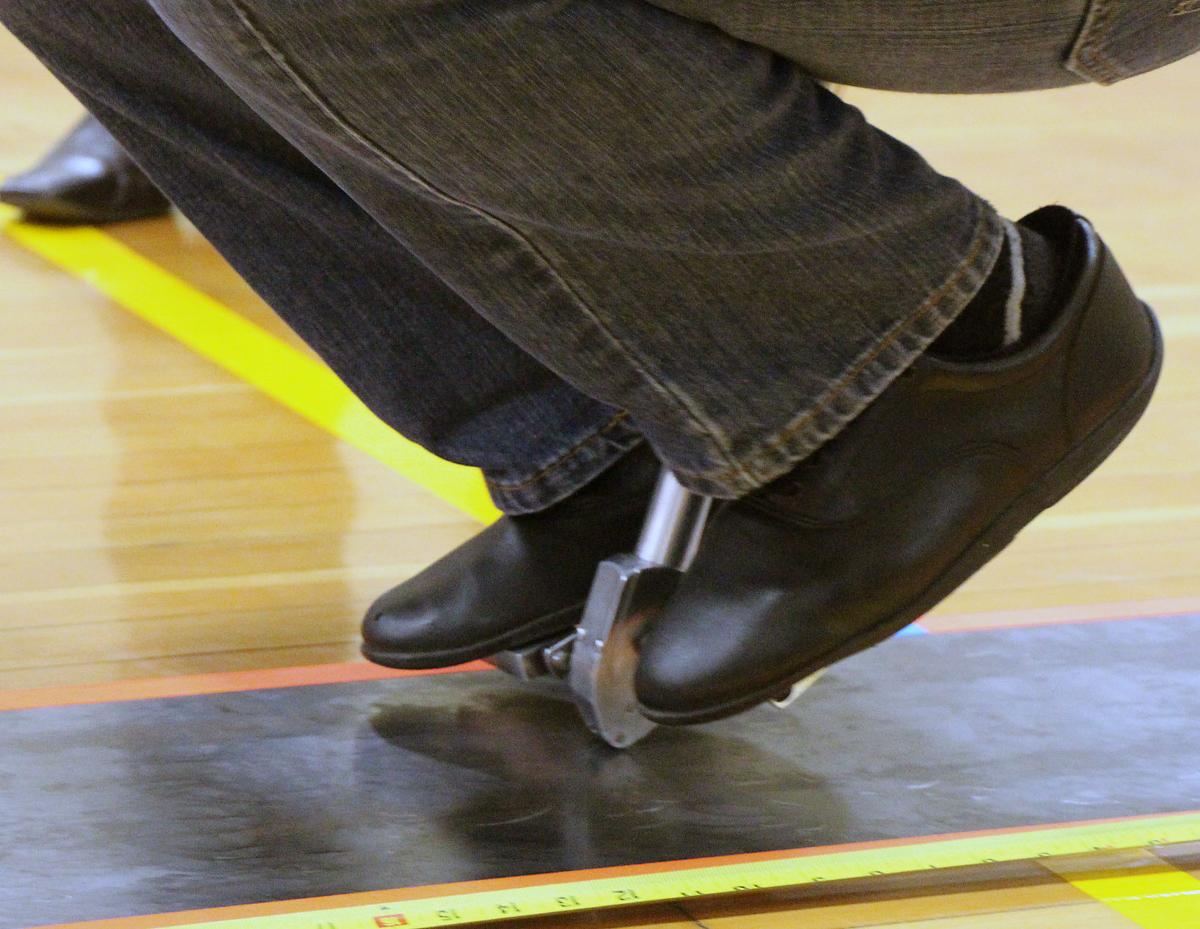 Rubber-soled shoes and perfect timing and balance are required to ride an 11-inch unicycle. 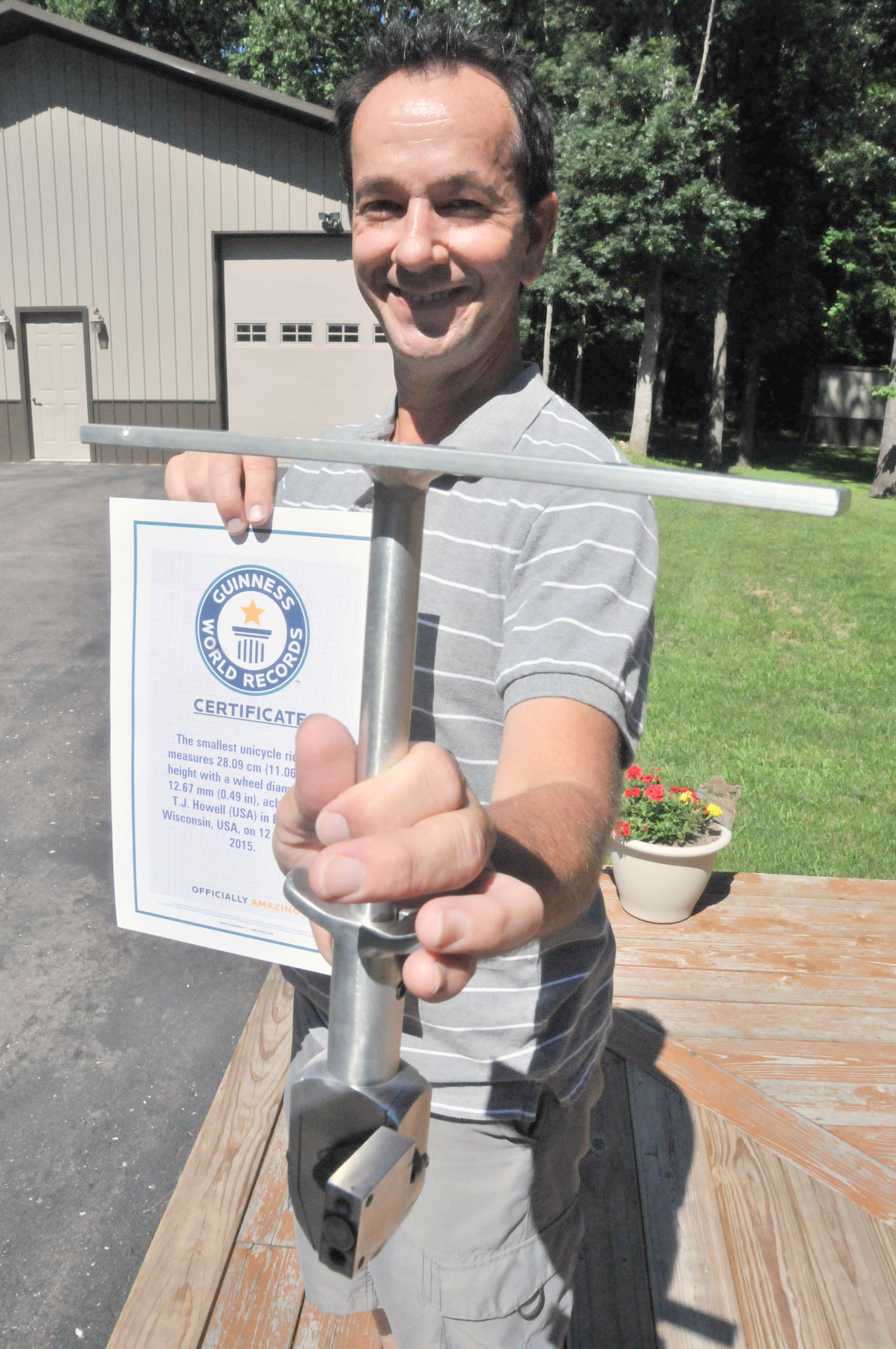 T.J. Howell is a big deal on a small wheel.

The longtime Baraboo performer has been recognized by Guinness World Records for riding the world’s smallest unicycle. Made of aluminum, it’s 11 inches tall and operates on a wheel only a half-inch wide.

Howell said receiving a certificate from Guinness two weeks ago was the culmination of a goal he has held since he began riding unicycles at age 12. “That was my dream, to have the smallest unicycle. It was always in the back of my mind,” he said.

The dream became a reality once Howell forged a friendship with local welder Greg Weirich. Howell previously had hired Weirich to build a miniature unicycle that operates on a skateboard wheel, and a couple years ago the two began plotting to build one small enough to set a world record.

After a year of design tweaks, Weirich created a unicycle an inch shorter than the previous record holder, with a wheel 3 millimeters smaller. With daily practice, Howell learned to ride it. “It wasn’t that hard when we figured out what we were going to do,” Weirich said.

“It’s a work of art,” Howell said, adding that he was mesmerized watching Weirich create a unique unicycle from raw metal. “To me, that’s magic.”

Riding it requires perfect balance and timing, as well as rubber-soled shoes. “I’ve got to focus,” Howell said. “I’ve really got to be zoned in for this.”

Once he mastered riding the tiny unicycle – covering distances up to 24 feet – Howell researched the requirements for establishing a Guinness record. He had to submit the unicycle’s specifications, pictures of the unicycle and a video of him riding it in a public place in front of witnesses. Howell did exactly that in November at the Baraboo Civic Center and sent in his materials. It took more than half a year, but Howell and Weirich have proof they’re world-record holders.

“It’s well worth the wait,” Howell said. “He was the first one I called. It took both of us to make this happen.”

“It feels pretty good,” Weirich said, noting that he and Howell each had to overcome a bout with disbelief. “We wanted it for so long, and we can’t hardly believe the reality.”

A longtime Circus World Museum performer, Howell’s juggling, cycling and comedy has become a staple at the Tommy Bartlett Show and at downtown Baraboo festivals. He doesn’t use the 11-inch unicycle in performance, as it can only be ridden on a steel strip.

The old record stood for more than a decade. The unlikely pairing of a unicyclist and a welder give Howell and Weirich an advantage, but they know better than to predict their achievement won’t be topped. “Records are made to be broken,” Howell said.

Cruising the High Seas, a juggling and unicycle performance with T.J. Howell and his son. Carson, will be held at 10 a.m. Friday, May 16 at St…

Rubber-soled shoes and perfect timing and balance are required to ride an 11-inch unicycle.