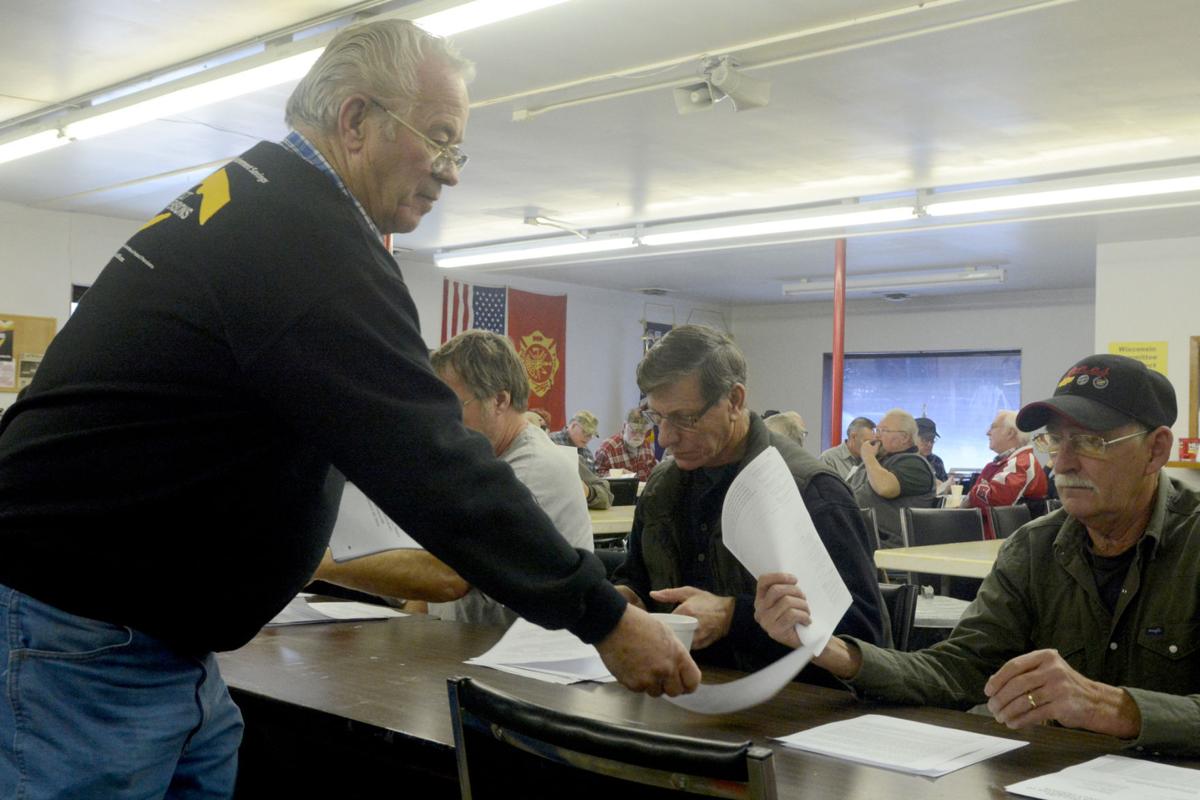 Bob Brockway hands out paperwork to attendees of the Endeavor Committee to Protect Pensions meeting Saturday in the Endeavor/Moundville fire station. 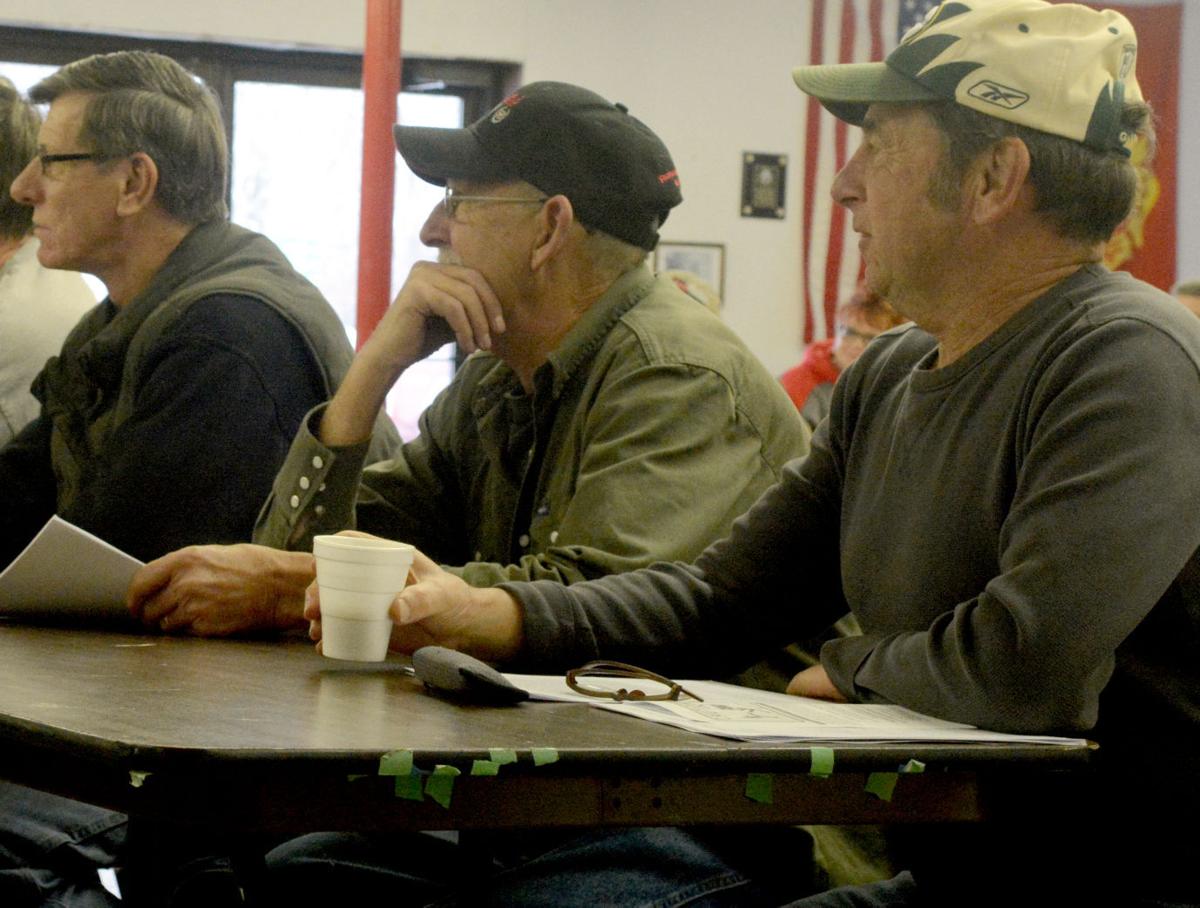 A table of attendees of the Endeavor Committee to Protect Pensions meeting listen to speakers Bernie Anderson and Bob Amsden, of the Milwaukee chapter, on Saturday in the Endeavor/Moundville fire station.

ENDEAVOR — Members of the Wisconsin Committee to Protect Pensions say cuts to promised pensions will do more than devastate individual retirees. The cuts will rock the U.S. economy.

Milwaukee chapter members Bob Amsden and Bernie Anderson addressed members of the Endeavor committee Saturday with a plea for action, as retirees face cuts of up to 70 percent of their pensions due to legislation that lets distressed funds cut benefits.

“This isn’t a Teamster issue,” Amsden said. “This is a multi-employer pension plan issue that’s going to affect upwardly of 10 million people if this goes through the way the government is pushing it.”

Losses of that magnitude would hit virtually every community, said Amsden, who personally faces a 55 percent cut to his $3,000-a-month pension.

“They will not have that extra dollar to spend in the churches for donations, the corner stores, the taverns, the bowling alleys, the car dealerships, the travel industry. It’s trickle-down economy.”

But Protect Pensions committees note that, due to the MPRA, up to 10 million people in multi-employer plans nationwide will “sooner or later be in trouble also.”

“The tax implications,” Amsden said, “will crush this country if all 10 million” lose big chunks of their pensions.

The Endeavor committee is one of about 50 Protect Pensions committees in the U.S., and one of five in Wisconsin. Endeavor’s committee meets on the second Saturday of each month and started meeting in November, led by Montello resident Bob Brockway.

“Anybody that knows about this: Tell five more people,” Brockway said. “Have those five people tell five more. The poor people that don’t know what’s going on yet will be standing in line at the bank saying, ‘Where is my check?’ They have no idea they’ll be cut 50, 60, 70 percent in their pensions.”

Brockway reported his committee Saturday collected about 300 letters from local members, which will be hand-delivered to lawmakers such as Sen. Ron Johnson and Rep. Glenn Grothman, both R-Wisconsin.

“This is a voting year, and I’ll say this: We will vote them out,” Brockway said. “We will not keep them in office if they don’t get on our side. Congress did us wrong.”

Positive developments since Endeavor’s last meeting Dec. 13 included support from Teamsters Unions Local 695, based in Madison, a group that was at first hesitant to get behind the Protect Pensions movement. Protect Pensions members met with 695 leader Wayne Schultz and “he’s totally on board now,” Anderson said.

“His help will be tremendous.”

Whether Central States will be allowed to cut pensions will be determined by Washington attorney Kenneth Feinberg, who was appointed by the U.S. Treasury Department to review the fund’s rescue plan.

Amsden said Feinberg is expected to make a decision in May. “He’s taking this very seriously. He has to abide by the letter of the law.”

Protect Pensions committees are behind a bill from U.S. Sen. Bernie Sanders that would protect retirees from pension cuts, protection that Amsden said should not be confused with a “taxpayer bailout.”

“We are taxpayers,” Amsden said. “This is money we put in on our behalf and benefit for our guaranteed retirement, which was stolen in Dec. 2014 by the government of our country, taking away ERISA (Employee Retirement Income Security Act of 1974), which guaranteed our pensions.”

Other funds, Amsden said, have also filed for protection using MPRA, including in the past week an Iron Workers union in Cleveland. Committees expect many more to follow Central States’ lead if something isn’t done to stop it.

Amsden asked how many in the Endeavor group were veterans, and more than a dozen raised their hands in the crowd of about 60.

“What kind of country is this that they can do this to the people who built this country?” Amsden said.

“People don’t understand how big this is. It’s not just a rumor anymore. It’s just a fact.”

For more information about the Protect Pensions, visit mycspensionhandsoff.com.

Bob Brockway hands out paperwork to attendees of the Endeavor Committee to Protect Pensions meeting Saturday in the Endeavor/Moundville fire station.

A table of attendees of the Endeavor Committee to Protect Pensions meeting listen to speakers Bernie Anderson and Bob Amsden, of the Milwaukee chapter, on Saturday in the Endeavor/Moundville fire station.