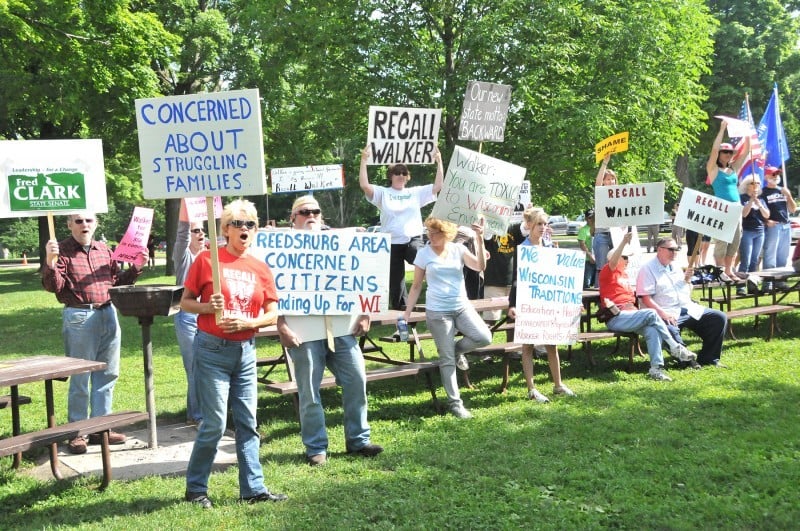 Nearly 300 people turned out to Devil’s Lake State Park during its centennial celebration to protest Gov. Scott Walker’s controversial budget bill and proposed cuts to education and other programs. 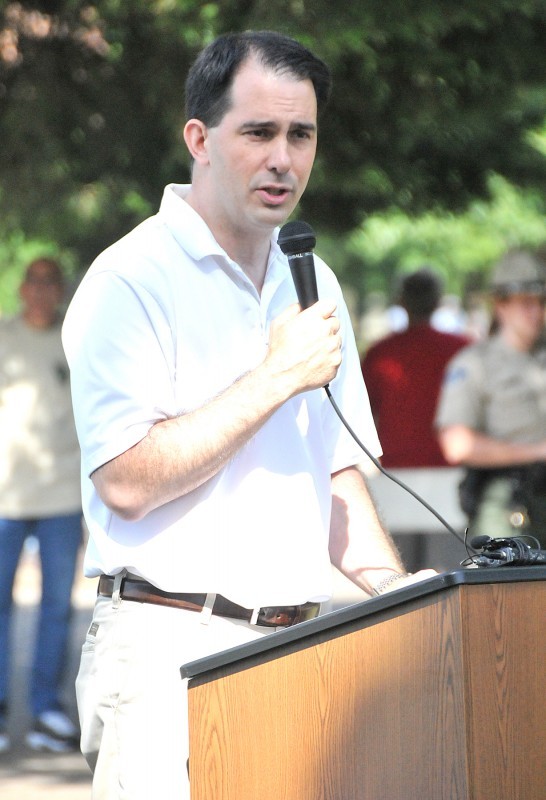 Just a day before Gov. Scott Walker signed his controversial 2011-13 budget in Green Bay, he was met at Devil’s Lake by about 300 people who opposed his restrictions on collective bargaining and cuts to education and other state programs.

Many of the protestors, including Baraboo resident Tom Holmes — who led the charge with his wife Sue while waving the Wisconsin State Flag — marched from the park’s entrance to the North Shore Chateau where Walker was set to speak.

"We want Gov. Walker to know his pro-big business attitude doesn’t bode well for our labor force in the state," Holmes said. "We also want him to understand his assault on the environment is wrong. Wisconsin has a very rich history of conservation. We had such great conservationists like Gaylord Nelson and Aldo Leopold and it seems our governor has forgotten about them and is leaving our environment in peril."

But Walker’s speech contrasted with the concerns of the protesters, and focused on the impact of places like Devil’s Lake.

"I remember coming here as a young boy," Walker said. "I camped here. I created many fond memories here with my family. I knew this was one of the more popular parks in Wisconsin and even the nation."

Walker was not able to sway many in the crowd, who said his policies would damage places like Devil’s Lake.

State Rep. Brett Hulsey, D-Madison, criticized Walker’s decision to take part in the centennial celebration and stated in a press release that the governor’s policies are hurting the environment.

"I am concerned that Gov. Walker and the GOP are undermining Wisconsin’s conservation heritage, threatening our hunting and fishing habitat and putting our health at risk," Hulsey stated in a press release. "Gov. Walker showing up at the state park for a press conference is like a fox hosting a chicken fry at the henhouse. Walker and the GOP have launched the worst assault on Wisconsin families and environment in state history. He’s not a supporter of our state parks."

While many of those in attendance focused on modern politics, speakers worked to remind people that it took 100 years to make Devil’s Lake State Park what it is today.

Wisconsin Department of Natural Resources Secretary Cathy Stepp thanked those who tirelessly worked in the Civilian Conservation Corps to create the park’s most prominent features. She also thanked past and current managers of the park.

"Little did I know that I would be standing here today celebrating the park’s centennial," he said. "When I first started working here we were involved in a remodeling project and a person who worked for the CCC came up to us to see how some of the buildings were doing. This park holds so much history and I am proud to be a small part of it."

Wisconsin State Parks Director Dan Schuller said Devil’s Lake gives visitors a "sense of place and being" away from the hectic pace of the outside world.

"This park is here because people cared," Schuller said. "We care and will continue to care for it."

Dark sky areas perfect for stargazing in the U.S.

The Moon could be hiding water on its rough, bumpy exterior

The Moon could be hiding water on its rough, bumpy exterior

New summer camp in Mayville brings children to the farm

Nearly 300 people turned out to Devil’s Lake State Park during its centennial celebration to protest Gov. Scott Walker’s controversial budget bill and proposed cuts to education and other programs.