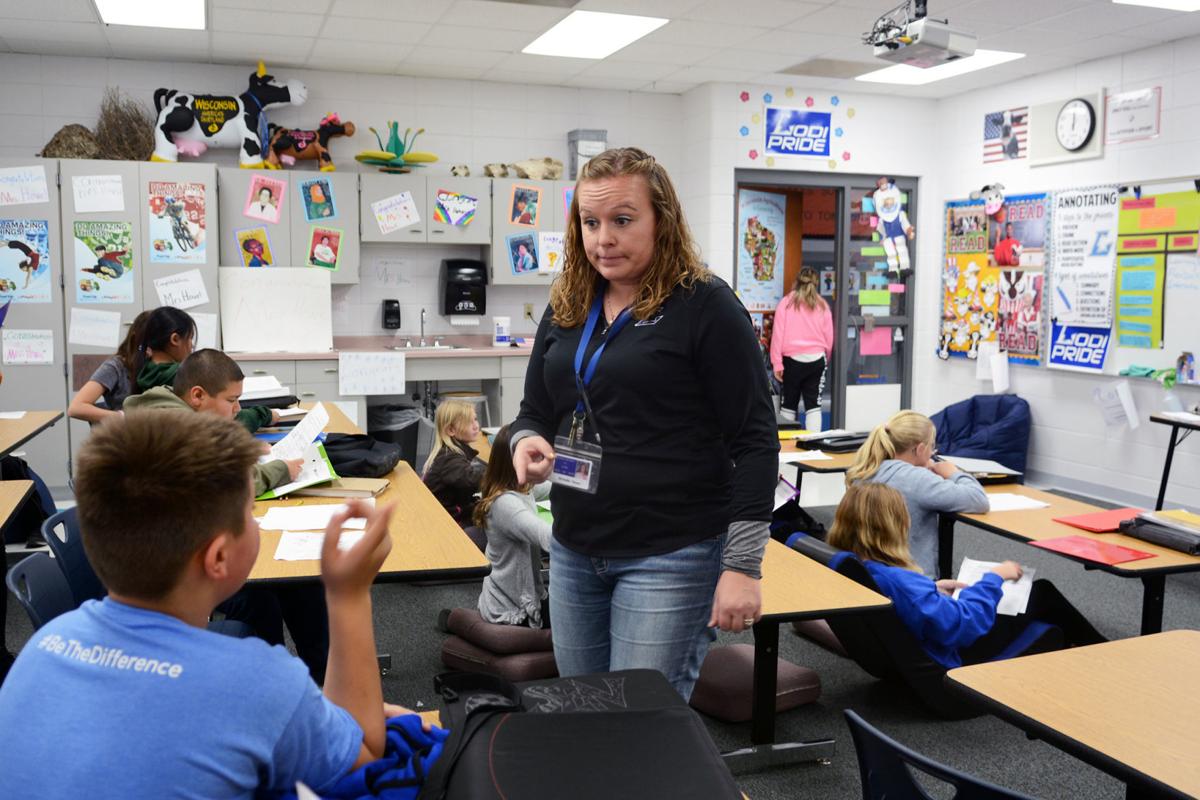 Lodi Middle School science teacher Michelle Howe listens to a question from sixth-grader Weston Olsen during class Oct. 21. The Herb Kohl Educational Foundation named Howe a 2020 Teacher Fellow this week, an honor given annually to 100 Wisconsin educators and accompanied by a $6,000 award.

The Herb Kohl Educational Foundation named five Baraboo educators — the highest number the school district has gotten in at least a decade — and one Lodi teacher to receive the 2020 Teacher Fellowship Award, an honor given annually to 100 teachers across the state.

Allaby, who is in her 15th year working for the Baraboo School District, said she didn’t expect to win. Being nominated by a colleague was an honor in itself, she said.

“It’s just cool that there were five of us from Baraboo and then a student too (who won a Kohl Foundation Student Excellence Scholarship), so it’s kind of a great honor and a really good, positive thing for our district,” Allaby said.

Michelle Howe, a science teacher at Lodi Middle School, also earned a Teacher Fellowship Award, her second honor this year after she became the first Lodi teacher ever to win a Presidential Award for Excellence in Mathematics and Science Teaching. She has worked for the Lodi School District since 2007.

“I appreciate living and teaching in a community that supports our schools and our students in their educational journey, and I want to thank everyone for the support that they give the teachers so that we can do the best job that we can in educating all students,” Howe said, adding that she’s excited to be recognized for her work and dedication to students.

Baraboo School District Administrator Lori Mueller wrote in an email that the district is “extremely proud” of its five 2020 recipients.

“Each one of them is so deserving of this recognition both locally and regionally,” Mueller wrote. “The quality of teacher exhibited in each of our winners reflects the culture of excellence and teacher efficacy present in our teaching force in the Baraboo schools.”

In her second year with the district, Puntney noted that she feels fortunate to have an employer that offers “so many opportunities” for professional development and the ability to create new classes.

She said she owes her success to her students, who “make it so worth it.”

“It’s definitely indescribable, honestly,” Puntney said of receiving the award. “I love my job so much, I love my kids, I love the program that we’re working to build ... It’s such a great feeling. It’s really rewarding to know that the work that we’re doing is worth it and people see that it’s worth it, too.”

Teacher Fellows receive a $6,000 grant, along with a matching grant for their schools.

Allaby plans to put her school award toward the creation of an outdoor learning space at GLW, a project for which two previous Kohl award winners — GLW Principal Amy Fassbender and kindergarten teacher Liz Gulden — used their funds. Allaby said the committee working on the project hopes to break ground this spring.

McCulloch, who has worked in Baraboo for 25 years, hopes to use her funds to provide more opportunities for JYMS students, such as organizing field trips for them to see something they haven’t seen before or to expand their potential.

“I’m super excited for our school district, first of all, because it’ll be great to have money to help out with different programs,” McCulloch said. “I’m very lucky to be in a district that offers me a lot of wonderful opportunities and experiences so that I can accomplish the goals I want to with my students.”

Puntney and McCabe said they don’t know yet how they will use their funds.

As an educator for 15 years — two of which have been in Baraboo — McCabe said she was nominated for a Kohl award twice before, but this is her first time winning one. She was surprised when she found out.

“There’s so many great teachers that I work with every day that are just as deserving, if not more so, so it’s very exciting and I’m proud to join the number of teachers that have previously won it,” McCabe said.

Gillmore is in her seventh year working in Baraboo.

A recognition luncheon and award program will be held starting at noon May 16 at Baraboo High School for the region’s 2020 recipients of Herb Kohl Educational Foundation awards, including students, teachers and principals. Herb Kohl, former U.S. senator, will be in attendance, according to a news release.

Two Baraboo teachers won fellowship awards last year. According to the foundation website, the district has not had more than two teachers win the honor in at least a decade. In four of the last 10 years, Baraboo didn’t have any.

According to the release, recipients are chosen by a committee of civic leaders, representatives from education-related associations and the program’s co-sponsors: The Wisconsin Newspaper Association Foundation, Wisconsin Department of Public Instruction, Wisconsin Council of Religious and Independent Schools, regional Cooperative Educational Service Agencies, the Association of Wisconsin School Administrators and the Wisconsin Parents Association.

Jan Imhoff is racking up honors.

One for the ‘underdogs’: Montello teacher earns Kohl award

Baraboo High School senior Jacob Carignan won a $10,000 scholarship this week that goes to only about 100 Wisconsin high school students each year.

At 9 years old, Marie Fadeyeva’s life was suddenly upended by a move from her native Russia to Wisconsin.

A Baraboo elementary school will lose its principal at the end of this school year.

Lodi Middle School science teacher Michelle Howe listens to a question from sixth-grader Weston Olsen during class Oct. 21. The Herb Kohl Educational Foundation named Howe a 2020 Teacher Fellow this week, an honor given annually to 100 Wisconsin educators and accompanied by a $6,000 award. 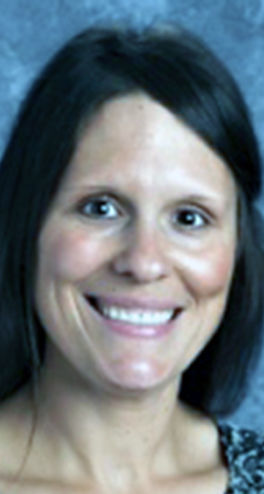 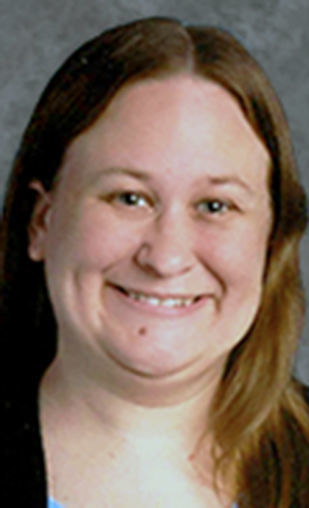 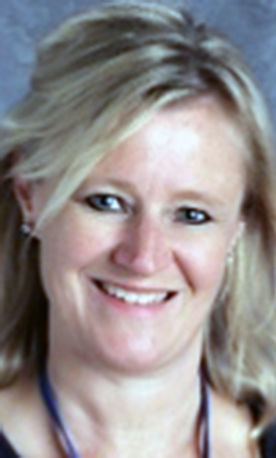 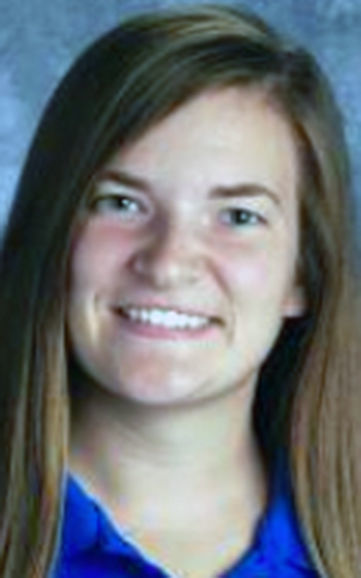 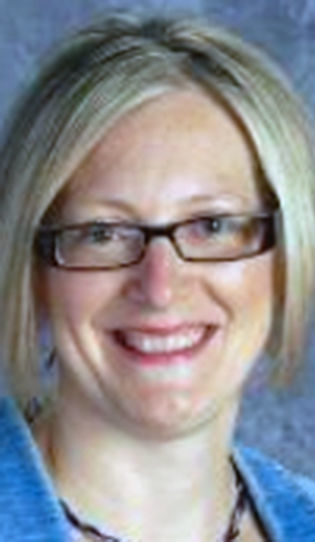 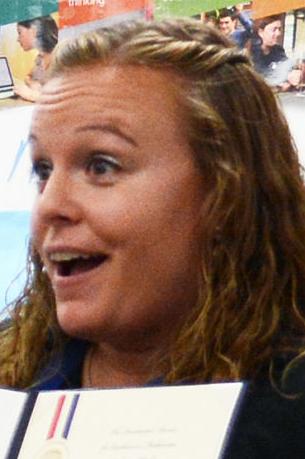