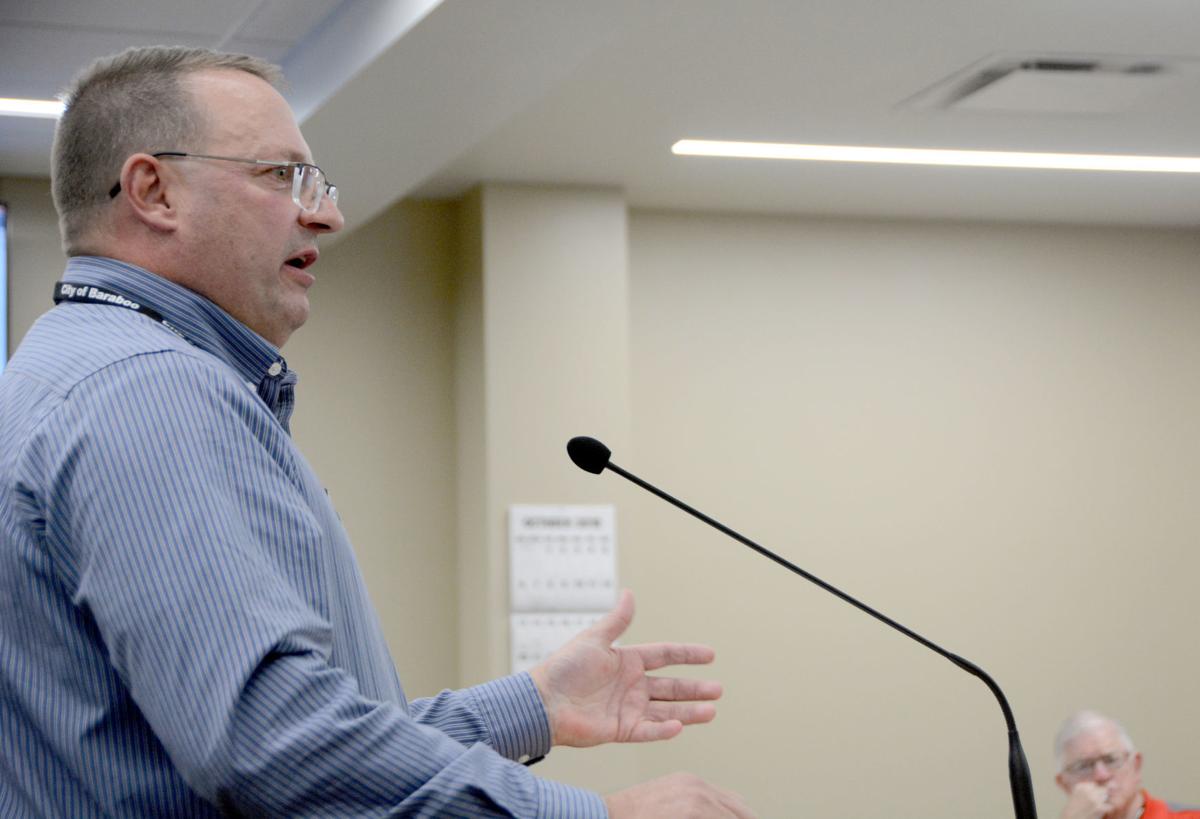 Baraboo Director of Public Works Tom Pinion talks Tuesday about plans for a city-owned parcel along Lynn Street to become a luxury apartment complex during the council meeting at City Hall. 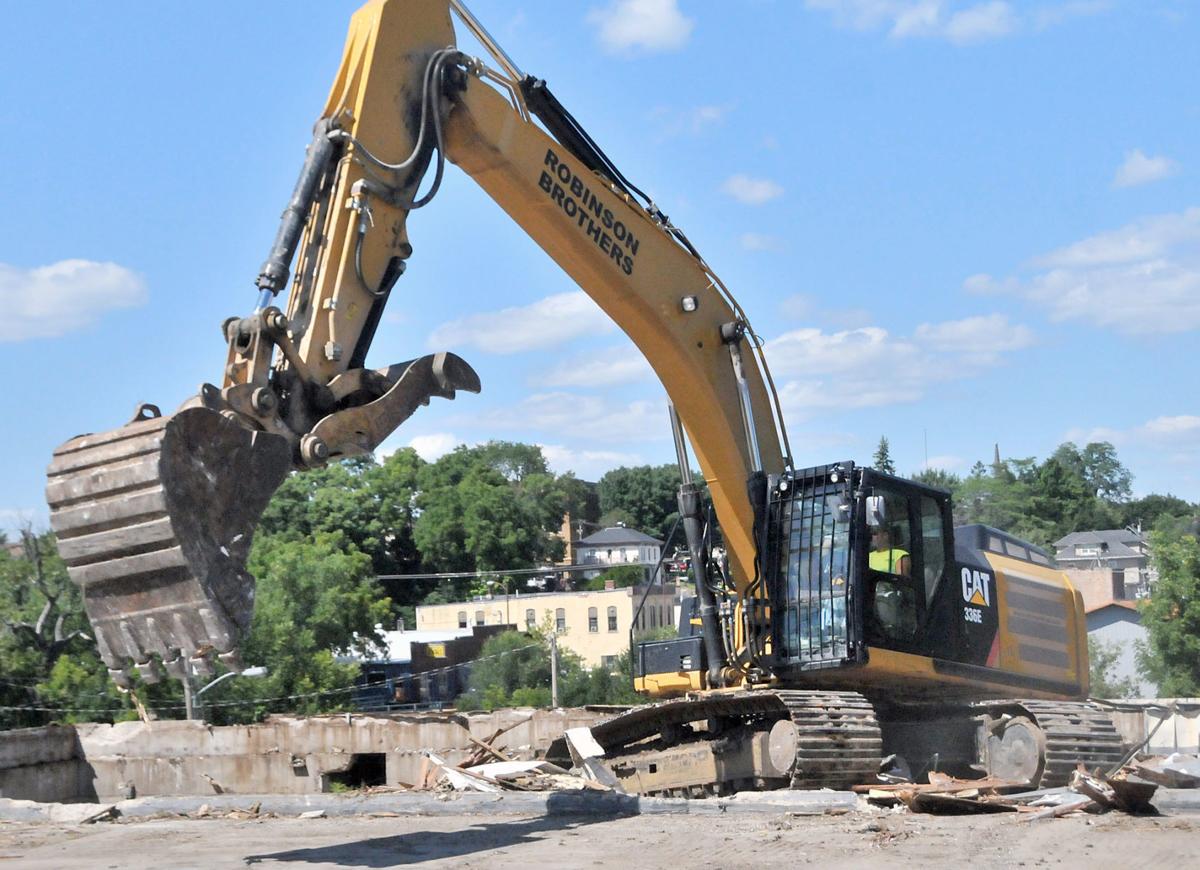 A demolition crew from Robinson Brothers Environmental of Waunakee takes down a former co-op store and tire shop in August 2018 on Lynn Street, clearing the site for construction of an apartment building overlooking the Baraboo River.

After a housing company “got cold feet,” Director of Public Works Tom Pinion told Baraboo Common Council members Tuesday that a new group has stepped in with plans to build a 64-unit apartment building at 325 Lynn St.

“As luck would have it, these folks came to town a couple of months in advance of the prior developers’ decision and indicated a strong desire to build multi-family housing in the city of Baraboo,” Pinion said. “When this site became available, we reached out to see if they still had an interest and (they said) ‘Absolutely.’ They showed up the next day for a meeting.”

Pinion and other city staff have been meeting with representatives from Three Amigos developers to go over the site plans in recent months. The lot, formerly the site of Jim’s Truck Repair, is now owned by the city and spans 1.6 acres along the Baraboo River.

“We’re excited about the opportunity and this is sort of the first step,” Pinion said, noting the city Finance Committee unanimously recommended it be embraced by the full council.

The complex would have an assessed value of $5 million. Part of initial talks with the company have included Three Amigos developers’ desire to see incentive financing through the tax increment finance district. As part of Tax Increment Financing District 8, the complex would build and once assessed, receive a tax reduction of about $1 million in an agreement commonly referred to as pay-as-you-go, or paygo.

“It’s not money out of the city’s pocket, per se,” Pinion said. “They pay it in taxes, as part of the incentive then, they get some of that money back.”

At an assessed value of $5 million, Pinion said the current tax rate means the complex would generate about $125,000 annually. Roughly $89,000 per year would be paid back to the company as an incentive, which means the city still retains tax revenue to reinvest in work in TID 8 for the remainder of its 13-year existence.

“This certainly looks like a win-win situation,” he said.

The former tire shop and auto repair operation was originally sought by Capitol Housing II LLC of Dane and the city approved site plans in July 2018, but no development moved forward.

Discussion of the site revolved around its designation as an area known for petroleum contamination site by the state Department of Natural Resources. A fund award can be designated to municipalities to clean up such sites. Pinion said cleanup was completed with the aid of roughly $350,000 reimbursed funds from the DNR.

The required “cap” would mean that 4 feet of gravel fill would be put in, but Pinion said the city would seek provisional approval without creating that cap, since developers would just need to dig up the ground when work begins.

Council member John Ellington asked what “luxury apartments” include. Pinion said they will be market-rate apartments, referring to them as “nice” and roughly a “B” on a traditional grading scale. He said units likely will exceed $1,000 in rent based on the investment, but that because planning is in its initial stages, “they just haven’t come up with those specifics yet.”

Pinion said staff have “vetted” the development company and were glad to see Three Amigos as a financially stable company with property development primarily in La Crosse and Holmen.

“They were looking to expand their wings and go within a 60-mile radius,” Pinion said. “Baraboo is the first place they chose to spread those proverbial wings.”

Council members voted unanimously to authorize the city to move forward with the agreement. While under the agreement, the city isn’t allowed to sell the property to another party. Three Amigos must continue its proof of insurance in specified amounts.

The city will have to provide proof of a lack of contamination at the site and ensure the property is “build ready.” The agreement will remain in effect until April 1.

Baraboo will pay a Waunakee company $45,700 to clear a riverfront property, allowing the city to sell it to a developer looking to build an ap…

Baraboo Director of Public Works Tom Pinion talks Tuesday about plans for a city-owned parcel along Lynn Street to become a luxury apartment complex during the council meeting at City Hall.

A demolition crew from Robinson Brothers Environmental of Waunakee takes down a former co-op store and tire shop in August 2018 on Lynn Street, clearing the site for construction of an apartment building overlooking the Baraboo River.