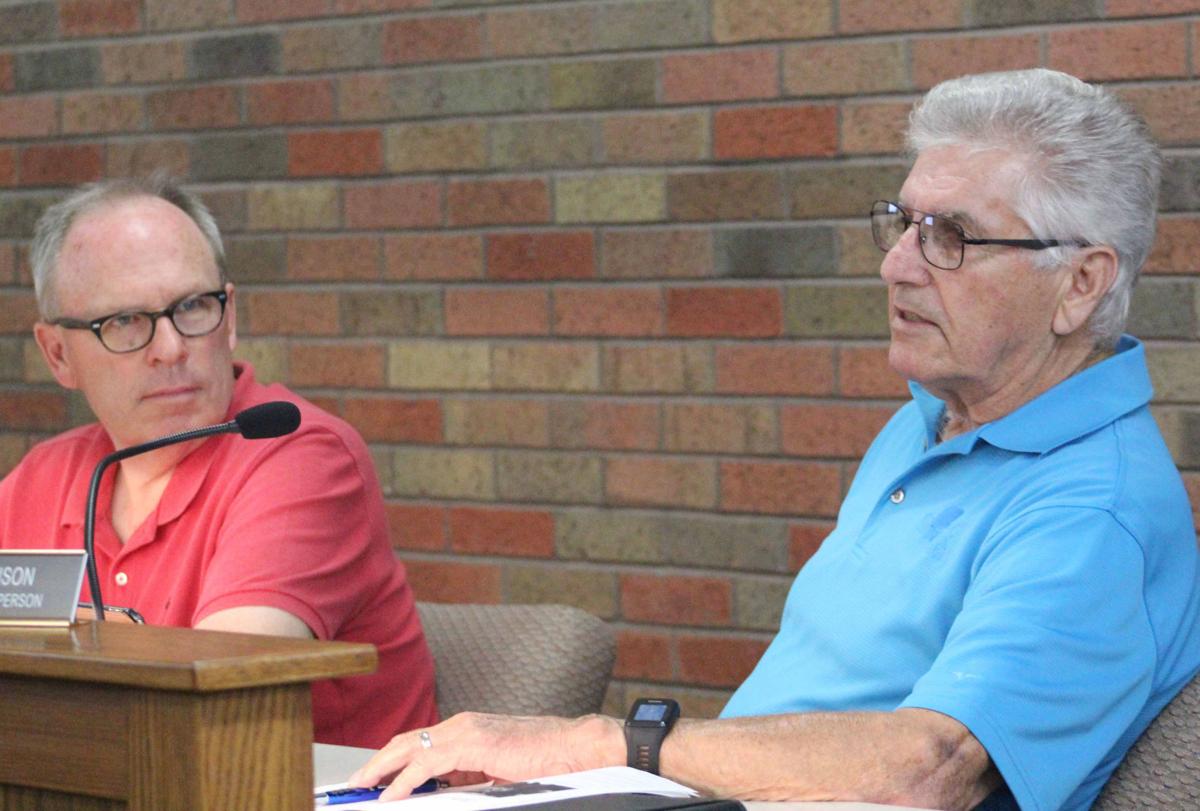 Ordinance committee member Tom Seamonson, right, explains his stance that he would support a vaping or e-cigarette ban in public places within the city. Fellow member Richard Braun is at left. 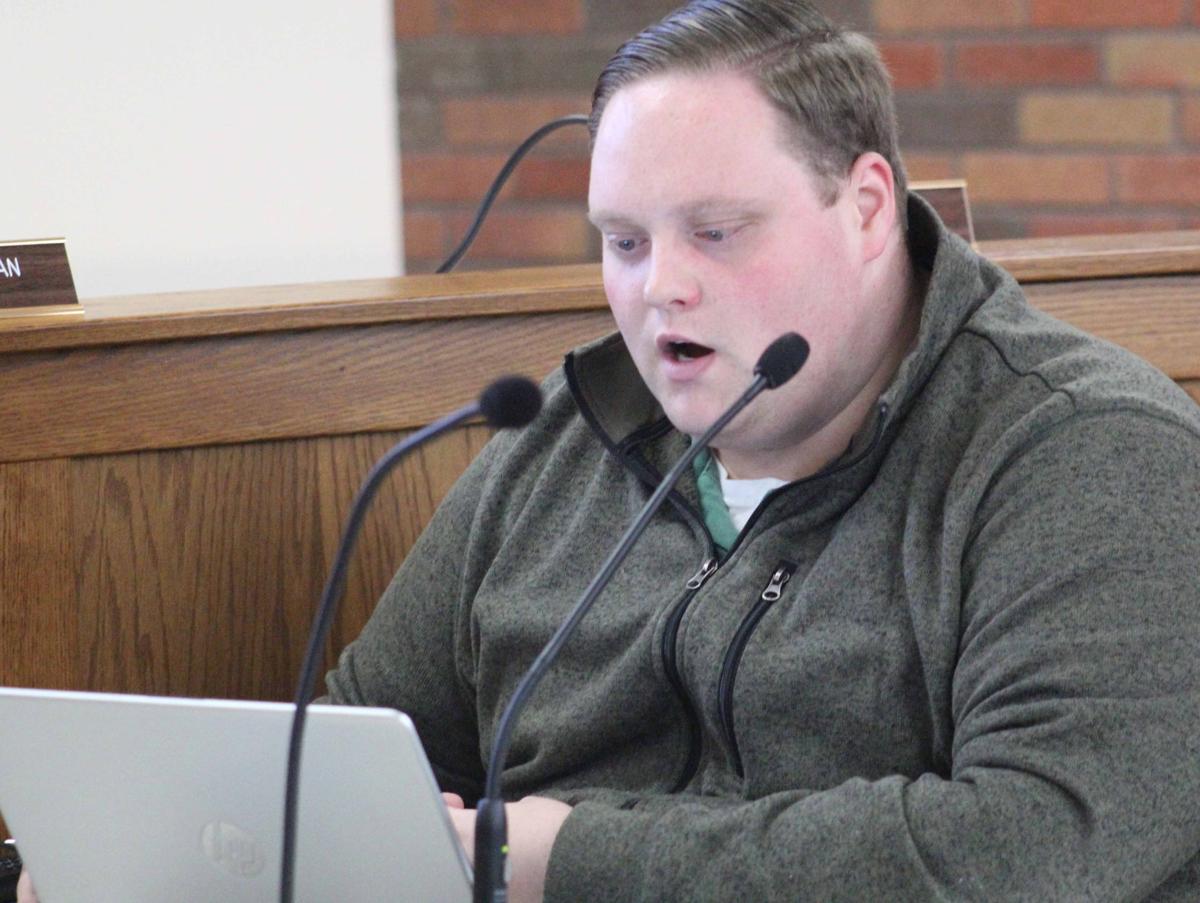 Reedsburg City Clerk/Treasurer and Finance Director Jacob Crosetto informs the ordinance committee about other municipalities in the state that banned vaping in public places at the committee's Sept. 23 meeting. 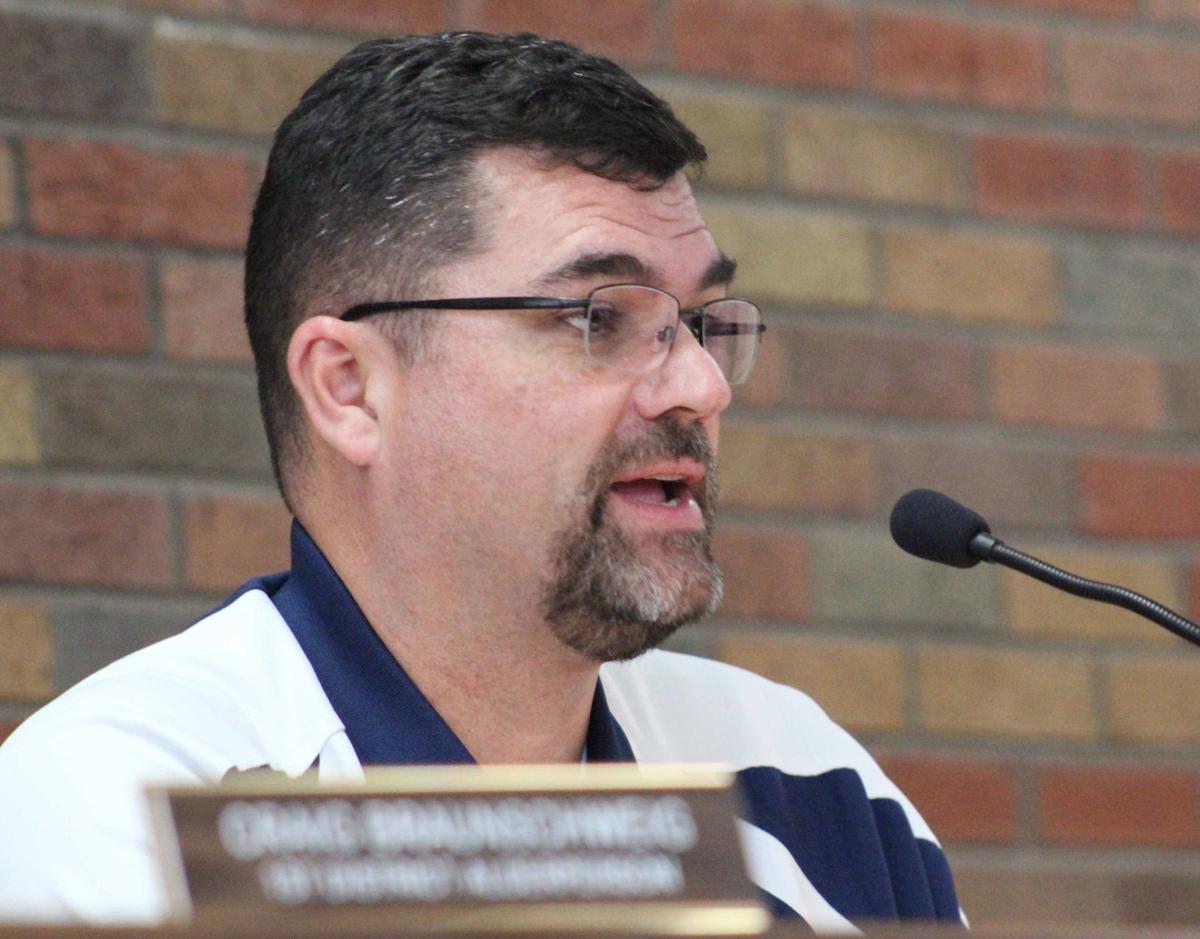 Reedsburg set an internal policy banning vaping and e-cigarette use in all city- owned buildings.

Because it is an internal policy, the item wouldn’t need council or ordinance approval. The policy came about during discussion at the Sept. 23 ordinance committee meeting, where members talked about crafting an ordinance related to e-cigarette and vaping regulations in public places. City Administrator Tim Becker said he plans to installs already ordered signs at city owned buildings informing the public of the ban.

City owned buildings include the library, city hall, police and fire departments. No action was taken at the meeting.

The city plans to wait on writing its own ordinance until the state takes up its proposed legislation that would ban vaping indoors in public places, adding to its smoking ordinance passed in 2010. The committee also suggested a ban on city employee’s vaping in equipment, which would require further action from the personnel committee if that would go through.

As vaping grows in Wisconsin, adherents and skeptics abound

Reedsburg follows Baraboo, which also placed a ban on vaping products inside city buildings in March. Reedsburg’s smoking ordinance follows state statue banning smoking in public places and places of employment as well as a ban on using tobacco products on and within 20 feet of premises owned by the School District of Reedsburg.

According to Consumer Advocates for Smoke Free Alternatives Association website, vaping is prohibited at indoor facilities at the state fair. The website lists nineteen municipalities that have banned vaping where smoking is prohibited including Appleton, Racine, Watertown and Wausau.

Reedsburg took a poll via its Facebook page, asking if the city should “prohibit vaping/electronic cigarette use indoors?.” Out of 236 votes, 86% of people voted “yes” and 14% voted no.

Public Health Madison and Dane County and The Sauk County Health Department issued health advisories in early September urging those who vape or use e-cigarettes to stop. According to the Wisconsin State Journal, state health officials have confirmed 34 cases of Wisconsin residents hospitalized for severe lung disease and damage from vaping in 15 counties.

Several reports of vaping related illness have made headlines in recent months. In August, the Associated Press reported 11 teens and young adults were hospitalized due to severe lung disease linked to vaping.

Ordinance Committee Chairman David Moon, a social studies teacher at Reedsburg Area High School, said vaping is a common issue at the high school. If teachers discover a student vaping, it’s a five day out of school suspension, he said. Vaping is illegal for those under 18-years-old.

“Kids have been convinced it’s really not bad for them,” Moon said.

Ordinance Committee Member Tom Seamonson spoke in favor of a potential ban on e-cigarettes and vaping products in public places. He smoked for 20 years and quitting 40 years ago was “the smartest thing” he ever did, he told the committee.

He was concerned about the health of young people who vape, especially those who vape in their teens and young adult life once they reached their 40s and 50s.

Baraboo will ban smoking and vaping — but not smokeless tobacco — from city parks.

E-cigarettes and vaping products have been on the market since the mid-2000s. Recently, the industry has underwent a crisis as the national de…

Just Ask Us: With lung injury outbreaks from vaping, is it better to smoke cigarettes?

People who have quit smoking through using e-cigarettes and vaping should not return to regular cigarettes, the CDC has advised.

After setting an internal policy banning vaping in all city buildings, Reedsburg is looking into possibly expanding its smoking ordinance to i…

Vaping or e-cigarettes use is now treated the same as smoking in public places throughout Reedsburg.

Ordinance committee member Tom Seamonson, right, explains his stance that he would support a vaping or e-cigarette ban in public places within the city. Fellow member Richard Braun is at left.

Reedsburg City Clerk/Treasurer and Finance Director Jacob Crosetto informs the ordinance committee about other municipalities in the state that banned vaping in public places at the committee's Sept. 23 meeting.