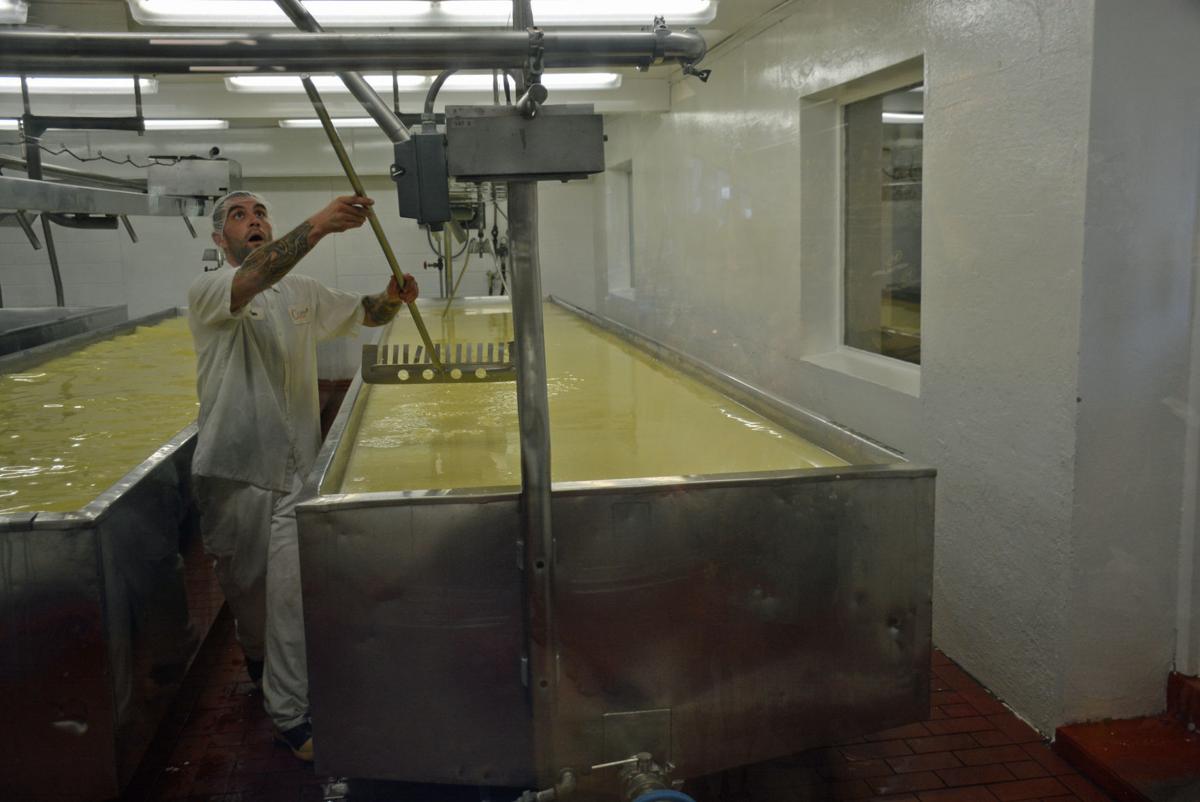 Jason Wegel stirs a vat of what will eventually be cheese to prevent knitting at Carr Valley Cheese Factory in Mauston. 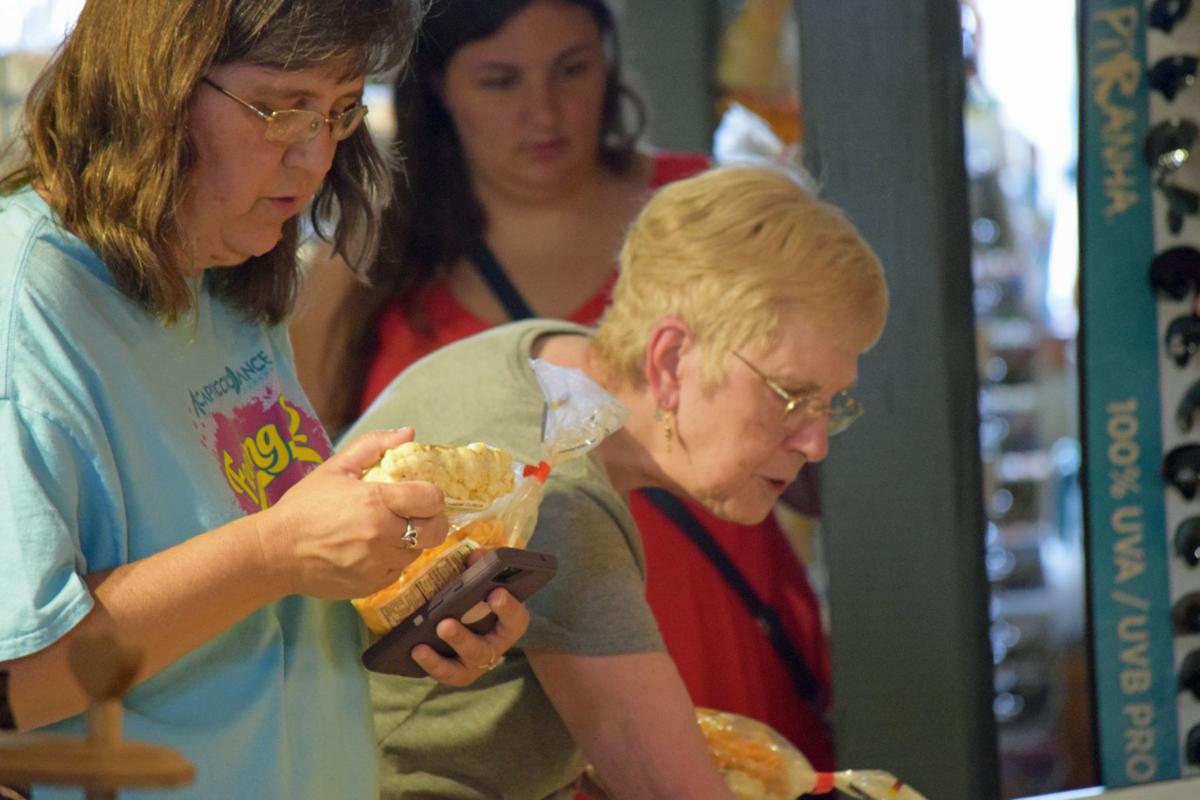 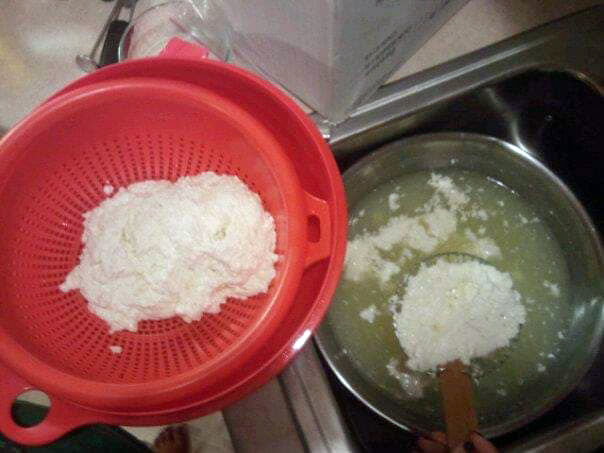 Leslie Johnson separates the curds and whey while making mozzarella. 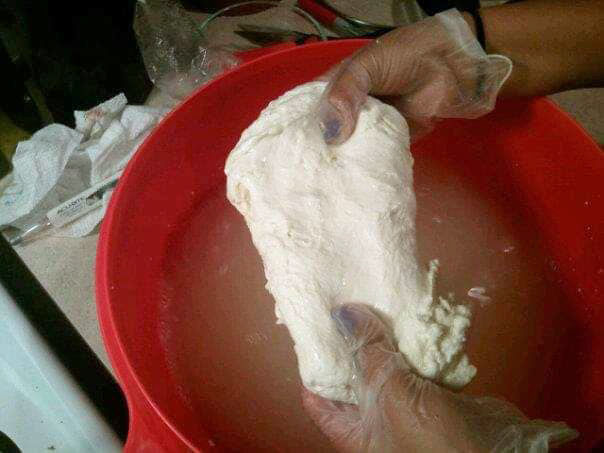 Leslie Johnson stretches and pulls the cheese curds to transform the curds into mozzarella. 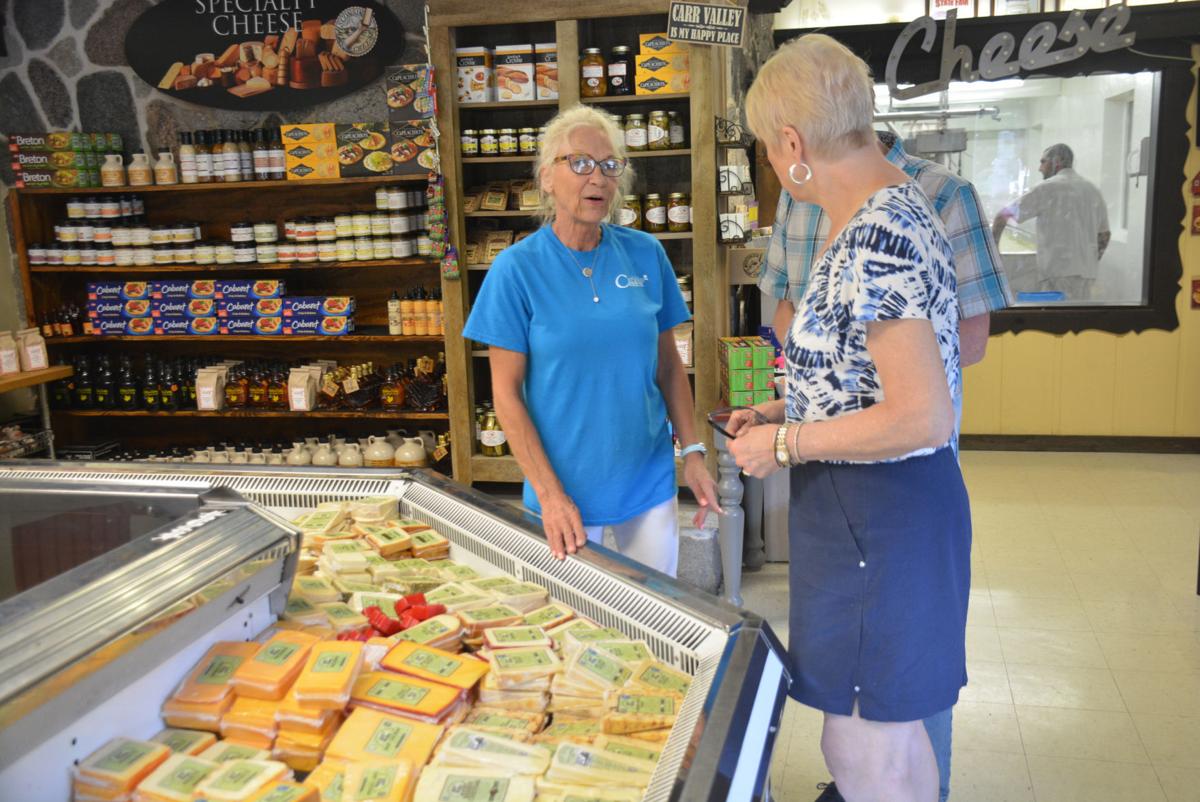 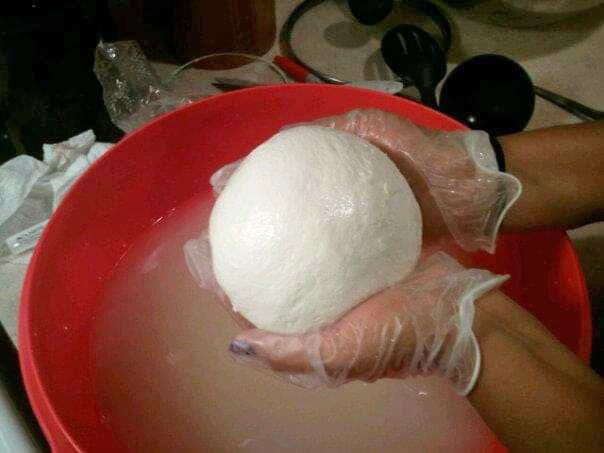 Leslie Johnson holds a completed ball of mozzarella after completing the about one-hour long process of turning milk into the cheese. 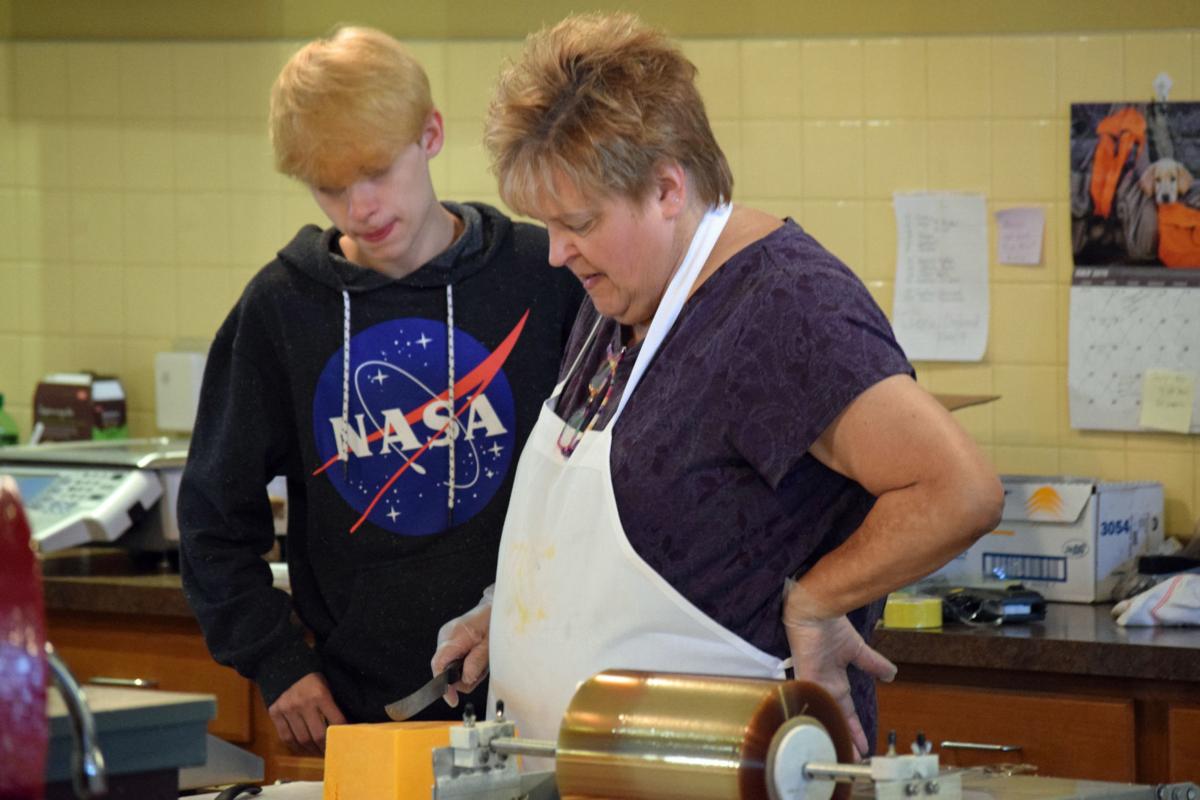 An employe gets to work on a fresh block of cheddar. 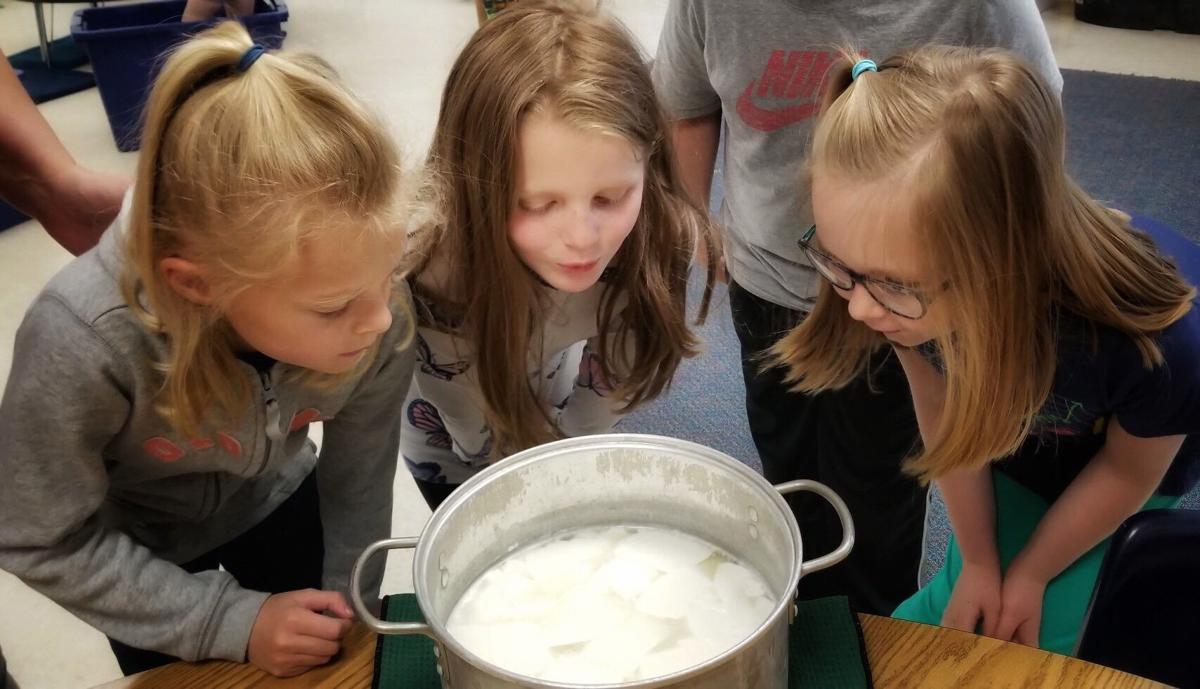 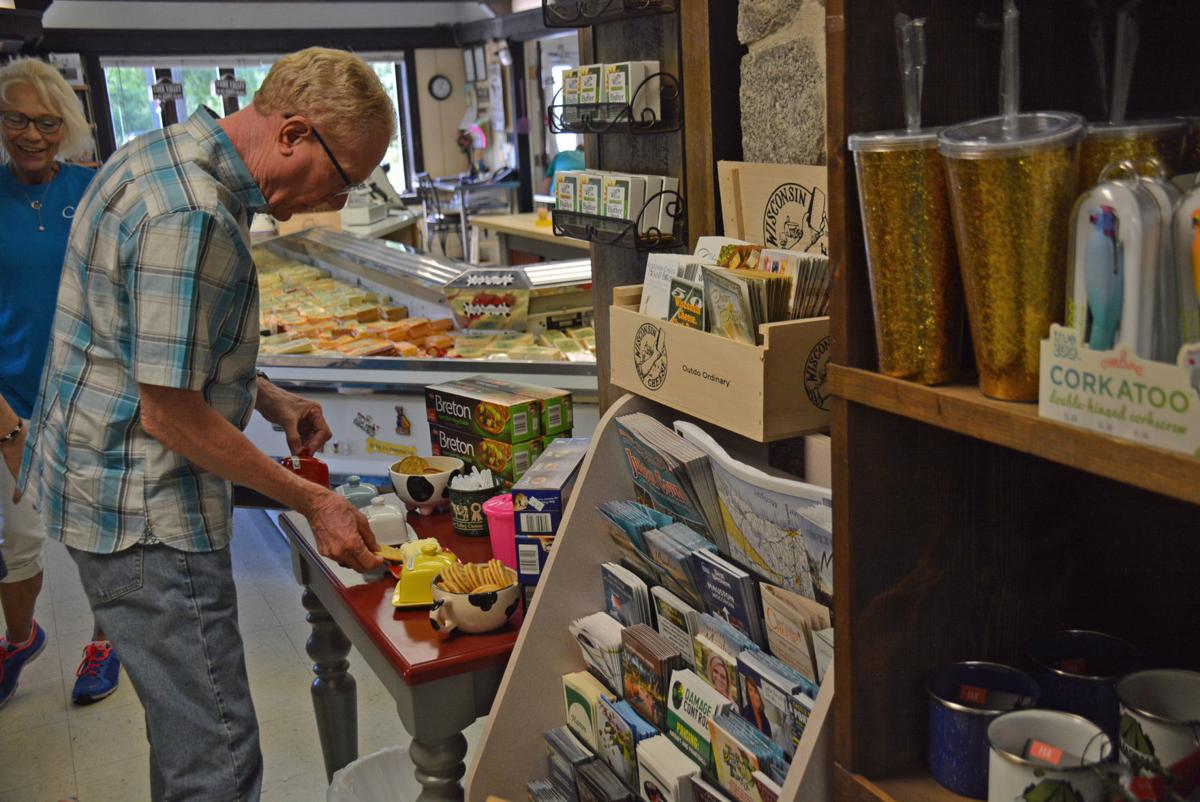 Wisconsin is the cheesiest. For over 100 years, the state has led the country in the production of cheese, producing billions of pounds of cheese each year. People are known as cheeseheads, with iconic hats to match.

Jenna McCann, a Multi-age Elementary Educator and K-5 Music Specialist at Merrimac Community Charter School in the Sauk Prairie School District, uses cheese to teach Wisconsin history, math, science, and reading to her 40 first and second grade students. McCann has made cheese with her students for the previous 12 years.

“We use projects to connect everything we are teaching,” McCann said. “It’s the same reading, same writing, same math as all of the other elementary schools, but then we use projects like making cheese to tie it all together.”

McCann’s class has cooking every Wednesday at 1 p.m., and she says she is always on the lookout for cooking projects that tie in with literacy or a science concept the class is working on.

When the class reads “The Lion, the Witch, and the Wardrobe,” they cook Turkish Delights. When they read “Dragons Love Tacos,” they make tacos while taking extra care to ensure the salsa is not spicy, since the dragons in the book do not like spicy tacos. When they read “Little House in the Big Woods,” the class makes cheese.

“The nice thing about cheese is it covers the gamut… It’s got the whole package with its Wisconsin history; it really applies to rural Wisconsin,” McCann said. “In that book, when ma makes the cheese, we make cheese, and we take a look at how that process hasn’t really changed from 200 years ago. We use a lot of math, fractions, elapsed time, reading the thermometer, and science because you’re turning a liquid into solid.”

McCann and her class make mozzarella cheese, as the cheese takes only about an hour to make.

First, the class heats the milk, and then adds rennet.

“In the old days you got rennet from the stomach lining of the calf that has never eaten grass, so in the book they have to kill a calf before they can make cheese, and this is a discussion in and of itself,” McCann said. “Fortunately, nowadays you can get it on the internet.”

They let the mixture set while a chemical reaction starts separating the curds from the whey.

“Basically you have a change in what the proteins and fats are doing, and they start to split,” McCann said. “And so we talk about little miss muffet, who sat on her tuffet, eating her curds and whey. And these kids, they learn those things by rote, but they don’t really understand them, so these projects bring understanding of little things like that which is a side benefit.”

After the curds and whey separates, they heat the curds again, drain off the whey, and then start to form the cheese.

“If you start stretching and pulling it, you’re going to get a fresh mozzarella kind of like string cheese,” McCann said. “Or, if you press it into a mold, like what Ma does in the book, then you get whatever shape your mold is.”

McCann says that if something goes wrong during the process, the “worst case” is the class has fresh ricotta cheese.

“That leads directly into lasagna,” McCann said. “So life is good.”

Once the cheese cools, the class enjoys some fresh mozzarella. The kids have the option of tasting the whey, and then the class discusses possible industrial uses for the byproduct, like sports drinks.

“For kids, if you feed them, they will learn… We try to make food connections whenever we can, because the kids really do remember it better,” McCann said. “We live in Wisconsin, people should know how to make cheese, or at least have a basic understanding.”

Like McCann, Leslie Johnson of Reedsburg grew curious about making cheese after taking a class at the library.

“Seven years ago at the Fermentation Fest they had a cheese class, where Carr Valley Cheese came and offered a course at the library so you could nibble on their cheeses, and they explained how they made the cheese,” Johnson said. “From there, I started doing some reading and figured out how to make mozzarella cheese, and ricotta cheese from the whey, and I started making yogurt with milk as well.”

First, she heats a gallon of milk to 160 degrees, and then adds vegetable rennet and citric acid which makes the milk curdle, and then rise to the top. She separates the whey and the solids, gathers the solids, and places it in a brine to cool it down. She then forms the solids into a shape, stretches it, and then molds it into a ball. The process makes about 1 pound of fresh mozzarella.

“The best is in the summer, when you have fresh tomatoes and basil and put it in a salad,” Johnson said. “But basically, you can do it however you want; you can bake with it instead of using low-moisture mozzarella; make anything Italian; fresh pizza; lasagna. It’s so yummy.”

Johnson uses the cheese only for her own consumption, as she notes that it is illegal in Wisconsin to manufacture cheese unless you have a license and then get the cheese approved by the USDA.

Wisconsin is the only state in the country that requires cheesemakers to have a license to sell their cheese. The process can be costly, with classes costing a few thousand dollars, hundreds of hours of time interning under a licensed cheesemaker, and passing a written test. Numerous other states, including Michigan, which Johnson moved to Wisconsin from, have cottage laws that allow individuals to make low-risk foods in their homes for sale as long as they are labeled as not approved by the USDA.

“We’re known for our cheddars; we have one-year mediums up to 14 years old,” Bever said. “People also like a lot of different flavored curds. We have about 25 different ones, which although they are all cheddar, they’re flavored like buffalo wing, tomato basil, jalapeno, or garlic and dill.”

Market Square Cheese sells over 100 tons of cheese every year, with their busiest months during the summer from April to September, and they give away a few more tons in samples to visitors.

Bever recommends that visitors try new varieties of cheeses. The store carries a variety called the morning sun, which is a mix of cheddar and gruyere, and a little known butter cheese called Butterkäse.

“It’s a one month cheese that is rich and buttery,” Bever said. “It’s perfect for grilled cheeses.”

Sid Cook, owner of Carr Valley Cheese and certified master cheesemaker, is the most decorated cheesemaker in the entirety of North America, and has been crafting cheeses since he first got his license at 16. Since 2003, the company and Cook have received over 300 awards for their cheeses.

At the Mauston factory, two licensed cheesemakers work 12-hour shifts “on an easy day” to ensure that there is a steady flow of cheese for the 100s of visitors who sample and purchase the products each day.

Jason Wegel, one of Mauston’s licensed cheesemakers, has worked at Carr Valley for about two years.

While some of the process is automated, Wegel and the other cheesemakers still perform a lot of the process by hand, including pulling the cream and stirring the vats to make sure the cheese does not knit.

“The process has been perfected over the last hundred years,” Wegel said. “But we still use a lot of the older ways, where some of the other companies use enclosed vats and the entire process is mostly automated.”

One of the most popular products at Carr Valley is the cheese curds. T

he process for making the curds starts with insulated tanker trucks picking up milk from Wisconsin dairy farms daily. After the milk is delivered to a factory, the milk is tested, and then weighed and heated or pasteurized.

The milk is pumped into a large vat, where rennet, starter cultures, and enzymes are added, which thicken the milk and add the cheese flavor. Cheesemakers then cut the “custard-like” milk into tiny pieces, and separate the liquid whey from the solid curds. The mixture is then stirred and cooled, until it reaches the right level of firmness for the type of cheese to be made.

Whey is then drained from the mixture, which is saved for other uses. Depending on the type of cheese being made, the curd is cut and then handled by the cheesemaker. For cheese curds, the matted curd is milled into bite-size pieces, and salted, stirred, and packaged.

Besides curds and standard cheeses, Carr Valley sells more than 50 original varieties of cheese, along with a variety of butters, cheese spreads, and cheese-related products.

For Wegel, making cheese at Carr Valley is fulfilling.

“Before I got into cheesemaking, I never gave much thought to the process, I just ate cheese,” Wegel said. “But when you get down to it, everything about making cheese is interesting.”

Jason Wegel stirs a vat of what will eventually be cheese to prevent knitting at Carr Valley Cheese Factory in Mauston.

Leslie Johnson separates the curds and whey while making mozzarella.

Leslie Johnson stretches and pulls the cheese curds to transform the curds into mozzarella.

Leslie Johnson holds a completed ball of mozzarella after completing the about one-hour long process of turning milk into the cheese.

An employe gets to work on a fresh block of cheddar.