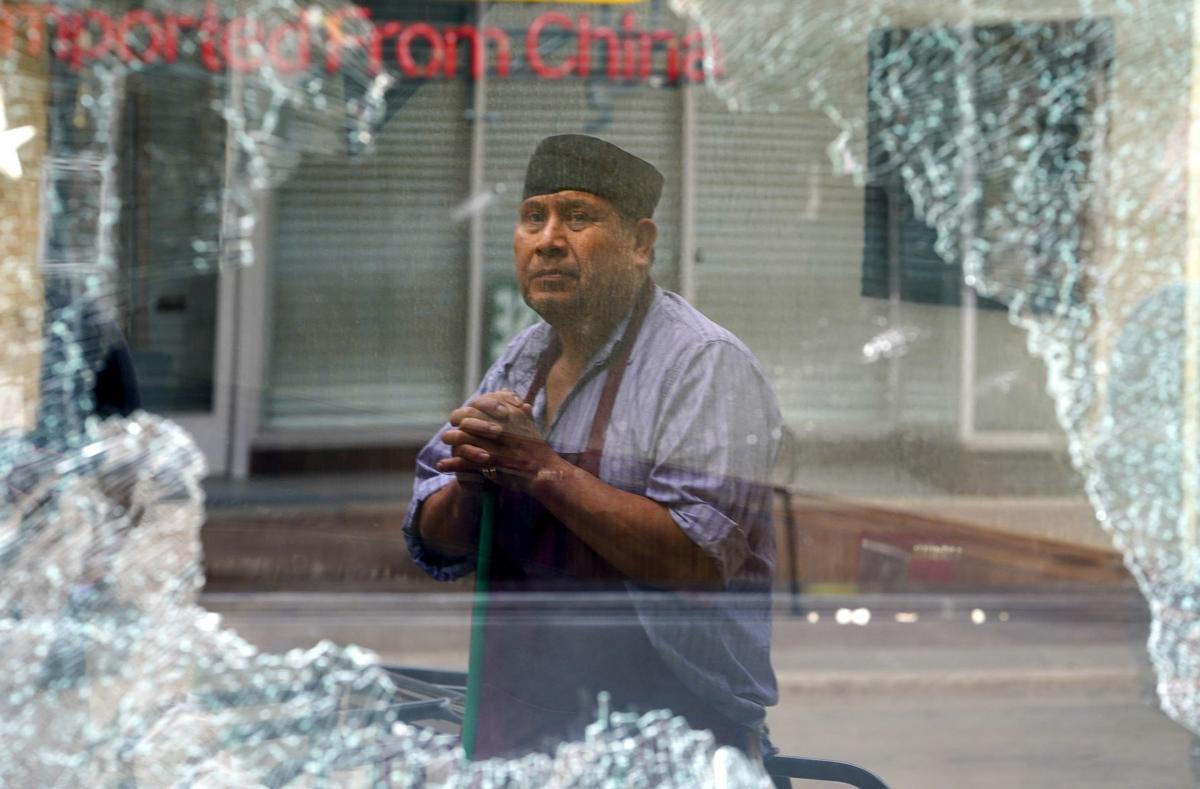 Silvestre Mendez, is reflected in a remaining pain of glass in the front window of Rising Son's Deli on State street. The first pane was broken Sunday night. Clean up continued Monday for State Street businesses that were damaged during the second night of protests in Downtown Madison. 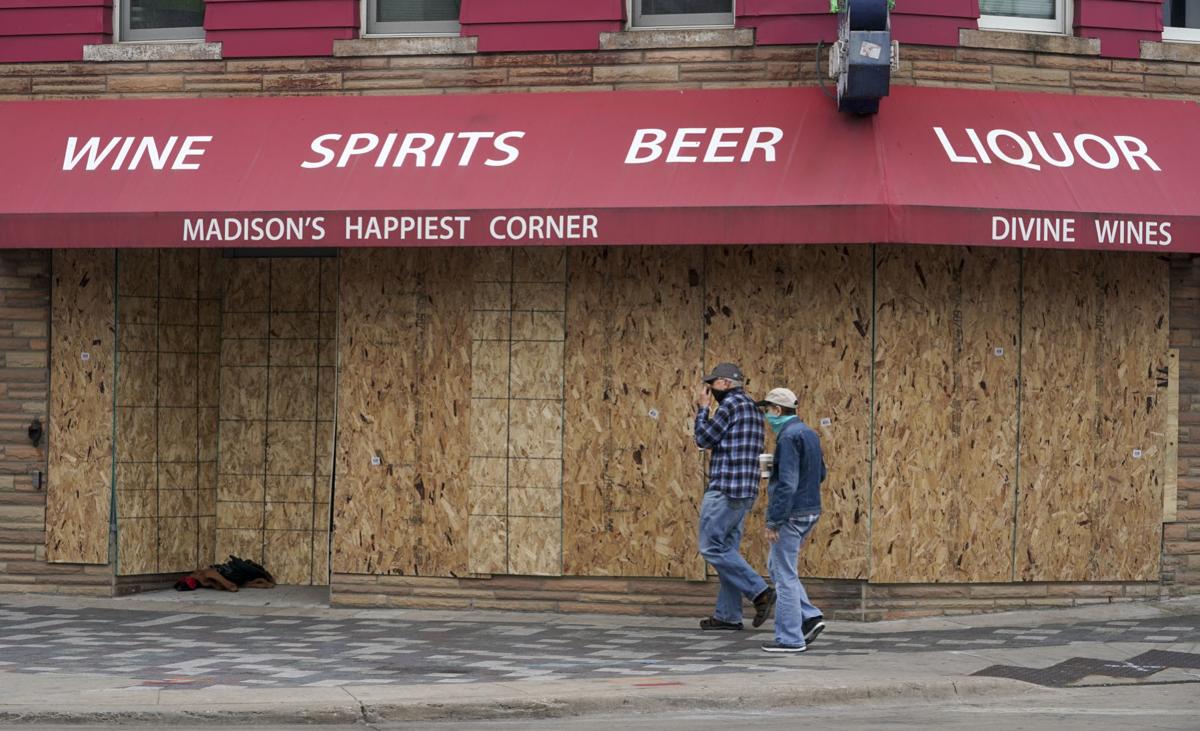 Divine Wines was boarded up after the weekend protests. Clean up continued Monday, June, 1, 2020for State Street businesses that were damage during the second night of protests in downtown Madison. STEVE APPS, STATE JOURNAL 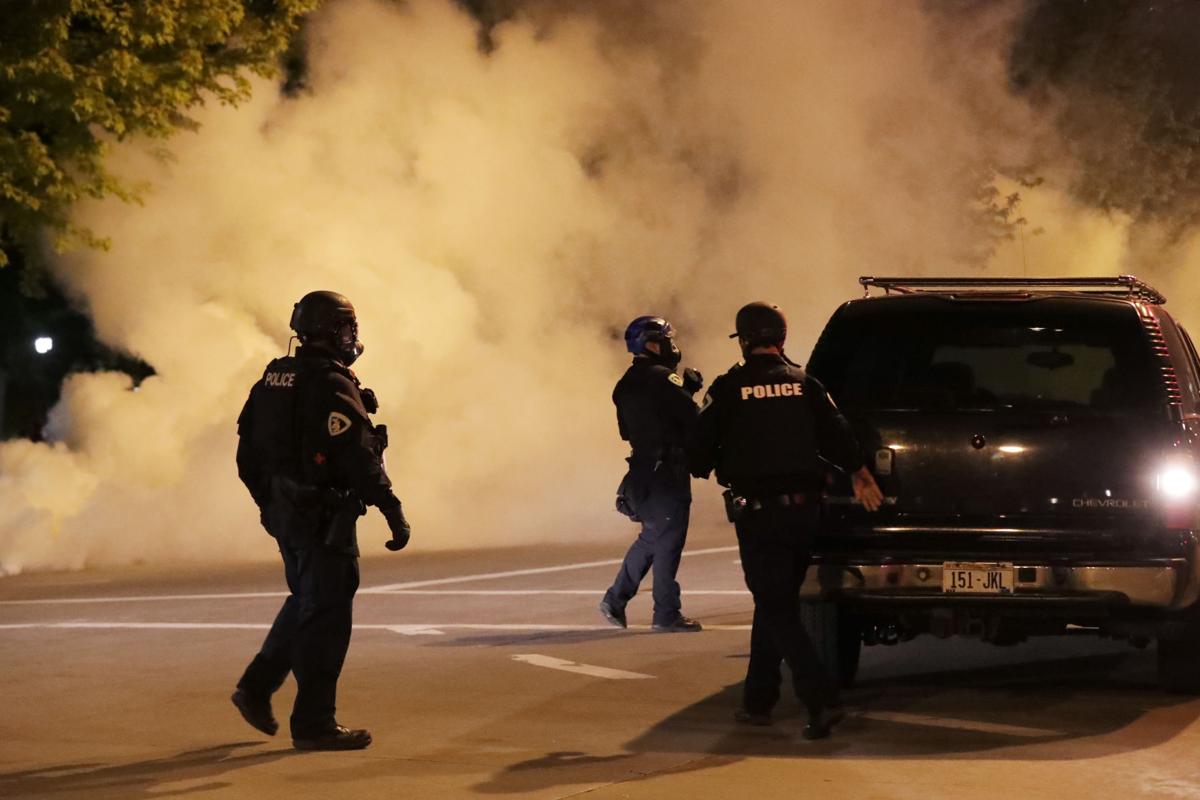 Another peaceful protest Sunday over the death of black man in police custody in Minneapolis last week ended in violence in Madison, with property damage, looting, attacks on police and 15 people arrested, police said.

Police also say an intoxicated man who had been with protesters accidentally shot himself in the leg.

For the second night, protesters engaged with police and police responded with tear gas Downtown. Protesters were calling attention to the death of George Floyd, who died after Minneapolis officer Derek Chauvin held him down on the ground with his knee on Floyd's neck as Floyd cried "I can't breathe." Bystander video of the incident has gone viral and Chauvin has since been charged with third-degree intentional homicide.

Police said protesters marched for several hours on the Capitol Square and State Street beginning around 6 p.m. Sunday, growing in size to several hundred and with some protesters throwing rocks at officers.

The action continued after the city's 9:30 p.m. curfew, which officers on the ground initially decided not to enforce, according to Lt. Kipp Hartman. After protesters surrounded a group of officers in standard uniform at about 11 p.m., items were reportedly thrown at the officers and one person struck an officer in the face. Shortly after that, additional officers responded to the area and chemical agents were dispersed.

Police ultimately arrested 15 people, including one who was allegedly looting with a handgun. Police said several others attempted to steal a police squad car.

At about 2:15 a.m. Monday, Madison police and Dane County Sheriff's deputies responded to a call about shots fired near the parking ramp at South Fairchild and West Doty streets and found a man who had unintentionally shot himself in the leg.

Deputies applied a tourniquet to the man's leg and the Madison Fire Department took the man to a local hospital, Madison police said.

The man, whose name was not provided, was arrested for being a felon in possession of a firearm and intoxicated use of a firearm. Police say the man and three friends who were with him were part of the group of protesters and looters in the Downtown area.

More protests could occur Downtown Monday after three local activist groups promised to "immediately take action" after a press conference at noon on the "local uprising" and plans for a "week of action."

Freedom Inc., Urban Triage Inc. and the Party for Socialism Liberation are seeking to "bring attention to the rampant police murders of Black people and to challenge systems of power that produce anti-Black police terrorism," according to a statement from the groups.

The groups are also calling on authorities to "immediately seize and abolish police force powers and acknowledge safety structures that are pro-Black, pro-woman and girls, pro youth, pro-LGBTQI, pro-disabled, pro-immigrant and refugee community."

Shopkeepers, construction workers and a handful of volunteers were out Monday morning on State Street, where rioters hit some businesses that were left untouched Saturday, while returning to others for a second time.

“I don’t mind the protests,” said Shawn Murphy, manager of Insignia, which had windows broken and merchandise damaged for the second night in a row since the Badgers’ apparel store reopened on Saturday after being closed for more than two months because of the COVID-19 pandemic.

“This vandalism, all this other stuff is ridiculous,” Murphy said. “It makes no sense to me.”

'This morning is what Madison is': Hundreds help clean up after 75 stores vandalized

“Black Lives Matter” signs in the window didn’t protect Fontana Sports Specialties on Henry Street, where vandals smashed the front door and took what co-owner John Hutchinson estimated was thousands of dollars' worth of merchandise.

Hutchinson said he supports the cause of racial justice, but “this is beyond the protest.”

“This doesn’t solve anything,” said his wife, Judith Hutchinson.

“I’m a black man,” he said. “This window was basically broken in support of my right to live, although it was done under the wrong pretenses.”

Robinson, who attempted to stop people from smashing the windows of Goodman’s Jewelers after Saturday’s protest, attributed the vandalism to years of systemic racism.

"Once again, we heard the words 'I can't breathe, I can't breathe," Carter and Alds. Patrick Heck, Lindsay Lemmer, Shiva Bidar, Marsha Rummel, Donna Moreland, Arvina Martin and Keith Furman said. "Again, those words are met with silence by the officers present at the scene."

"We know that not all police officers are evil," the statement said, "but Officer Derek Chauvin’s actions were deplorable, horrific and infuriating. We also deplore the actions of the officers who stood by, did nothing and expect them to be held accountable as well with charges."

The council members said they "ask and expect of all police departments is to hold yourselves accountable."

The Food and Drug Administration has granted priority review to an application for StrataGraft, a regenerative tissue developed by a Madison company as an alternative to skin grafts in treating burns.

At 11:11 a.m. Thursday, balloons rose from Brittingham Park, drifting in the direction of the hospital where Anisa Scott was being taken off life support and later died from being shot in the head Tuesday in Madison.

The layoffs apply to System administration employees, not those working for one of the 13 universities.

IOWA CITY, Iowa (AP) — A rare storm packing 100 mph winds and with power similar to an inland hurricane swept across the Midwest, blowing over…

Enbridge Energy notified utility regulators Friday that it was withdrawing its application for the authority to take private property for its Line 5 reroute and announced Monday that it has negotiated rights for all the private land needed.

As an African immigrant, Baldeh campaigned with a focus on adding diversity to the state Legislature in order to tackle hard issues, such as racial and economic injustice.

State health officials on Friday added unconfirmed negative COVID-19 test results to part of their daily summary, following concerns that a backlog of negative tests was skewing data to make it look like a higher percentage of people was testing positive.

With no Republicans running for the district, Roys is poised to take the seat that Sen. Fred Risser — the longest serving lawmaker in the nation's history — has held for more than five decades.

Silvestre Mendez, is reflected in a remaining pain of glass in the front window of Rising Son's Deli on State street. The first pane was broken Sunday night. Clean up continued Monday for State Street businesses that were damaged during the second night of protests in Downtown Madison.

Divine Wines was boarded up after the weekend protests. Clean up continued Monday, June, 1, 2020for State Street businesses that were damage during the second night of protests in downtown Madison. STEVE APPS, STATE JOURNAL 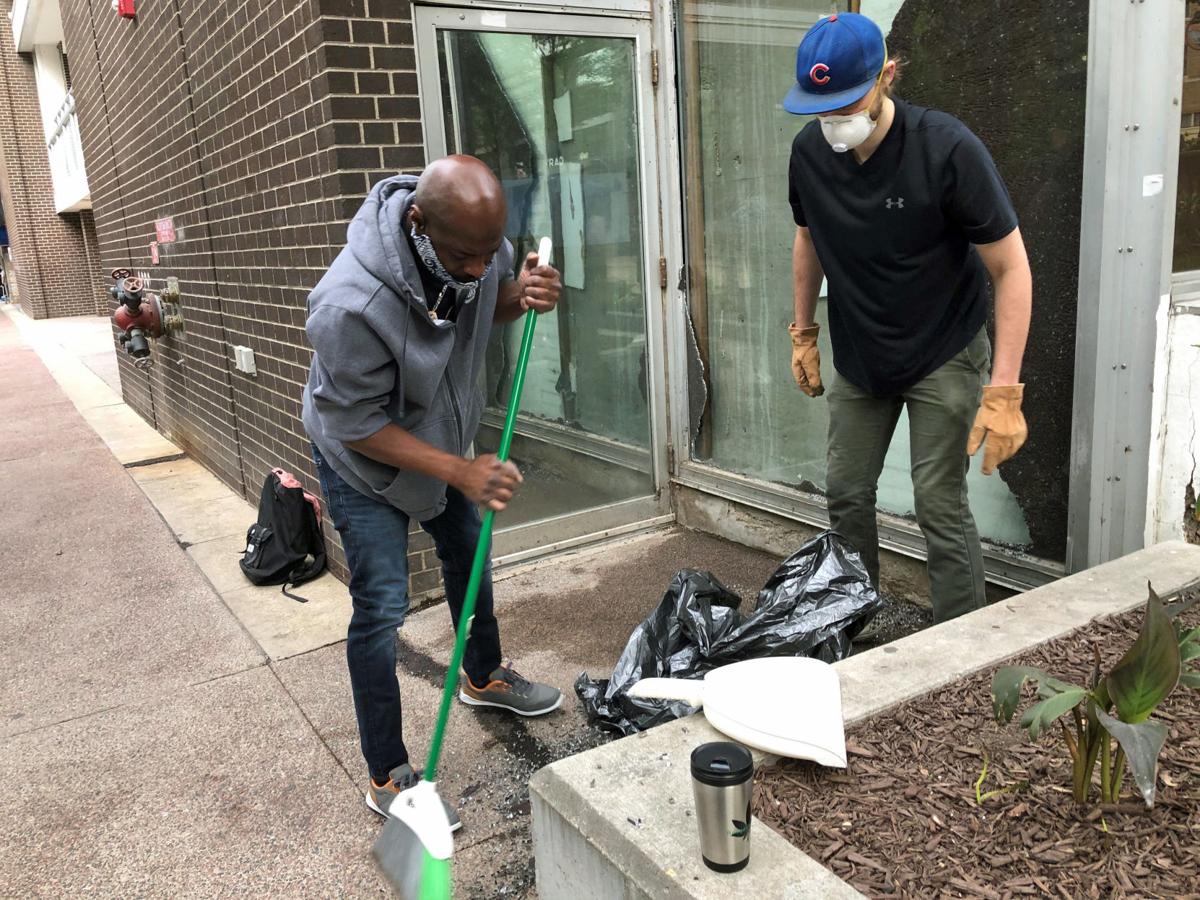 Alan Robinson, left, and Colin Malin clean broken glass Monday from the sidewalk at The Towers on State Street after a second night of rioting left windows broken and stores ransacked. 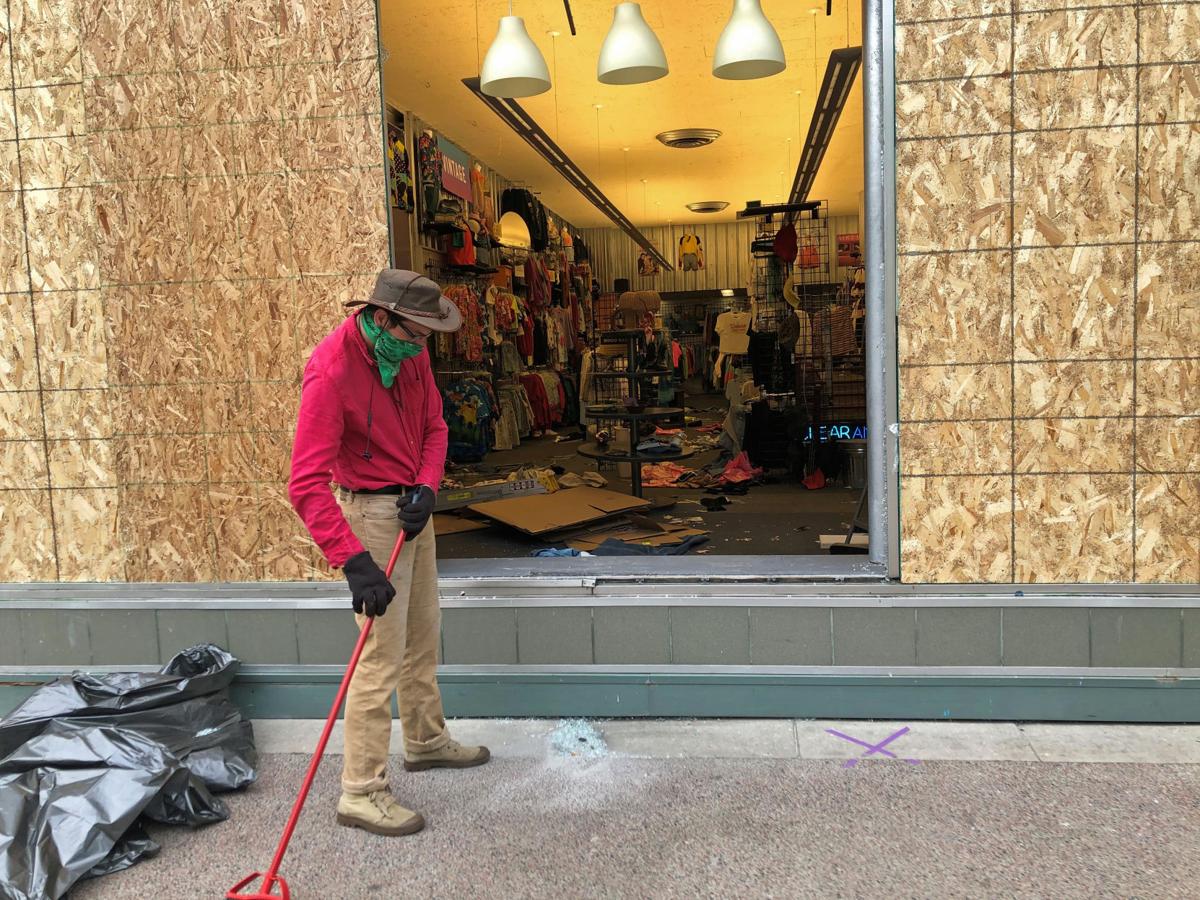 A volunteer sweeps broken glass Monday outside Ragstock on State Street. The store was vandalized for the second time in as many days after protests of racism and police brutality devolved into violence. 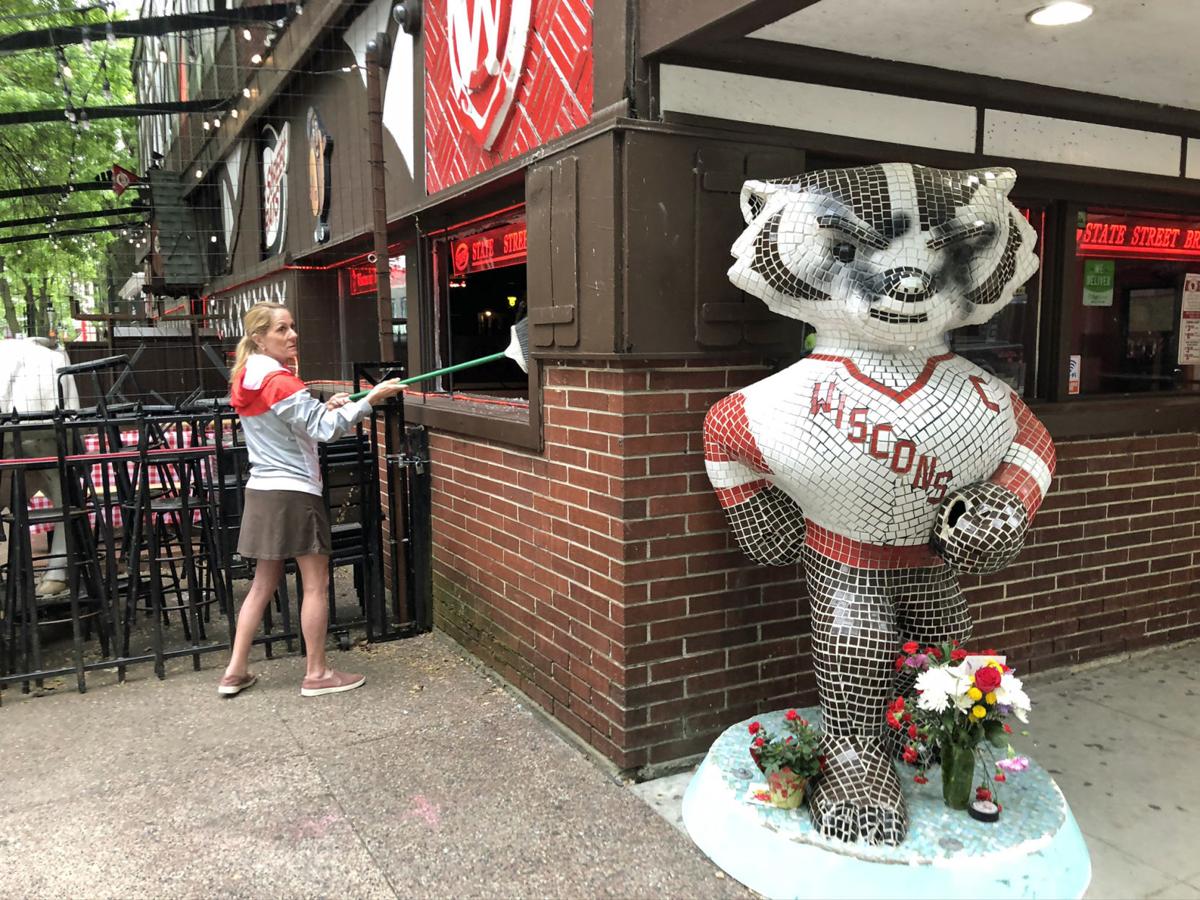 Sandy Meuer, owner of State Street Brats, clears broken glass Monday from a window of the restaurant, which was vandalized during a second night of rioting in Downtown Madison. 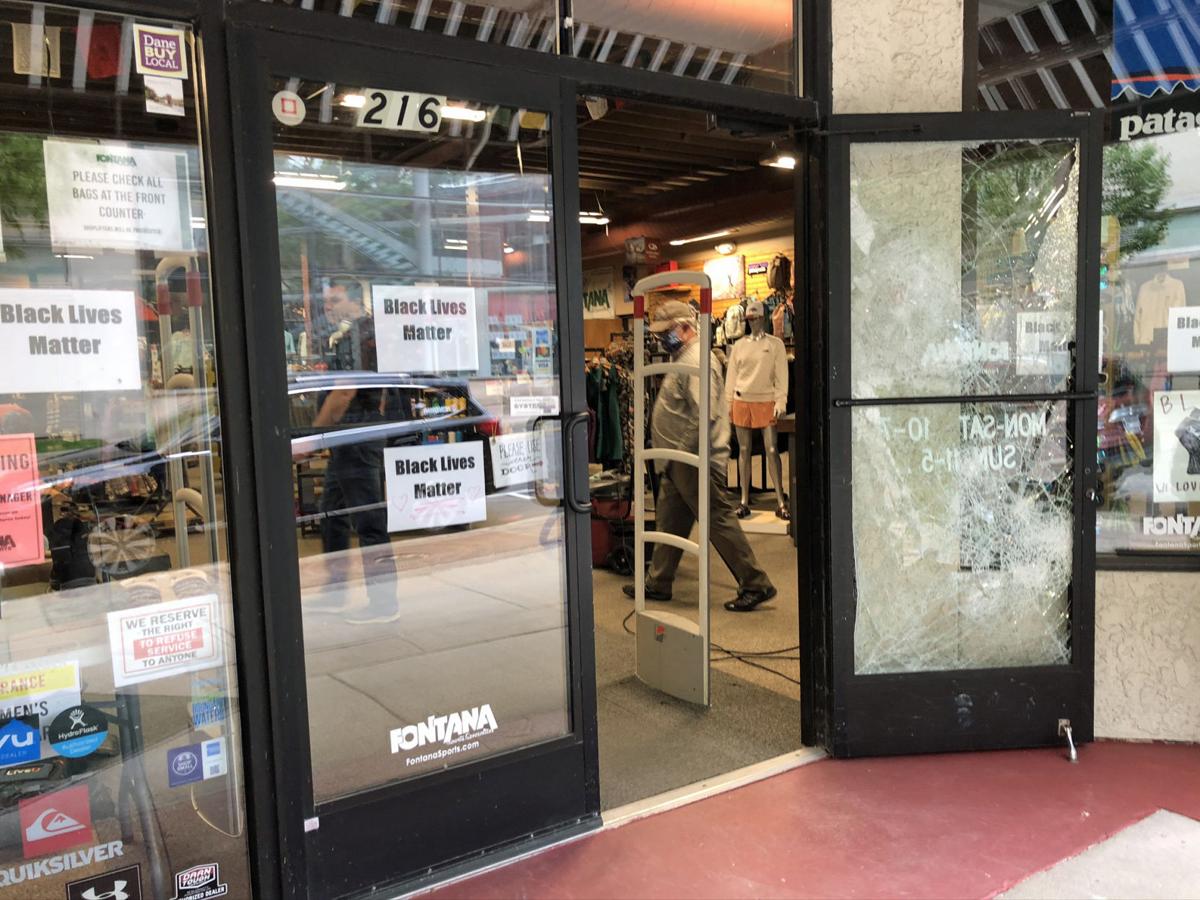 John Hutchinson walks through his Fontana Sports store on Henry Street Monday while cleaning up damage done during a second night of rioting in Downtown Madison following protests over police brutality and racism. 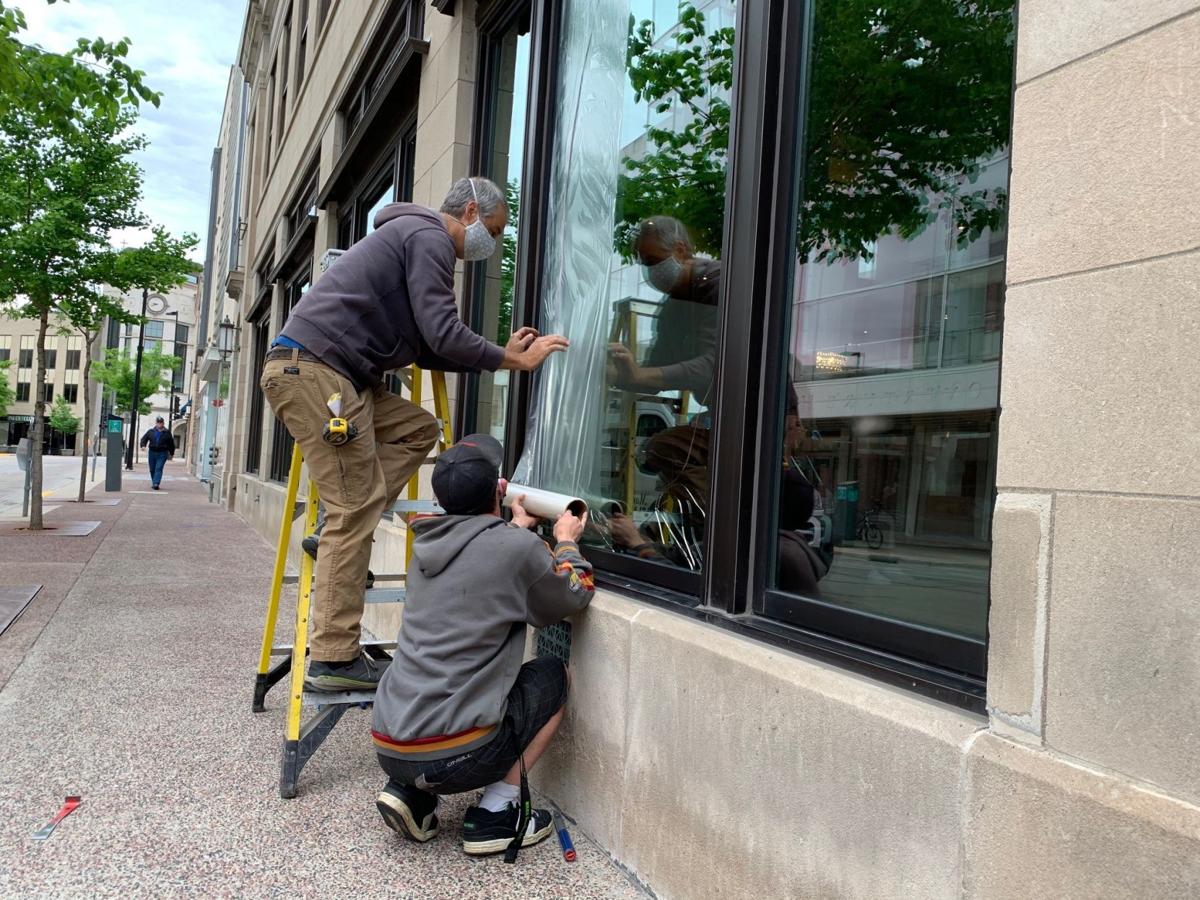