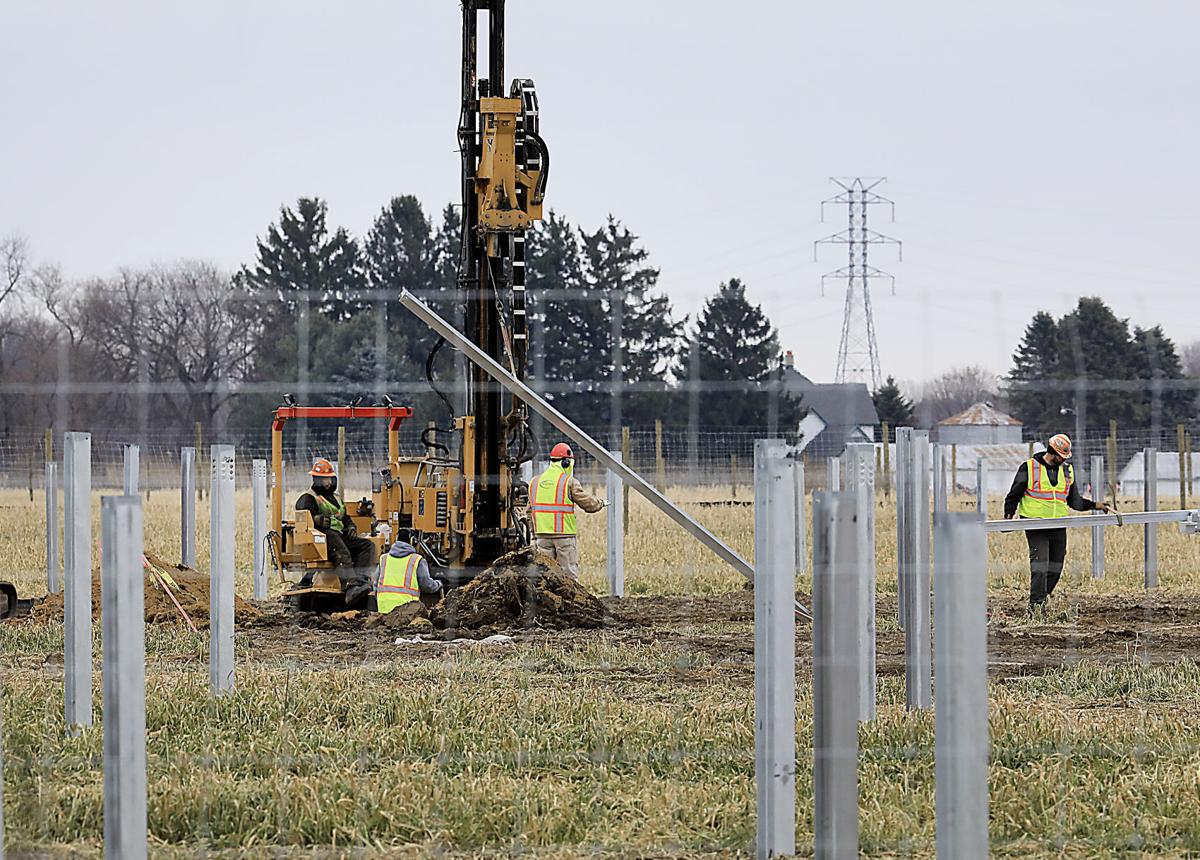 Workers, pictured in December 2020, install supports for solar panels at Madison Gas and Electric's 20-megawatt solar farm in Fitchburg. A new study found local economies benefit significantly more from the use of local laborers. MGE says it tried to use local labor wherever possible. 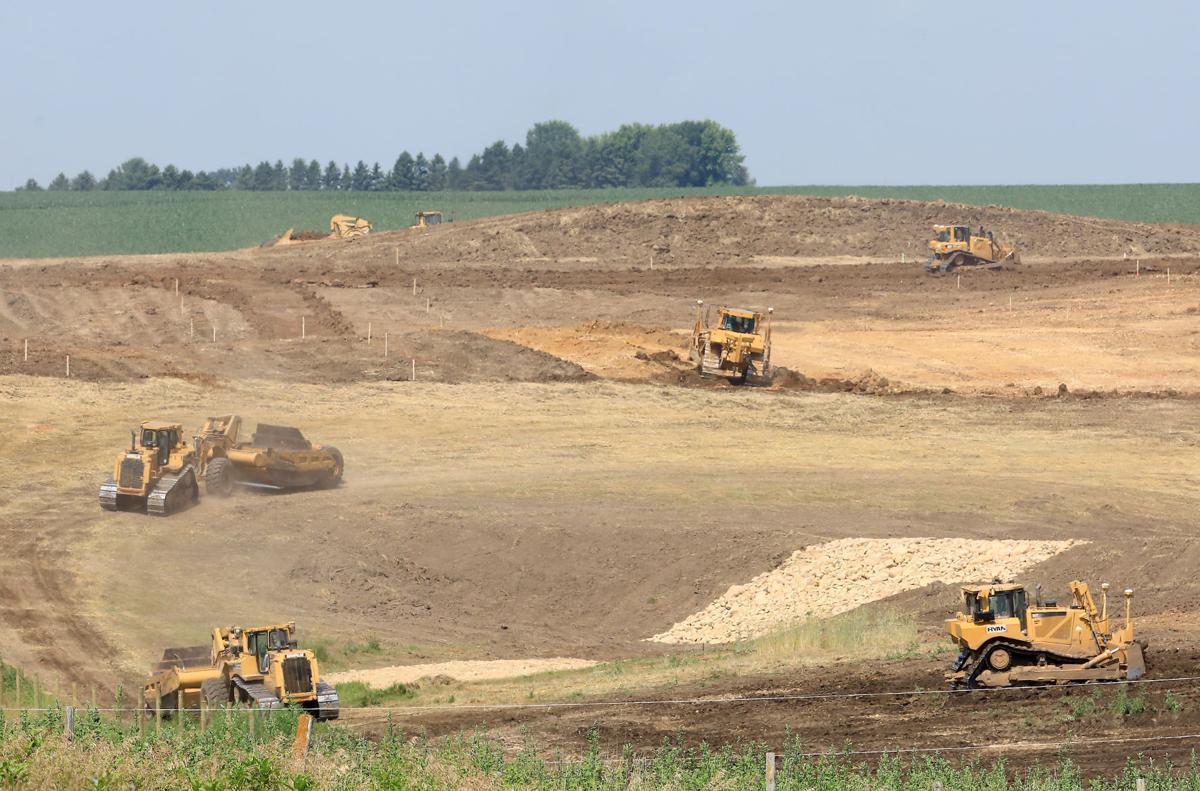 Earth movers prepare ground for the Badger Hollow Solar Farm near Cobb in July 2020. The project developer estimated it would support 422 local jobs, but labor groups say more than three quarters of the workers were from out of state. 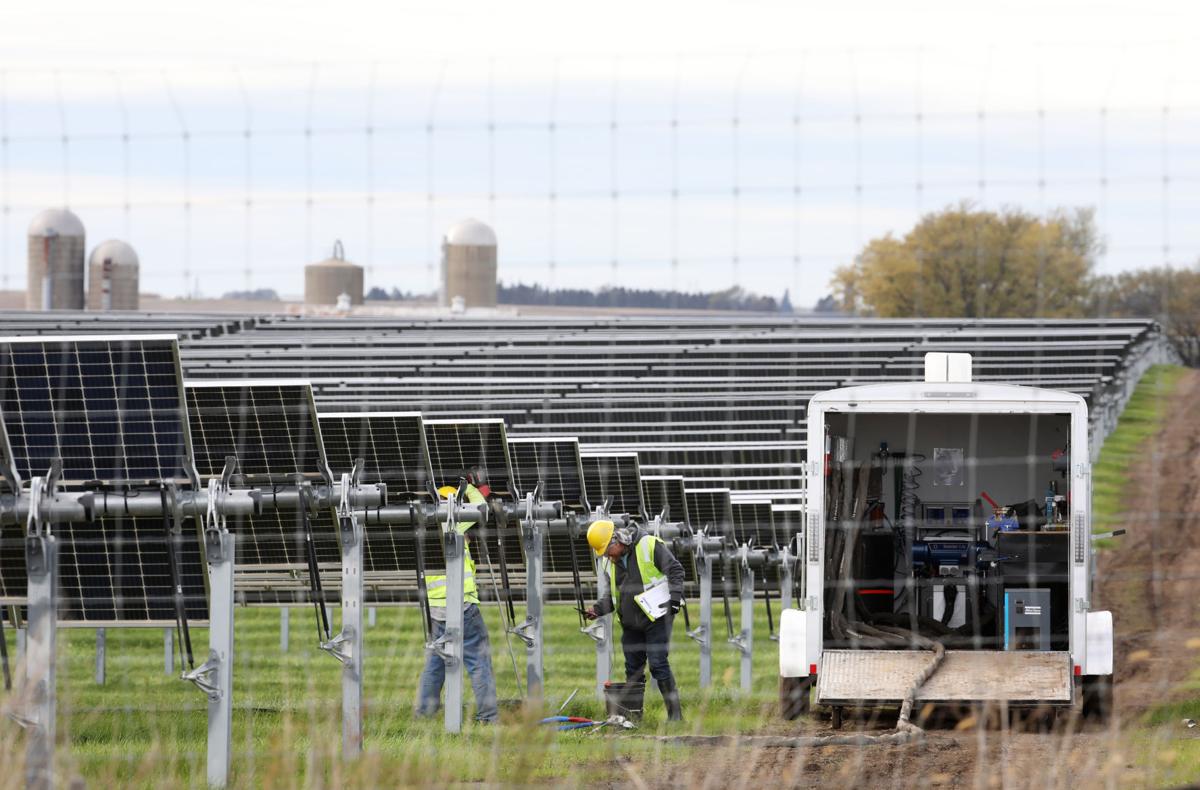 Workers toil at the Badger Hollow Solar Farm near Cobb Wednesday. Unlike previous construction cycles, when utilities built their own power plants, this time they are primarily relying on solar developers who often use out-of-state contractors.

With Wisconsin utilities on a multibillion-dollar solar spending spree, the state’s construction industry says local workers are getting passed over, and their communities are missing out on the ripple effects.

A new study found local workers can generate more than twice as much economic activity in their communities as out-of-state laborers, highlighting concerns over who benefits from all the spending.

Since Wisconsin residents and businesses will ultimately foot the bill for the utilities’ investments, they should stand to benefit from the economic impact of construction, said Robb Kahl, executive director of Wisconsin Infrastructure Investment Now, a nonprofit organization that promotes investment in transportation, energy, mining and other infrastructure.

“Most people would agree, given we have a very capable workforce,” Kahl said. “People are ready and willing to do this work. Those should be the people doing this.”

And unlike the fossil fuel plants they are replacing, solar farms don’t require a lot of workers to operate once they’re built.

“On the maintenance side, it’s a couple hundred people to maintain a coal facility. It’s five to 10 workers to maintain a solar field,” said Kent Miller, assistant business manager for the Wisconsin Laborers’ District Council. “The only time we’re going to be able to address the transition to renewables is during the construction phase.”

Conducted for Wisconsin Infrastructure Investment Now by Forward Analytics, the study released Wednesday is the first of its kind in Wisconsin to look at the relative differences between local and out-of-state labor, said author Dale Knapp.

“When we’re looking at a potential $2.6 billion investment, I wanted to know what’s the upside for the Wisconsin economy,” Kahl said.

In Wisconsin right now, there are 19 large-scale solar farms in the development or permitting stage, which together represent a 10-fold increase in the state’s current solar capacity.

Built with local labor, those projects would spur some $195 million in economic activity, Knapp found. Using out-of-state labor, the impact would be less than half of that.

That’s because workers spend most of their paychecks where they live: on rent and mortgage payments, buying groceries, paying taxes. Itinerant workers might spend a few hundred dollars a week on lodging and meals while sending most of their earnings back home.

And there are another 84 projects being studied by the Midwestern grid operator that, if developed, could represent more than $12 billion in additional investment.

“This is just the tip of the iceberg,” said Mark Meyer, a former state lawmaker and utility regulator. “There’s a lot more coming down the pike.”

Proposals to develop large-scale solar farms often come with the promise of hundreds of good-paying local jobs. But the record shows that may not always be the case.

“There’s no mechanism to hold the developers accountable to what they claim,” Miller said.

Unlike previous construction cycles, when utilities built their own power plants, this time around they are primarily relying on solar developers who often use out-of-state contractors.

“Wisconsin utilities have had a long tradition of using local labor,” Meyer said. “If the utilities themselves were building these, I don’t know that we’d have a concern.”

The concern is not just hypothetical.

Invenergy, the Chicago-based developer behind four of the largest solar projects, told regulators that a 300-megawatt solar farm in Iowa County would support 422 local jobs and more than $27.6 million in wages for the state.

But Miller said job site surveys performed by the laborer’s council found less than a quarter of the workers were from Wisconsin, and during the early days of the COVID-19 pandemic, the utilities that will own the plant reported concerns about bringing some 200 workers “from various parts of the United States” to the site.

Invenergy later reported the project was delayed six months because of “lack of performance” by an unnamed general contractor that had to be fired.

“We work with skilled clean energy contractors for the construction of the solar projects we develop,” Conley said. “These contractors share our commitment to completing projects safely, responsibly and on schedule. They also share our preference for hiring locally to the extent possible given labor availability.”

The majority of the state’s permitted solar farms have used a similar model, in which regulated utilities outsource planning and construction to a handful of specialized developers like Invenergy.

Alliant Energy, which is pursuing plans to invest nearly $1.5 billion in a dozen solar farms, is developing three of those projects in house. But the Madison-based utility hired Burns & McDonnell, a contractor headquartered in Missouri, to oversee construction.

Alliant spokesperson Tony Palese said the utility “is creating hundreds of good-paying jobs that are going to benefit workers, businesses and communities across Wisconsin.”

He noted that the contractor is relying on workers from Junction City, Eau Claire, Altoona, Stevens Point, Appleton and Princeton to build a 150-megawatt plant in Wood County.

Madison Gas and Electric spokesperson Steve Schultz said the utility asked developers on several Dane County projects, including the 20-megawatt O’Brien Solar Field in Fitchburg, to give preference to Wisconsin companies and hired local contractors for at least some of the work on all three. But Schultz said it’s hard to find local contractors for some of the specialized work.

Kahl said Wisconsin has the construction firms and labor to do the job, and he notes trade unions support apprenticeship programs to train new generations of workers.

“We have members that are sitting on the bench, waiting to find employers,” Miller said. “In addition we have applicants interested in getting into the trades. … They need employees to sponsor them.”

Bill Skewes, executive director of the Wisconsin Utilities Association, said the trade group is interested in any additional benefits to customers.

“To the extent it benefits our customers, we strongly support using local, in-state labor whenever possible,” Skewes said. “We trust the commission to make the right call on the question of what’s in the best interest of utility customers.”

Meyer, who served on the Public Service Commission from 2004 to 2010, said it’s not clear if the commission has the authority to require the use of local contractors or labor.

“I think it’s something that will be tested in court,” he said.

But the commission did require, over objection from Commissioner Ellen Nowak, the developer of a 200-megawatt plant in Grant County to report back four times a year on its efforts to fill some 250 to 350 jobs with local workers.

Meyer said that should be standard practice.

“If Wisconsin ratepayers are going to be paying for these projects, Wisconsin laborers and communities should be benefiting,” Meyer said. “We’re paying the bill.”

Rainy into Friday morning for southern Wisconsin, nice weekend to follow, before cold moves in

It will stay dry early next week, but highs will plunge into the 40s as the coldest weather of the season moves into southern Wisconsin, according to forecasters.

Workers, pictured in December 2020, install supports for solar panels at Madison Gas and Electric's 20-megawatt solar farm in Fitchburg. A new study found local economies benefit significantly more from the use of local laborers. MGE says it tried to use local labor wherever possible.

Earth movers prepare ground for the Badger Hollow Solar Farm near Cobb in July 2020. The project developer estimated it would support 422 local jobs, but labor groups say more than three quarters of the workers were from out of state. 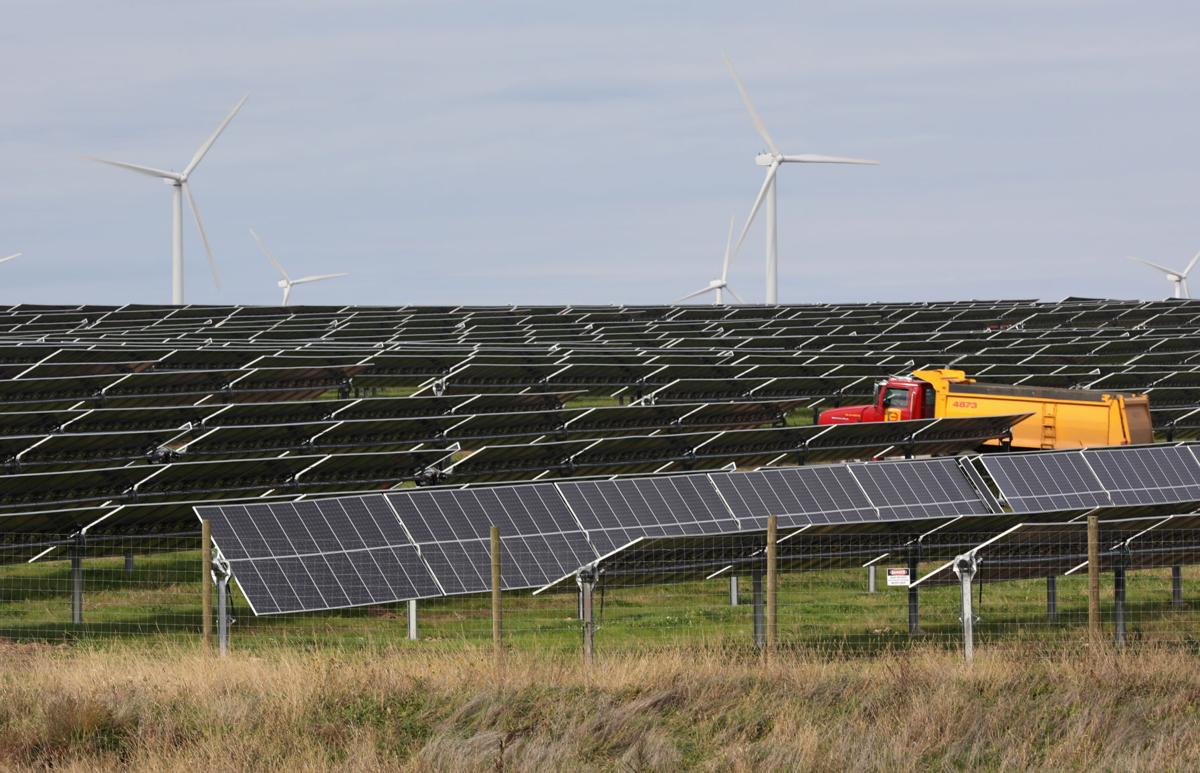 Thousands of solar panels make up the Badger Hollow Solar Farm near Cobb, which will be owned by We Energies, Wisconsin Public Service Corp. and Madison Gas and Electric. 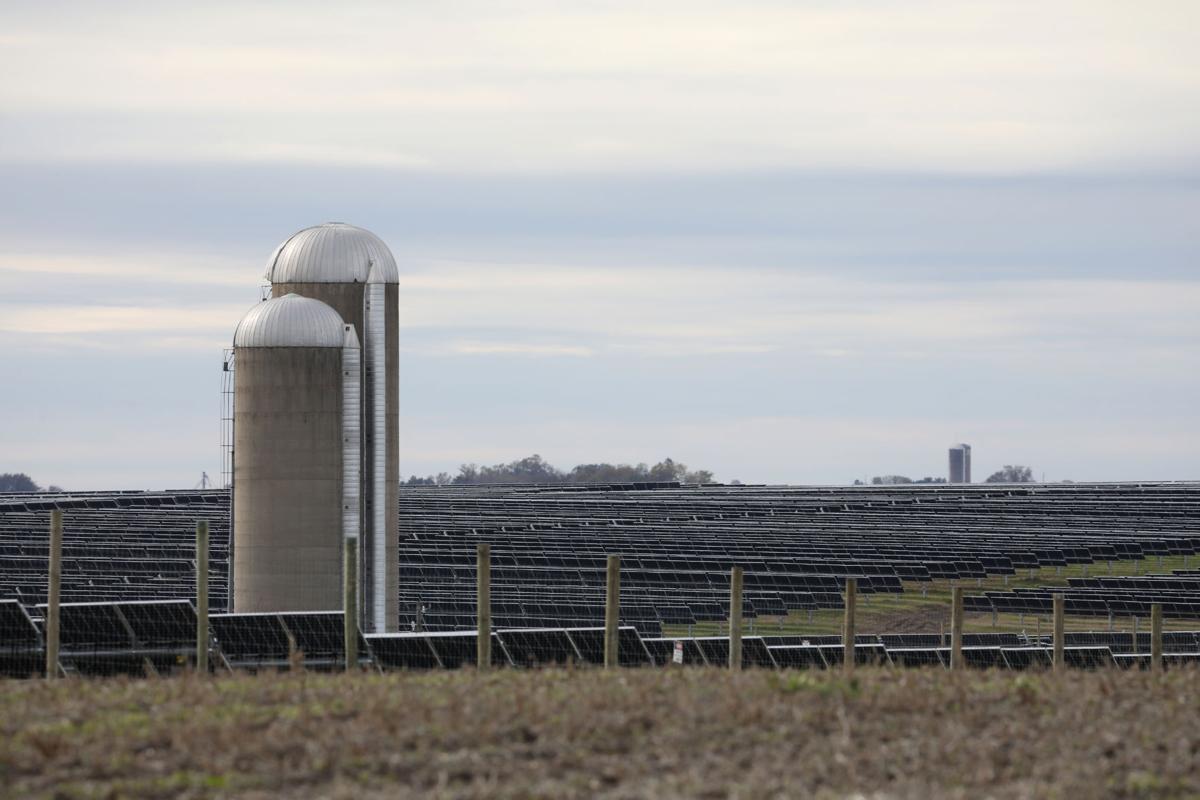 Thousands of solar panels have been installed at the 300-megawatt Badger Hollow Solar Farm near Cobb. The first half of the project is scheduled to be completed this month. 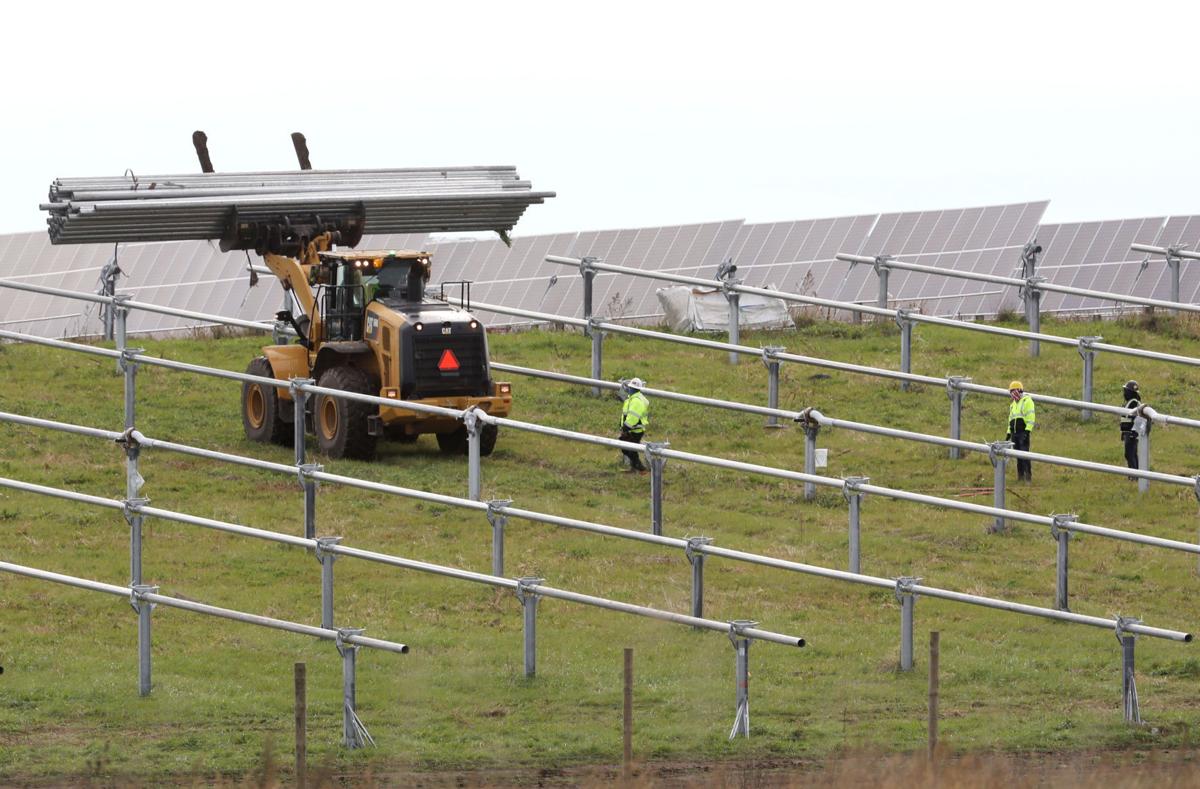 Workers toil at the Badger Hollow Solar Farm near Cobb Wednesday. Unlike previous construction cycles, when utilities built their own power plants, this time they are primarily relying on solar developers who often use out-of-state contractors. 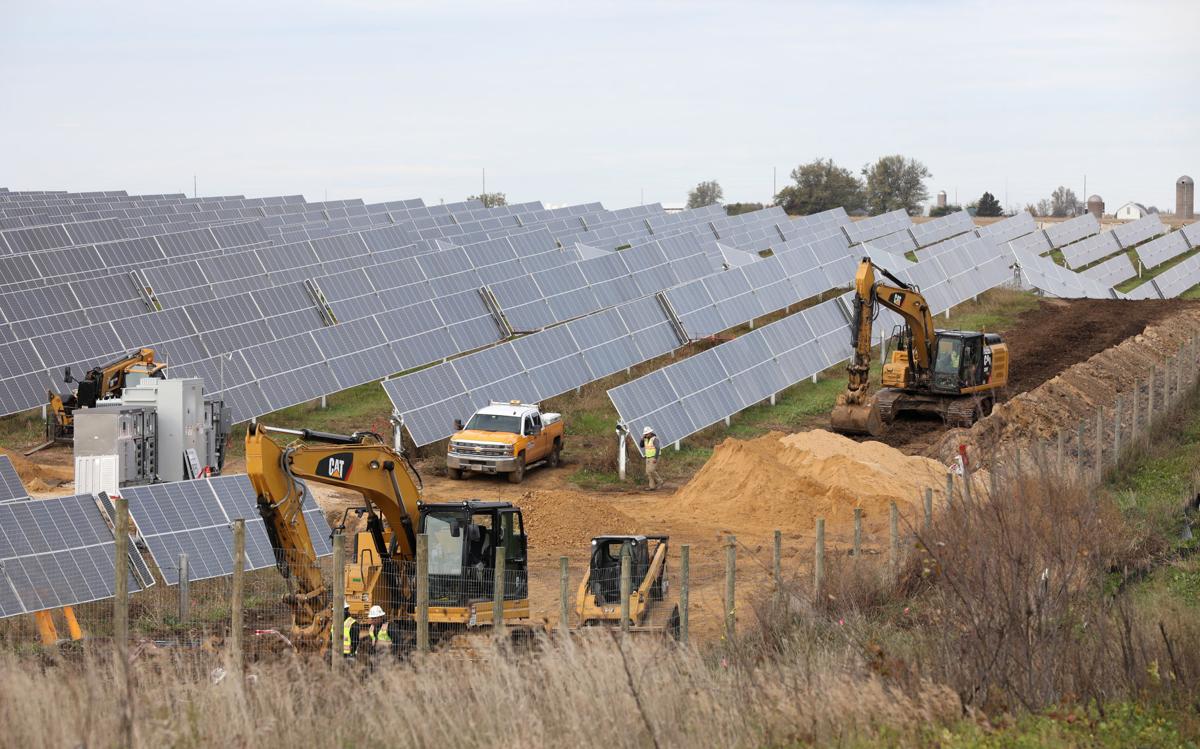 Construction continues at Badger Hollow Solar Farm near Cobb. Labor unions say despite the promise of 422 local jobs, many of the crews at the 300-megawatt solar project are from out of state. 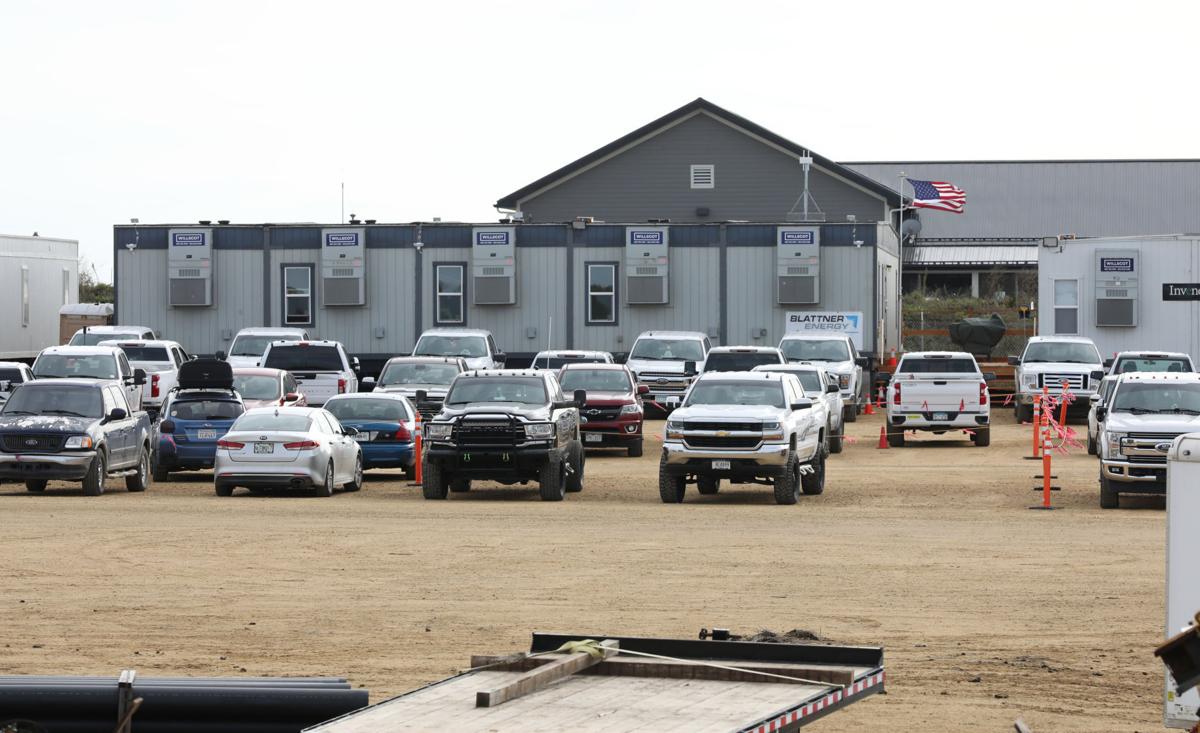 Vehicles fill the job site parking lot at Badger Hollow Solar Farm near Cobb. Solar energy development is creating hundreds of jobs, but Wisconsin construction and labor groups fear many are being filled with workers from other states. 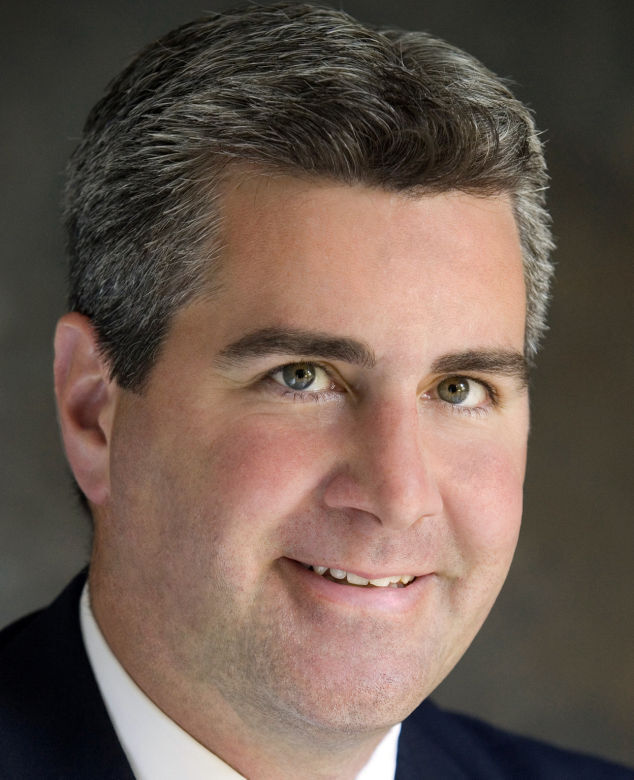 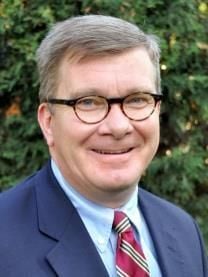