The board that oversees improvements at the state Capitol voted unanimously Monday to restore and re-install two statues on the Capitol grounds that were torn down by demonstrators last month.

A proposal floated by Boys & Girls Club president and CEO Michael Johnson to construct and install another statue on the grounds of the Capitol — a depiction of Vel Phillips, Wisconsin’s first African-American and female secretary of state — remains in the early stages. In order to act, the committee would need to see a formal proposal including project details and how it would be funded.

The State Capitol and Executive Residence Board’s approval means the Department of Administration is free to move forward with the restoration of “Forward” and the Col. Hans Christian Heg statue torn town by demonstrators in late June. It also allows for the Historical Society to set up an account for people to donate to the restoration effort. The rest of the project will likely be covered with private money from the restoration fund as well as partly covered by the state’s fine arts insurance policy, which has a $50,000 deductible.

Candidates pull ahead in fundraising in Madison area legislative primaries

The board’s meeting came after a month of unrest in Madison prompted by the killing of George Floyd by Minneapolis police. The two statues were torn down in Madison after the arrest of a Black activist earlier in the day and follows the toppling of Confederate statues and those depicting Christopher Columbus, among others.

The toppling of the “Forward” and Heg statues was more puzzling because of their symbolism of Wisconsin’s progressive history.

“Forward,” which has come to represent women’s rights and the state’s motto, and Heg, a Union Civil War colonel who died fighting to end slavery, were both torn down in what protesters said was a “strategic” move to bring attention to the state’s racial inequities. Protesters said the statues had whitewashed the state’s poor record addressing economic, educational and criminal justice system racial inequality.

Heg was a Norwegian immigrant who became an outspoken abolitionist and served in the 15th Wisconsin Regiment during the Civil War. He was killed at the Battle of Chickamauga in 1863, becoming the highest-ranking Wisconsin soldier killed in combat during the war. A statue of him, funded by donations from the Norwegian Society of America, had stood outside the Capitol since 1926.

The “Forward” statue is a replica of a Jean Pond Miner sculpture cast in 1893 and installed in the Capitol in 1895 that was designed as an allegory for devotion and progress, the embodiment of her home state. The original was moved from the Capitol grounds and installed inside the Wisconsin Historical Society headquarters building in 1998, and Wisconsin women funded the bronze replica.

Demonstrators wrapped chains around “Forward” to bring it down. A missing finger on the statue has not been recovered nor the threaded decorative nuts for the base. The original statue can be used to make castings to restore the damaged one.

The statue of Heg was torn down from its spot at the top of King Street and dragged into Lake Monona. The Department of Administration says the statue’s head has still not been recovered, and officials plan to recast it based on another statue located in the Racine County town of Norway. Further, the right boot of the statue is missing the spur. Investigations surrounding the incidents are ongoing.

Sen. Fred Risser, D-Madison, a committee member who stepped down as chairman of the board on Monday, said it is “imperative” that the two statues be restored and others agreed.

“They’ve got to fix this stuff,” said committee member Sen. Luther Olsen, R-Ripon. “It’s just a dirty rotten shame that this stuff had to be defaced and damaged, but that’s the world we’re living in, so let’s get it fixed.”

The state’s fine arts insurance provider and the state Historical Society are working to select a company to restore the statues. Early indications are that the statues could be restored and re-installed outside the Capitol as early as next spring.

One of the committee members, Rep. Mark Born, R-Beaver Dam, expressed concern about re-installing the statues that soon given the possibility of future civil unrest.

“I’m not comfortable really replacing some of these things until we believe that either (the Department of Administration) or the proper authorities in the city have a plan to protect the property, because I would hate to see us recast statues and nine months later watch them get dragged down the road again,” Born said.

Johnson, president and CEO of the Boys & Girls Club of Dane County, wrote a letter to Risser and the board last month asking them to pass a resolution to erect a statue at the Capitol honoring Phillips.

In a letter to the committee Monday, Gov. Tony Evers expressed his support for the proposal.

“Vel Phillips was a true treasure and Wisconsin icon, and her service to our state is deserving of permanent recognition at the State Capitol,” Evers said.

But for now, that proposal won’t be moving forward because the committee will need to see a more detailed project proposal submitted. According to state law, no installation of fixtures in Capitol buildings or on the grounds is allowed until voted on by the bipartisan 16-member Executive Residence Board. Risser said the board doesn’t build statues; it only reviews and approves proposals.

An administrative rule also prohibits additional statues on Capitol Square, but Risser said that rule can be changed if people want to move forward with the idea. For now, that means a group needs to submit a more detailed project proposal of a Phillips statue, including how it would be paid for. During the meeting, Department of Administration Secretary Joel Brennan said the department was in early stages to begin working with the family of Phillips, as well as other supporters, to explore options for a statue.

Risser, who served with Phillips, said he’d like to see a commemoration of her, whether it’s a statue, plaque or something else.

“She really was a gate-opener here,” Risser said. “I think she certainly deserves recognition somehow.”

Referencing the current political climate and civil unrest happening throughout the state and the nation, Johnson in his letter encouraged the Executive Residence Board to consider the achievements of Black Wisconsinites as it begins to repair the fallen statues and work toward a “healing process.”

Johnson also noted that no artwork from African American artists is currently displayed in the Capitol, something the board’s new committee chairwoman, Rep. Amy Loudenbeck, R-Clinton, is hoping the state can verify. Johnson said he hoped a statue of Phillips could be constructed in addition to restoring and re-installing the two statues torn town.

“The young people of Wisconsin and generations thereafter need to see that representation matters,” Johnson said in the proposal. “They need to see heroes and leaders that reflect the ecosystem of our communities at large.”

Photos: Look back at Madison’s ‘Forward’ statue through the years

Temperatures will be on the rise heading into a hot weekend for the area, according to forecasters. 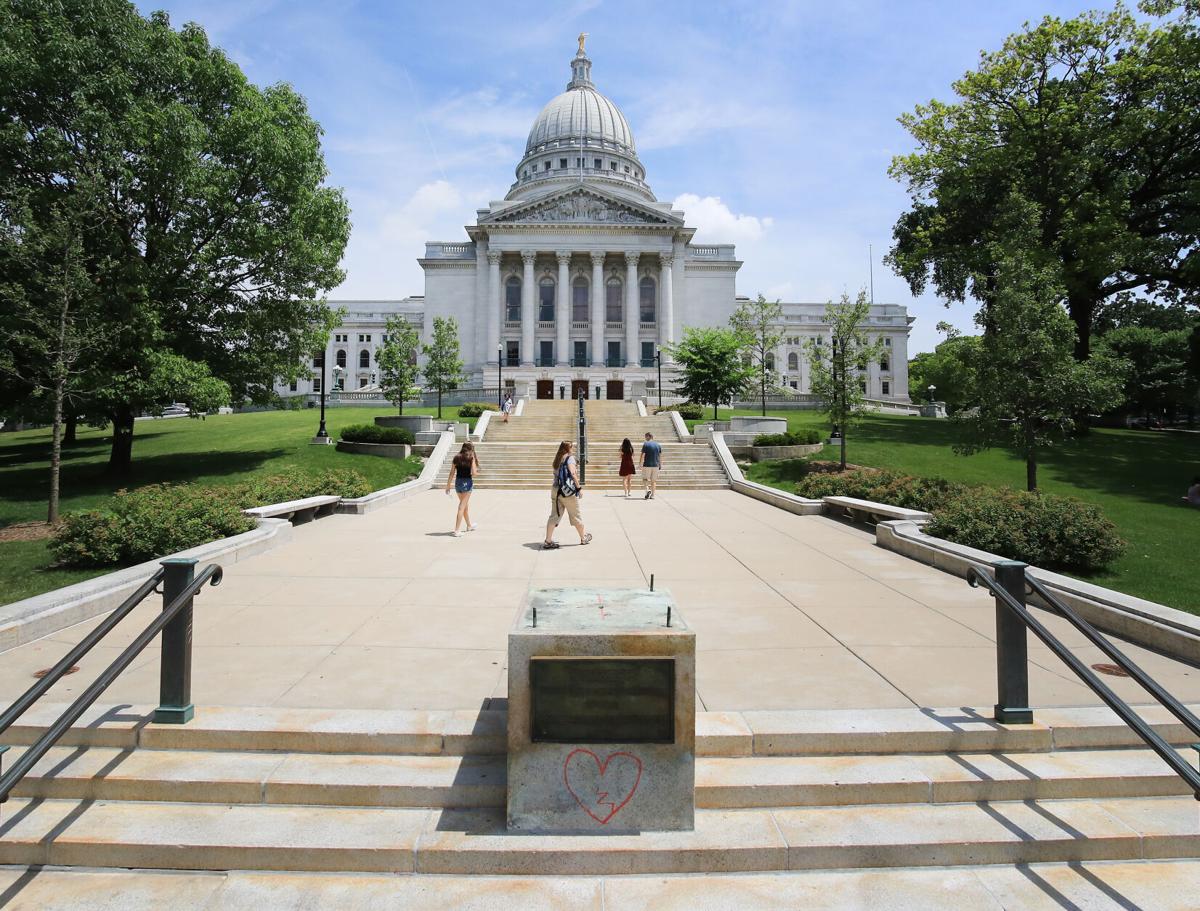 A bare pedestal is all that remains of Wisconsin's "Forward" statue after protesters tore it down June 23, along with a statue of Union Civil War Col. Hans Christian Heg, after the arrest of a local Black activist for causing a disturbance in a nearby restaurant. 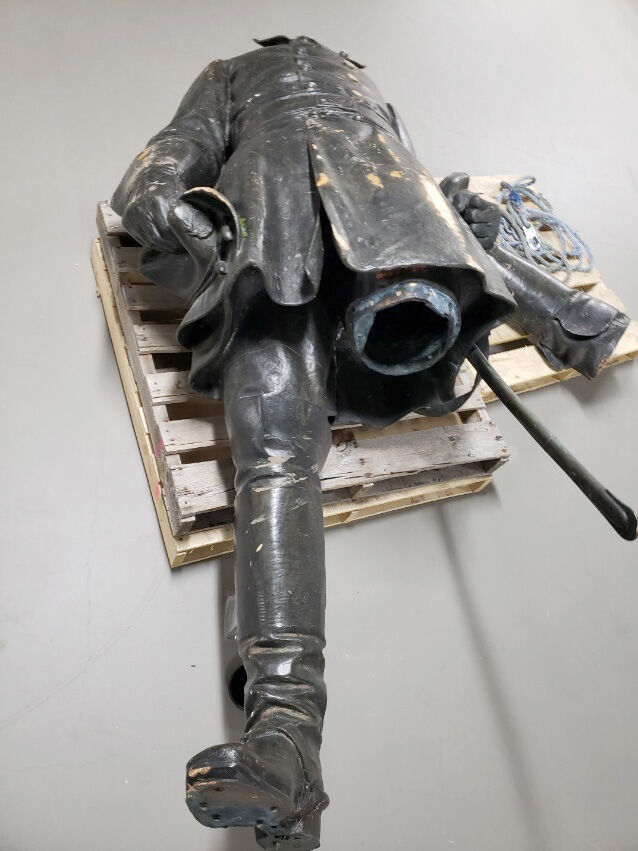 The recovered remains of the statue of Col. Hans Christian Heg, after it was torn down last month. 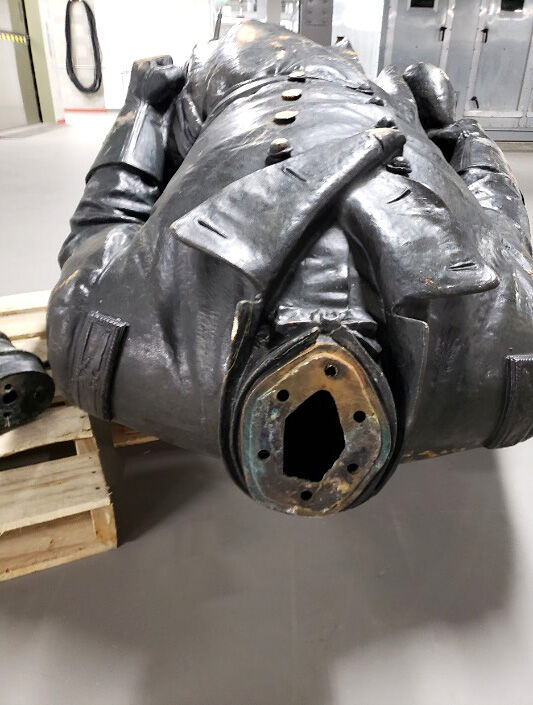 The head of the Col. Hans Christian Heg statue is still missing and will likely need to be recast from an existing statue in the Racine County town of Norway. 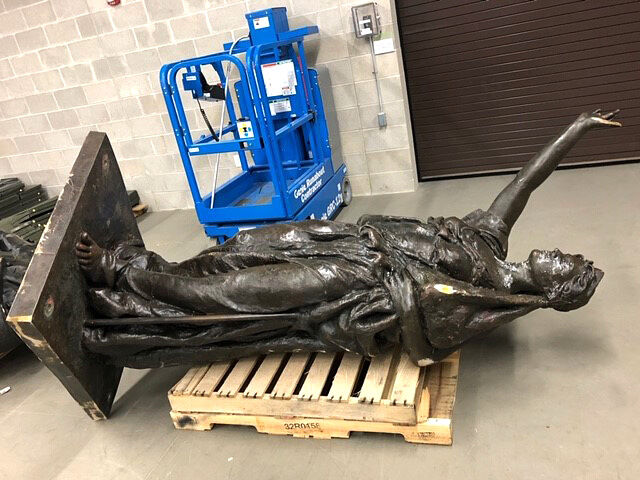 The "Forward" statue was recovered after being torn down by protesters. 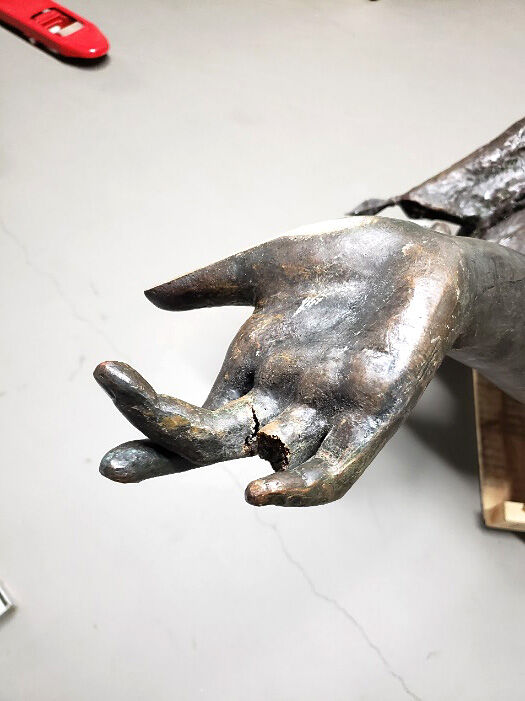 One of the fingers from the right hand of "Forward" still hasn't been recovered.