MUSCODA — The rectangular wooden block is a little bit bigger than a deck of cards.

The idea is to blow through the hole at one end to make a sound that is inaudible to the human ear but wakes a slumbering morel mushroom.

Use it in the right spot, and the tasty and much-sought-after fungus will begin emerging from the forest floor.

“We’ve sold quite a few of these over the years,” Ron Machotka said of his homemade magical contraption. “Of course it works. They just pop up something terrible. Just don’t blow it in your car because then they’ll start growing underneath your seat and you won’t find them right away.”

Of course, Machotka’s mushroom call is a gimmick and is ignored by the secretive spores, although he’s sold quite a few of the $3 calls over the past 10 years as a novelty item during the annual Muscoda Morel Mushroom Festival. But these are desperate times for Machotka and his buddies at the Leslie J. Lee American Legion Post 85.

The festival, which should have been wrapping up Sunday, has been canceled due to COVID-19. An usually dry and cool spring has kept much of this year’s morel crop in hiding. And that’s bad news for the Legion, which buys and sells mushrooms at this time of the year as part of its fundraising efforts that support the local baseball team and Badger Boys State and are used to buy the American flags that line the village’s main drag that stretches south from the Wisconsin River in this northeastern corner of Grant County.

When we arrived at the Legion’s stand, set up on a former used car lot late Thursday morning, the organization had taken in only 20 pounds of morels from local pickers for the entire season. Normally, by this time of the year the Legion would have taken in between 800 and 900 pounds of morels. Rain and moist conditions late last week will help the harvest, but this could go down as one of the worst years for morels in recent memory.

“I can’t say I’ve ever had a year like this in the 12 years I’ve been doing it,” said Tom Nondorf, who organizes the annual fundraiser. “I could easily move 1,100 pounds right now because the phone is ringing nonstop with people wanting to buy. But my customers that bring them in, the ones that bring in 20 to 30 pounds at a time, ain’t showing up.”

The calls come from Iowa, Indiana, Illinois and throughout Wisconsin.

But Nondorf’s biggest buy this season from one picker has been just over two pounds, and it hasn’t even paid to fire up the portable beer cooler trailer that is normally used for temporary storage. When Nondorf opened the stand on Thursday morning, three people were waiting to buy morels. He quickly sold out of the two pounds he had on hand from the previous day. The mushrooms that Machotka fried up in butter with eggs Thursday were from the previous season and had been frozen in sealed plastic bags for the past year.

Despite their age, the morels still had a fantastic smell and taste.

“I didn’t put any salt and pepper on these,” Machotka said as he handed over a paper plate with steaming eggs and morels. “You have to do that yourself.”

The spring fundraiser is a big deal for the Legion and is a $30,000 endeavor. The Legion buys mushrooms for $20 a pound and sells them for $35 a pound. In most years, that means buying and selling around 1,200 pounds of mushrooms, which nets about a $5,000 to $6,000 profit. Besides the wholesale operation, the Legion has also sold during the festival pudding cup-size servings of sauteed mushrooms for $8 a cup. The delicacy draws hundreds of morel-hankering eaters and adds to the Legion’s bottom line as the crew fries up 300 to 400 pounds.

“They’ll be lined up down the street,” Nondorf said. “It’s unbelievable. But it’s a full cup.”

Morel mushrooms are one of Wisconsin’s quintessential foods. But unlike the proliferation of cranberries, bratwurst, cheese curds and deep-fried bluegill that are all easily attainable, morels are available only for a few weeks of the year. It’s kind of like rhubarb, only no one has figured out yet how to grow a morel in their backyard year after year. And nobody is buying rhubarb at a farmers market for $40 to $60 a pound.

That’s why people flock to east-facing hillsides at this time of the year and keep their heads down hoping for a big score.

Morchella esculenta has been found in all 50 states, but the Midwest is a prime location for the spongelike mushroom. Many people hunt on their own land, but the mushrooms can also be found on public lands such as state parks, where it’s legal to also harvest edible fruits and nuts, wild asparagus and watercress for personal consumption, according to the state Department of Natural Resources.

Only the mad disclose their favorite spots. That’s why the posts on the Wisconsin Morel Mushroom Hunters Facebook page are purposefully vague. Michele Brown Schultz posted last week eight photos of morels she found in Crawford County after four hours of searching.

“Well, not getting skunked but still slim pickins,” she wrote.

Other posts came in from Dane, Polk, Shawano, Outagamie and Waukesha counties.

For the Muscoda Legion, the morel fundraiser is actually a multi-month process that is sourced with beef.

On the last Wednesday of each month from May through October, the Legion sets up a hamburger stand in a downtown park that at one time was home to a train depot. The sales are impressive for a community of just 1,300 people. Over the course of the six months in 2019, the Legion sold nearly 5,000 hamburgers. The beef is purchased in bulk locally from Bender’s Foods and the meat formed into patties by the hands of the Legion Auxiliary in the morning and grilled at three stations in the park later that day by a team of volunteers from the Legion. More than 500 hamburgers were sold at each event last year, including a season high 654 on Oct. 23 despite rain and a temperature of 46 degrees, according to the data written on a dry erase board on the inside door of the hamburger trailer.

But for Nondorf, who spent 25 years in the U.S. Army Reserves and helped build housing in Iraq, the stand may stay up for another week. He normally takes a week of vacation each year from his job at Cardinal Glass in Spring Green to run the morel stand, but may extend the stand’s hours into this week if he can find help. Morels don’t follow a calendar. Instead, it’s all about the weather.

“It’s a seasonal thing and has the taste that people have gotta have,” Nondorf said. “It’s just a bad year all around.”

The lawsuit comes after Public Health Madison and Dane County announced the county's reopening plan, which replaces the statewide plan struck down by the Wisconsin Supreme Court. 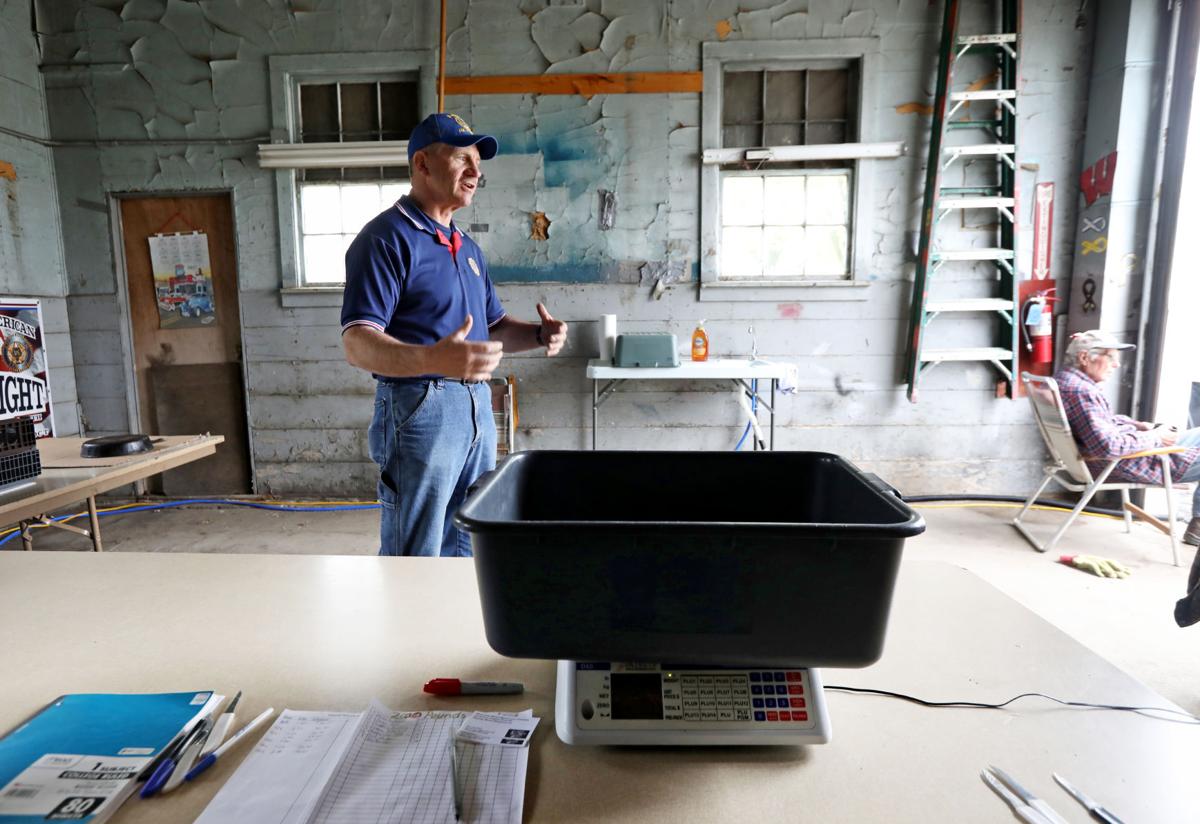 Tom Nondorf has been buying and selling morel mushrooms for the past 12 years as part of a fundraiser for the local American Legion post in Muscoda. But this season the morels have been sparse and this scale and bin seldom used. 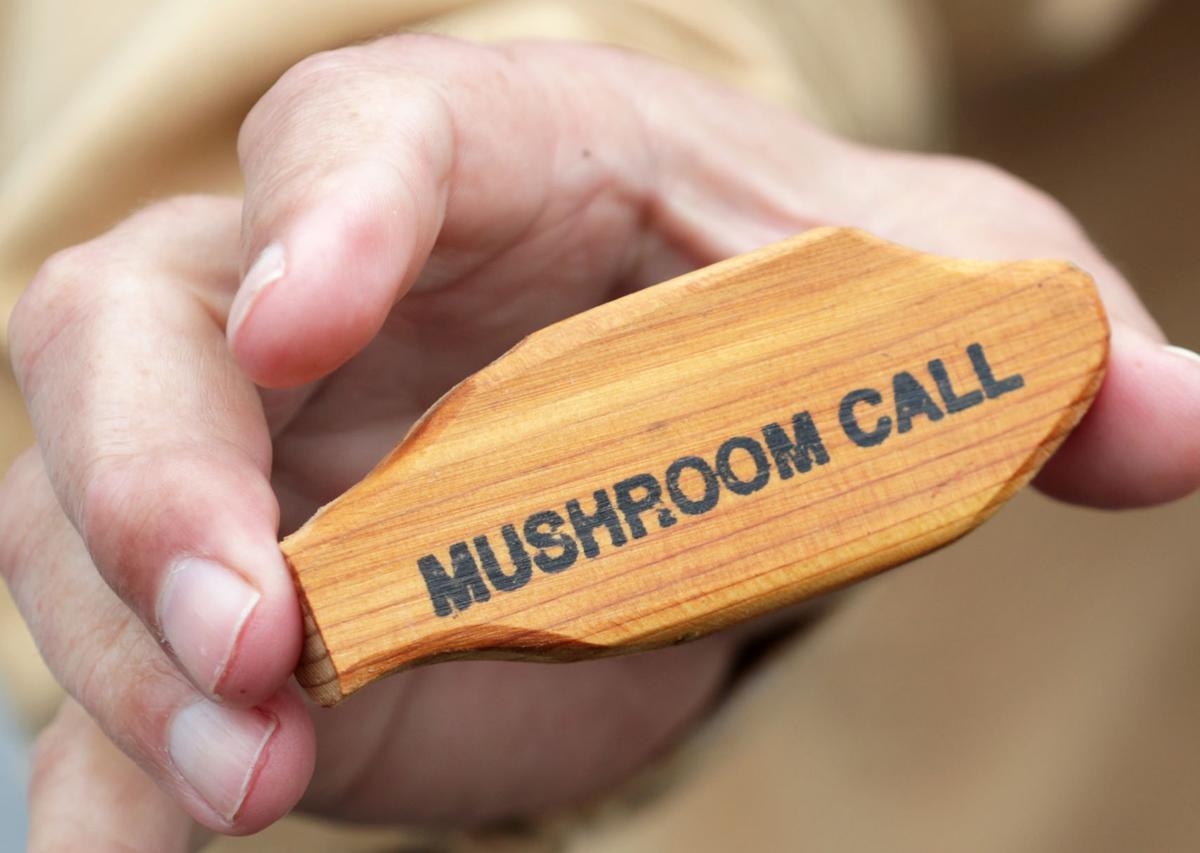 Ron Machotka, of Muscoda, has been making wooden morel mushroom calls for 10 years. He sells them for $3 as a novelty. But the morel season has been so poor, there has been talk of actually using the gimmick. 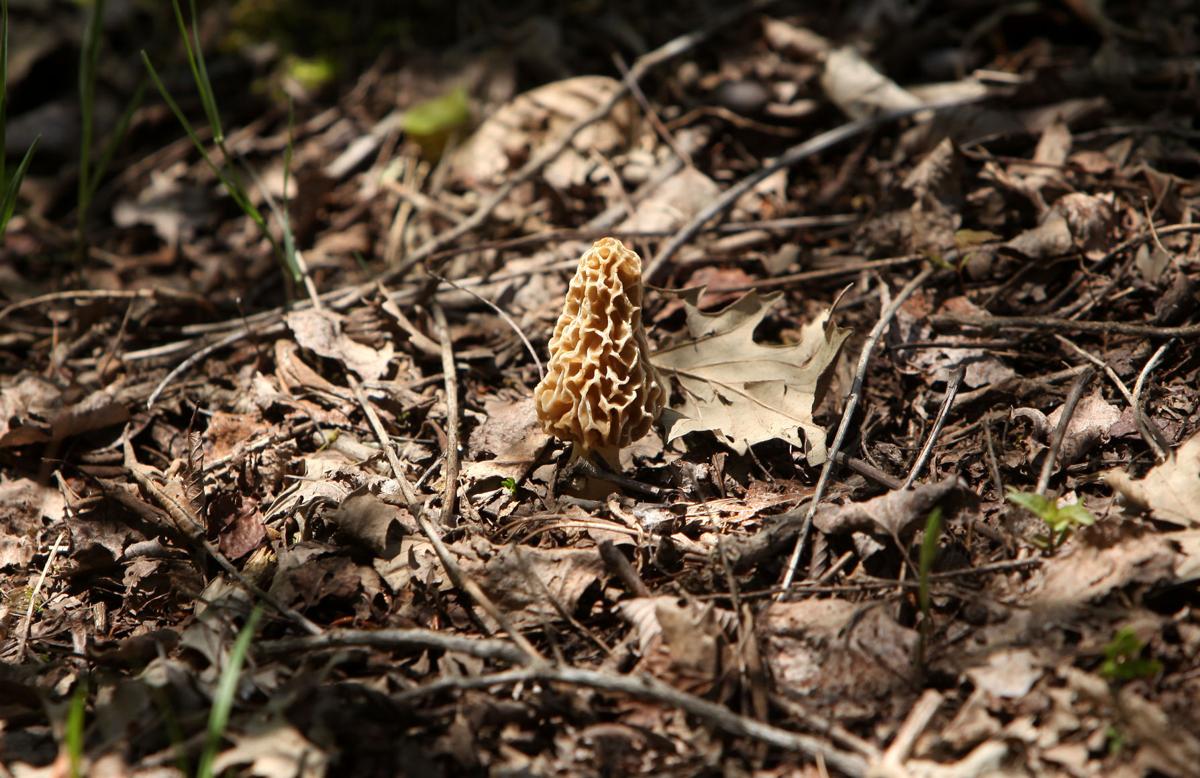 A morel mushroom stands at attention waiting to be harvested near Ithaca. 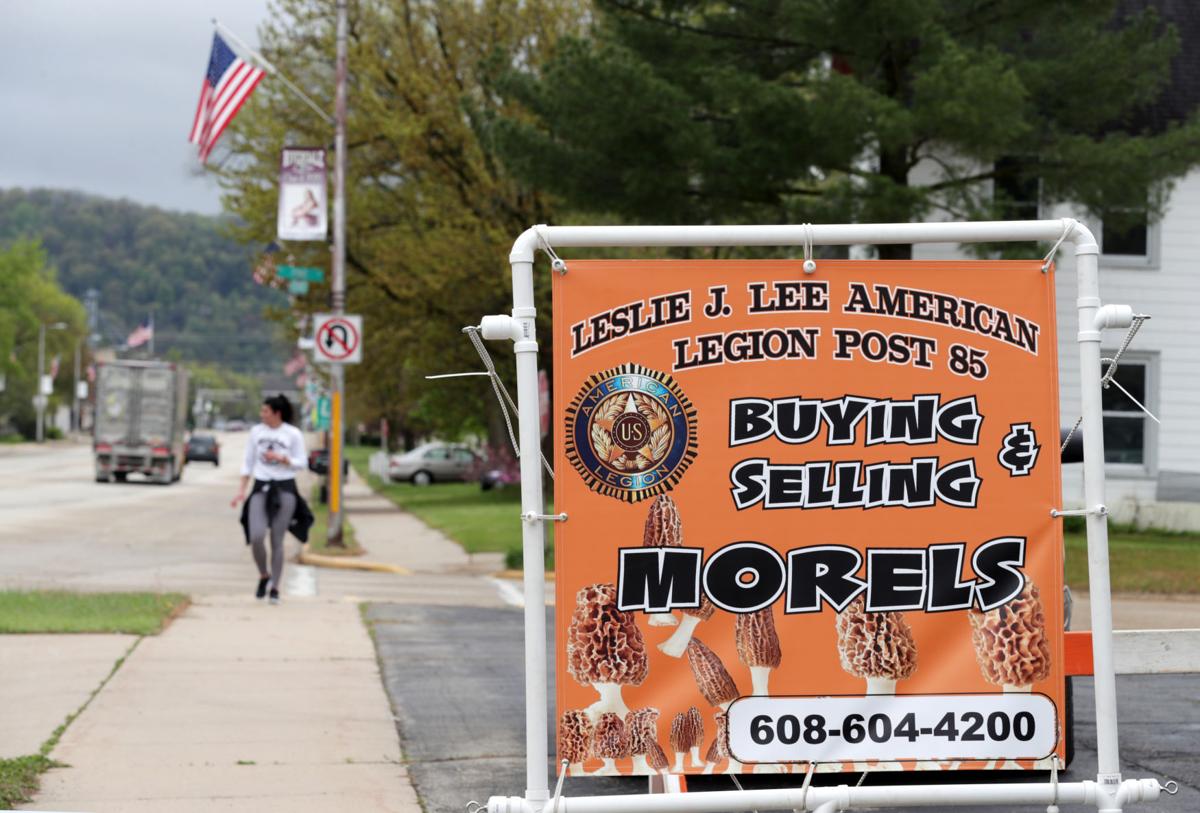 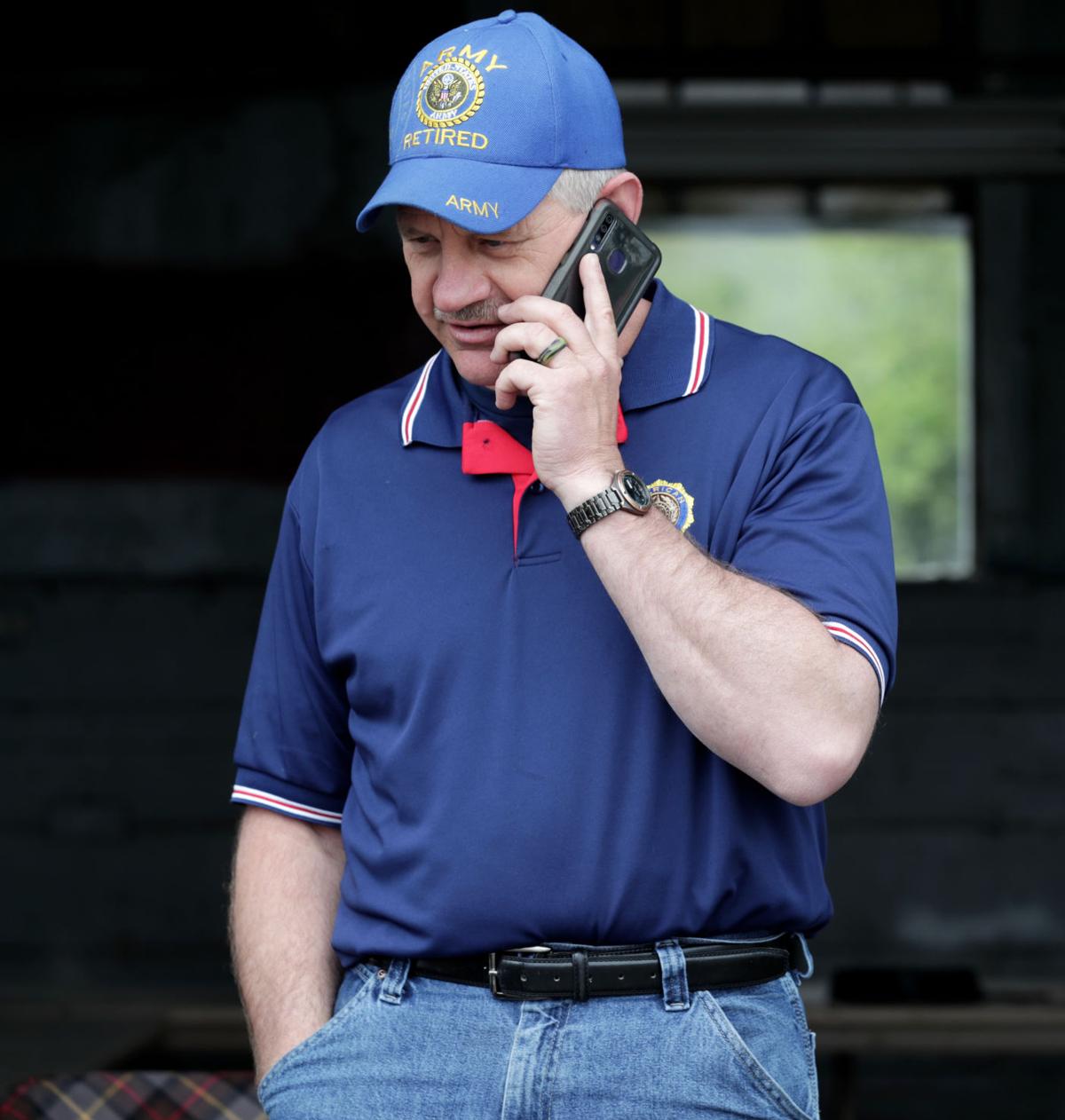 Tom Nondorf takes a call from a customer in the Quad-Cities who wants to buy morel mushrooms. Nondorf has customers in Indiana, Illinois, Iowa and throughout Wisconsin. 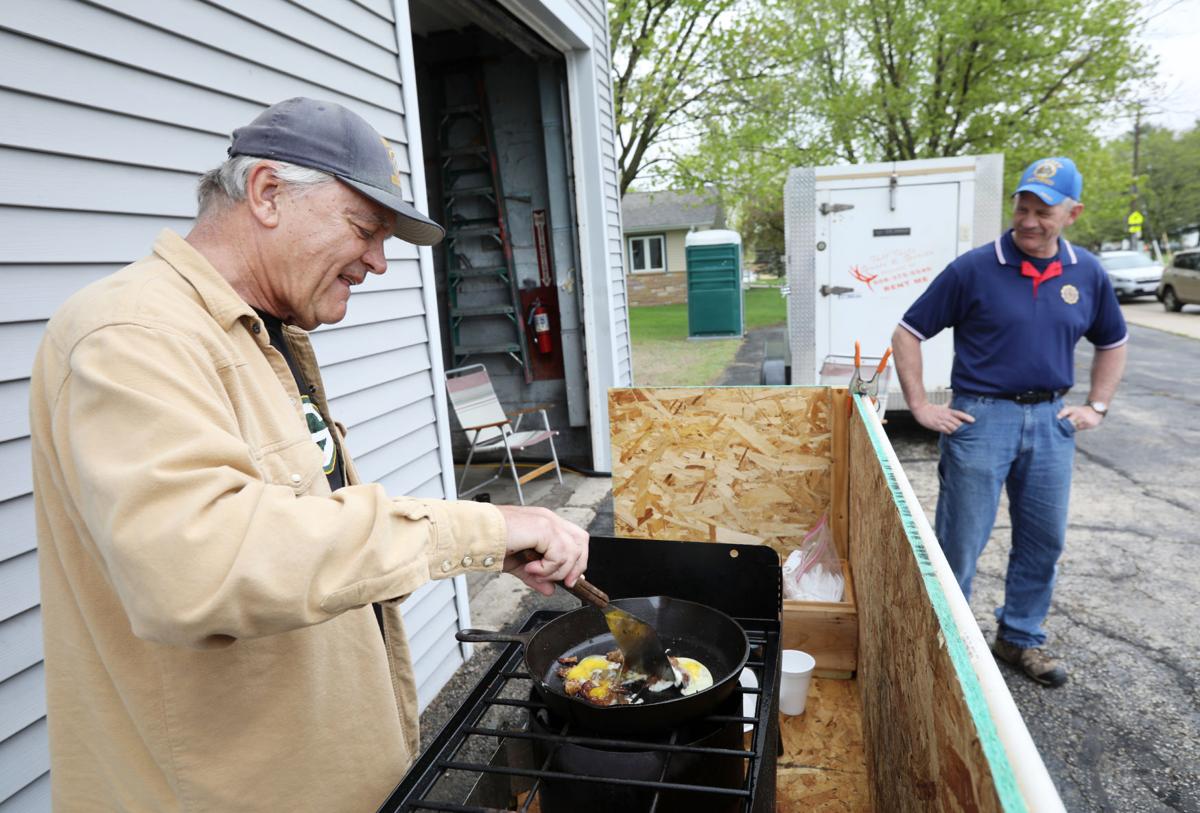 Ron Machotka, left, fries up a batch of morel mushrooms in pan of butter. The stand, operated by the local American Legion post in Musocda and located on a former used car lot, is where the Legion buys and sells morel mushrooms as part of a fundraiser. 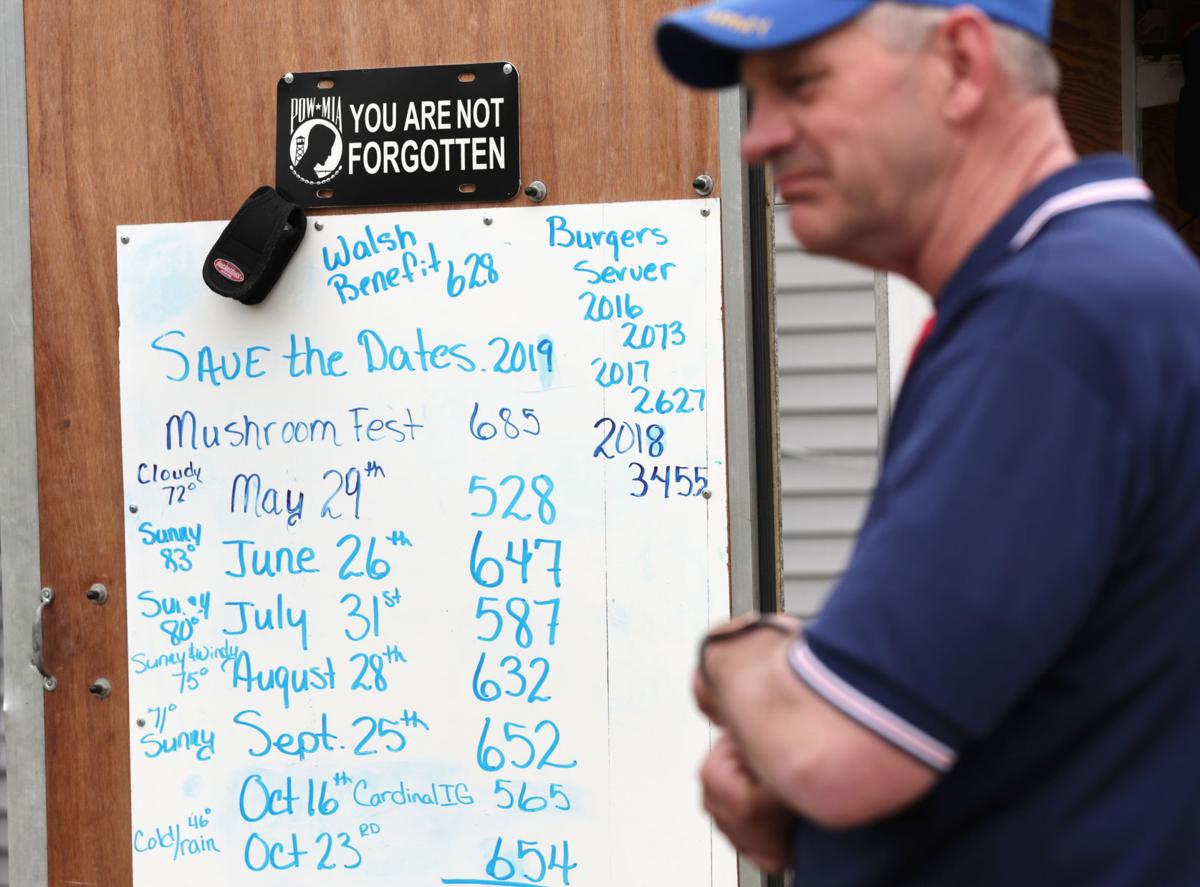 To raise the $30,000 needed to buy more than 1,200 pounds of morel mushrooms each spring, Tom Nondorf and the local American Legion post in Muscoda sell hamburgers on the last Wednesday of each month from May through October. In 2019, the Legion sold nearly 5,000 hamburgers, according to the statistics kept on the door of the Legion's mobile hamburger trailer. 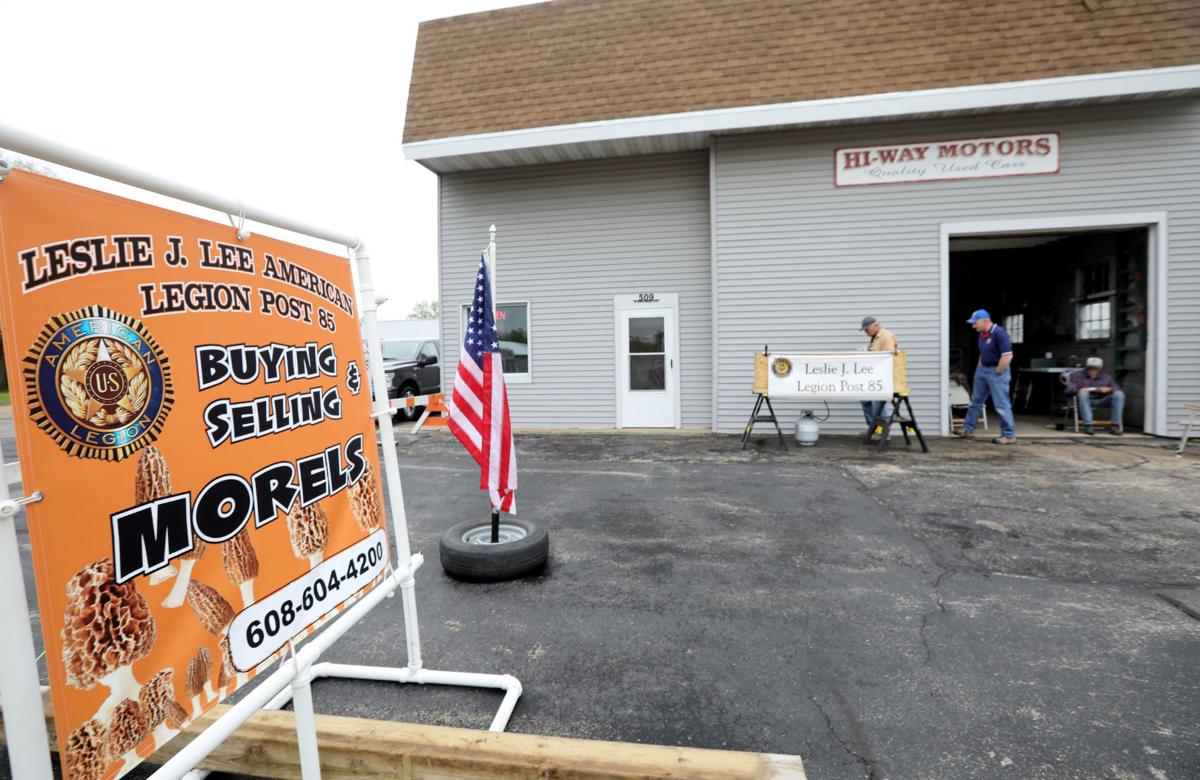 Members of the Leslie J. Lee American Legion Post 85 buy and sell morel mushrooms each spring, usually at the community center in Muscoda. But because the center is closed due to COVID-19, the mushroom stand is now set up on a former used car lot. 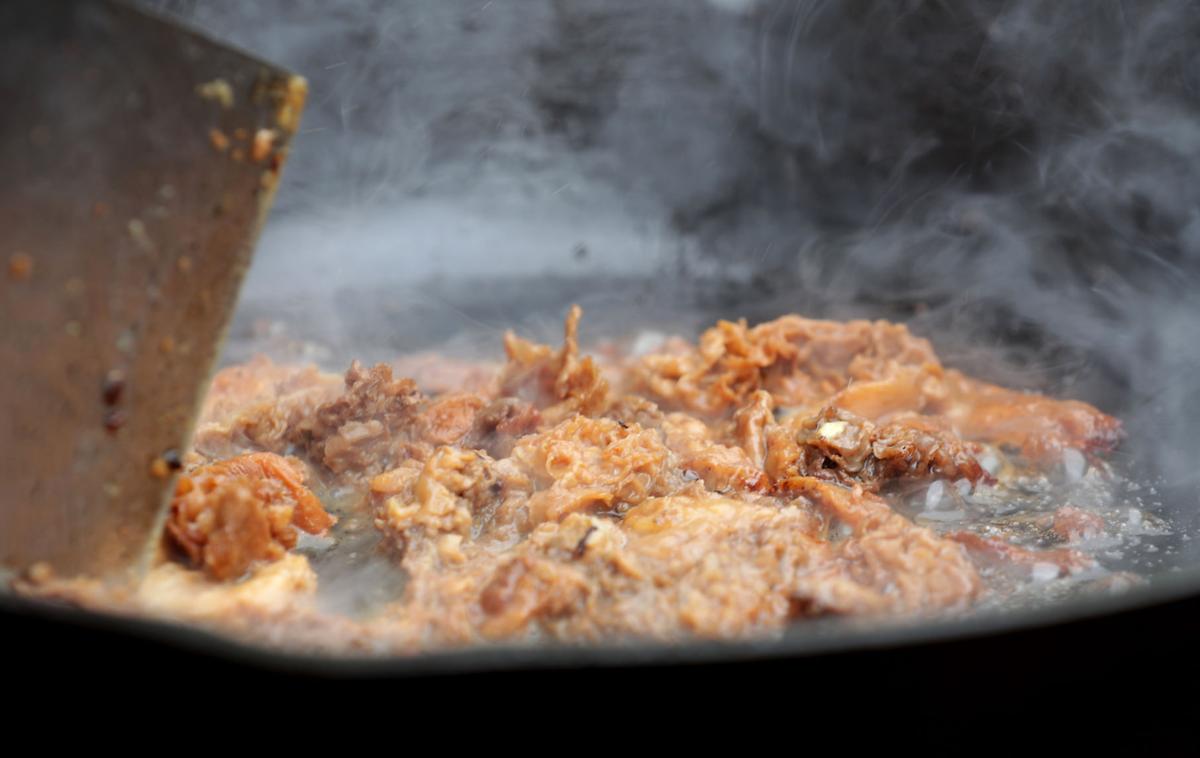 Ron Machotka cooks up morel mushrooms, frozen from last year, as he waits for customers outside a former used car lot in Muscoda.