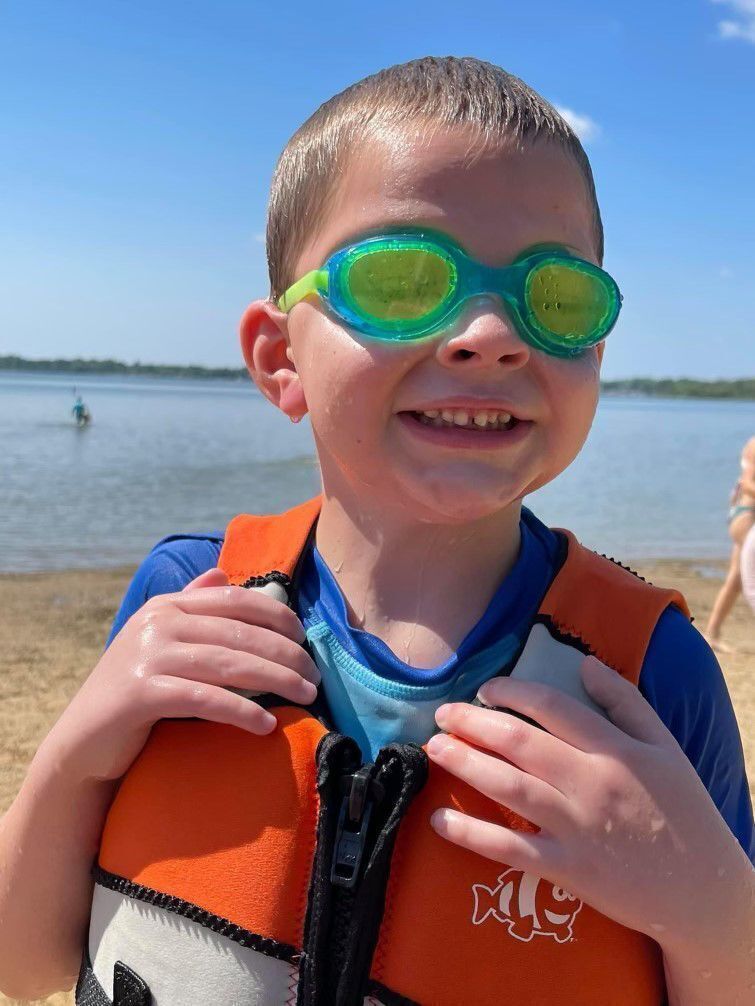 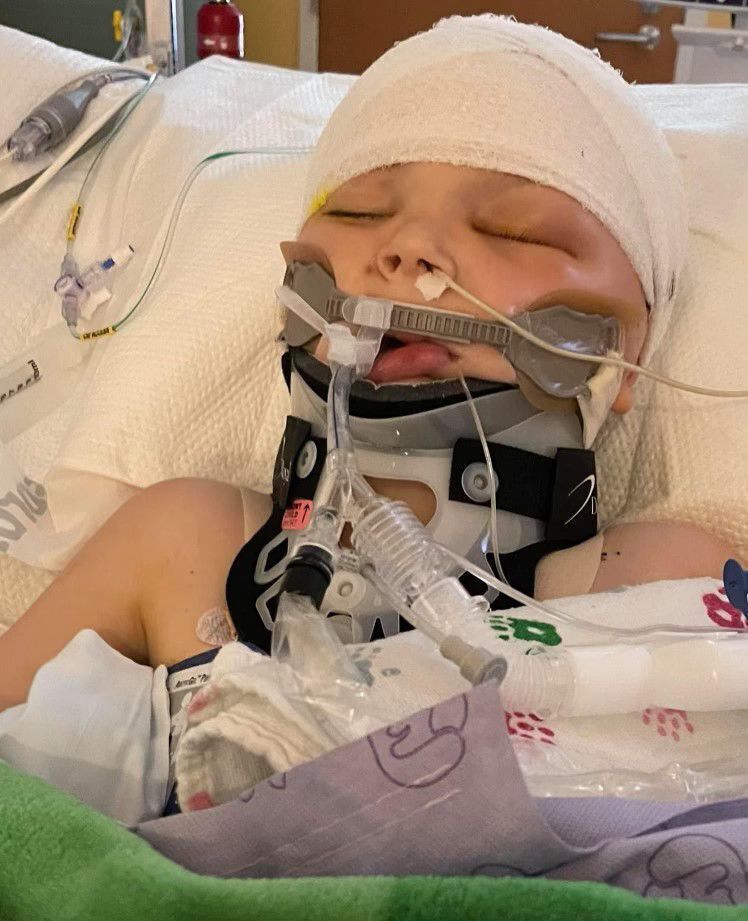 Alex Hook at Children's Wisconsin Hospital in Wauwatosa on Saturday. 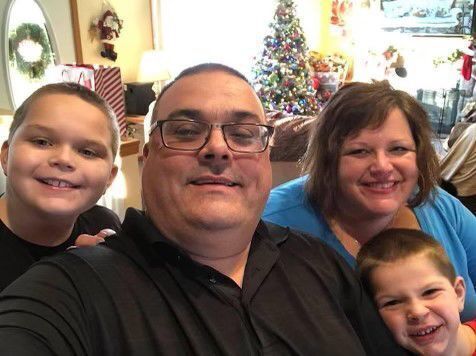 The Hook family, from left, Nathan, Kirbey, Caryn and Alex.

KENOSHA COUNTY — A 6-year-old Riverview Elementary School student remains in critical but stable condition Sunday night after suffering a traumatic brain injury when a projectile flew onto school grounds from under the deck of a lawnmower and struck him in the head.

Take advantage of this limited-time offer

Stay connected with local news, sports and politics. Unlock six months of unlimited access for only $1.

Alex Hook, a first-grader at the school at 300 E. Prosser St., Silver Lake, had been at recess on Friday with classmates, according to his aunt, Michelle Delaquila Koertgen. A landscaper had apparently mowed over a piece of rebar, which struck the boy directly in the back of his head, according to a GoFundMe narrative posted over the weekend by Delaquila Koertgen.

According to the Kenosha County Sheriff’s Department, the lawnmower was reportedly mowing the grassy median in the center of the street near the school just before noon when the incident occurred.

Alex was flown to Children’s Wisconsin Hospital in Wauwatosa where he underwent emergency brain surgery that same day. He suffered a fractured skull and bleeding in brain. A piece of bone was removed from his brain, according to the GoFundMe page post.

“He’s still in critical but stable condition. He had additional swelling at the left side of his face today,” said Koertgen, who spoke to a reporter on Sunday night. Alex is currently in a medically induced coma, she said.

On Monday, her nephew was expected to undergo an MRI to determine if there’s additional swelling in the brain, she said.

“And, at that time, they’ll make a determination if they’re going to do something from a medicine perspective or something more aggressive,” she said. “If (doctors) are comfortable with the level he’s at they’re going to, after the 72-hour mark, then contemplate taking him out of the medically induced state that he’s in.”

They will then determine the prognosis “for what is the best short-term, long-term (treatment),” she said.

Caryn Hook, his mother, has kept round-the-clock watch of Alex at the hospital.

“My sister has not left his side since the moment it happened,” she said.

Meanwhile, father Kirbey Hook is caring for their 10-year-old son Nathan, who has special needs. She said Nathan knows that his brother was injured, but not the severity.

Despite their age difference, she said the brothers are close.

“They do everything together. They love each other. They both are just the happiest, most affectionate, wonderful boys you could ever meet,” she said.

According to Koertgen, Kirbey, a U.S. Navy veteran, currently works full time servicing machinery at a foundry, but his insurance coverage is not sufficient to pay all of Alex’s medical costs. Caryn is an independent contractor for an Illinois pharmaceutical company and is paid by the job, she said.

“We’re very well aware medical costs are going to be astronomical,” Koertgen said. The costs of the Flight For Life, the critical care transport service, which flew Alex to the hospital, she said, is an estimated $50,000 to $75,000 alone.

Koertgen said she started the fundraising page so the family would not have to worry about financing Alex’s treatment and care. The campaign has raised close to $50,000 of a $150,000 goal as of late Sunday.

“They need to focus 100 percent on the recovery of Alex and the well-being of Nathan,” she said. “That should be all they have to (focus) on.”

Koertgen said she believes that Alex’s injury could’ve been prevented.

“Somebody cutting the grass on the median, next to a group of children … this is totally avoidable,” she said.

She said she wants to see state legislation drafted and approved that would limit the timeframe and distance that maintenance, from lawn mowing to snow plowing, can be performed near schools while children are present outdoors. More than 9,000 lawnmower-related injuries are reported in children each year.

In the meantime, she said she and the Hooks are grateful for the outpouring of financial and moral support.

“It’s truly amazing how wonderful the community has been,” she said. “I want to specifically thank the school, the first responders, and the hospitals because we have been overwhelmed by their generosity and their kindness and their care.”

'There's a lot of pride in this town': Fort Atkinson student death spurs reckoning over masks

The mask mandate began Friday after the death of a student and a request by the Jefferson County Health Department.

Police have released little information, but say they are taking the incident "very seriously" and are "committed to upholding the public's trust."

U.S. Reps. Gwen Moore and Ilhan Omar are calling on the secretary of defense to investigate "possible mistreatment and/or neglect" faced by Afghan refugees in Wisconsin.

The model, in which patients pay monthly fees outside of insurance, is growing even in the HMO-dominated Madison market.

An Arizona man who allegedly told his father he “snapped and shot a couple of people" was charged Tuesday with murder, about a week after four bodies were found in an abandoned SUV in western Wisconsin, according to a criminal complaint.

Watch now: A look inside donation facility for Afghan refugees at Fort McCoy

Fort McCoy is seeking winter clothes for the Afghan refugees staying at the base. Here's how to donate.

Public Service Commissioner Tyler Huebner has recused himself from proceedings related to the Koshkonong Solar Energy Center, a 465-megawatt solar and battery storage facility near Cambridge.

The Wisconsin Supreme Court will review an appellate court decision that opened the door for Chrystul Kizer to use an affirmative defense while fighting a murder charge for the death of a man who prosecutors admit had been preying on Kizer and other underage girls.

Alex Hook at Children's Wisconsin Hospital in Wauwatosa on Saturday.

The Hook family, from left, Nathan, Kirbey, Caryn and Alex.