A handful of Democrats, including two official presidential electors, have filed a lawsuit against the 10 Republicans who signed paperwork attempting to hand Wisconsin’s Electoral College votes to President Donald Trump, alleging that, by doing so, the individuals played a role in the Jan. 6, 2021, insurrection.

The lawsuit was filed Tuesday by attorneys with liberal law firm Law Forward in Dane County Circuit Court and alleges that the 10 Republicans and the two attorneys who advised them broke several criminal and civil laws when they met at the state Capitol on Dec. 14, 2020, to sign official-looking documents asserting that Trump won the state.

“Defendants’ actions helped lay the foundation for a nationwide scheme to override the results of the 2020 election, thereby setting an anti-democratic precedent that jeopardizes all future elections inside and outside the State,” the lawsuit says.

The lawsuit seeks more than $2.4 million in damages, including $2,000 fines for the Republicans and their attorneys, and up to $200,000 in punitive damages for each plaintiff. Plaintiffs in the case include lawfully elected Wisconsin electors Khary Penebaker and Mary Arnold, as well as Bonnie Joseph, who is listed in court documents as someone who “objects to Defendants’ unlawful interference in Wisconsin’s participation in the Electoral College.”

“Wisconsin law recognizes the propriety of punitive damages where both the plaintiff and society have significant interests in deterring the defendant’s conduct, regardless of the lack of measurable harm that results,” the plaintiffs’ attorney Jeffrey Mandell wrote.

The lawsuit follows a March decision by the bipartisan Wisconsin Elections Commission to unanimously deny a complaint filed by Mandell that sought sanctions against the 10 Republicans, including Republican commissioner Robert Spindell, who signed the official-looking documents. The lawsuit also lists Boston-area lawyer Kenneth Chesebro and Jim Troupis, a former Republican-appointed Dane County judge who has represented Trump in Wisconsin.

Republican Party of Wisconsin chair Paul Farrow called the matter a “frivolous lawsuit from a liberal group” and “yet another Democrat attempt to resurrect a baseless story from two years ago.”

“Even the Wisconsin Elections Commission voted unanimously to not sanction anyone,” Farrow said in a statement. “Democrats have tried to use this event to distract from their abysmal record on election reform. It didn’t work then and it won’t work now.” 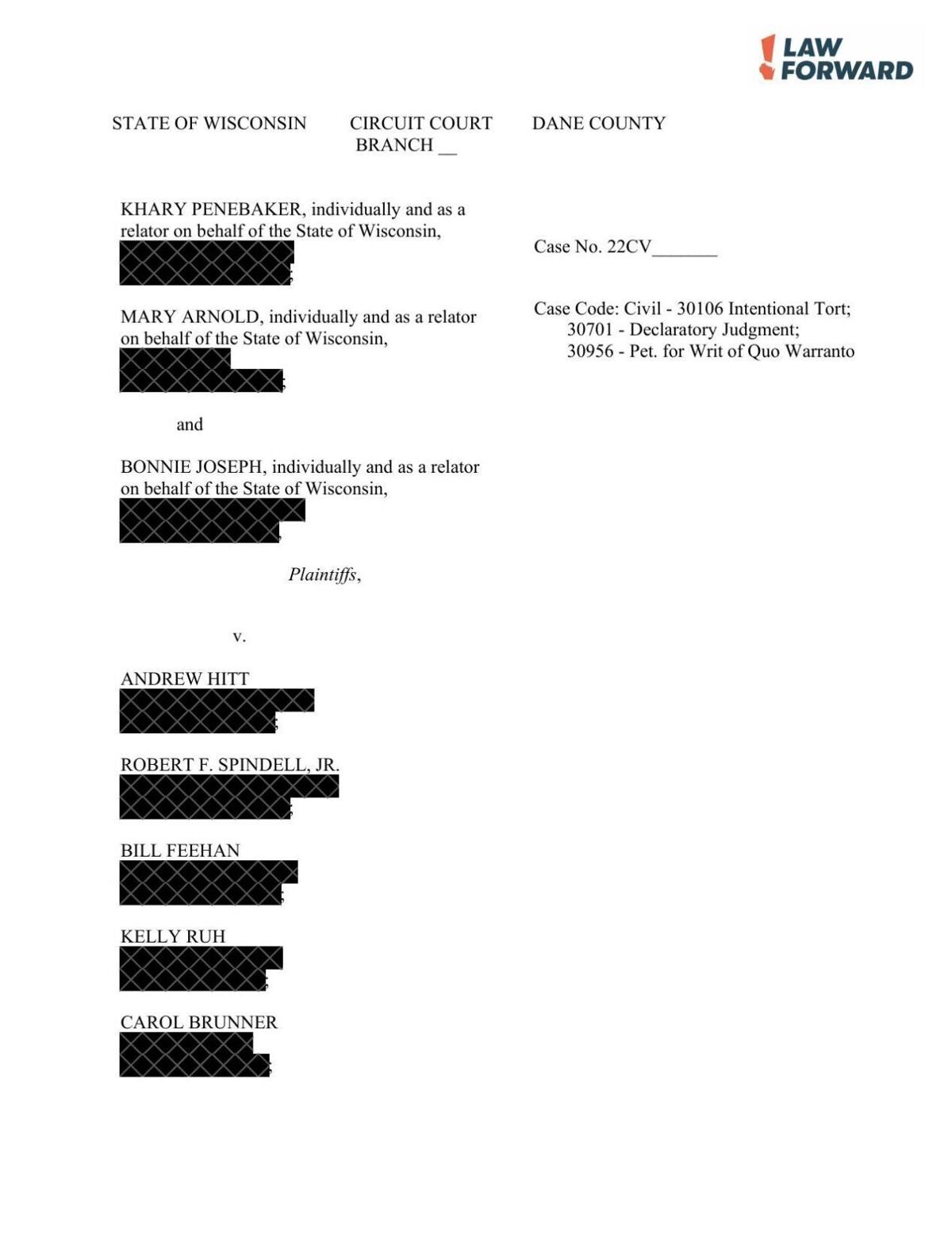 The lawsuit alleges the Republicans and their attorneys broke multiple laws, including counterfeiting public records, illegally interfering with official procedures, defrauding the public and engaging in conspiracy.

The meeting of Republicans occurred following advice from attorneys with close ties to Trump. Documents have underscored efforts by those in Trump’s inner circle to circumvent the Electoral College process in several states, including Wisconsin, following the 2020 election, despite recounts and court decisions affirming that Democrat Joe Biden defeated Trump in the battleground state by almost 21,000 votes.

The Republicans have said the meeting was to preserve their legal options amid litigation surrounding the election. Chesebro sent a memo to Troupis on Nov. 18, 2020, detailing the Republicans’ eventual plan to pose as electors.

The meeting took place on the same day that the Democratic slate of Wisconsin electors convened in the Capitol building to deliver the state’s 10 electoral votes to President-elect Biden. It also occurred after the Wisconsin Supreme Court ruled that Biden had won the election and a month after Wisconsin county clerks canvassed the presidential election results.

“The actions of the fraudulent electors were thus a necessary predicate for the subsequent efforts by Trump and his supporters to intervene at the Capitol,” Mandell wrote in the lawsuit.

2020 casts a long shadow over 2022 GOP primary, but could that hurt nominee in the fall?

Law Forward also filed a complaint with the Milwaukee County District Attorney’s Office and another with the Office of Lawyer Regulation — the agency that handles complaints against lawyers in Wisconsin — against former state GOP chair Andrew Hitt, who also signed the paperwork. The U.S. Department of Justice is also looking into the matter.

Hitt and fellow signer and 8th Congressional District GOP chair Kelly Ruh were subpoenaed earlier this year by the U.S. House committee investigating the insurrection attempt at the U.S. Capitol. The committee subpoenaed individuals in six other states where similar documents were signed.

The committee is examining whether Republicans were trying to present Pence with conflicting slates of electors so that he could have thrown the election to a House vote that would have handed the election to Trump, something Pence refused to do.

After more than 250 years, last remnant of one of Wisconsin's largest white oaks is no more

A 14-year-old boy accused of killing and raping a 10-year-old girl in Chippewa County woods will find out in September whether he will stand trial.

A man serving two life terms for killing a Wisconsin couple in a slaying that went unsolved for decades has died in prison, state corrections officials confirmed.

According to Planned Parenthood of Wisconsin, the birth control "Plan B" pill is legal and remains available in Wisconsin. The so-called "abortion pill" is now illegal, following Friday's landmark SCOTUS ruling.

"They just came in and bombed our school," said one mother. "It's like a brand-new school."

Struck deer leads to fatal crash on I-94, authorities say

After hitting a deer, an SUV reversed from the right shoulder of Interstate 94 into the left lane, leading to a crash with a tractor-trailer that killed one.

A chaotic Kenosha County Board of Supervisors meeting adjourned after a Kenosha man was arrested during public comments Tuesday night.

The ruling could activate Wisconsin's near-complete abortion ban, first passed in 1849, although Planned Parenthood of Wisconsin's legal advocacy director said she doesn't think the statute would spring back to life if Roe is overturned.