MUSCODA — Tom Nondorf wants to forget about this past spring.

The annual Morel Mushroom Festival here was canceled in May due to the COVID-19 coronavirus. And the weather was so cold and dry there were few mushrooms for him to buy from local pickers and sell to fungus lovers throughout the Midwest.

Thankfully, Nondorf and the rest of his cohorts with the Leslie J. Lee American Legion Post 85 have steamed hamburgers and a hungry crowd.

On Wednesday, the Legion kicked off its ninth year of Burger Night, selling its one-third-pound hamburgers fried on propane-fueled griddles, sprinkled with squirts of water from recycled plastic pepper containers and kept moist up to eight at a time while they cook under rectangular aluminum covers. Proceeds from the monthly event under the gazebo of Railroad Park bolster fundraising efforts that support the purchase of flags and banners for the downtown, the Legion baseball program and sending high school students to Badger Boys and Girls State.

In four hours last week, the Legion sold 560 hamburgers and cheeseburgers at $5 a pop despite heavy rains early in the evening in this Wisconsin River village. The organization is using three griddles this summer instead of two to keep up with demand, reduce wait times and make sure people return month after month.

“They were just lined up. The wait was 45 minutes to an hour,” Nondorf said of the two-griddle operation. “We’ve got too good of a thing going and I can’t have that, so I got online and ordered a third griddle and our wait times went way down to 15 to 20 minutes.”

The hamburger sale is held the last Wednesday of May, June, July, August and September and Oct. 21, and this year has taken on more importance because only 117 pounds of mushrooms were bought and sold in the spring fundraiser compared with more than 1,200 pounds in a typical season. The hamburger sale, however, while not reliant on the whims of Mother Nature, dead elms and south- and west-facing hillsides, faces a few hurdles of its own, even with more cooking surfaces.

The May Burger Night was canceled due to COVID-19 and prices for some supplies have skyrocketed. Last year, Nondorf was able to get fresh ground beef from Bender’s Market in Muscoda for $2.49 per pound. This year, due to the impact of the coronavirus on the meat packing industry, the price has shot up to $4.49 per pound. That means an extra $560 in meat costs for each event, since the Legion buys about 280 pounds of beef for each outing. A 50-pound bag of onions is now $35 compared with $24 last year.

“So far beef and onions are the only ones that have taken a large jump in price,” Nondorf said. “Everything else has stayed relatively the same.”

That includes for each event 2½ gallons of pickles, 18 pounds of American cheese slices, 80 packages of buns, four large bottles of Heinz ketchup and two containers of French’s yellow mustard.

Volunteers with Muscoda Joint Fire & Rescue put up the tent next to the gazebo, village staff move in the picnic tables, and the Legion does the cooking. The patties are formed the morning of the cookout by the ladies of the Legion Auxiliary, who gather at Ruth Rut’s home a few blocks from the park. Rut is well schooled in food prep after running a lunch wagon at farm auctions for 11 years and insists that the hamburger be freshly ground the same day she and her volunteers make the patties with plastic Tupperware forms.

Cedar Schneider and daughter Haley, 10, stopped by the Legion stand to pick up an order of six hamburgers on Wednesday but waited until the rain passed in this community that straddles the Grant and Iowa county border.

“They’re moist and flavorful,” Schneider said of the steamed burgers. “We come down probably every other time they have it, maybe. It’s nice to get out and see everyone in the community.”

Hamburgers can be controversial in Wisconsin. A cottage industry has sprouted in recent years on social media of curated lists of what the authors claim to be “the best hamburgers” in the state. There are no shortages of entries, and the subjective nature of it all turns into ridiculousness at times due to the sheer number of bars, restaurants, stands and carts, and different ingredients and methods used for cooking.

In Madison, some of the more notable spots for a hamburger include the Nitty Gritty, Dotty Dumpling’s Dowry, Weary Traveler, Blue Moon, The Plaza, Village Bar and Old Fashioned. In Green Bay there’s Kroll’s West, in Sheboygan you’ve got Schulz’s Restaurant, and in Milwaukee custard stands like Kopp’s and Gilles that serve up solid burgers, not to mention a ton of corner bars. Watertown has Zwieg’s Grill, and down Highway 26 in Jefferson Wedl’s Hamburger Stand has been around since 1916. Over in Prairie du Chien, Pete’s Hamburgers was founded in 1909 and operates out of a stand in the downtown.

ButterBurgers were created in Sauk County and are now a phenomenon at more than 740 Culver’s restaurants in 25 states. And let’s not forget Seymour, west of Green Bay, where Charlie Nagreen in 1885 claimed to invent the hamburger by smashing a meatball between two pieces of bread. This year’s Burger Fest in the Outagamie County community is scheduled for Aug. 7-8 but will be downsized and not include a popular hot air balloon rally. But volunteers will still cook a 200-pound hamburger.

“It was not an easy decision,” said Donnie Planert, the Burger Fest chair. “What we’re going to be doing we can do in small groups. It’s all going to be modified.”

In Muscoda, where morels have top billing, Burger Night is a relatively new affair that began in 2012 at the boat landing on the Wisconsin River. The Legion and a local Boy Scout Troop had scheduled a ceremony to properly burn nearly 600 worn and damaged American flags, so a hamburger stand was erected and about 75 hamburgers sold. That success convinced the Legion to continue the sale but move it later that year for better visibility to the village’s downtown to a park between the Muscoda Mini Mart and Riverdale Ag Service. Using one griddle, they sold 125 to 200 hamburgers at each event before expanding to two griddles in 2013 when sales jumped to nearly 300 hamburgers per cookout. In 2016, the Legion sold 2,073 hamburgers for an average of 345 hamburgers per event. In 2019 the Legion tallied 4,950 hamburgers, which included sales at the morel festival.

“We do this once a month so it gets more efficient each time, but you work,” Steve Kraak, 74, a U.S. Army veteran who lives in Sun Prairie, retired from the UW-Madison Agronomy Department and returns to his hometown once a month to operate a grill. “They’re just good burgers because the way they’re being cooked is a little bit different than normal. The meat does not dry out. You get a good, juicy burger.”

The cookout draws customers from throughout southwestern Wisconsin who arrive in cars, pickup trucks and even on ATVs. Wendy Roh only has to walk across the street from the bar she has owned the past three years. She collects money from her customers at the Copper Lounge and makes multiple trips a night to the hamburger stand, buying six or seven at a time but sometimes as many as 20 in one shot depending on the crowd.

“They don’t want to stand in line but they enjoy them,” Roh said of her patrons. “There’s a lot of community support here. (The Legion) supported me during the shutdown. They bought gift certificates (and gave them to) people who were buying and selling mushrooms.”

Once a month from May through October, American Legion Post 85 in Muscoda cooks up hamburgers in Railroad Park in the village's downtown. Stea…

Tucker: What holiday should be canceled next? 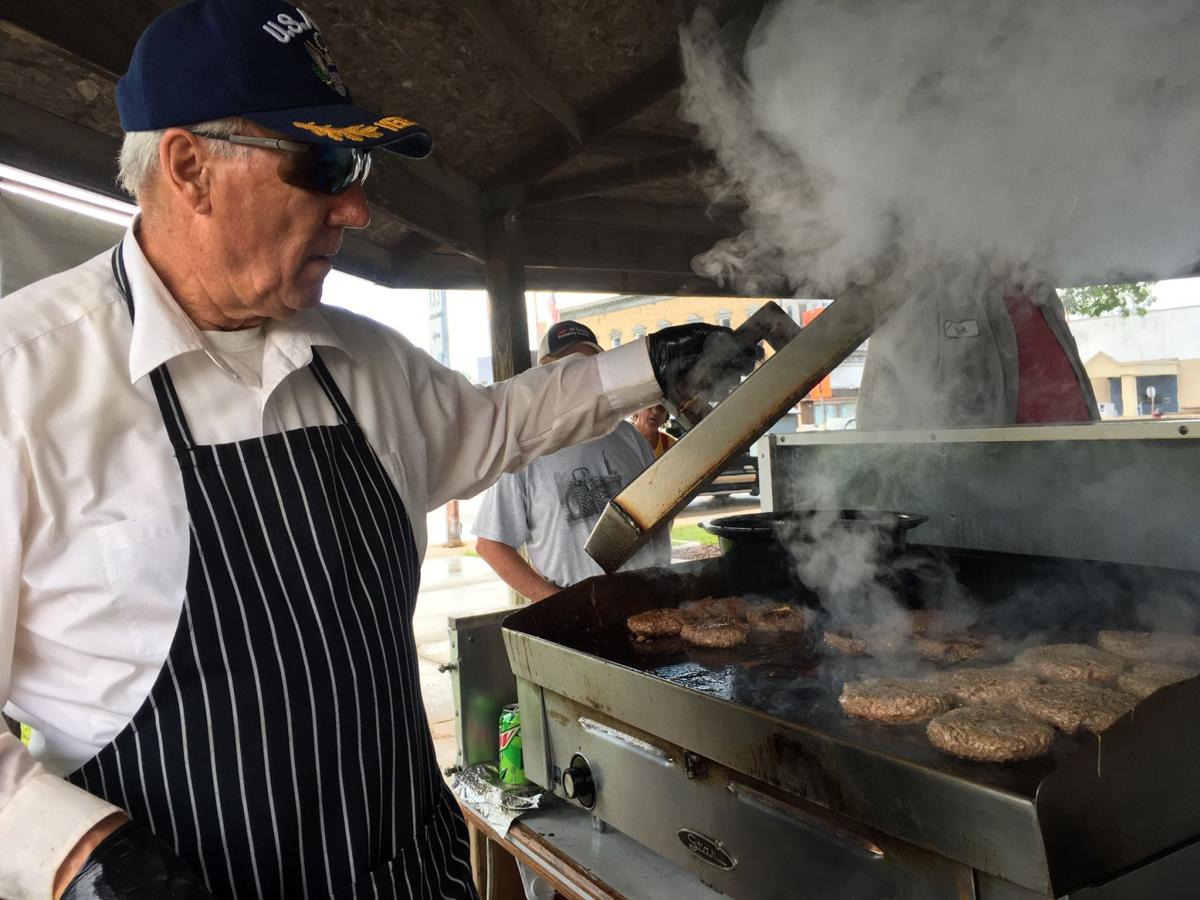 Steam is the key for a moist hamburger at the American Legion's Burger Night at Railroad Park in Muscoda. Steve Kraak, who lives in Sun Prairie but grew up in Muscoda, manned one of three griddles at Wednesday's fundraiser where 560 hamburgers were sold. 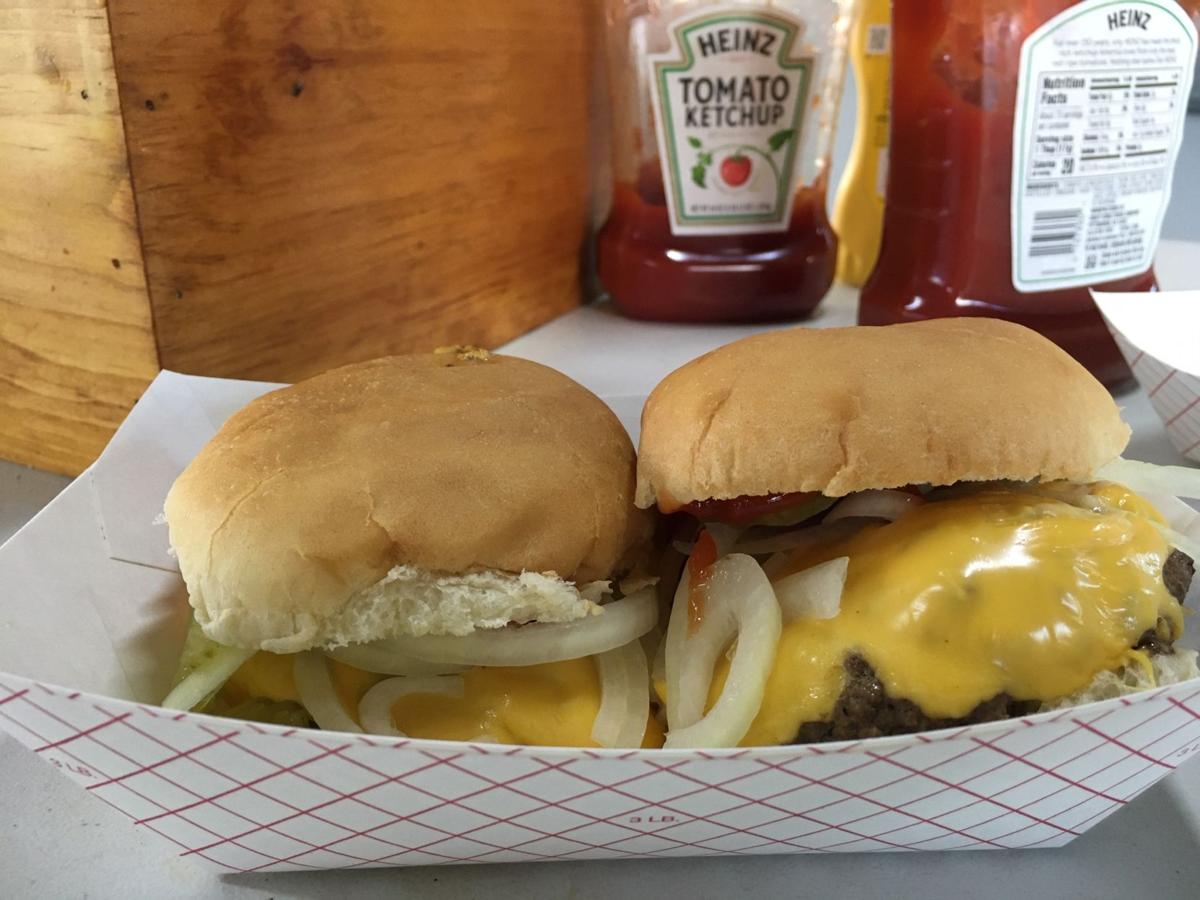 The fare at Burger Night is sold for $5 each, but profits for the American Legion are being reduced by the rising price of ground beef. It's up $2 a pound from last year. 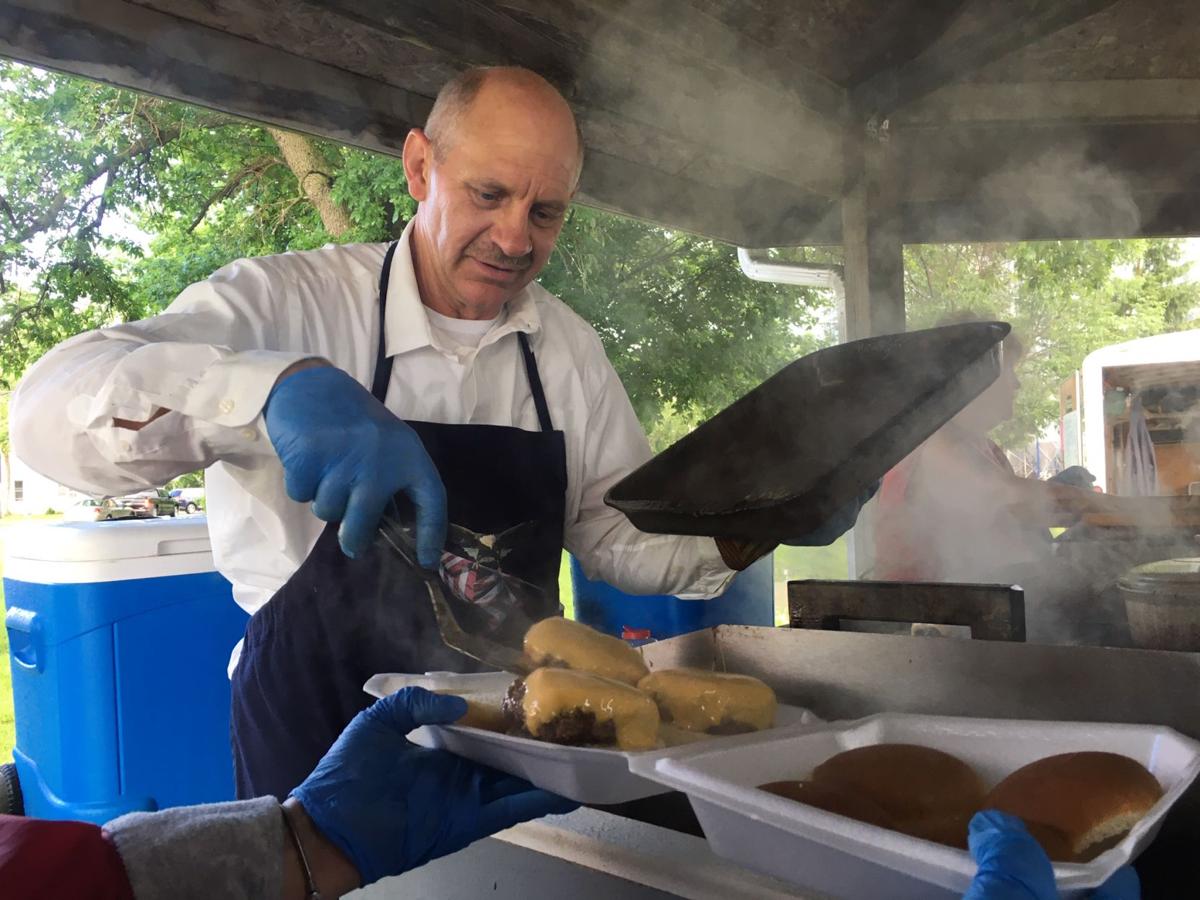 Tom Nondorf, president of American Legion Post 85 in Muscoda, heads up a spring morel mushroom sale but in the summer is busy once a month with a hamburger sale in the village's downtown. Proceeds from both fundraisers are used to support a variety of Legion programs, including flags on village streets. 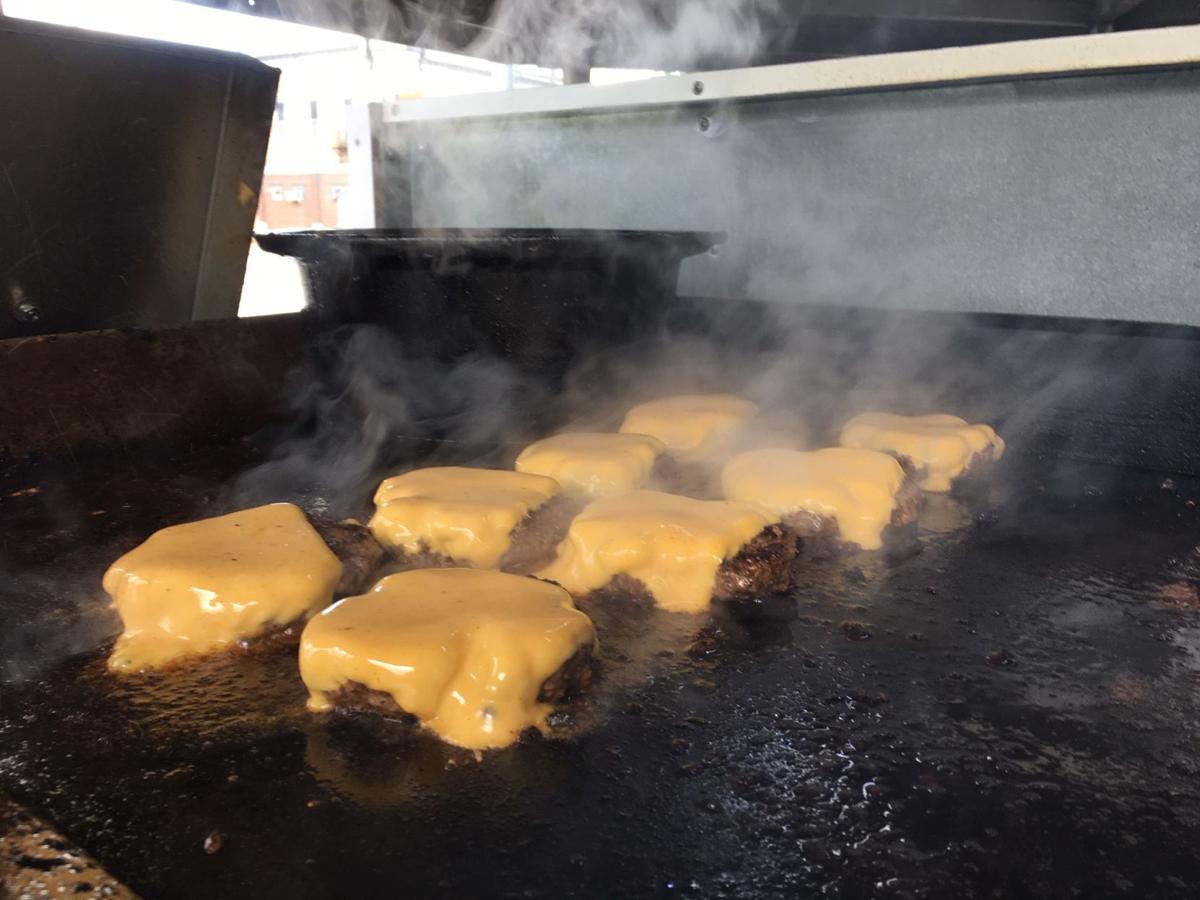 Cheeseburgers simmer on one of three griddles used at Burger Night in Muscoda. The event, founded in 2012, uses 280 pounds of hamburger and 80 pounds of American cheese per night. 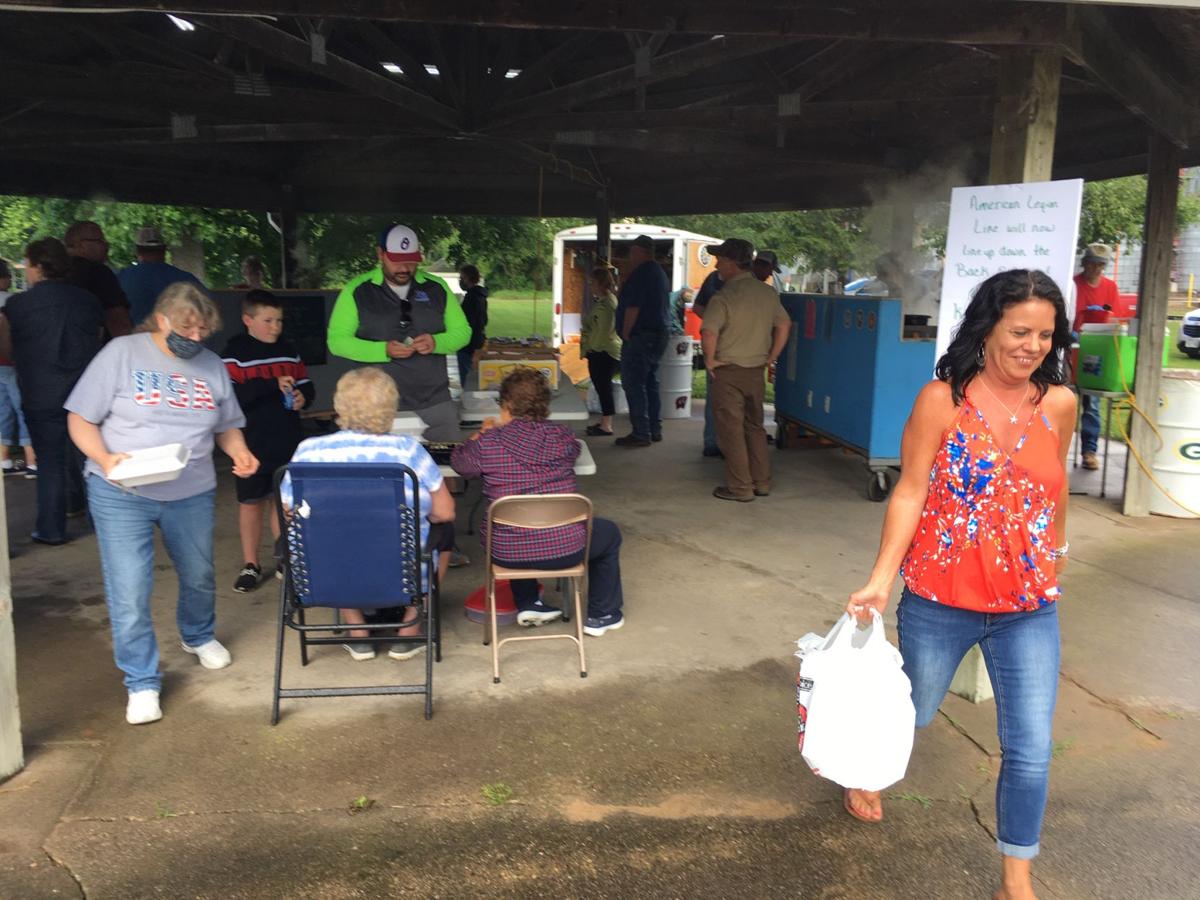 Wendy Roh is one of the best customers at Burger Night in Muscoda. Roh operates the Copper Lounge across the street from the Railroad Park gazebo and makes multiple trips each night to buy hamburgers for her customers. 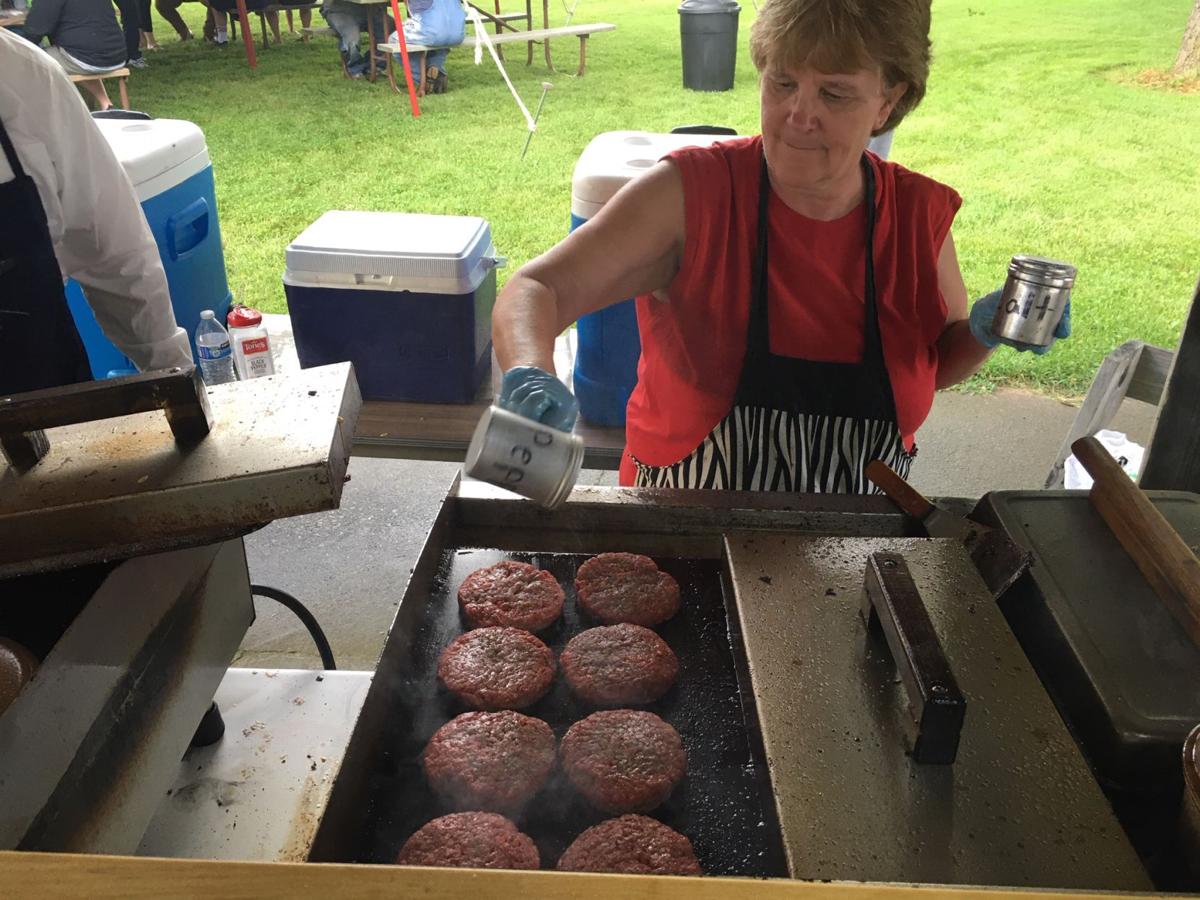 Linda Moriva uses tin salt and pepper shakers to season a grouping of eight hamburgers made with beef freshly ground the same morning at nearby Bender's Market. The patties were formed that morning by volunteers from the Muscoda American Legion Auxiliary. 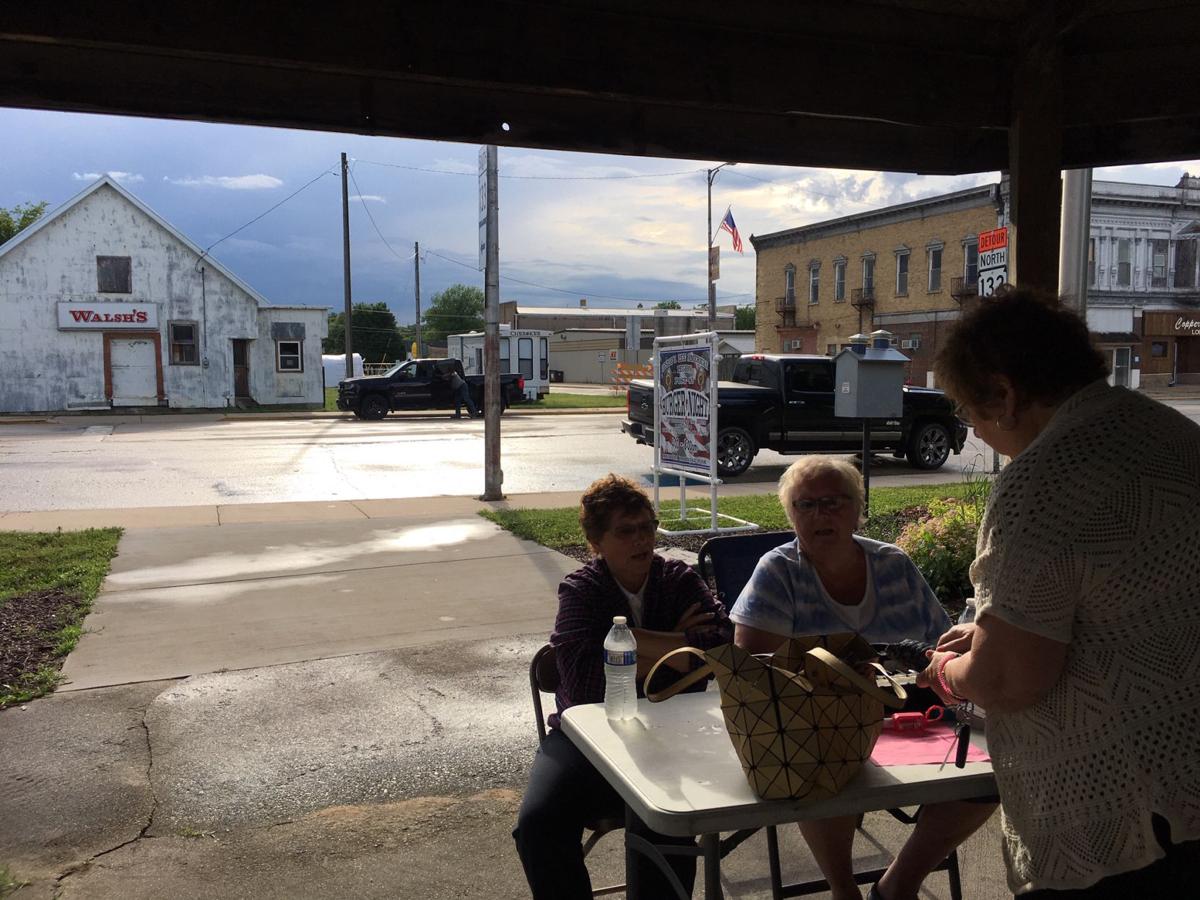 Annie Craig, left, and Judie Shemak staff the checkout at Burger Night in Muscoda. On Wednesday, 560 hamburgers were sold despite heavy afternoon rains. 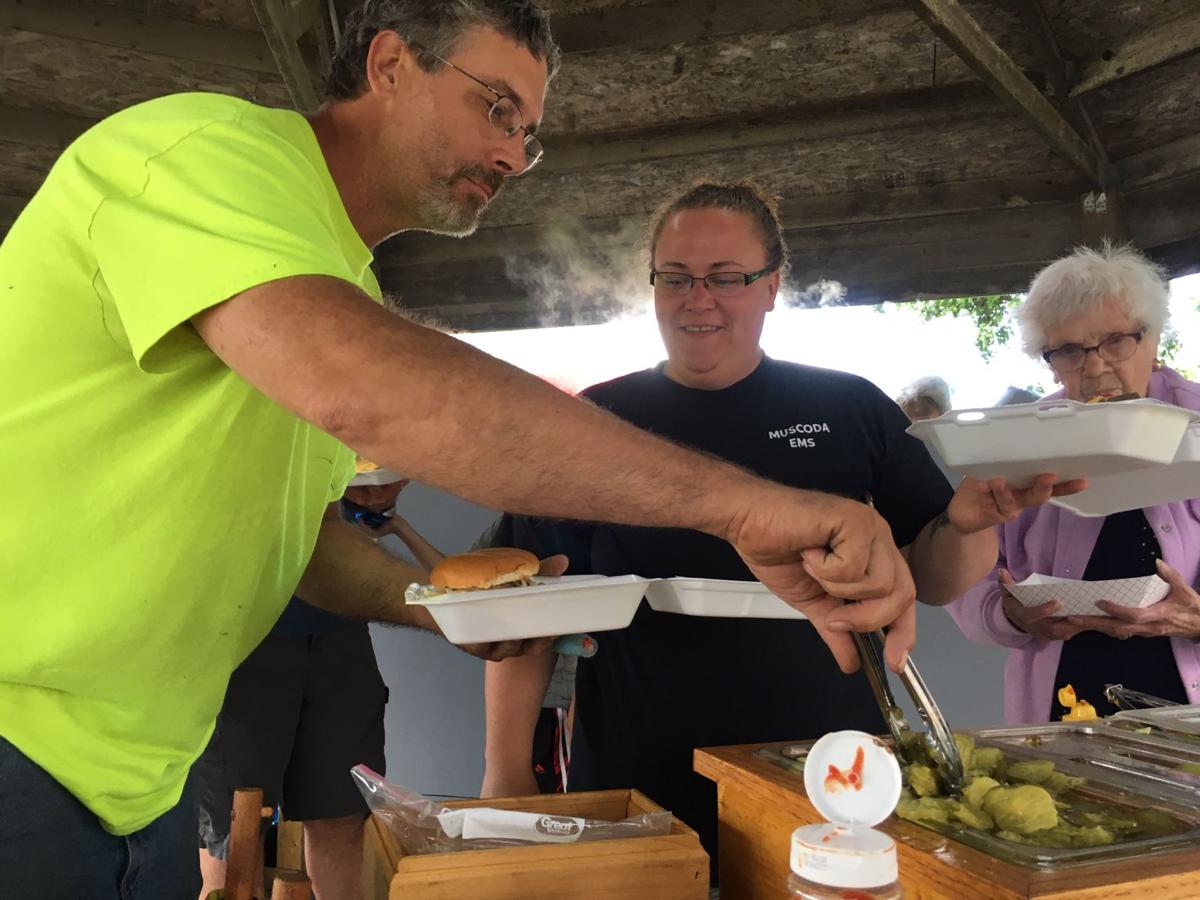 Dale Shemak, with daughter, Brooke Shemak, goes in for a topping of pickles at Burger Night. 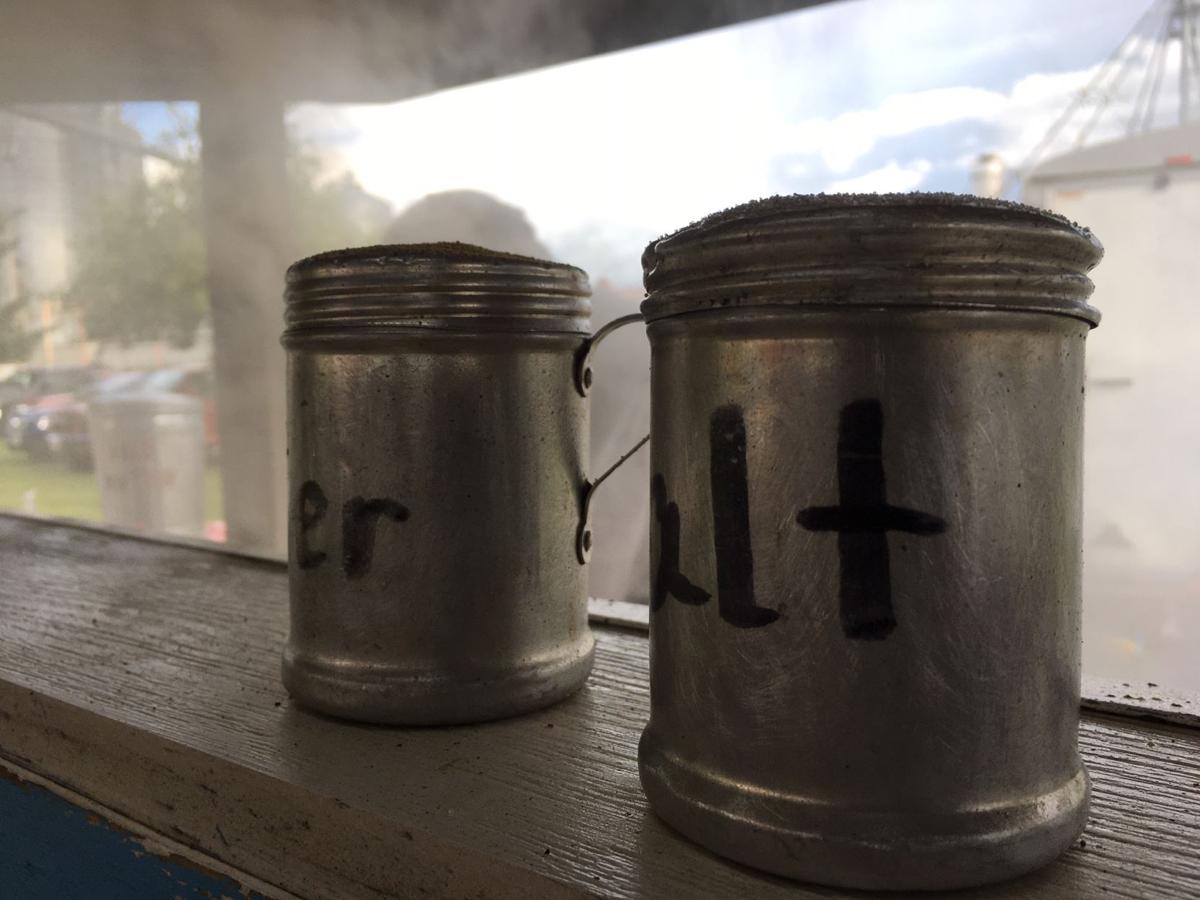 Steam fills the gazebo at Railroad Park in Muscoda once a month from May through October for Burger Night.