Amid nationwide calls to remove statues of Confederate soldiers and other controversial figures, a small city in southern Wisconsin decided Tuesday to remove its own statue of Christopher Columbus.

The fiberglass statue has stood for more than 30 years near the intersection of highways 16-60 and 151 on a state-owned parcel in the city of Columbus, which is about 30 miles northeast of Madison.

The Columbus City Council voted 4-1 to put the statue in storage until another use for it is found.

The decision comes on the heels of protests against racism and police brutality prompted by the death of George Floyd in Minneapolis police custody.

During the weeks of demonstrations, protesters have toppled monuments to Confederate soldiers and slave owners, but also some statues that have nothing to do with slavery, such as the replica of “Forward,” a statue of a woman with her right arm extended that had been on the steps of the Wisconsin State Capitol. Madison protesters also tore down and decapitated the statue of Union Civil War Col. Hans Christian Heg, an abolitionist who died at the Battle of Chickamauga.

In recent weeks, cities across the country have removed controversial statues, including one of U.S. vice president and slavery advocate John C. Calhoun in Charleston and statues of Confederate soldiers that used to stand in Mobile, Alabama; Norfolk, Virginia; and Louisville, Kentucky.

Christopher Columbus statues have caused controversy because although the Italian-born explorer used his skills as a navigator to find the Americas — opening the door for European exploration — he also enslaved, killed and mutilated Native Americans.

His statue in Columbus, Wisconsin, was installed in 1988. Dan Amato, owner and curator of the Christopher Columbus Museum in the Columbus Antique Mall in the city, commissioned the fiberglass statue in 1986. It was donated to the city.

Its home used to be a small park with trees, shrubs, various plaques and a picnic table, but the city sold the land to the Wisconsin Department of Transportation several years ago to serve as a highway right of-way. The DOT said it would wait to move the Columbus statue until the city found a new spot for it.

As of Tuesday, the statue still stood in the ditch along Highway 16-60, next to the back side of a Shopko and a combined Ace Hardware and Sentry grocery store — all of which have been permanently closed. There’s no spot dedicated for viewing the statue; residents see it as they drive by on the highway.

Some residents of Columbus called the statue an eyesore, and said it should either be taken down, moved or at least properly maintained if it stays.

“If they keep it, then they need to take care of it,” Gae Otis said earlier Tuesday, noting that the city never mows around the statue. She suggested keeping it or moving it to a museum.

During public comments at the council meeting, Jack Sanderson said the statue should remain where it is. He said agreeing to take it down or move it would be to erase history and “surrender to the mob.”

But Frank Roelke, a recent graduate of Columbus High School, said the city shouldn’t be memorializing someone who treated Native Americans so poorly. Keeping the statue up would be pretending that Columbus was a good person, when history shows otherwise, he said.

“Christopher Columbus stands for oppression and slavery and countless mistreatments of the native people,” Roelke said.

Council members debated whether to delay a decision on what to do with the Columbus statue until they could get more feedback from the community. Mayor Michael Thom said he liked the idea of having a referendum on the question in the November election because he’s never seen something that has elicited so much community interest.

Restore or replace? Community reckons with what’s next for Capitol’s fallen statues

But Ald. Ian Gray, 1st District, said the city shouldn’t drag out the process for months. He said while he would hope a majority of residents would vote for removal, council members shouldn’t rely on that.

“If we would have waited for a majority of people to end slavery, it would have never happened,” Gray said.

Ald. Trina Reid, 2nd District, said if the City Council refused to take the statue down, it would be “beyond unforgivable.”

The statue will be preserved until the city finds someone to buy it or figures out a better use for it.

The counties of Dane, Green, Lafayette, Iowa, Marquette, Green Lake, Columbia and Sauk are under a heat advisory from 11 a.m. to 7 p.m. Wednesday, with heat index values up to 100, according to forecasters.

St. Norbert in Roxbury gets a makeover along with a stunning view 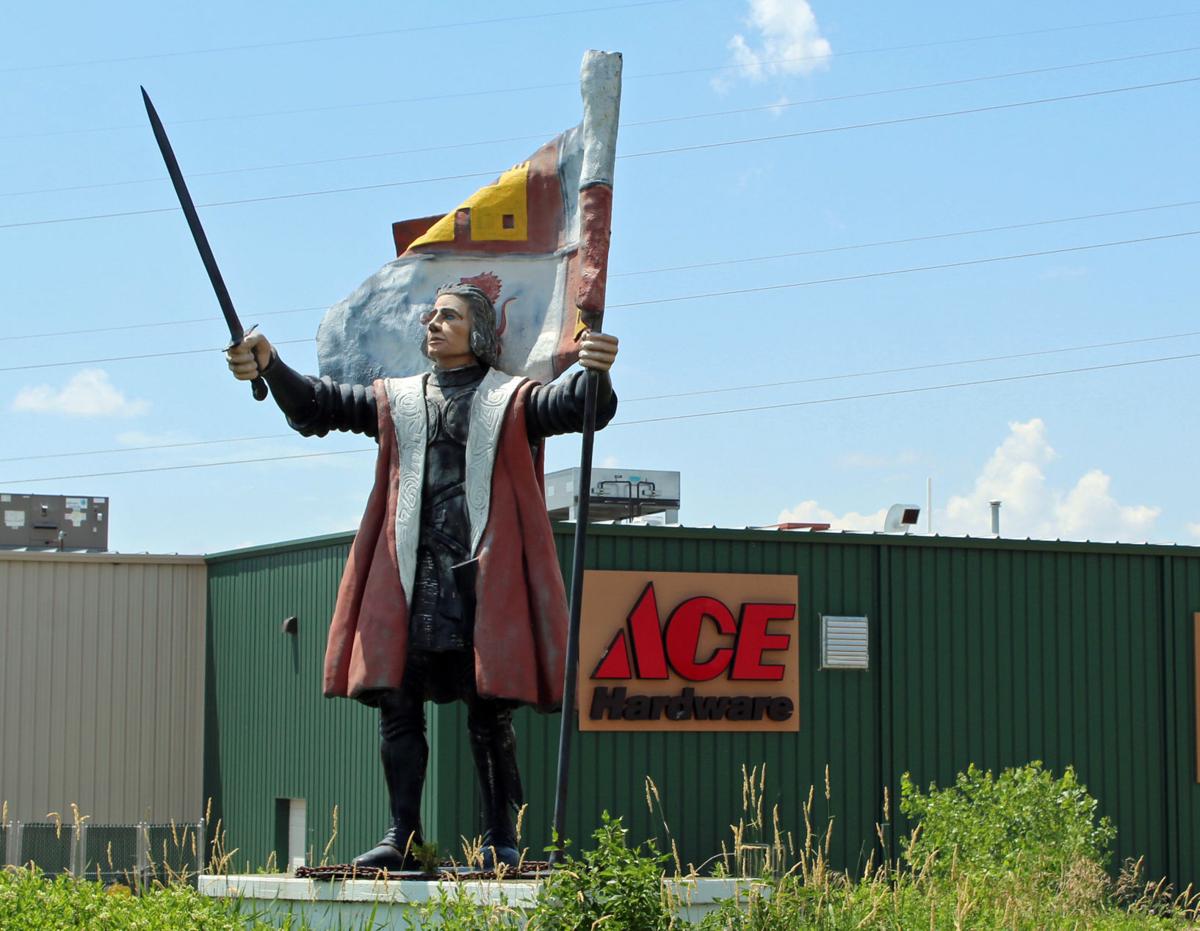 Columbus' fiberglass Christopher Columbus statue stands near the intersection of highways 16-60 and 151. 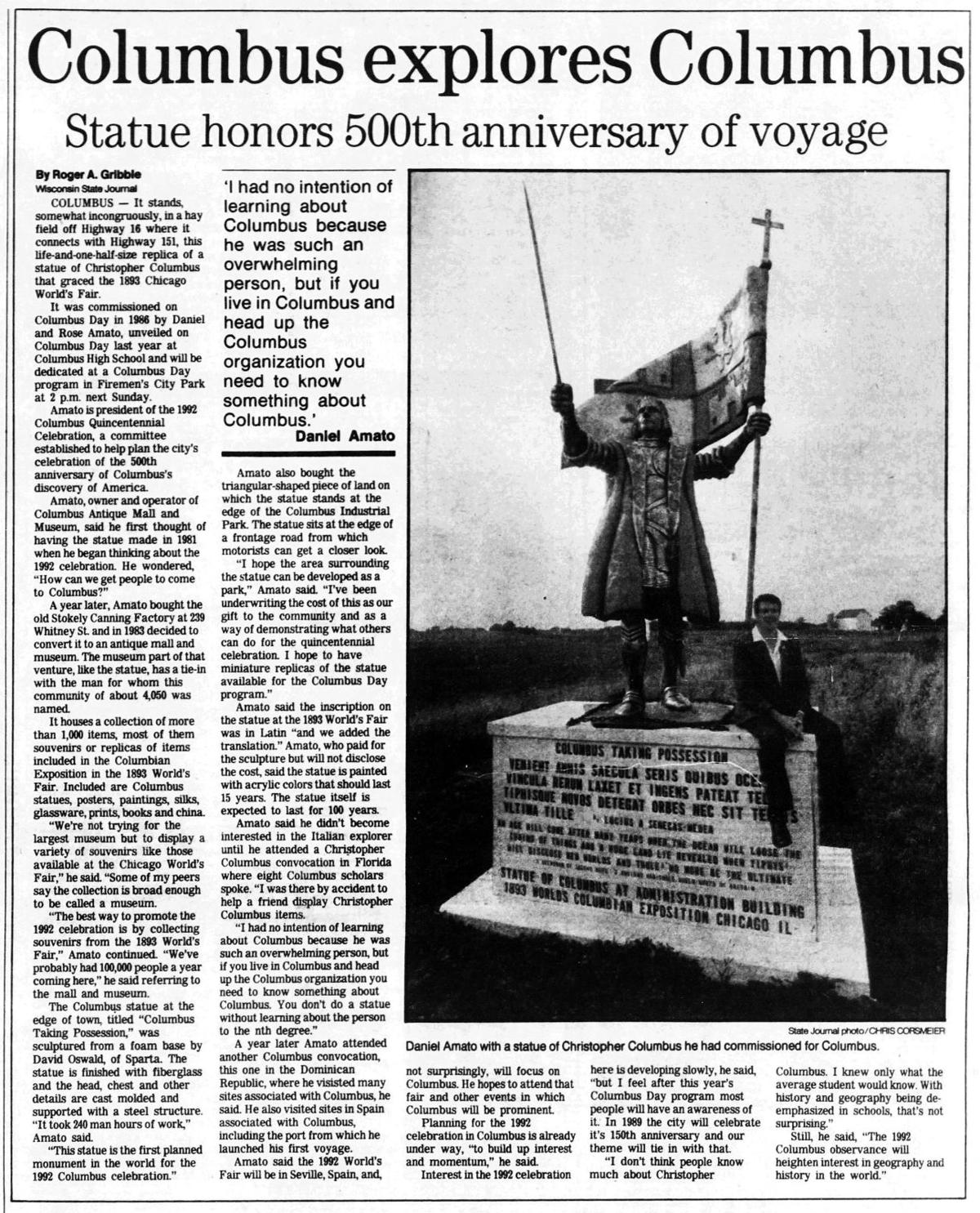 The Wisconsin State Journal covered the Oct. 2, 1988, installation of the Christopher Columbus statue in Columbus.