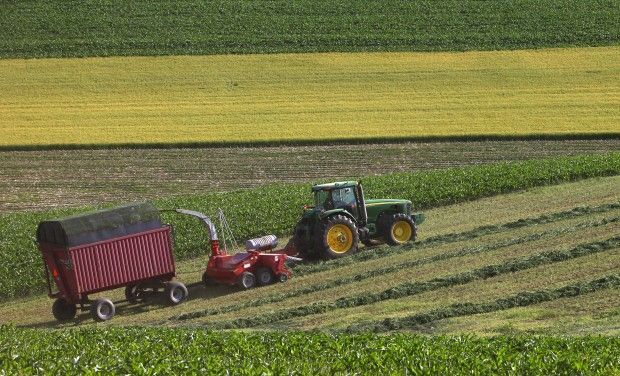 A farmer collects hay from a town of Springfield in this 2012 file photo. 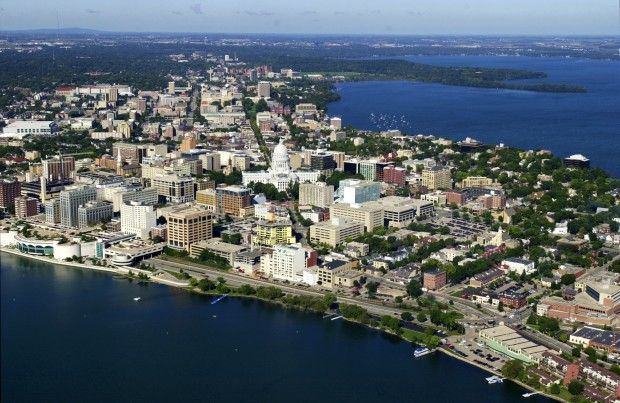 Dane County towns are pushing for legislation that would eliminate the county government's role in rezoning requests for development.

The Wisconsin Towns Association is helping several Dane County towns drum up support for legislation that would strip the state’s fastest growing county of its zoning authority.

The law would open the door to towns that have chafed for decades because the county has insisted on concentrating development in existing population centers. But county officials fear it would unleash costly, unsightly suburban sprawl by allowing towns to approve new construction without the possibility of being overruled by the county.

County Executive Joe Parisi says that if the Republican-controlled Legislature adopts the measure, water quality may be harmed and urban sprawl will spread across the farmland that now separates small villages and cities in the county.

“If this happens, people will look back and realize that this is one of those moments that allowed the feel and the character of the landscape to be degraded,” Parisi said. “People like being able to drive 10 minutes from the city and be in the countryside. This threatens everything that makes people want to live here.”

Tim Roehl, vice president of the Dane County Towns Association, said local officials have an interest in protecting what is good in their communities. But he said they want the autonomy to allow at least a little more development to be fair to landowners and help grow tax base to pay for town services.

“They think we are going to turn on a faucet of Walgeens development, and that’s not the case,” said Roehl, a member of the town of Middleton board and chairman of the government affairs committee of the Realtors Association of South Central Wisconsin.

Dane County government is dominated by Madison residents who have long made clear that they will reject significant residential development in rural areas, towns association attorney Mark Hazelbaker said.

Under current Wisconsin law, cities and villages control decisions on rezoning farmland for residential or commercial construction, but most towns share the authority. Both the town and the county hold veto power over proposals.

Towns can choose to become autonomous whenever their county writes a comprehensive revision of its zoning ordinance, but for decades Dane County has made only piecemeal amendments.

One reason the county board hasn’t initiated comprehensive rezoning is that board members have seen the value in collaborating on land use decisions with towns to control traffic and protect natural resources, Parisi’s chief of staff Josh Wescott said.

Roehl said nearly half the county’s 34 towns would strongly consider opting out. He said local builders support the proposal but area Realtors will remain neutral.

During the last legislative session, a bill that would have opened an opt-out window every few years won a public hearing but was never enacted, said Mike Koles, executive director of the Wisconsin Towns Association.

The statewide builders and Realtors associations were against it, as was the Wisconsin Counties Association.

Roehl said changes have been made to the Dane County-only draft in response to counties association concerns.

The Shawano-based association lists the Dane County-only bill as its top land use priority for the Legislative session because county officials are unfairly hindering home-building in rural areas, attempting to over-regulate gravel pits and obstructing an oil pipeline project, Koles said.

“Folks in Dane County towns have been doing their homework in the few weeks the session has been in,” Koles said. “This has been responded to very positively by the legislators that they’ve talked to and I think that’s the result of the county being so abrasive.”

The Legislative Reference Bureau wrote a bill draft at the request of Sen. Jerry Petrowski, R-Marathon, but no lawmaker had yet come forward to sponsor it by Friday, Roehl said.

Petrowski’s chief of staff, Tim Fiocchi, said the senator requested the draft because he often works closely with groups like the state and county towns associations, but because Petrowski’s district is so far from Dane County he probably won’t take the lead in introducing it. But Koles was optimistic someone would champion the bill.

Parisi said he is concerned that a legislator might insert the proposal into the state budget. The stark political divide between the Republican statehouse and liberal county board could motivate lawmakers to support the proposal.

The county was one of a small group that defied the Legislature and Republican Gov. Scott Walker by extending employee labor contracts for years after a 2011 state law removed most public sector union rights. The state Department of Natural Resources has twice overruled the county’s regional planning commission when it put the brakes on proposed expansions of development zones.

And Roehl said legislators may be motivated now by the county zoning committee’s decision to delay approving a permit for a new Enbridge Energy crude oil pipeline pumping station while it evaluates a company offer to provide local insurance against a possible spill.

State Sen. Tom Tiffany, R-Hazelhurst, said he wasn’t familiar with the zoning bill, but he and other legislators are watching the pipeline permit closely because of Dane County’s record of doing things differently and because expanding the flow of crude helps keep prices down for consumers and businesses.

“When we see this in Dane County it really captures our attention,” Tiffany said. “I hope that people with an ideological bent aren’t going to impede that pipeline.”

Tiffany wrote a letter to county zoning board chairman Patrick Miles asking what Miles’ intentions were and saying the pipeline was essential to the nation’s energy security. Miles met with Tiffany in the senator’s office, then wrote him a letter explaining the process.

Only 13 of 593 rezoning or conditional-use permits in Dane County were not approved from 2011 through the end of last year, county planning administrator Todd Violante said. Towns turned down six, while the county turned down seven that had been approved at the town level, Violante said.

Wescott said many more inappropriate proposals would materialize if the county wasn’t involved.

“There is no greater threat to the landscape and character of what people have come to know and love about living in Dane County than the fragmented, patchwork quilt land use process advocated for by the towns and those who financially benefit regardless of where development occurs,” Wescott said.

The county ranks first in the state in value of agricultural products sold and fifth in dairy production.

A push from the Dane County Towns Association to provide an opt-out from shared zoning authority with Dane County was not included in the state budget.

Enbridge Energy's plans call for tripling the flow through its Line 61, which carries heavy crude through Wisconsin.

But the DNR says the suburb needs to formally appeal a planning commission denial of 900-acre development request on sensitive land.

But planners say inflexible deadlines will short-circuit talks to lead to voluntary improvements in development proposals that protect quality of life.

A farmer collects hay from a town of Springfield in this 2012 file photo.

Dane County towns are pushing for legislation that would eliminate the county government's role in rezoning requests for development.