They drop sporadically with a thud much to the delight of the resident squirrels who hoard them away for future sustenance.

But the fruit of the black walnut has another predator. He arrives in a red Toyota Tacoma and is armed with the Nut Wizard, a rolling walnut collection device. The wire ball at the end of a stick can easily and quickly clear a yard of the pool ball-sized fruit that can be turned into a projectile by a lawn mower or rot, leaving a blackened mess.

And just like the bushy-tailed rodents with whom he competes, Jesse Peterson, owner of J’s Black Walnuts, is also squirreling away his quarry. Only most of it will be vacuum-sealed and sold online at jsblackwalnuts.com. They’ll also be available at the Fitchburg winter farmers market at Promega and farmers markets next spring. Some of the meat will also find its way into cookies, bread, pie and even cheesecake.

“This is tree to yard to my garage to table,” Peterson said with a laugh. “I’m about as big as I can get right now with one person.”

What began as a hobby picking up and processing black walnuts from the backyard of his town of Middleton home has turned into a nomadic, time-consuming and tedious business venture. This year’s fall harvest has taken him to Sauk City, Beaver Dam, Verona, Middleton and Belleville. But come November, his routine will be homebound. Peterson will spend the winter in his basement with a vice and wire snips cracking and prying four to six hours a day in an effort to turn 50,000 walnuts into more than 300 pounds of meat.

Packages of nuts sell for $22 per pound, $11.50 for 8 ounces and $6 for 4 ounces. Those prices are in line with scores of other locally produced items that can include high-octane beer, spirits, aged cheese, cured meats, chocolate and morel mushrooms, which can be hard to find and can fetch more than $30 a pound depending on the season.

But unlike the morel, homeowners are more than happy to have Peterson come and clear their properties of black walnuts.

Peterson recently was in Fitchburg at the Syene Road home of Chris Gill. The front yard of the more than 2-acre property is filled with about 20 black walnut trees that create ample shade and an idyllic and picturesque setting for the home that she and her now late husband built in 1996. But Gill, who works in information technology, has come to dread the fall ritual when her trees begin dropping their green balls of fruit.

She met Peterson earlier this year at the Fitchburg Farmers Market. On one visit to her property this month, Peterson filled 10 buckets with black walnuts.

“Some years it’s so thick in areas I can’t mow over it and I have to rake them up and dispose of them,” Gill said. “I’m happy that I can help support him. I don’t have enough patience. I’d much rather support a local guy that does the shelling.”

Peterson isn’t paid for his service nor does he pay for the walnuts. About 99 percent of the people he has approached about picking up their yards are all in with Peterson doing cleanup in what he calls a win-win.

Black walnut trees are native to Wisconsin and can grow to over 100 feet tall. They should not be confused with English walnuts, which have tan shells and meat that is used in baking, particularly around the holidays.

Carrie and Mike Schneck in Middleton have 18 black walnut trees surrounding their historic home near the city’s downtown. Peterson has been collecting walnuts at the Schneck’s home since 2017. Prior to that, the Schnecks were forced to pick them up themselves and throw them away. Carrie Schneck, who has a child with a nut allergy, said they never considered trying to harvest the meat from inside the shells.

“Those nuts are very hard to crack,” Schneck said. “It sounds like a ton of work, and then a member of my family wouldn’t be able to eat them. So we never thought about doing anything with them.”

Peterson met the Schnecks after seeing their trees and leaving a note at their door. Peterson also sends letters to homeowners who have black walnut trees instead of knocking on doors, which he feels might be more intrusive.

“Almost, without exception, people say please come get them off my property,” Peterson said. “I had one lady who, when she got my letter, thought she had won the lottery.”

At that property just north of Beaver Dam, Peterson in late September collected 25 buckets of walnuts from six trees. He picked up another 17 buckets from under one tree at a neighboring property across the road.

Peterson, 59, grew up in Waukesha, graduated from UW-Whitewater and spent 30 years in manufacturing before retiring. He works part time in the distillery at Wollersheim Winery near Prairie du Sac and began collecting walnuts at his home near Summers Christmas Tree Farm off Airport Road in about 2013. He tinkered around with recipes and processes to clean and extract nuts before going commercial in 2015.

“When I talk to folks at the farmers markets they come by and they say, ‘Wow, that’s a lot of work,’” Peterson said. “It keeps me sane and keeps me out of trouble.”

He purchased the Nut Wizard online for about $75 but used his manufacturing background to construct a device in his garage to remove the green outer husk from the nut. It’s essentially a spare tire from a trailer that is powered by an electric motor and resembles a pitching machine that squishes the husk off the nut when it’s pressed against a steel plate.

The nuts are then placed in a water trough. Those that float are discarded, since they aren’t fully developed, while those that sink are transferred to a home-designed, and hand-cranked, steel washing machine. After five minutes, the batch is removed, hosed off with clean water and then placed on drying racks in the driveway. After a few days, the nuts are cured in onion bags and hung in the garage for six weeks.

Then the cracking, picking and bagging begins. It brings back memories of his grandfather who lived in Eastman, near Prairie du Chien, and who occasionally would pick up walnuts, spread them out in the driveway and use the family car to drive over the fruit in an effort to remove the husks. On some occasions, Peterson, then a child, would sit in his grandfather’s lap and “steer.” But his grandfather’s love was hickory nuts, another challenging nut to crack.

Photos: From tree to yard to table, the journey of local black walnuts

Point your smartphone's camera here to view a video of how Jesse Peterson harvests and processes black walnuts.

At least five people in Northern California have contracted the omicron variant of the coronavirus, and the outbreak is linked to a wedding in Wisconsin last month.

Dennis Frye, 66, died after contracting the pneumonia-like bacteria that spreads in water systems, the lawsuit says.

Police have released bodycam footage of a traffic stop with a man who said he was an NBC producer under direction from a boss in New York when he followed a jury bus during the Kyle Rittenhouse trial.

The case was identified in a Wisconsin resident who had recently traveled to South Africa.

COVID-19 hospitalizations are at highest level this year, with the most patients on ventilators since the pandemic began.

A Burlington city official cautions that a "tsunami" flood could occur if the Echo Lake dam fails as the city holds a community meeting to gauge sentiment from a divided public on spending $5 million to modernize the dam and lake.

‘Everyone knew!’ Problems with UW-Madison prof who led 'toxic' lab persisted for 2 decades

Engineering professor Akbar Sayeed left behind a "career-long string" of victims, according to a recently released report.

"Mental illness is real and the system is broken," the suspect's mother wrote in a letter released Wednesday.

What happens in Wisconsin if Roe v. Wade is overturned?

Abortion has emerged as an issue in the 2022 election as enforcement of the state's 19th century abortion ban could be at stake. 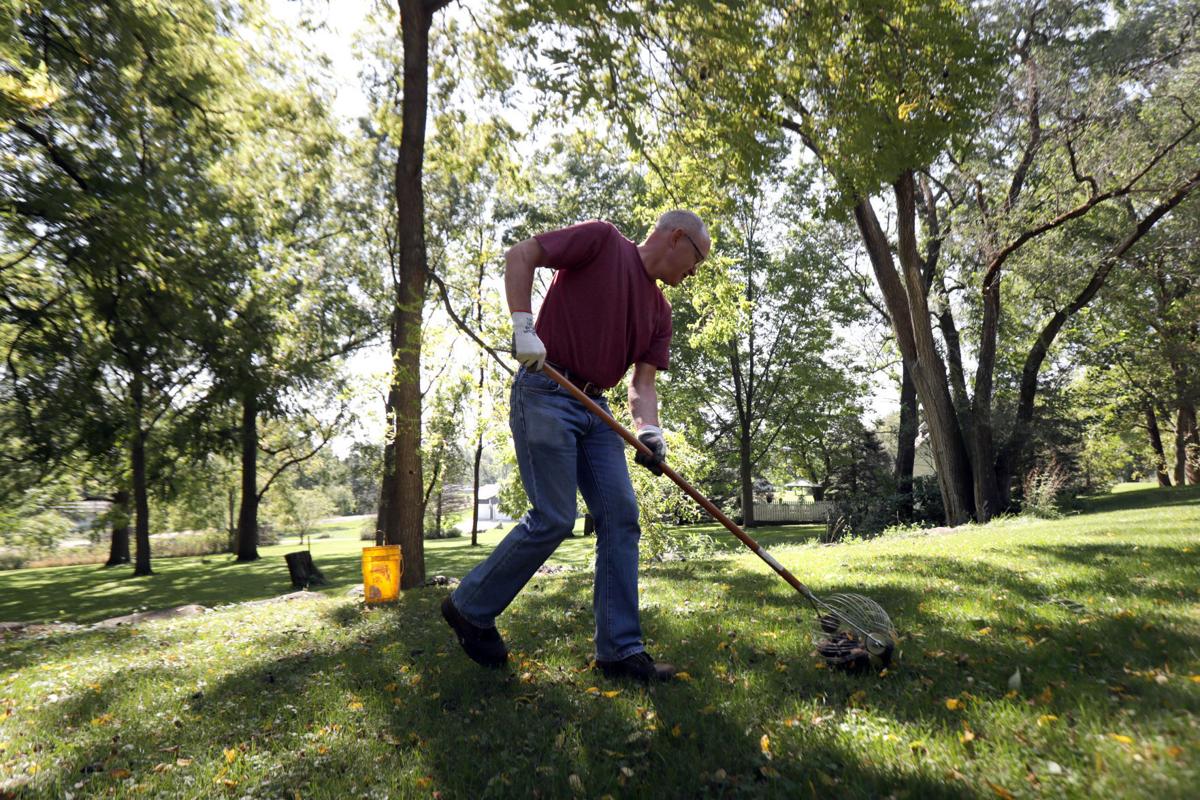 Jesse Peterson uses the Nut Wizard, a rolling wire ball, to harvest fallen black walnuts from the yard of Chris Gill in Fitchburg. Peterson hopes to collect 50,000 walnuts this fall, all of which come from property owners thankful to have someone remove the pool ball-sized fruit from their yards. Peterson, founder of J's Black Walnuts, sells the meat from the nuts online and at area farmers markets. 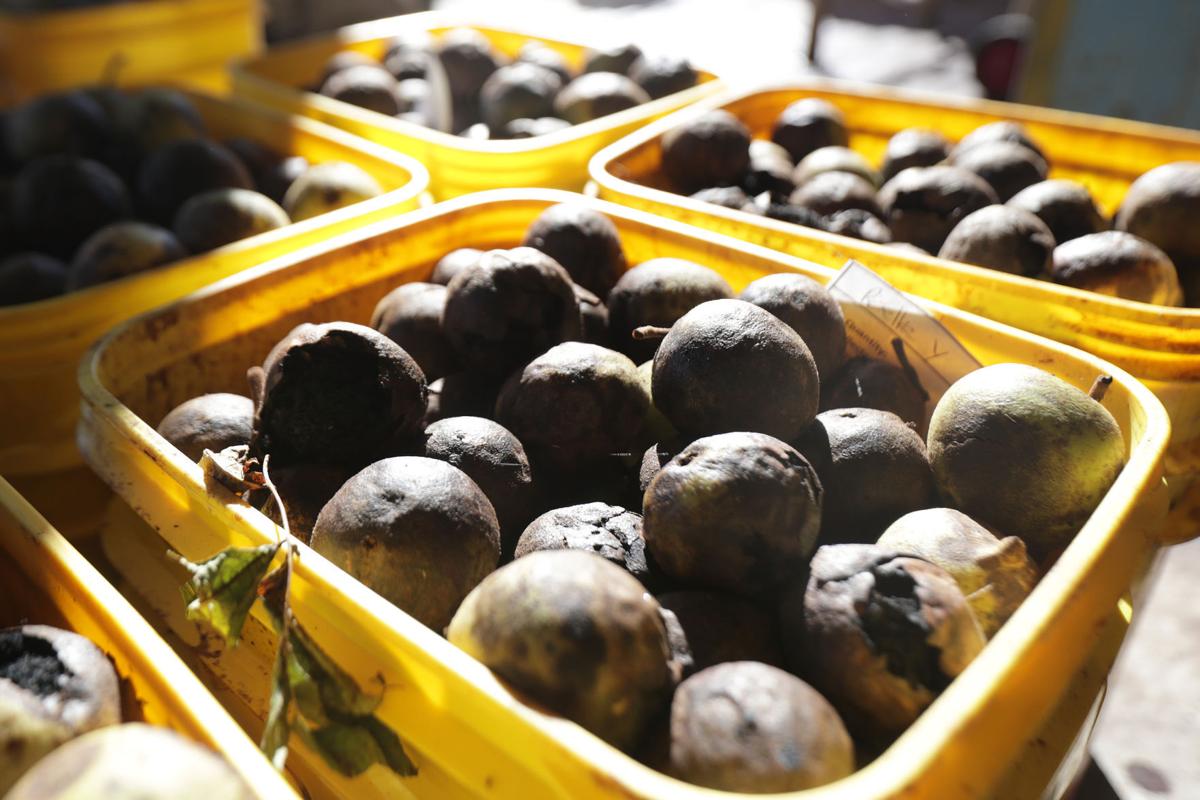 Buckets of black walnuts await processing at Jesse Peterson's town of Milddleton home. Peterson will spend the winter removing the meat from the hard shells. 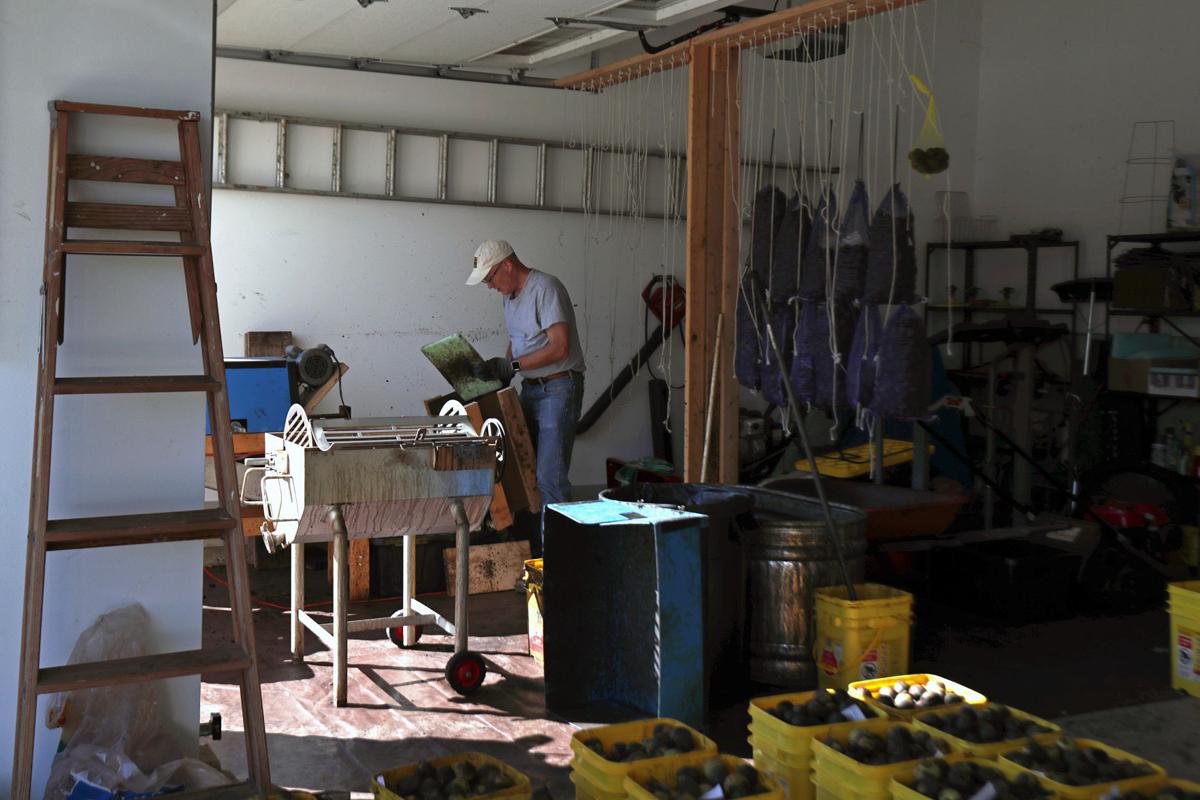 Jesse Peterson spent 30 years in manufacturing and is using that experience in his J's Black Walnuts processing facility located in his town of Middleton garage.  He began harvesting black walnuts from his backyard in 2013 before starting his commercial operation in 2015. 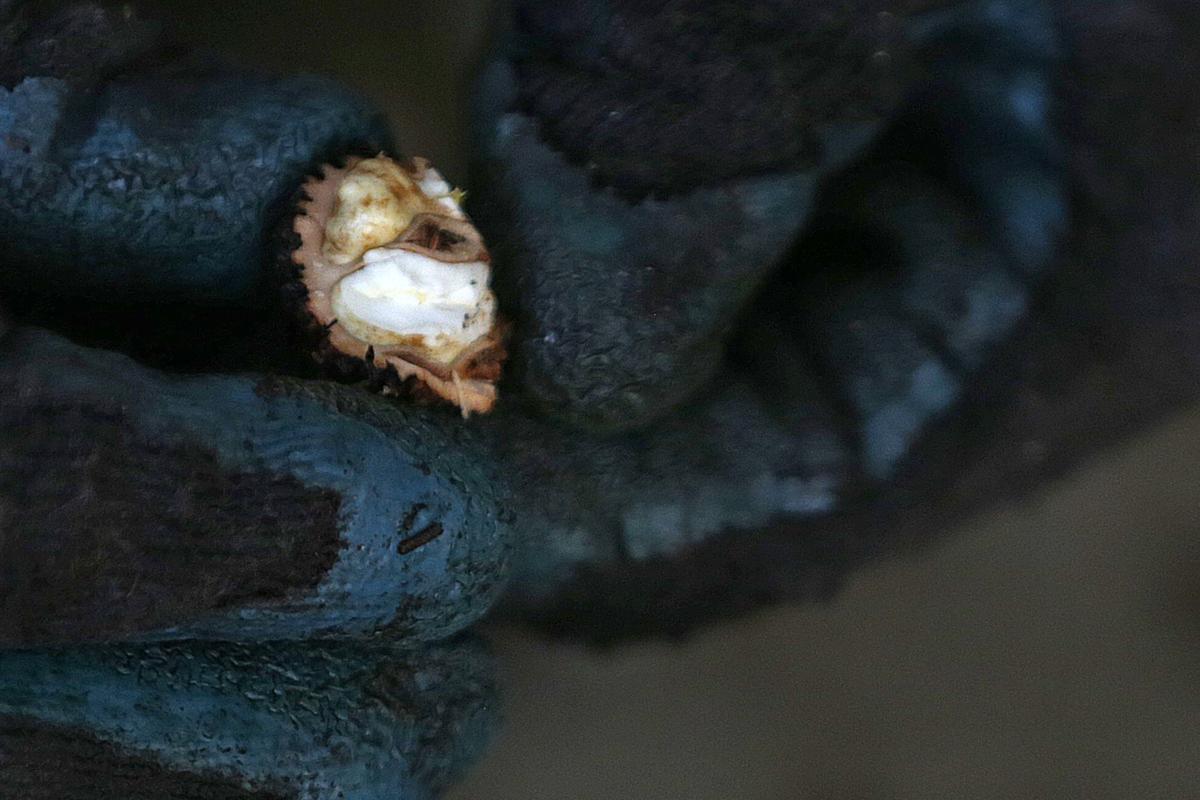 Jesse Peterson displays the nut meat of a cracked black walnut. It takes about 50,000 walnuts to get 300 pounds of nut meat. 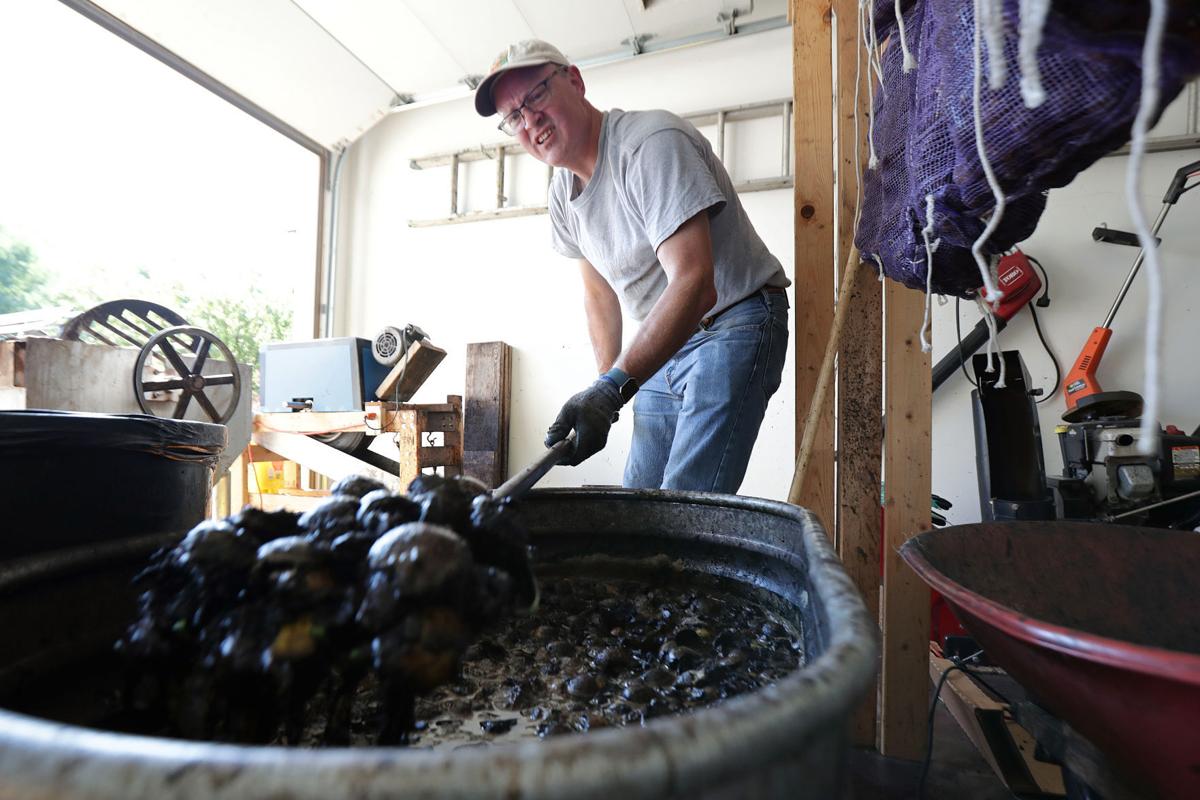 After the husks are removed by a home-built machine, the black walnuts are placed in a trough of water. The nuts that sink are then pulled from the bottom of the tank and then washed, dried and cured for six weeks. Peterson will spend much of the winter using a vice and wire cutter to remove the meat from the nuts. 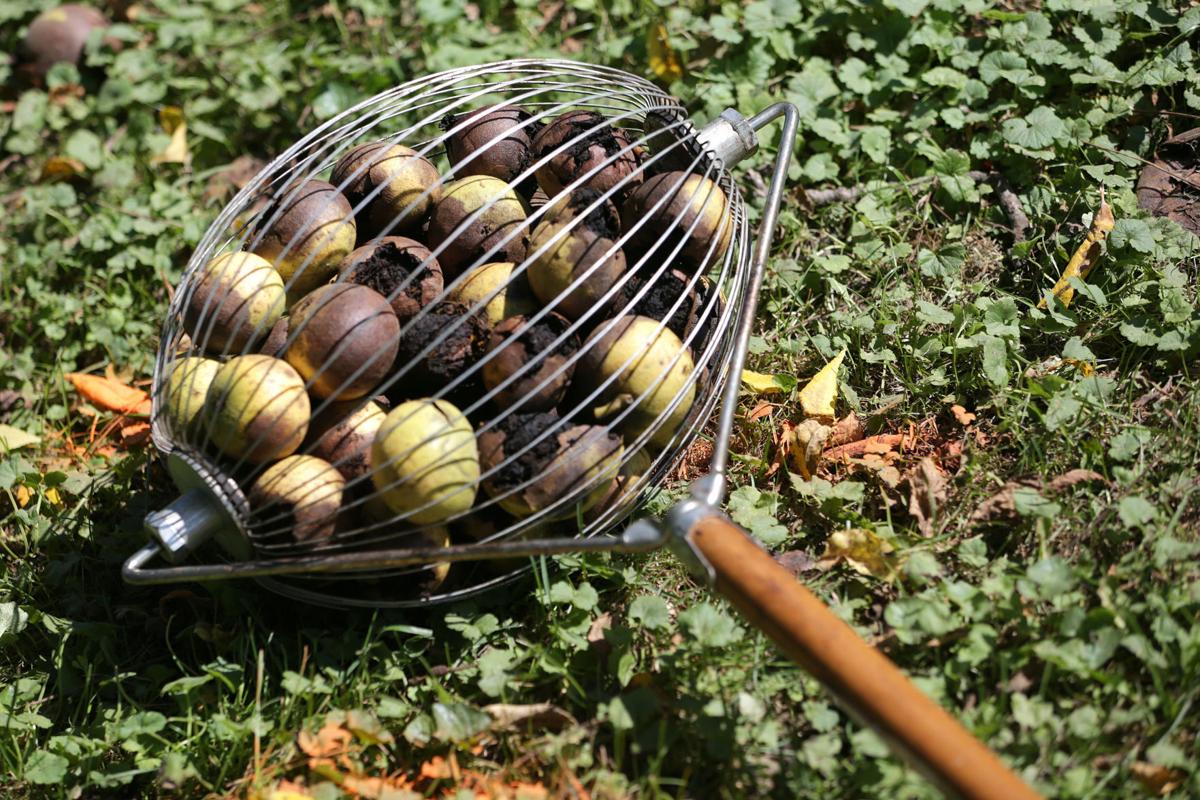 The basket of the Nut Wizard is rolled along the ground and quickly and easily collects black walnuts. 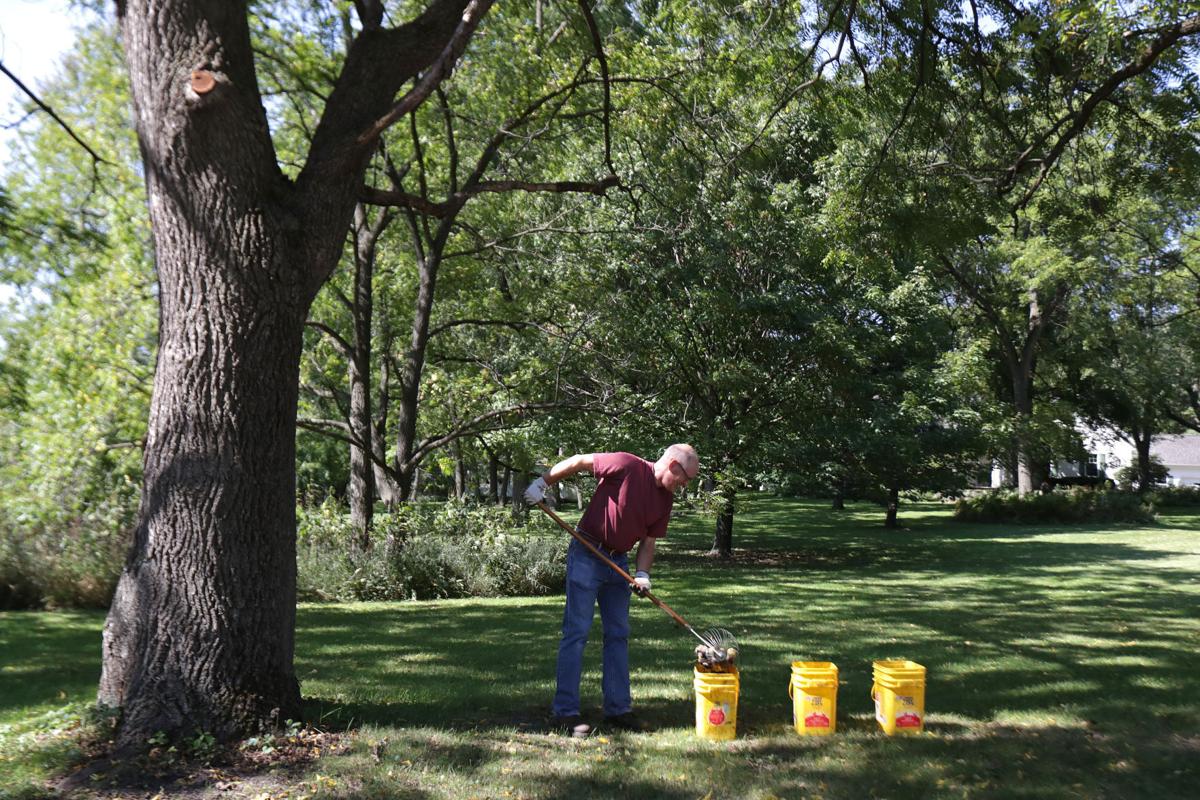 Jesse Peterson harvests fallen black walnuts from the yard of Chris Gill along Syene Road in Fitchburg. The property has about 20 black walnut trees that drop thousands of black walnuts. 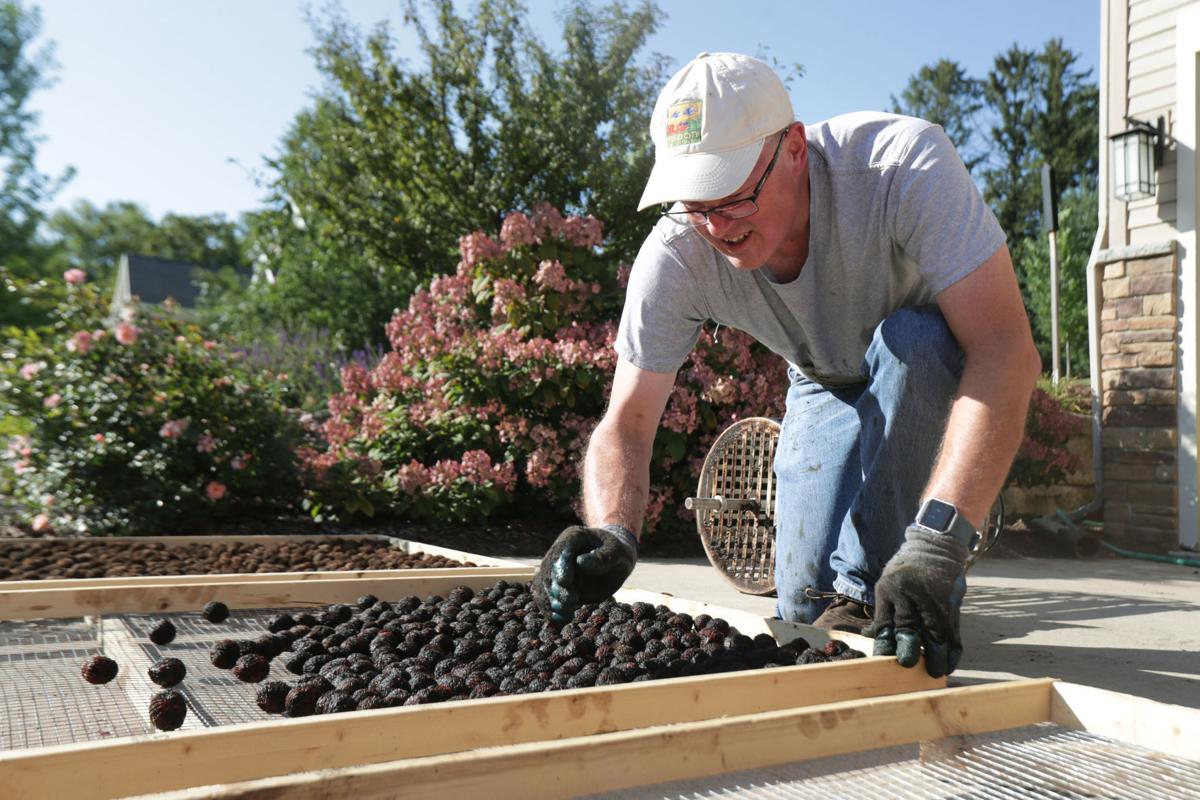 Jesse Peterson spreads out freshly rinsed black walnuts on a drying screen in his driveway in the town of Middleton. After they are washed, the nuts dry for a few days before being placed in onion bags and hung to cure for six weeks. 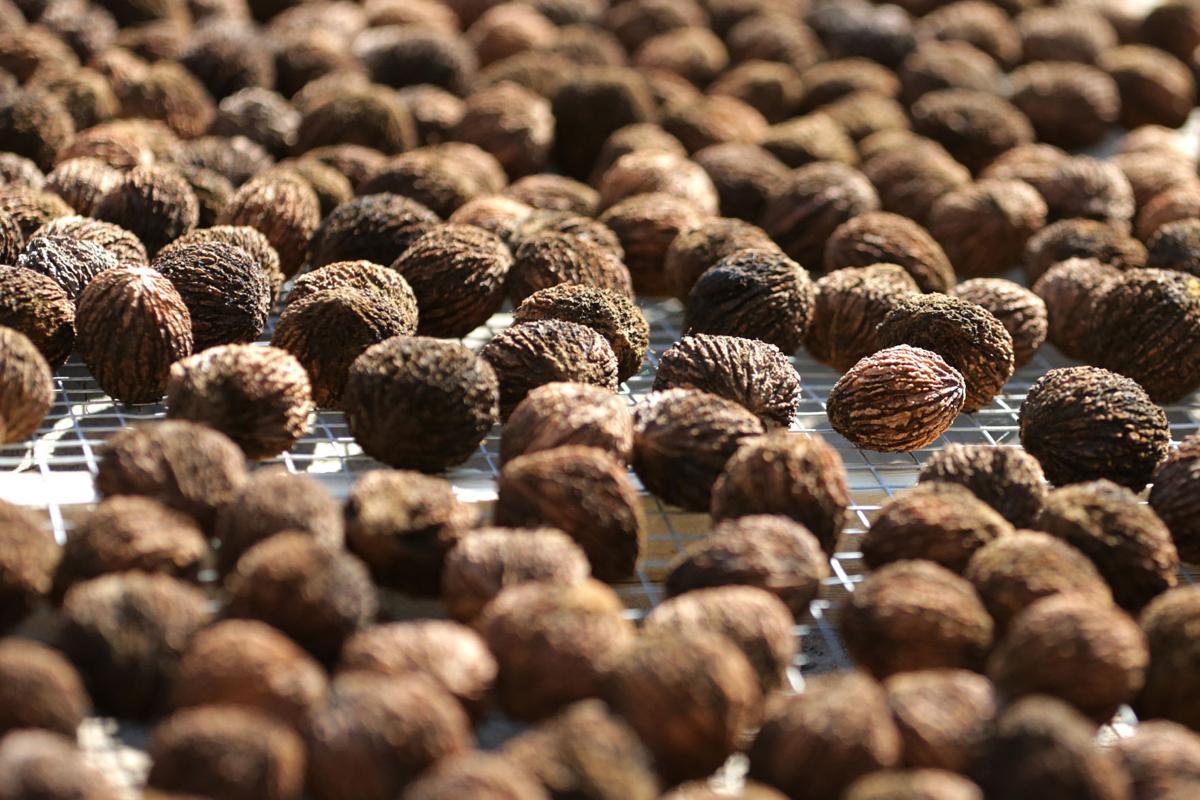