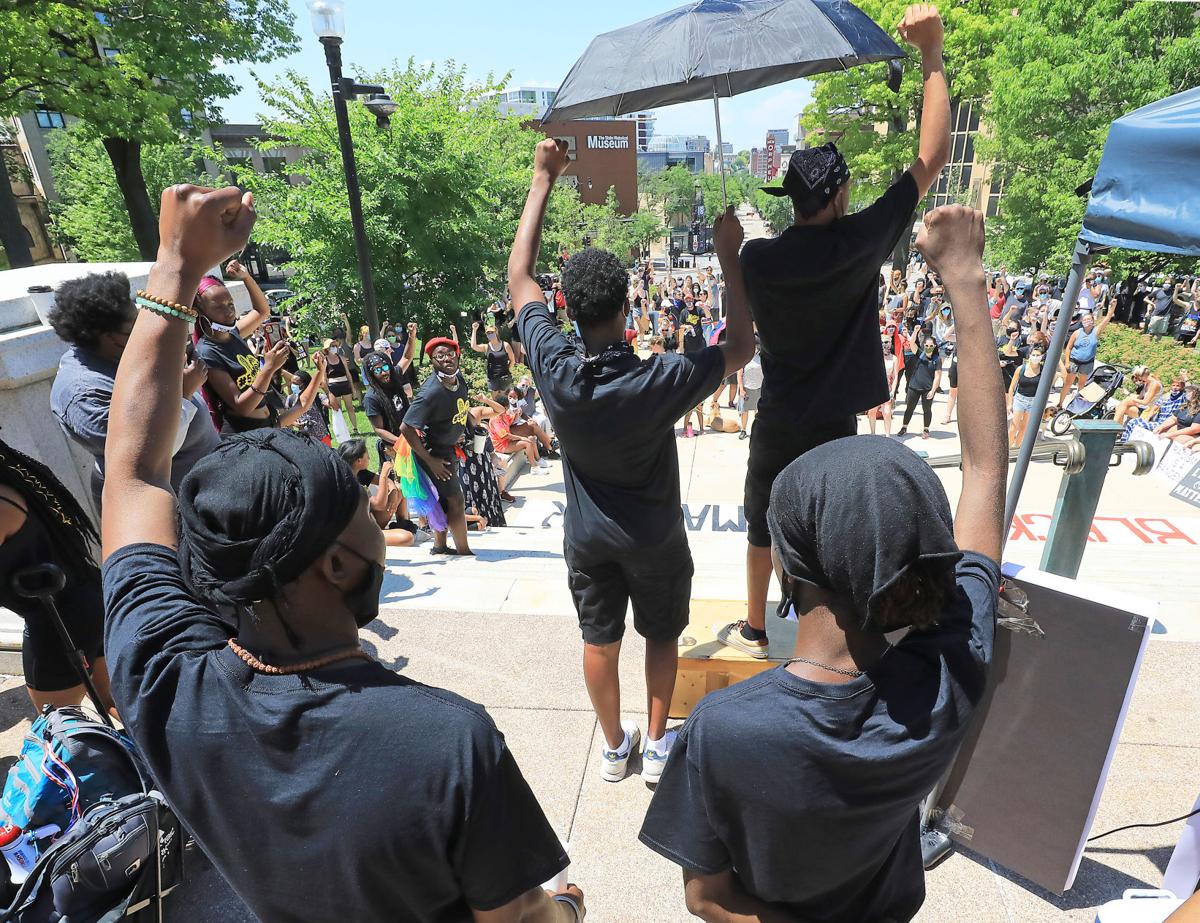 Members of 50 Miles More hold alternating fists in the air — one representing solidarity and the other freedom — during Saturday's rally at the state Capitol. 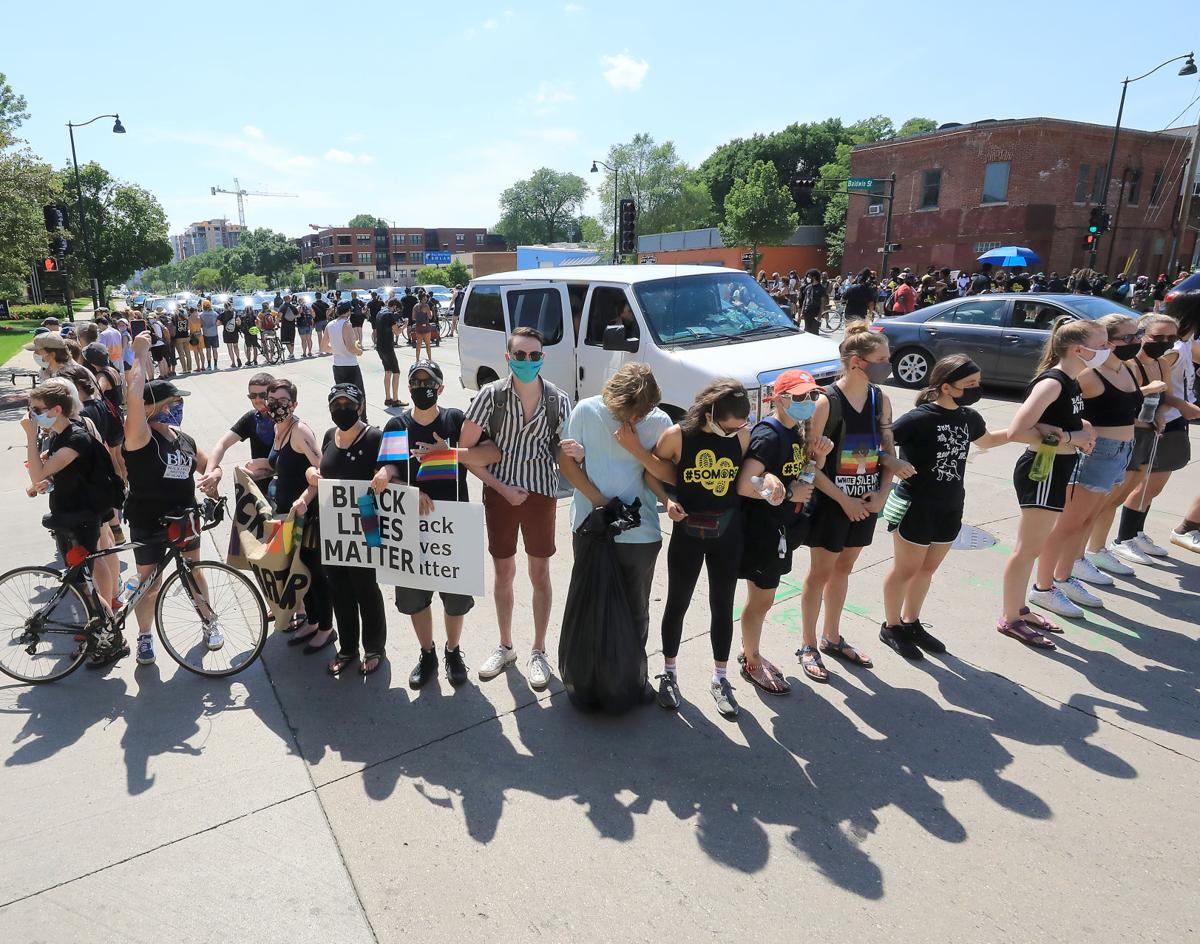 Supporters of the Black Lives Matter movement form a circle around Black participants as part of a demonstration Saturday on East Washington Avenue. 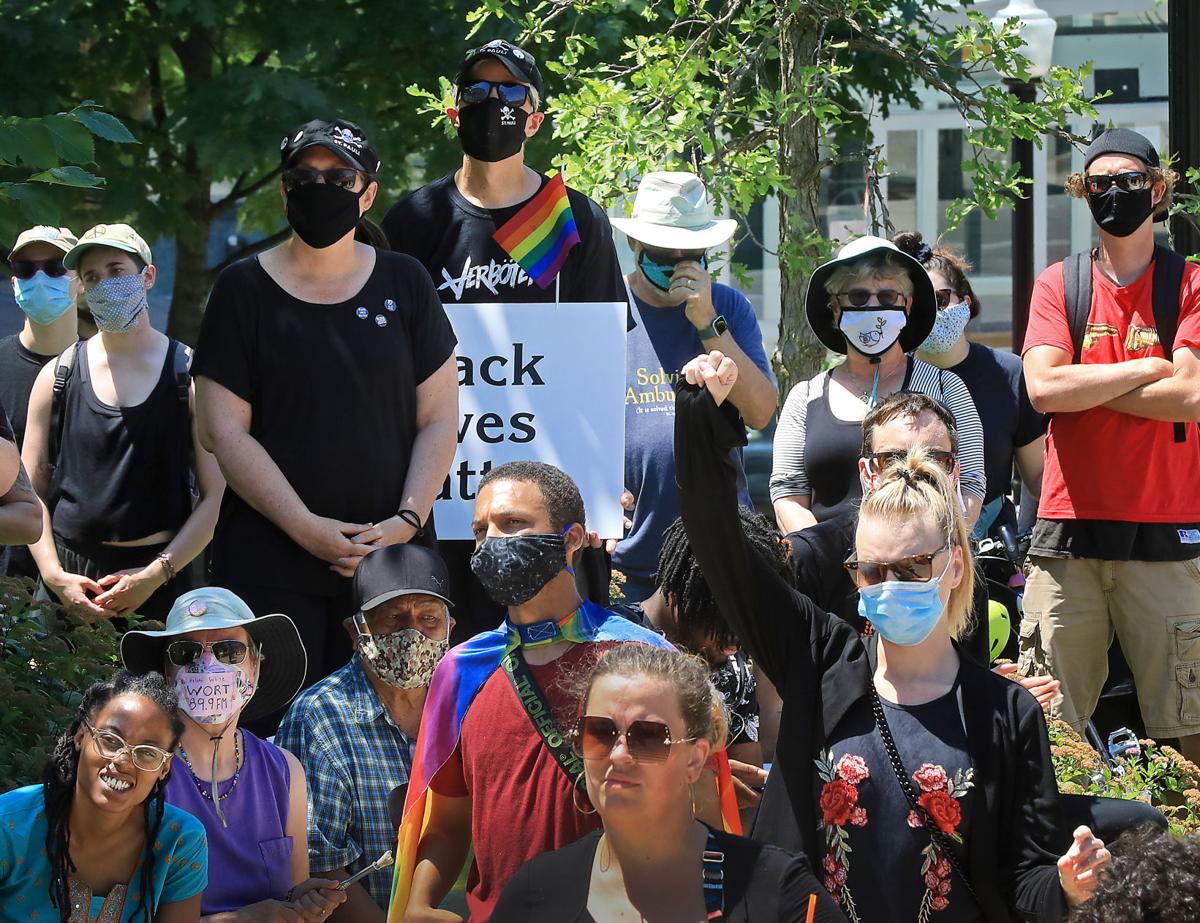 Black Lives Matter supporters listen to speakers during a rally Saturday on the steps of the state Capitol.

A group of youth activists finished a 65-mile march from Milwaukee to Madison on Saturday with rallies at the state Capitol and the Governor’s Mansion.

On the steps of the Capitol facing State Street, members of 50 Miles More — fresh off the five-day walk — took turns on a “soap” box. Shielded from the intense midday sun by a black umbrella, they made passionate calls for transformational change to systems that marginalize Black and Black LGBTQ communities.

“Yes, we’re all fighting the same fight, but we have to stand together,” said Chris Washington, who raised both fists before the crowd to represent “freedom and solidarity.”

Among the speakers was Lorien Carter, whose nephew Tony Robinson was fatally shot by a Madison police officer in 2015.

“I support them 100%,” she said. “I’ve watched these 18- to 21-year-olds have bigger and better conversations than I’ve seen adults have in my entire life.”

Later in the afternoon, the group proceeded to the Governor’s Mansion in Maple Bluff, briefly blocking traffic on East Washington Avenue around 3 p.m.

The group is calling for Gov. Tony Evers to condemn the use of tear gas and sponge rounds by police to quell violent outbursts during the protests following the death of George Floyd after a Minneapolis police officer knelt on his neck, as well as for special legislative sessions on gun and police reform, and for state lawmakers to support Black Lives Matter.

The 50 Miles More march follows in the footsteps of the Rev. Dr. Martin Luther King Jr.’s 54-mile march from Selma to Montgomery, Alabama, in 1965. In 2018, the group organized a similar march from Madison to Janesville, the hometown of former House Speaker Paul Ryan, to demand gun-control legislation.

The Food and Drug Administration has granted priority review to an application for StrataGraft, a regenerative tissue developed by a Madison company as an alternative to skin grafts in treating burns.

The test, which has not been approved for clinical diagnosis, is being tried out on volunteers in Madison.

The layoffs apply to System administration employees, not those working for one of the 13 universities.

State health officials on Friday added unconfirmed negative COVID-19 test results to part of their daily summary, following concerns that a backlog of negative tests was skewing data to make it look like a higher percentage of people was testing positive.

IOWA CITY, Iowa (AP) — A rare storm packing 100 mph winds and with power similar to an inland hurricane swept across the Midwest, blowing over…

Enbridge Energy notified utility regulators Friday that it was withdrawing its application for the authority to take private property for its Line 5 reroute and announced Monday that it has negotiated rights for all the private land needed.

As an African immigrant, Baldeh campaigned with a focus on adding diversity to the state Legislature in order to tackle hard issues, such as racial and economic injustice.

Members of 50 Miles More hold alternating fists in the air — one representing solidarity and the other freedom — during Saturday's rally at the state Capitol.

Supporters of the Black Lives Matter movement form a circle around Black participants as part of a demonstration Saturday on East Washington Avenue.

Black Lives Matter supporters listen to speakers during a rally Saturday on the steps of the state Capitol.