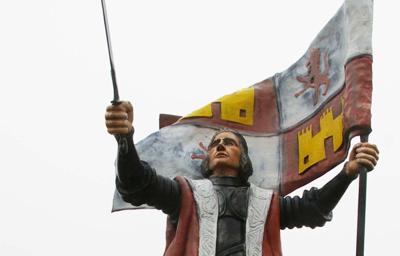 COLUMBUS — It’s time for the city of Columbus to take down the Christopher Columbus statue standing sentinel in the unmowed strip of grass behind the shuttered Shopko Hometown store on the western edge of town.

The fiberglass monument was erected in the city about 30 miles northeast of Madison in the late 1980s by well-meaning people with sincere pride in the city’s namesake. But times have changed, and with it, our understanding of the man who, for generations, our third-grade teachers told us was a conquering hero.

In light of our more nuanced understanding of the man, people have begun looking at the statues that pay homage to him in a new light. And with the wider acknowledgement of systemic racism that has come in the wake of the George Floyd killing at the knee of a white police officer, many are not willing to wait any longer for city or state governments to take action. In the last week alone, protests have targeted similar statues in Boston, St. Paul, Minnesota, and Richmond, Virginia.

Let’s not let our statue be the last Christopher Columbus standing. I implore the Columbus City Council to take action now to remove the local monument.

Columbus’ stature as a great man was built on the myth that he discovered America. The reality is millions of people already lived in the Americas and were well aware of its existence long before Columbus accidentally arrived here on his quest to find a shorter route to the West Indies (as China, Japan and India were referred to by Europeans at the time). Once here — or more accurately, once in the Caribbean because Columbus never set foot in North America — he and his crew captured, killed and enslaved many of the natives — the people he called “Indians” because he believed he had reached the Indian Ocean.

Furthermore, Columbus’ four voyages to the Caribbean and Central and South America set off centuries of colonialism that systematically subjugated the native peoples and economically exploited their lands while introducing diseases such as smallpox and the measles. The natives had no immunity to these diseases, which ultimately led to the deaths of many of them.

On the island of Hispaniola alone, Columbus forced thousands of Taino “Indians” to search for gold and work on plantations. The less fortunate were rounded up and sent to Spain to be sold as slaves. (Many didn’t survive the journey.) Meanwhile, the population of Taino people withered due to disease, deprivation and brutal treatment at the hands of their Spanish captors until they were all but extinct.

This man’s face should not be the first thing people see when they visit our town. Our current city council may not have played a role in putting the statue up, but it is in their power to take it down. For the sake of oppressed minorities around the world, from the Taino people to the late George Floyd, I ask them to do so.

Cestkowski is a longtime Columbus resident and former editor of the Columbus Journal who worked for the Wisconsin State Journal.

Karen Weber-Mendham won a million dollars in the 2013 Lay’s Potato Chips “Do Us A Flavor” contest. Yet from my perspective, her life hasn’t ch…

Jesus said, “Whoever welcomes a prophet in the name of a prophet will receive a prophet’s reward.”

LANDERS: Camping? No thanks

We’ve all been there. A friend or a group of friend approaches us and says, “We are going camping, you should come with.”

Social media has given everyone with an opinion the power of both anonymity and number.