A New Year's resolution for Assembly Republicans: Get rid of Speaker Robin Vos
0 Comments
Share this 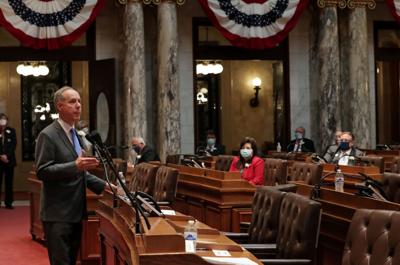 The longest-serving Assembly speaker in Wisconsin history has clung to power for nearly a decade, becoming increasingly stubborn and unproductive. The Assembly needs a fresh voice with more optimism and better priorities than Speaker Robin Vos.

As the new year begins, Assembly Republicans should resolve to make 2022 Vos’ last as a legislative leader. GOP lawmakers should pick someone else for this important position.

Vos has represented parts of Racine County in the Legislature for 17 years and previously worked as a legislative aide. That means he was enmeshed in partisan politics long before he sought election — and it shows. Vos has become entrenched, constantly picking political fights and increasingly fond of wasting public money.

Not unlike Illinois’ longest-serving speaker, Democrat Mike Madigan, Vos has lost his way and worn out his welcome. He needs to go.

Republicans are supposed to favor careful stewardship of tax dollars. Instead, mirroring his party’s litigious and free-spending former President Donald Trump, Vos is blowing close to a million dollars on a redundant, meandering and ham-handed investigation of the 2020 presidential election. He’s wasted millions more on high-priced attorneys defending his partisan gerrymandering. Vos has even refused to allow a public hearing on Iowa’s proven nonpartisan redistricting model, which enjoys bipartisan support across Wisconsin and in the Legislature.

Vos’ curt response to public information requests about his spending of public money has prompted lawsuits, and he’ll soon be forced to answer to a judge. Worse than that, Vos was behind the witless attempt to neuter Wisconsin’s open records law in 2015. He has constantly looked for ways to undermine transparency in favor of big-government secrecy.

Madison School District earns an ‘A,’ an ‘F,’ an incomplete and a tardy

Vos loves the limelight, riding in Trump’s private jet and trying to upstage the governor at the governor’s State of the State address last year. More recently, he called for an elections administrator to resign — even though it was Vos’ own appointee (and a former GOP lawmaker) who voted for the decision Vos belatedly disliked.

With Vos in charge of the Assembly, every small health precaution during the pandemic has become a battle, pitting neighbors and communities against one another.

That’s why a change at the top is needed.

Some GOP lawmakers may scoff at the suggestion Vos needs to go. After all, the speaker has prioritized — above all else — keeping Republicans in power. Many of his colleagues owe their seats to Vos’ fierce defense of partisan gerrymandering.

But those members — and their constituents — should prioritize better public service and results instead. Vos is supposed to work for the people, not his party, the former president or special interests. Vos is in bad need of a permanent vacation from his powerful perch.

Assembly Republicans have plenty of choices for a new speaker among their 60 other members. They should pick someone in the coming year to move past Vos’ stale approach.

Madison School District earns an ‘A,’ an ‘F,’ an incomplete and a tardy