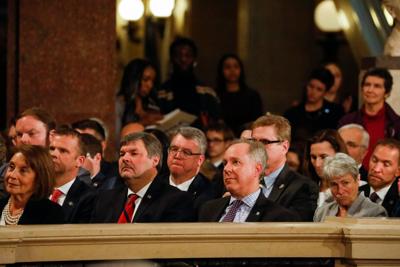 Here’s some simple advice for the state Legislature, whose members were sworn into office last week: Represent the will of the people.

What does that mean? When the public overwhelmingly supports a policy decision, get it done.

We the people of Wisconsin actually agree on a lot.

Lawmakers should listen. They should get rid of Wisconsin’s ancient law forbidding abortion in virtually all cases, including rape and incest. Approved in 1849 — before women had the right to vote — Wisconsin’s long-dormant law is now enforceable again, forcing women to travel to other states for the procedure.

Sing along to the year in politics

The Republican-run Legislature shouldn’t cling to a puritanical law that close to 9 out of 10 people oppose across Wisconsin. They should agree with Democratic Gov. Tony Evers that women deserve some freedom to choose.

That means the next state budget should increase state aid to local governments, because local governments run police and sheriff’s departments. The budget also should address drunken driving, which is on the rise.

Approving a paid-leave mandate would bring Wisconsin into the civilized world. Democrats have been supportive for years. Now Republicans are coming around.

Get it done to help more families thrive.

Evers and the Democrats are on board. Top Republican lawmakers last week were moving closer to accepting medical marijuana, which more than 80% of respondents have favored.

Just as the prohibition of alcohol didn’t work a century ago, neither has the ban on recreational marijuana. State lawmakers should respect the freedom of adults to safely use the mild drug, while working to prevent teen use and drugged driving.

That means the next state budget should include a solid increase for public K-12 education. It’s not just polling that shows the need for greater investment. Voters approved 64 of 81 school referendums in last fall’s election.

Why would the Republican-run Legislature disregard the will of the people in so many cases? The main reason is gerrymandering. They don’t have to fear voters because they’ve shaped their legislative districts to unfair advantage. While the two major parties collected similar numbers of votes statewide last fall, the Republican-controlled Legislature nonetheless maintained huge majorities of 64-35 in the Assembly and 21-11 in Senate.

Gerrymandering is the main reason why.

The Marquette poll asked voters about that, too, back in late 2021:

Lawmakers, please respect your constituents. Approve nonpartisan redistricting the way the Republicans in Iowa have done, with bipartisan backing. That’s the most important action of all.

Sing along to the year in politics