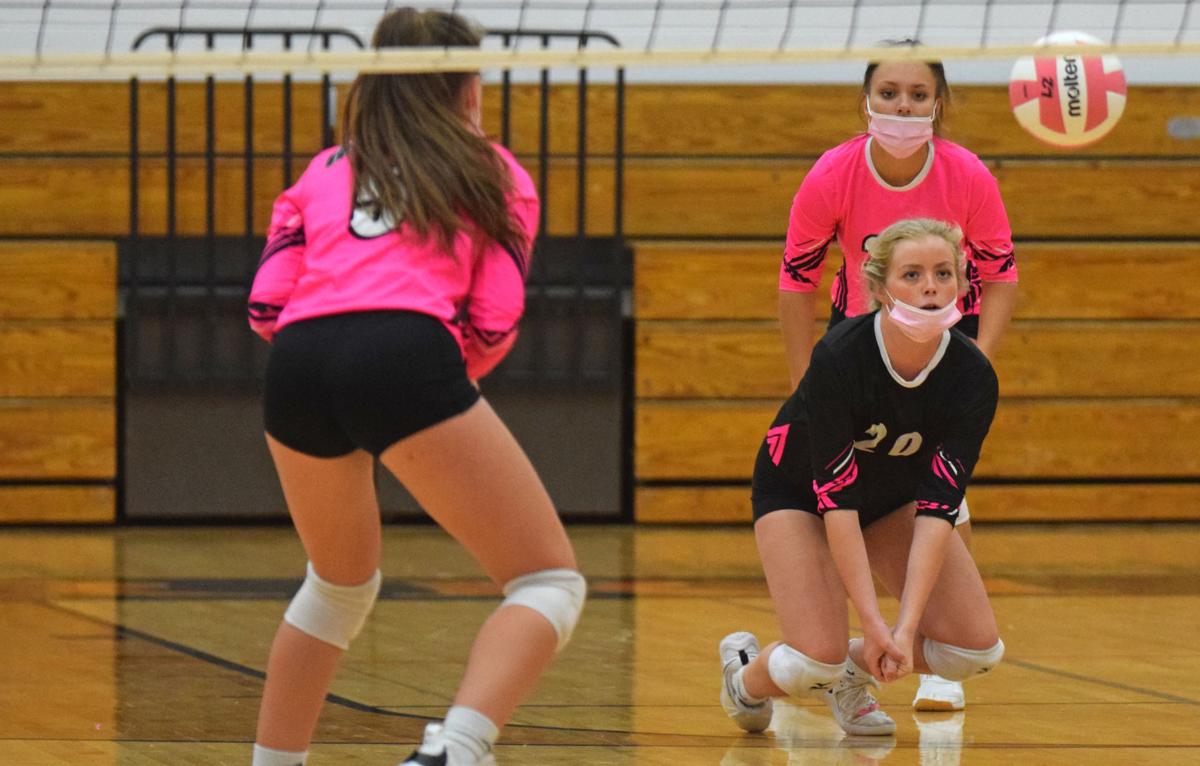 Portage senior Emma Colling dives after a serve as sophomore Estella Brees (5) looks on during Thursday's Badger West Conference match against Reedsburg at Portage High School. The rivalry tilt was the Warriors' Pink Out Night, the program's first with all fans allowed back in the stands since 2019. 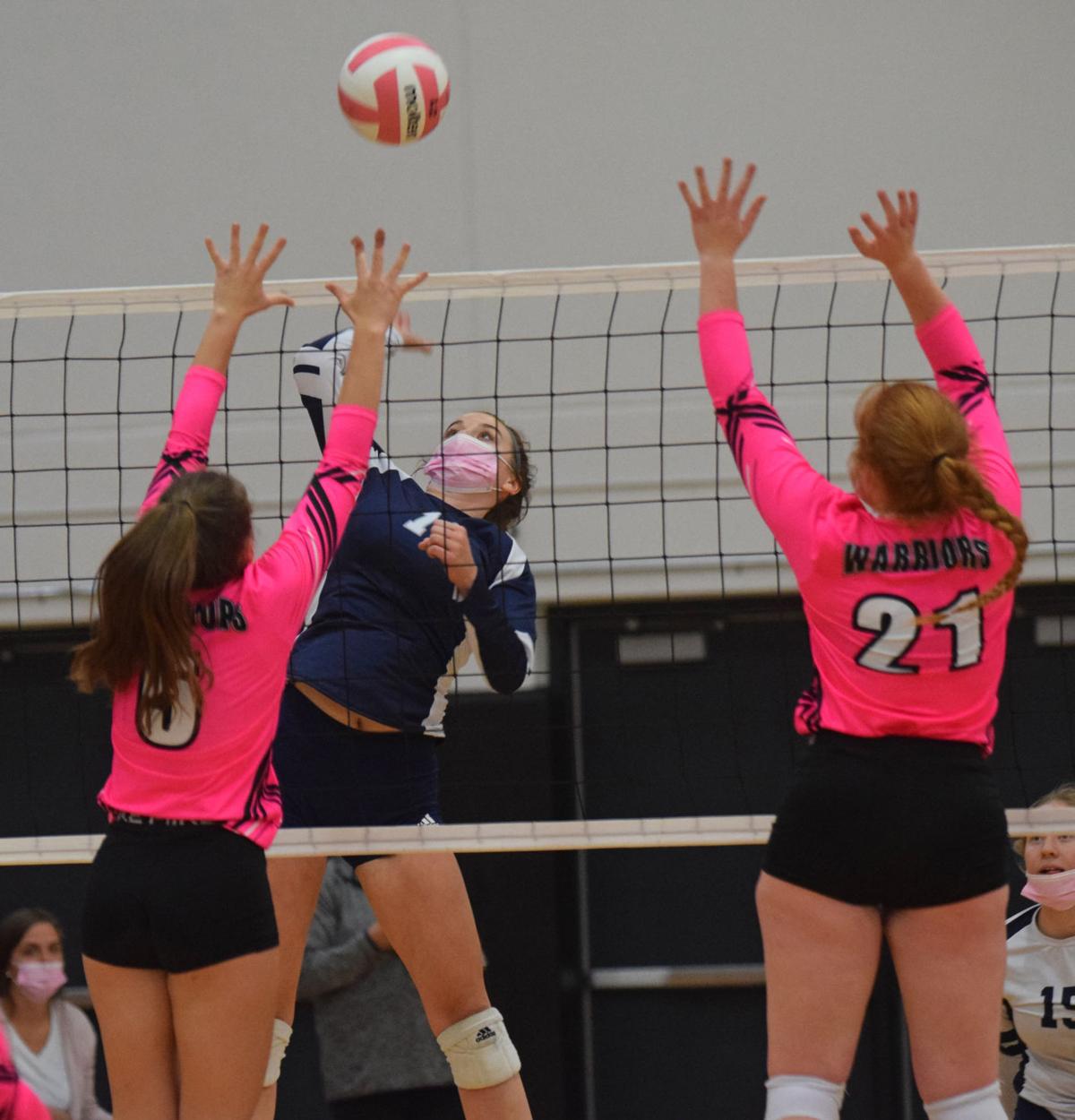 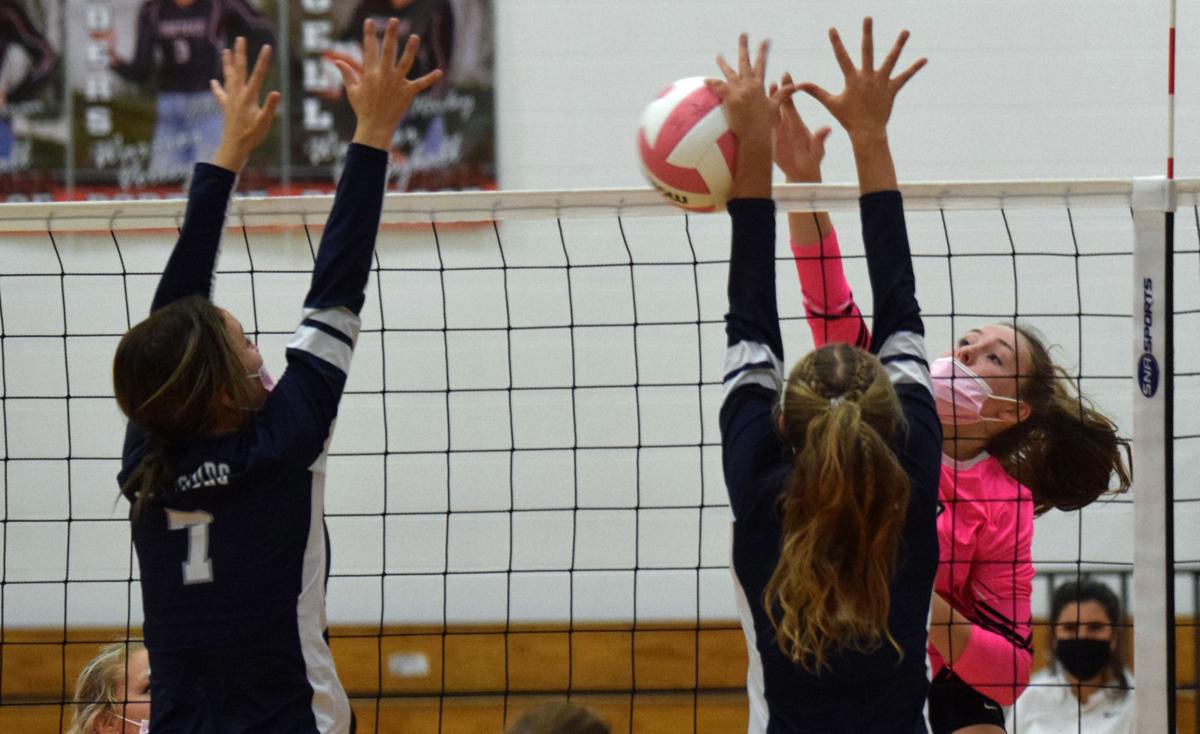 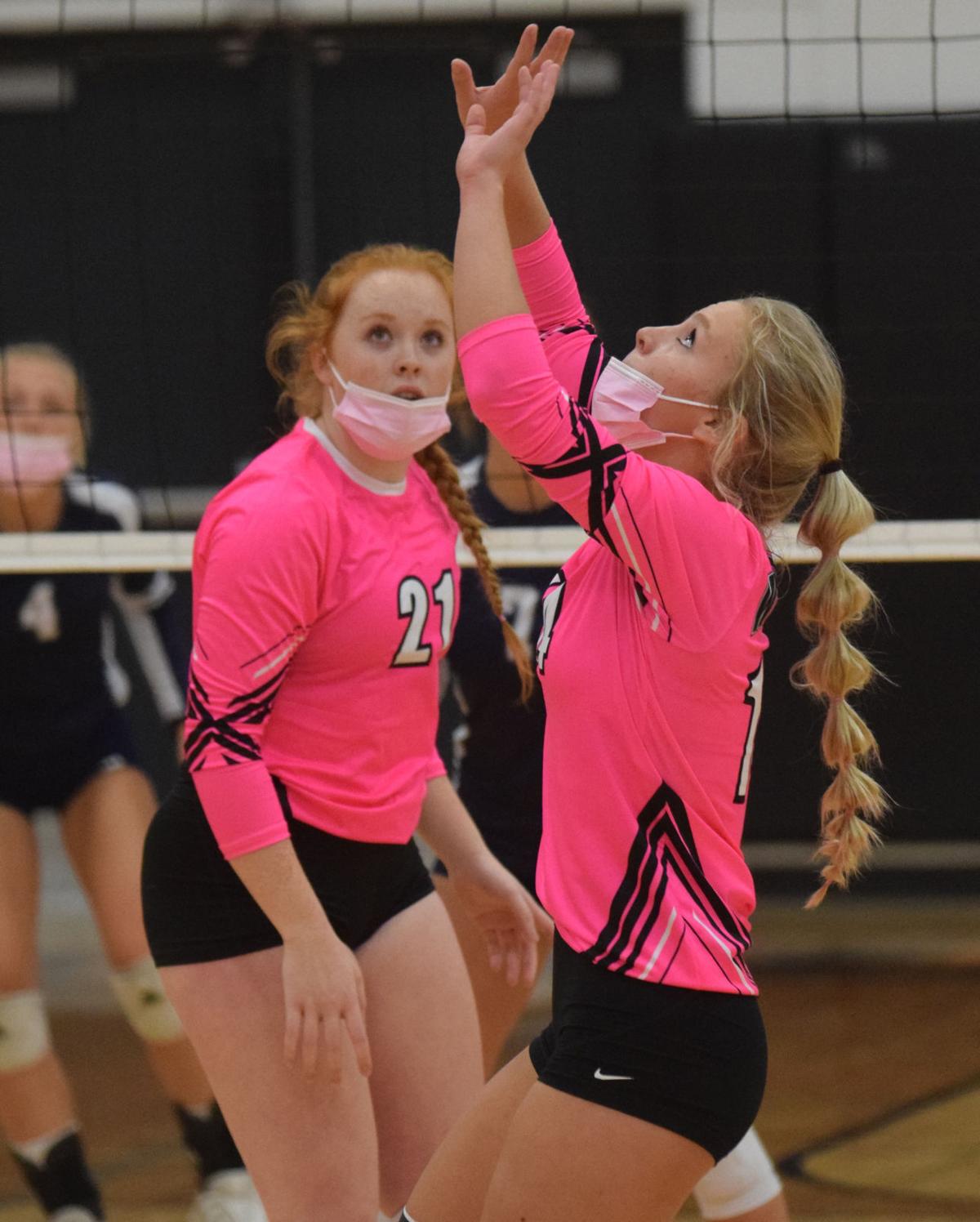 When a team gets on a roll, it usually can be pretty hard to spell the tide.

The Portage prep volleyball team found itself trying to keep its head above water too often Thursday night in a 25-9, 24-14, 25-16 loss at the hands of Reedsburg in a Badger West Conference match at Portage High School.

Senior Macie Wieman had 13 kills and 13 blocks, while senior Mahra Wieman tallied nine kills and 11 assists with a block apiece to help the Beavers sweep away the Warriors on their Pink Out Night.

“We’ve had a lot of conversations about talk and energy, and how they’re correlated with each other, and I think you see that when you watch us play,” Portage coach Kristin Maass said. “When their energy and their talk is really good, we play good, but when they start to feel like they’re losing it, they stop talking and it sort of goes out of control really fast.”

Things got out of control quickly in the first set as the Beavers broke free after a spirited start. The rivals traded punches over the opening moments with Reedsburg taking an early 9-7 lead following a 3-0 Portage mini-run.

The tide quickly turned from there though as the Beavers caught fire. Macie Wieman had a kill and a block as Reedsburg reeled off four straight points before forcing a Portage timeout. The Warriors got the serve back after a Reedsburg service error out of the pause, but the momentum dissipated as Reedsburg answered with 12-1 run to end the set.

That momentum carried over into the second set as Reedsburg opened on an 11-4 run, capped off by a Haylee Kast kill off the Warriors block. Portage found a bit of a groove from there, however and pulled within 21-13 off a kill and ace by sophomore Estella Brees, a block from senior Felicia Sanders and a dig kill by senior Sydni Kratz.

The Warriors didn’t get closer however, as the Beavers went on to pull away and capture the set, 25-14.

Portage had a hard time generating much offense, but it was the Beavers’ hitting that gave the Warriors as Reedsburg continually picked out the soft spots.

“They’re really good at finding those open spots, and we just didn’t move very well or read very well to defend that. It was a combination of both,” Maass said.

Needing a win to stay alive, the Warriors slumped out of the gates in the third as the Beavers opened on a 10-3 run. The lead grew to as many as 12 at 19-7 before the Warriors again got rolling. Portage answered with a 7-2 run, capped off by a Madison Maass ace, to pull within 21-14, but it couldn’t inch closer as the Beavers ultimately prevailed.

Brees had five kills, two aces and five digs to help lead the Warriors, while Kratz had seven assists and four digs. Despite the loss, Maass was pleased with the closing effort, and she’s hopeful it can fuel the Warriors off their recent run of success.

Following a pair of wins to close last Saturday's Iowa-Grant Invite, the Warriors swept Adams-Friendship in a non-conference tilt on Monday, 26-24, 25-19, 28-26. Portage will have another chance to add more wins on Saturday with a strong showing in its home quadrangular against the Beavers, Wisconsin Dells and Lodi.

“I think that should give us a lot of momentum heading in. They need to understand they’re capable of getting those wins and putting together a string of wins,” she said. “Hopefully we’ll take a little bit off of what happened here tonight, work on a few things tomorrow in practice and get ready for the weekend.”

Whether or not that happens, Maass is happy that the Warriors are getting a more ordinary experience this season. Following last fall with limited fans, fuller gyms, especially student sections, have been a welcome sight for the Warriors.

“I think that’s been nice the whole season where we’ve had full fans in and their peers have been able to come in and watch them. They’ve enjoyed that and I’d like to see that encourage them further and push them to want to perform in front of their friends and their home crowd,” Maass said.

“It’s just nice to have people that are always coming and supporting the girls, no matter what. And being able to play in that atmosphere. A lot of those seniors, even though they were on varsity last year, they’ve never had the experience of playing in front of home fans as a varsity player. So being able to give that to them in their senior year is really great.”

The Warriors rallied after dropping their first two matches to finish .500 on Saturday, while the Vikings dropped a pair of nail-biting three-set matches.

The Warriors struggled against the Crusaders height, while the Pioneers earned a big SCC win over Wisconsin Dells. The Vikings and Hilltoppers picked up non-conference victories.

Baraboo, Portage, Reedsburg and Sauk Prairie got a taste of what their regular season matches may be like thanks to the Badger Conference's realignment.

The Warriors shook three straight losses to close with a straight-sets win over Monroe.

Portage senior Emma Colling dives after a serve as sophomore Estella Brees (5) looks on during Thursday's Badger West Conference match against Reedsburg at Portage High School. The rivalry tilt was the Warriors' Pink Out Night, the program's first with all fans allowed back in the stands since 2019.