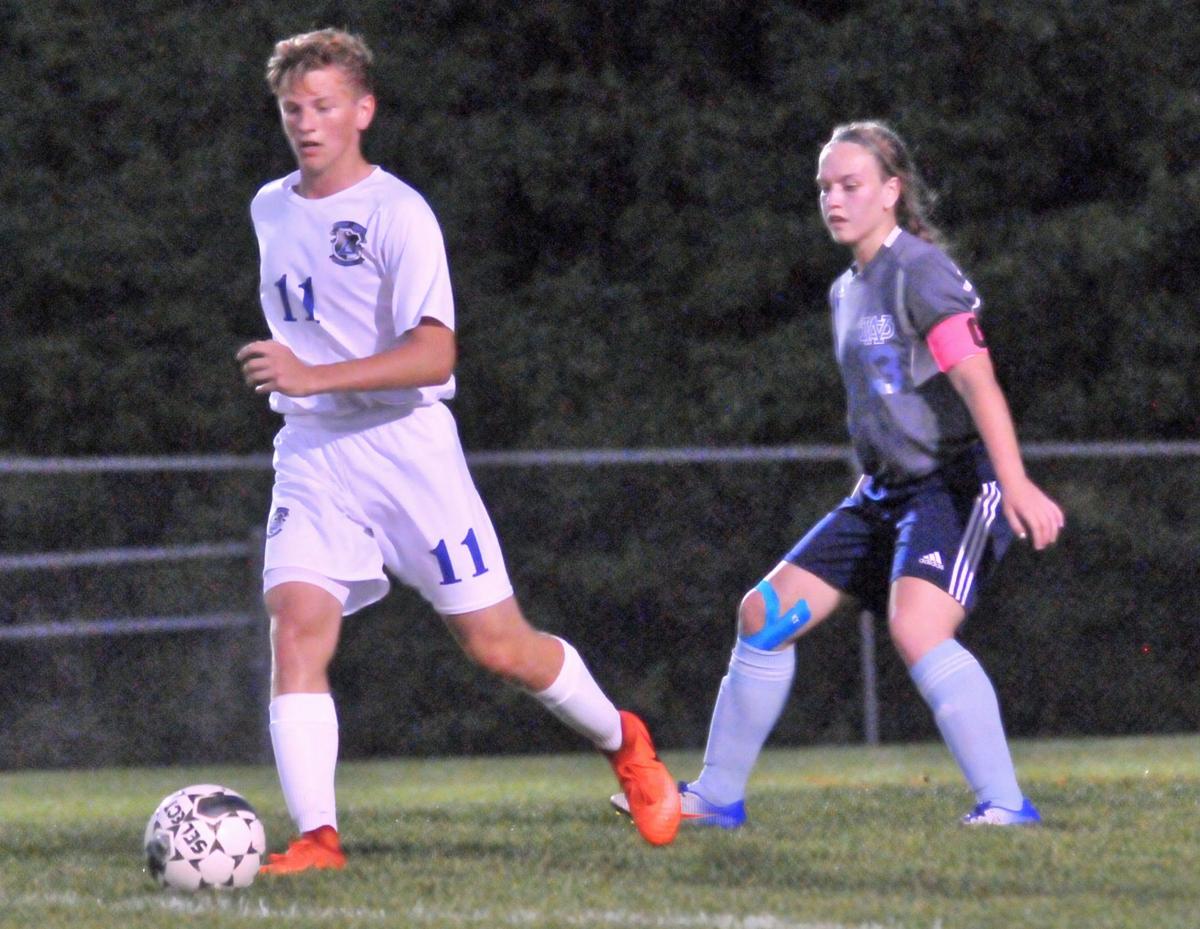 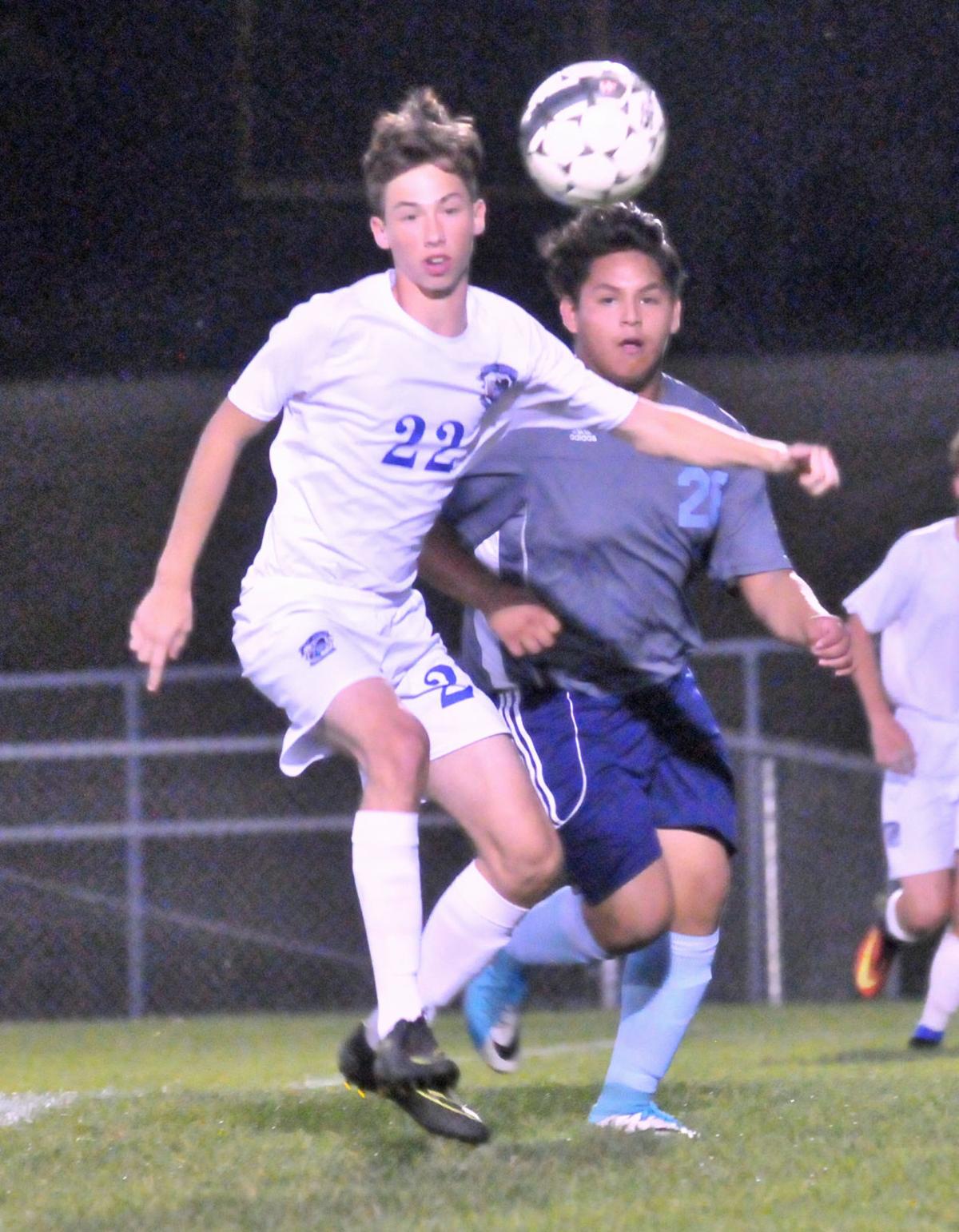 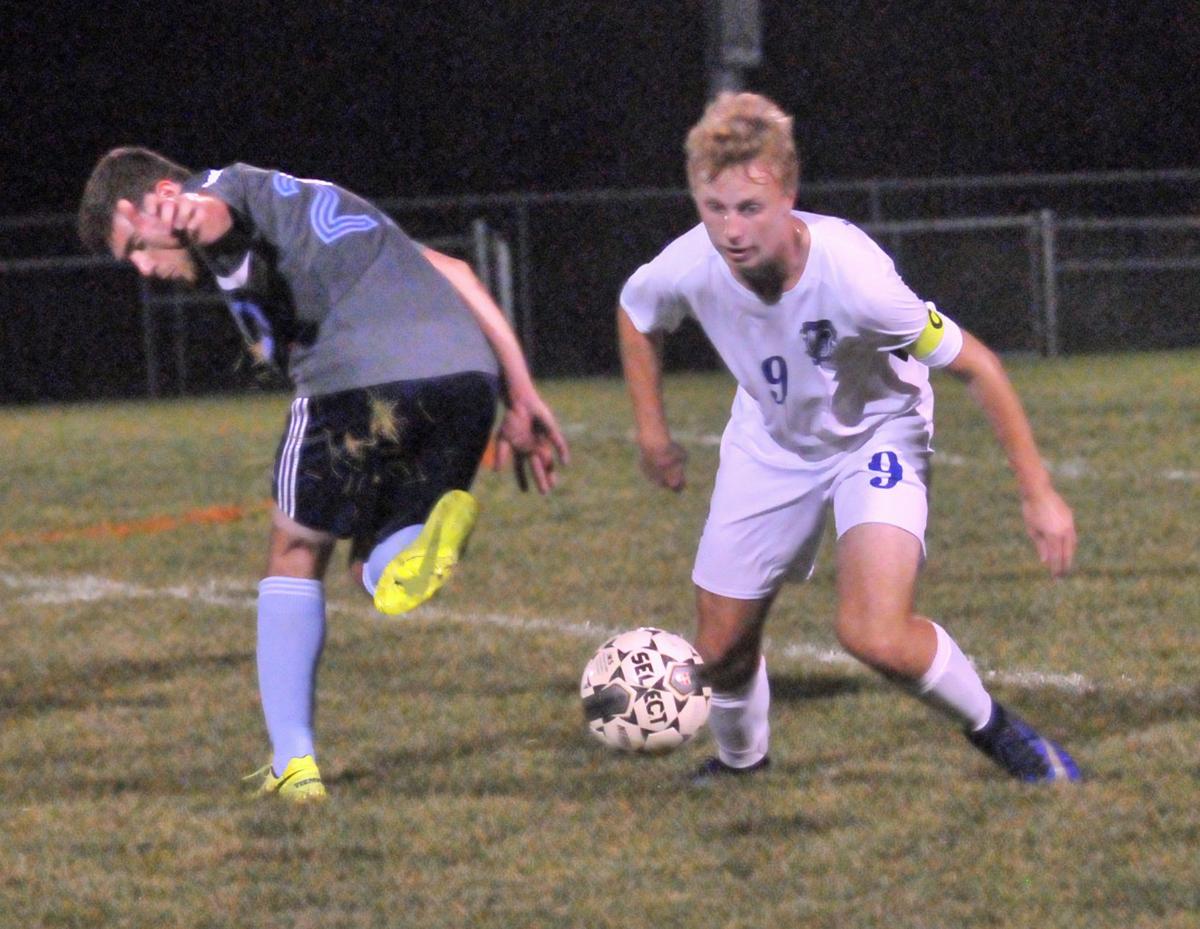 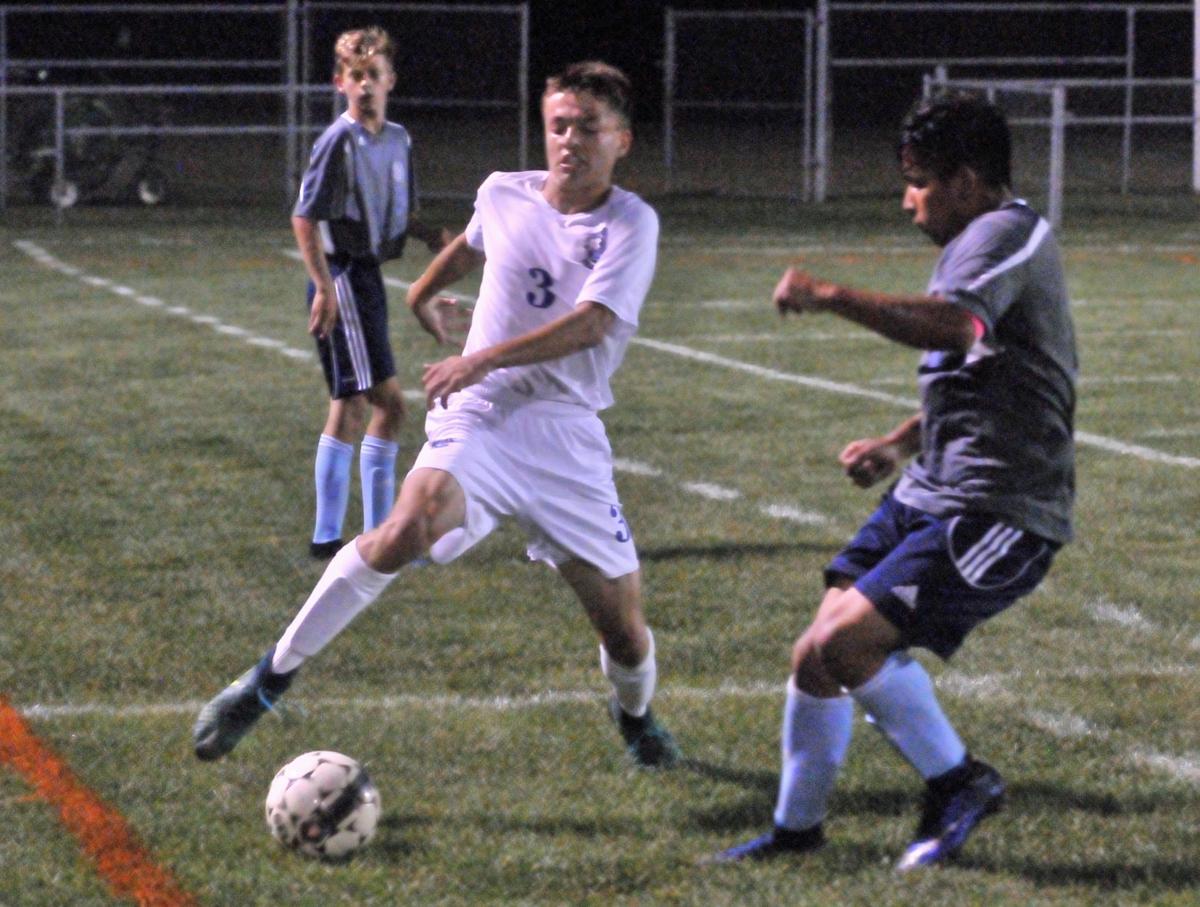 Lodi junior Jared Volk looks to keep the ball in bounds against the defense of Wisconsin Dells freshman Angel Jaramillo during the first half of Thursday night's Capitol Conference game at Lodi High School. 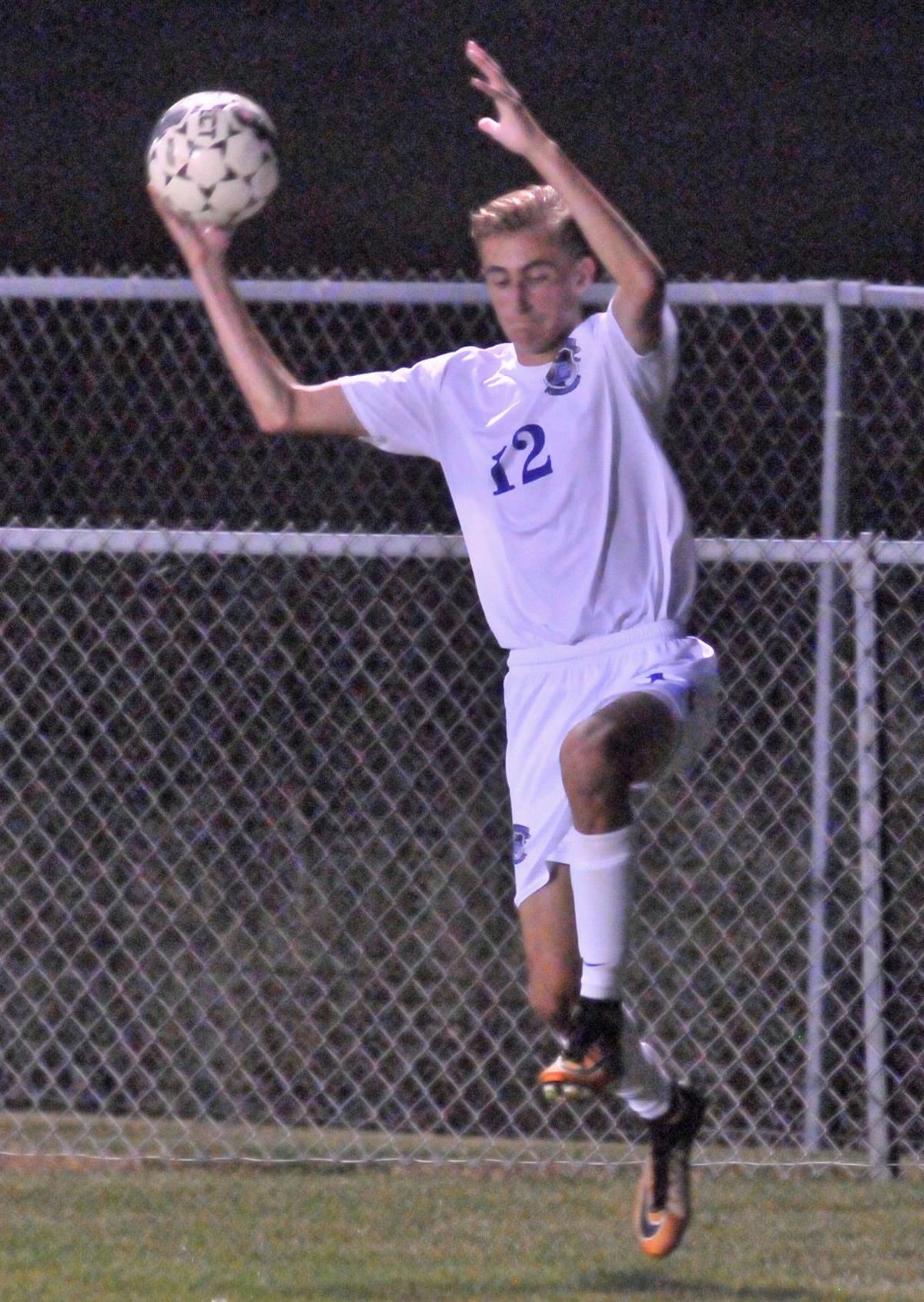 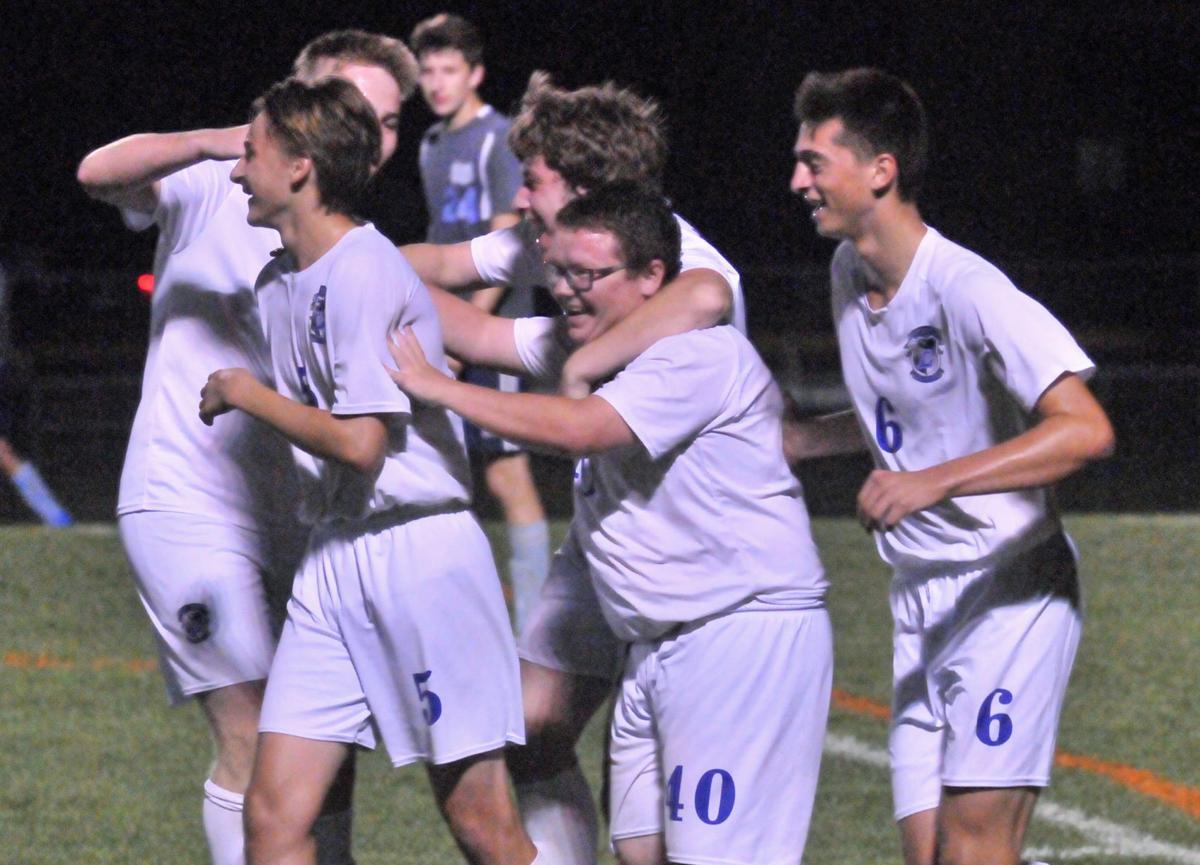 LODI — Speed can be a major difference maker in soccer, and the Lodi boys soccer team used its quickness to perfection Thursday night.

The Blue Devils utilized their speed to get on the end of through balls, burying home a 7-0 shutout win over Wisconsin Dells in a Capitol Conference game at Lodi High School. The win snaps a three-game winless streak for Lodi, who went winless at its host quad on Saturday and surrendered a late goal in a 1-1 draw against Lake Mills on Tuesday.

“It’s big for the guys,” Lodi assistant coach Zack Nelson said. “It’s been a tough week for us and that’s why I think we came out a little weak today, it stuck with us, but once we got that rust off, we started to have some fun again.”

Lodi started out strong, possessing a majority of the ball in the opening 10 minutes before slipping into a lull until the 25 minute mark. The Blue Devils (8-4-1, 4-1-1 Capitol) eventually snapped out of their funk and got on the board through a penalty kick by Zach McManamy.

The senior forward earned the spot kick and coolly put his shot in the right corner for a 1-0 lead with 27 minutes, 57 seconds played.

It didn’t take long for Lodi to add to its tally, netting a second goal by Max Geluk at 32:30. McManamy again started the play, taking a ball over the top and drawing out Wisconsin Dells sophomore goalkeeper Ben Fish.

Fish slid out for McManamy, who lost control inside the 18-yard box, but Geluk was on hand to gather the loose ball and put a shot home for a 2-0 lead.

Lodi added another goal just before the stroke of halftime, this time by junior Ian Vanderkooi from McManamy. The junior forward made a great run, weaving through Chiefs defenders before getting on the end of a through ball by McManamy and putting a shot past an outstretched Fish for a 3-0 lead at 39:24.

For Nelson, the addition of the second and third goals was key for the Blue Devils.

“It was relieving,” he said. “It was a breath of fresh air for our team because you could see we were getting a little more nervous and anxious, so it was nice they could play a little looser and have a little more fun.”

It sure showed in the second half, as the Blue Devils picked up right where they left off, notching four more goals in the final 45 minutes, including three in the first 20 minutes of the half.

Vanderkooi netted his second of the night at 49:04 off a through ball by Mitch Figi and later finished off his hat trick at 61:21 through another Figi assist. The junior midfielder drove down the right sideline and worked his way inside the 18-yard box before cutting back and feeding Vanderkooi who put a shot past Fish inside the near post.

“They play off each other’s quickness,” Nelson said on the pair. “They were able to find each other and play the ball right in front of them so they get better shots on the goal.”

McManamy added his second goal at the 65:25 mark before senior Jack Gundeck finished off the scoring with his first goal of the season at 71:30. For Nelson, the team’s ability to keep possession and finish shots in the second half was nice to see, but he knows they still have areas for improvement.

Lodi junior Jared Volk looks to keep the ball in bounds against the defense of Wisconsin Dells freshman Angel Jaramillo during the first half of Thursday night's Capitol Conference game at Lodi High School.