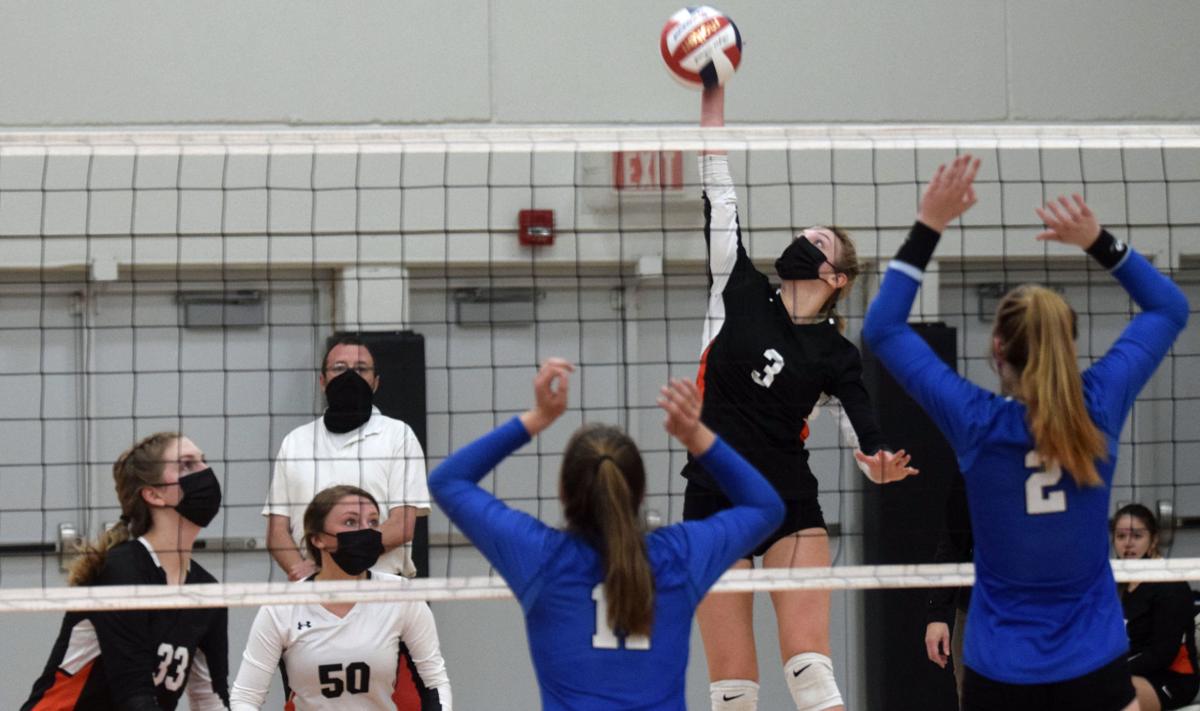 Poynette senior Peyton Kingsland goes for a kill during a Capitol Conference game against New Glarus on April 5. The Pumas have honed in on their attack this season and are on the cusp of a first-ever trip to the WIAA state tournament. 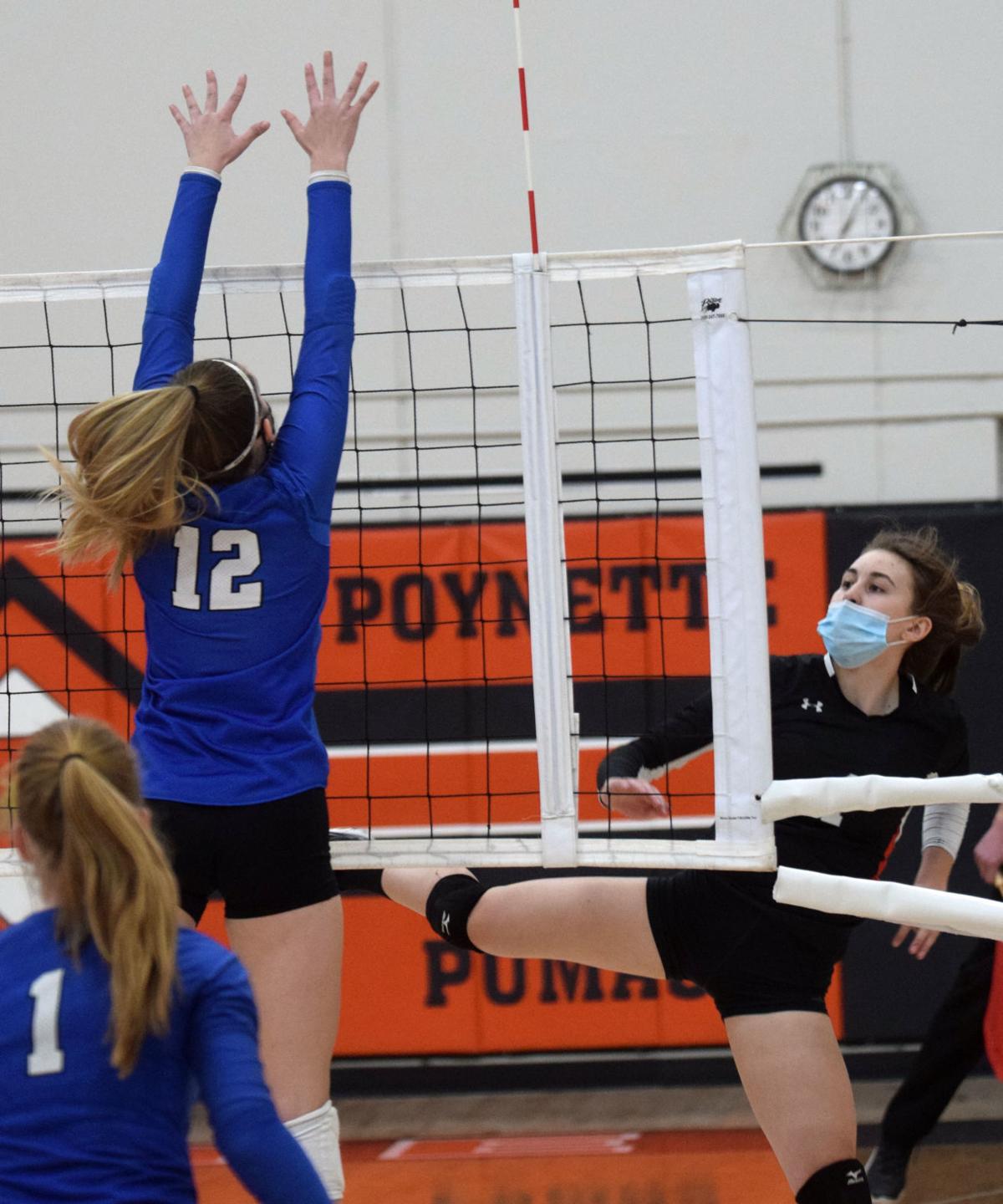 Poynette junior Rachel Yelk tries to hit past the block of New Glarus' Veronica Tollakson (12) during a Capitol Conference game on April 5. 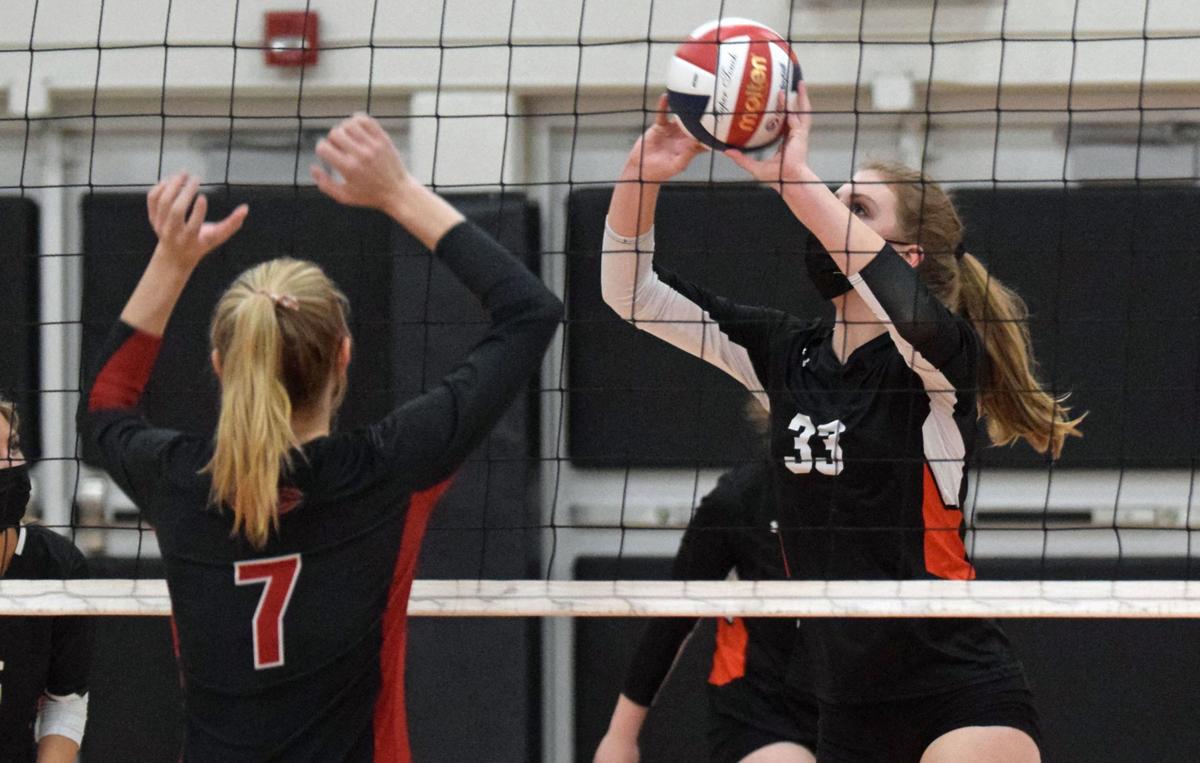 Poynette junior Leah Hutchinson goes for a push kill during a Capitol Conference game against Columbus on March 29. 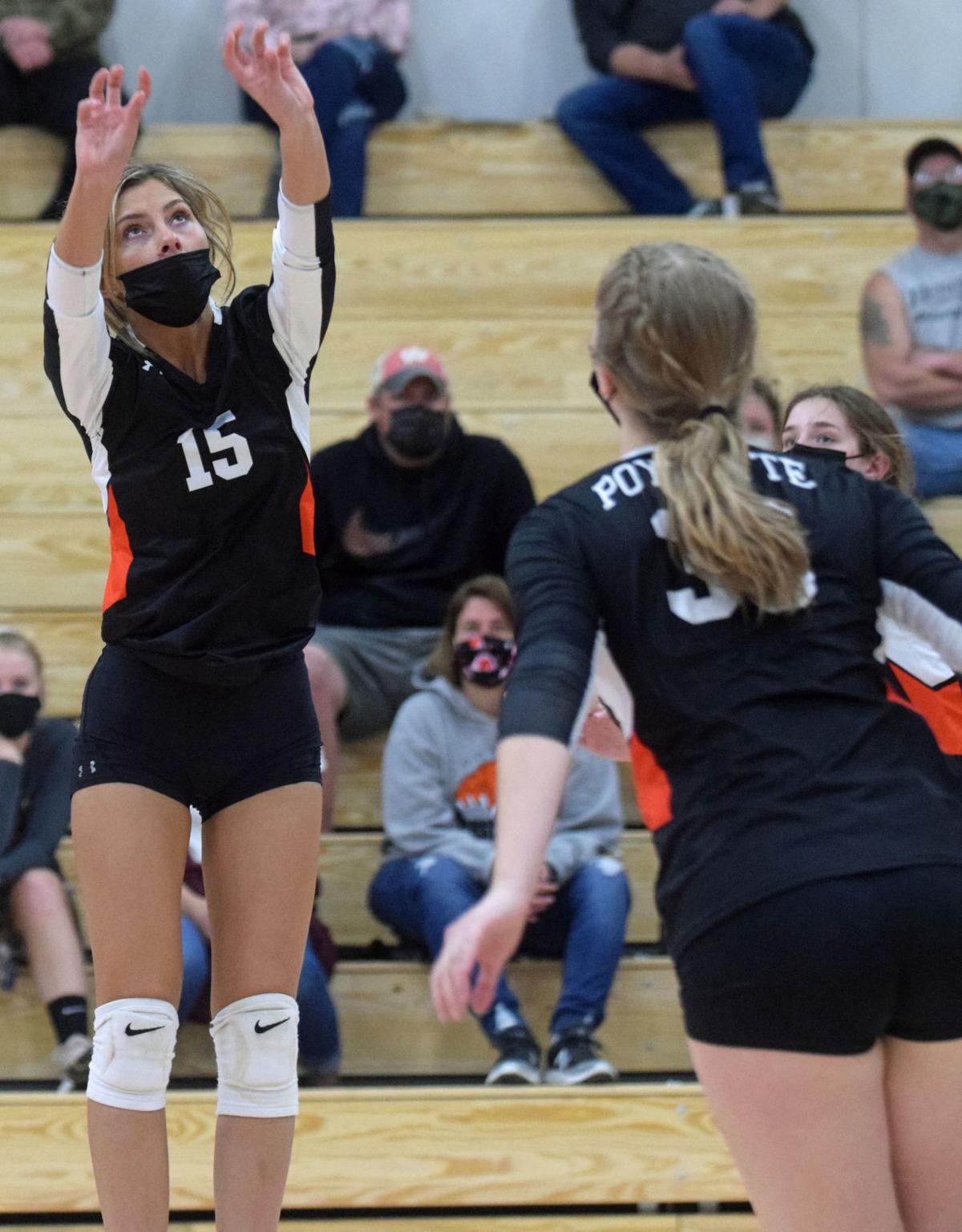 Poynette senior Jessica Bruchs makes a set for junior Leah Hutchinson during a Capitol Conference game against New Glarus on April 5. Bruchs and fellow setter, junior Emma Romack, have a bevy of hitters at their disposal.

A ball squarely hammered down into the court elicits a major roar from fans and the bench. It shouldn’t go understated, however, the importance of a pinpoint volley.

While not as flashy, finding the perfect position to place a shot in a weak defense plays just as crucial a role. It’s certainly paid dividends for the Poynette volleyball team this season as improved court awareness, among a litany of bolstered skills, has the Pumas eyeing their first-ever WIAA state tournament berth.

“It was amazing. We’ve worked really, really hard, especially this last week, and we know we didn’t want a short season and to end it,” Poynette junior Rachel Yelk said. “We wanted to keep it going as far as we can, so it was just really nice to see all that hard work pay off, and know that no matter what, we just have to keep fighting and we can make it in the end.”

The Pumas, who received the No. 4 seed and will face top-seeded Laconia in the WIAA Div. 2 alternate fall semifinals at 4 p.m. at Waupun CWC, are no strangers to fighting. Poynette finished the regular season at 6-6 overall and swept just one team — in its second-to-last game.

That trend carried over into last Saturday’s regional tournament. Poynette grinded out a four-set win over Wisconsin Heights, avenging a 3-0 loss to the Vanguards early in the season, in the semifinals before edging out a five-set win over Madison Abundant Life/St. Ambrose to capture the regional title.

There’s been plenty of contributions to the team’s growth, but in coach Janeen Hutchinson’s eyes, heightened intellect about the game itself has been imperative.

“I think the girls have raised their volleyball IQ; understanding placement of the ball is as important as how hard you hit the ball,” she said. “For them, raising that volleyball IQ just helped them understand what it’s going to take to win games.”

While their sharper understanding of the game has played a central role, realizing it all could end has been just as important according to Yelk. The outside hitter said the players have worn their emotions on their sleeves through a stretch of the season that’s included “some really hard practices.”

“We had some real heart-to-hearts like, ‘This could be our last game, every game from now on, so we really need to just leave it all out on the court,’” she said. “’Don’t question ourselves or doubt ourselves at all, know how we can play and just play our game.’”

Hutchinson has seen the team’s cohesion, chemistry and communication bloom this season in just the program’s second winning season in the past decade.

“With all of those factors, they’ve been able to put together a winning season,” she said.

It’s a feeling that Yelk said the group felt was possible leading into the spring campaign. While the team, comprised of six seniors, six juniors and two sophomores, was downtrodden after being relegated to the alternate fall season, Poynette’s certainly made the most of its new situation. The Pumas (8-6) are definitely playing as a whole heading into their sectional semifinal tilt with the Spartans, another constant that’s come out of this year.

“We all go out there and do it for each other; no single person wants to just do it for themselves, we all want to do it for all of our teammates and to see ourselves succeed as one big happy team,” Yelk said.

It isn’t just talk either, as Hutchinson has used a deep rotation behind the traditional starters. While Yelk and junior Leah Hutchinson lead the attack with 131 and 34 aces, as well as 106 kills and 20 blocks, respectively, Poynette goes deep.

Coupled with the starters, senior Alanna Borgen has been a regular and sophomore Hadley Walters has emerged in the postseason. Meanwhile, senior Kaitlyn Priske gave the Pumas a big lift out of the back row and sophomore Brooke Steinhorst filled in at setter during crucial junctures in Saturday’s regional.

“It’s really amazing. Some teams play their same thing every time, but it’s really nice for us when we’re struggling, in a tough rotation or the other team has a tough server, to be able to look at our girls on the bench and be able to sub any one of them in,” Yelk said.

“For them to be able to go just as hard as we are on the court, it’s really awesome to know we have that kind of backbone support.”

Poynette, which won a share of its first conference title since 1983, will need all hands on deck against a skilled Laconia side tonight. The Spartans went a perfect 10-0 in the regular season, including 9-0 to win the Flyway Conference, and racked up six of their seven sweeps to close out the regular season.

Laconia, which hasn’t dropped a set since March 18, kept things rolling with a 25-14, 25-10, 25-12 win over Montello to capture the regional title. As imposing as those numbers may be, Yelk knows anything is possible.

“We were seeded third and we ended up winning our regional,” she said. “I know we’re going up against the No. 1 seed Laconia, but at this point, rankings aren’t huge. We just have to go out and fight and do the best we can.”

Should the Pumas upset the unbeaten Spartans, they will meet either Columbus or Brodhead in the sectional final at 7 p.m. The No. 3 Cardinals (12-4) are no stranger to the Pumas, as the foes split their two regular-season meetings.

Columbus boasts a bevy of weapons, with six players with 50 or more kills and more than 100 digs, as well as four players with 20-plus service aces. Second-seeded Brodhead (9-3) has plenty of young firepower as its top-three kill leaders are all sophomores, led by Abbie Dix’s 178.

Dix also leads with 134 digs and 342 blocks, while sophomore Alexis Kammerer provides a great second punch with a team-high 381 assists, 121 digs, 39 kills and 27 aces. Regardless of the final results, Janeen Hutchinson sees reaching the sectional as a major success — and as a potential look at things to come this fall.

“I think this just shows the program is, hopefully, headed in the right direction,” she said. “We’ve had some great leadership with these girls and we hope to continue that right into the fall.”

COLUMBUS — The Columbus High School volleyball team got its opportunity this spring.

The alternate fall season was a breakout campaign for the Poynette volleyball team.

Poynette senior Peyton Kingsland goes for a kill during a Capitol Conference game against New Glarus on April 5. The Pumas have honed in on their attack this season and are on the cusp of a first-ever trip to the WIAA state tournament.

Poynette junior Rachel Yelk tries to hit past the block of New Glarus' Veronica Tollakson (12) during a Capitol Conference game on April 5.

Poynette junior Leah Hutchinson goes for a push kill during a Capitol Conference game against Columbus on March 29.

Poynette senior Jessica Bruchs makes a set for junior Leah Hutchinson during a Capitol Conference game against New Glarus on April 5. Bruchs and fellow setter, junior Emma Romack, have a bevy of hitters at their disposal.