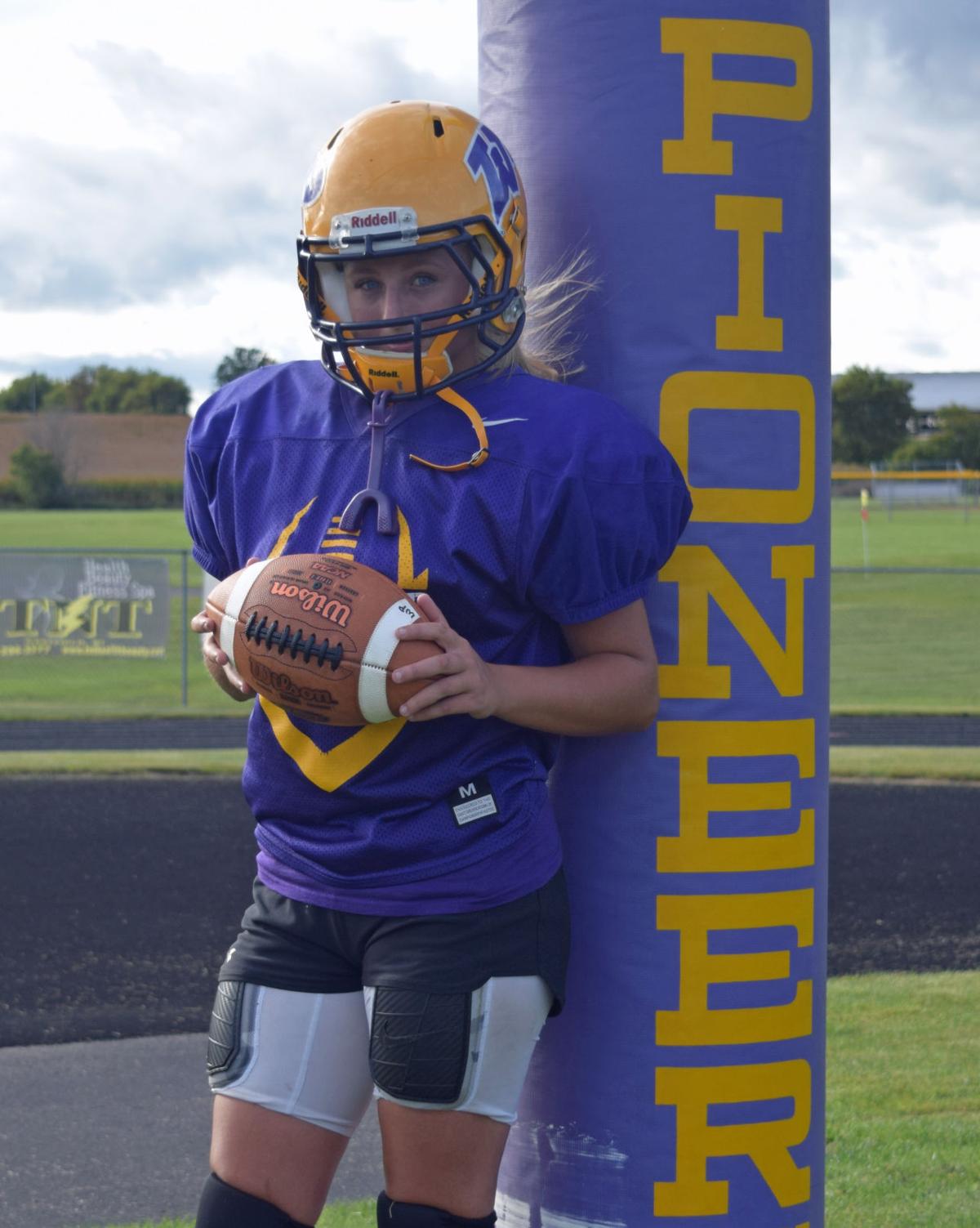 Westfield's Kimmy Sengbusch poses for a photo against the goalposts at Westfield Area High School during Tuesday's practice. With the Pioneers in need of numbers, the senior took up kicking field goals this summer to help ensure her classmates have a final season this fall. 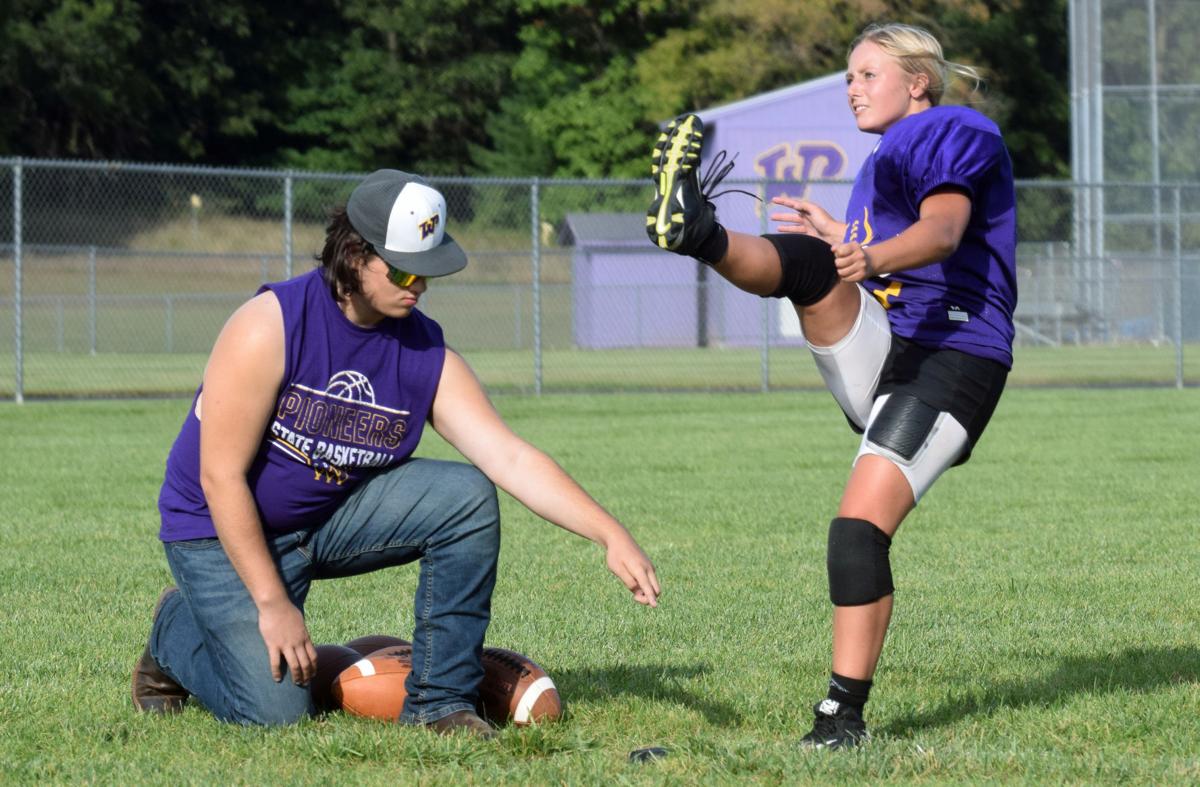 Westfield senior Kimmy Sengbusch sends a kick towards the uprights during Tuesday's practice. Working alongside Middle School coach Dakota Draheim, Sengbusch has seen a massive improvement in her kicking skills in just a matter of months. 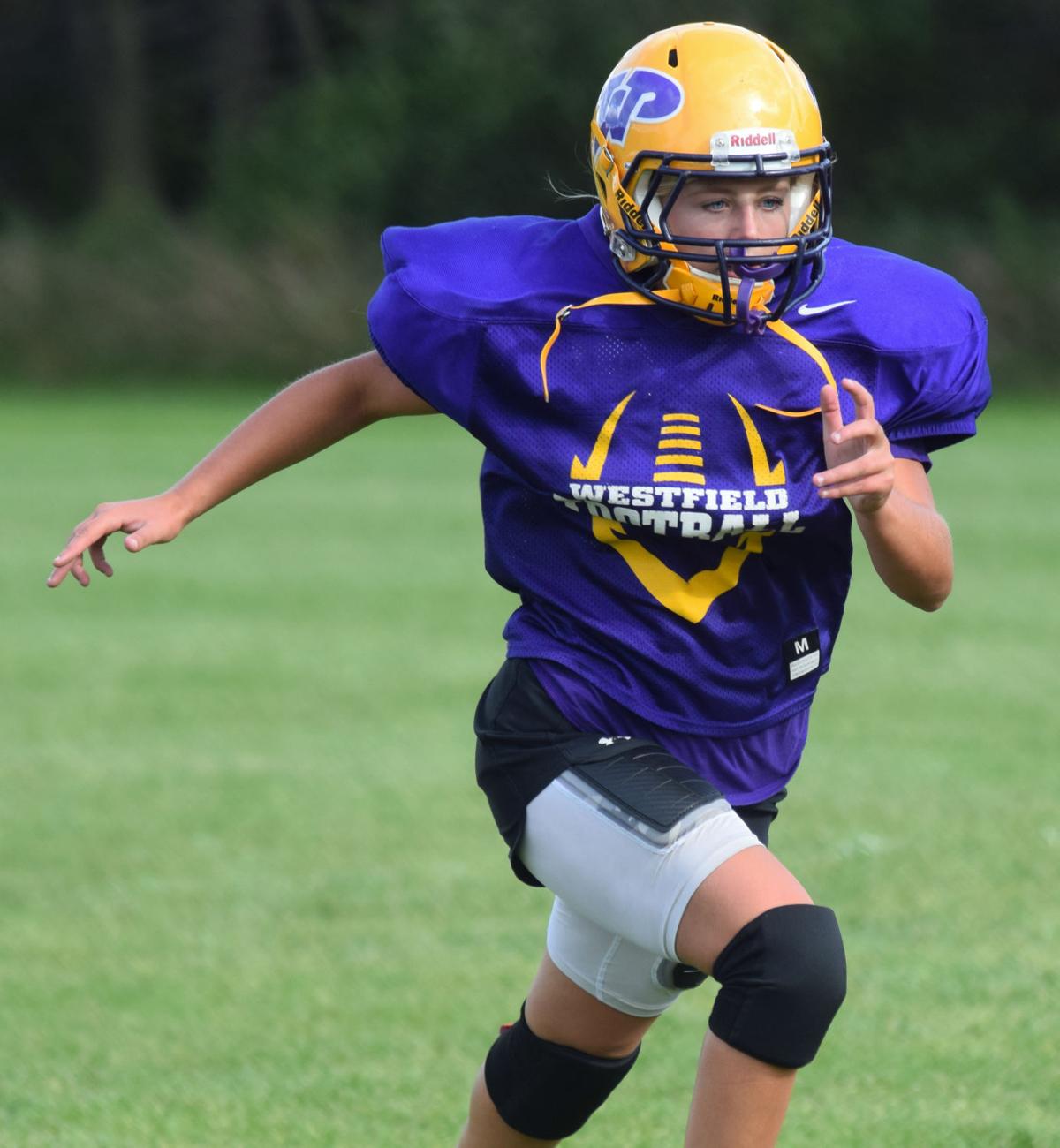 Westfield senior Kimmy Sengbusch sprints towards the goal line during the Pioneers' warm-ups on Tuesday. 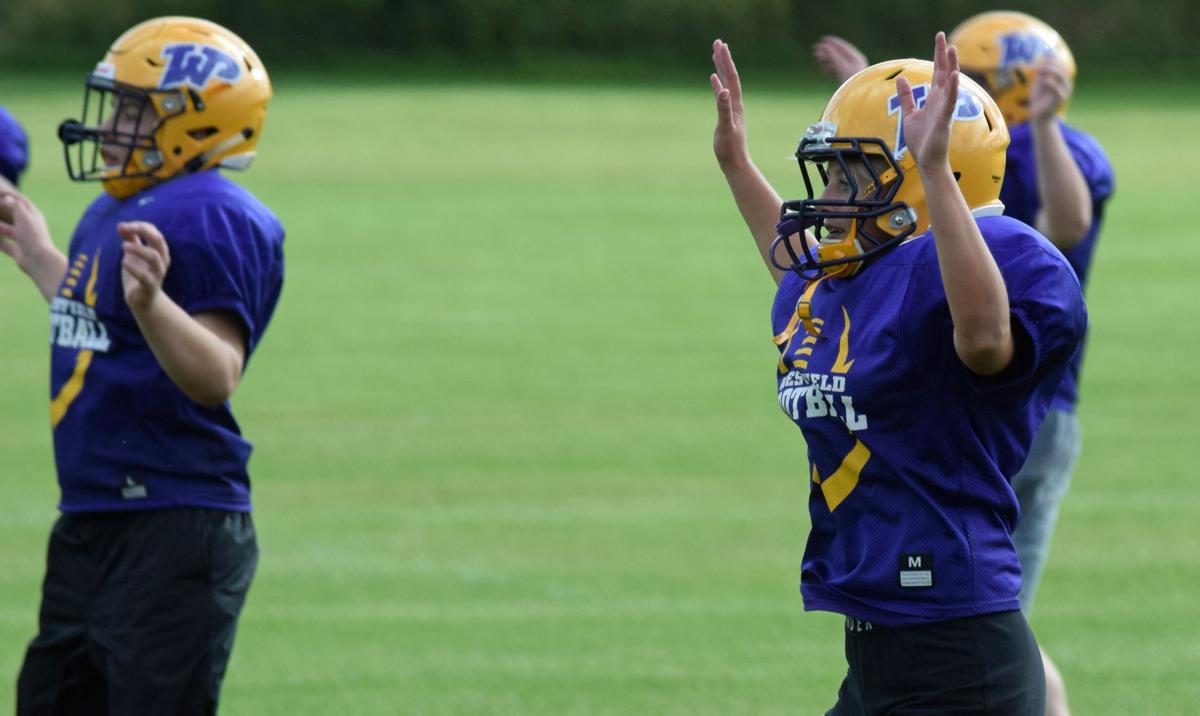 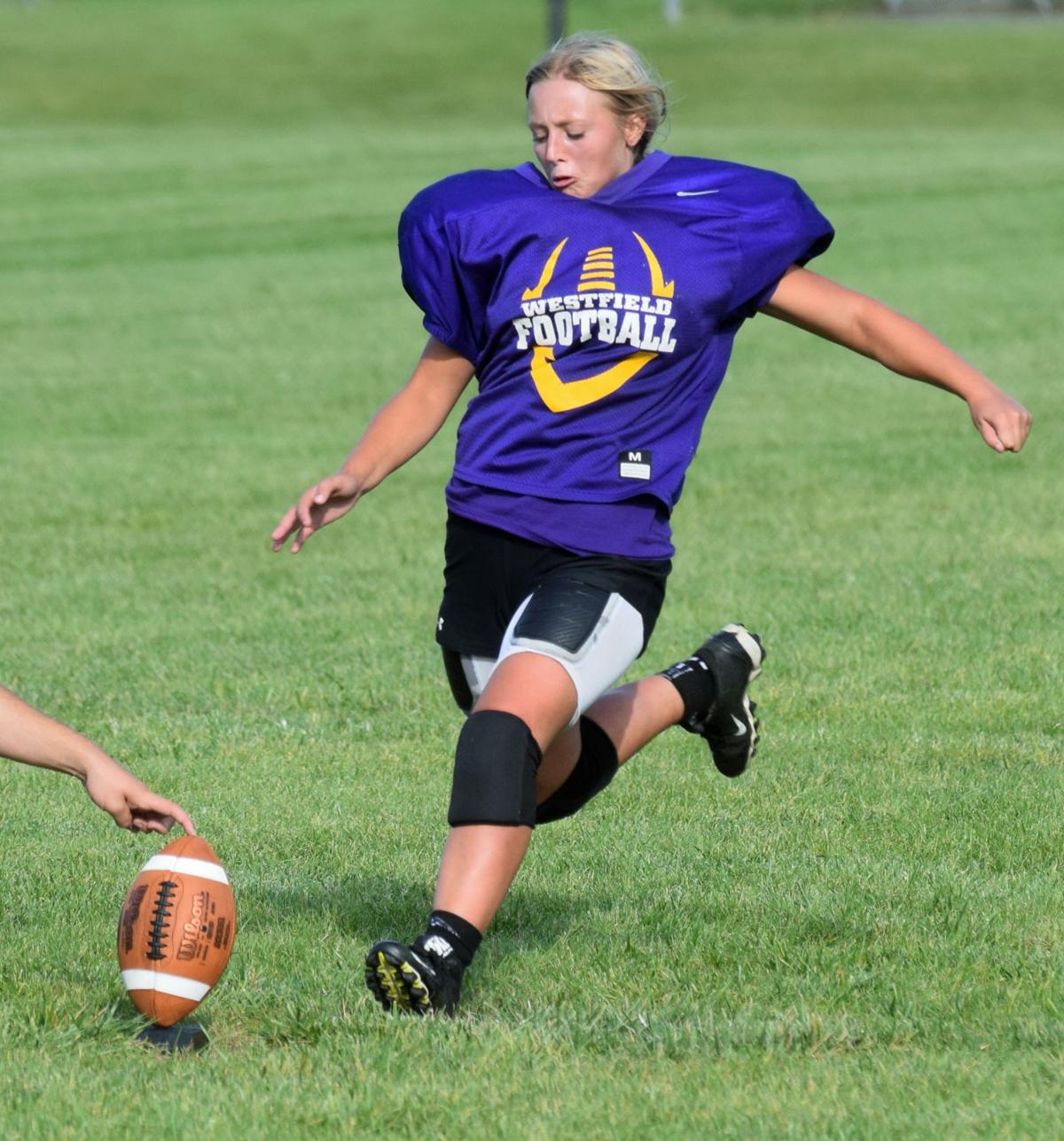 Sengbusch said she had trouble getting height under the ball initially, but after months of hard work, she's truly honed her consistency. "It’s been very nice to see her transition from starting to where she is now; she’s progressed a lot," Westfield Middle School football coach Dakota Draheim said.

It’s pretty well documented the struggles with numbers the Westfield football team has had in recent years.

Just five years ago the Pioneers failed to play a single game, canceling their entire varsity season due to a majority of the team being underclassmen. Two years later the program played the first five games of the 2019 season, but due to injuries, already compounded by low numbers, Westfield forfeited the final four games of that year.

With the Pioneers facing a similar situation this fall, Kimmy Sengbusch didn’t want her senior classmates to go through what previous teams had to deal with.

Looking at joining a fall sport this fall after stepping away last year following two seasons of volleyball, Sengbusch set her sights on the football team, and in particular kicking, despite never having kicked a football or played soccer before.

“I really didn’t see it as being a boy or girl kicker on a team, I kind of just saw it as an athlete that was able to do it,” said Sengbusch, who also is a member of the Pioneers girls basketball and softball teams.

“So I thought I’d come out and be a number on the team, so guys like Hunter Goodwin and Jack Marotz could have their senior year and not have the threat of numbers being an issue. I thought I could help out so I wanted to learn that skill to help the team out.”

“I was just trying to put myself in their shoes like ‘What if someone did that to me?’ My favorite sport is softball and if I didn’t have a senior season, that’d really take a toll on my year.”

While Sengbusch hasn’t had the chance to truly do so just yet, kicking just field goals as she plans to play college softball at Madison College after graduating this upcoming spring, she’s certainly honed a new skill in a matter of months that even the most uber athletic players struggle with.

“It’s different sports and different skill sets, but she does everything you ask her to do and I think she’s enjoying it,” said Westfield coach Kirk Kangas, who serves as an assistant coach on the Pioneers girls basketball team.

Sengbusch’s drive to start kicking was initially sparked by the desire to participate in a fall sport again. After sitting out last fall, Sengbusch said that “not playing a sport made me miss playing a sport (in the fall) because I’m an athlete.”

And with that she began working on kicking alone. Sengbusch said she lacked consistency at first, but she quickly started to find a groove after getting some help from Middle School football coach Dakota Draheim.

Draheim, a 2015 Cambria-Friesland graduate, played four years for the Hilltoppers but never kicked under head coach Jim Bylsma. But after graduating, got the chance to join the coaching staff for Beaver Dam Wayland’s football team and served as the Big Red’s special teams coach.

“I dove into tons and tons of videos, and really just immersed myself into kicking, the footwork and the timing of everything,” Draheim said.

After spending a number of years with the Big Red, Draheim later joined the staff at Amherst during his senior year at UW-Stevens Point. Again he took over as special teams coach and helped guide Mason Czech, the goalkeeper on the Falcons boys soccer team, to the All-CWC Large Conference first team.

Czech had never kicked a football before but was a natural, converting 48-of-49 extra points with the lone miss getting blocked, and making 3-of-4 field goal attempts. Two years later, Sengbusch has followed a similar path in harnessing the craft.

Draheim certainly saw the potential there when he first Sengbusch practicing on her own.

“You could tell she had the ability to do it, she just needed a little bit of coaching on it and she would eventually get really good,” He said. “She went from kind of being all over the place, to now when I’m with my middle school football players, I look over a see her at varsity practice kicking 10-15 balls (in-a-row) and most of them are going through the uprights.”

It’s been a gradual build however.

Sengbusch said that when she started she “struggled with kicking too much of a line drive.” Draheim attributes those lower kicks to Sengbusch’s early propensity for lifting her head after immediately kicking the ball. And while her steps weren’t the most clean to start either, he said Sengbusch was open to any and all criticism.

“Whenever I’ve had a tip for her or she tried something and it didn’t work, she was very quick to say ‘That didn’t work, but let’s try the next best thing and see if it that works,’” he said. “Eventually it got to the point where she has her rhythm now and I’m fairly confident that ball is going to go through when she gets her foot on it.”

“It’s been very nice to see her transition from starting to where she is now; she’s progressed a lot.”

For Sengbusch, seeing where she came from to where she is now has been really inspiring.

“It took a lot of work because I wasn’t really consistent at first, but now at practice I spend the entire practice kicking, so I’ll kick 70 balls in practice and I’m getting more consistent,” she said. “I guess something that that’s helped me is perseverance; not being as good and then working at it.”

After improving her skillset, Sengbusch’s next task was informing her potential new coach. According to Kangas, Sengbusch approached him about kicking during a summer league basketball game at Just A game Fieldhouse in Wisconsin Dells.

“She came up to me and made me promise not to laugh at here, but she said she wanted to come and be our kicker,” Kangas said. “I said ‘Are you seniors?’ and she said ‘Yes.’ I said ‘I’ll give you a shot,’ and that’s how it started.”

While she mostly spends her practice time kicking by herself, Sengbusch participates in all the team’s warm-up drills and fills in on scout team offense or defense when the Pioneers need extra bodies. Sengbusch said that being able to play scout team has been “super fun,” with her main just being a sponge.

“I just try to learn as much as I can in case someone gets hurt and I have to get put in,” she said.

It’s not one bit surprising to Kangas.

“She’s been outstanding, but I knew that from basketball,” he said.

But even more than being another number on an already thin roster, Kangas said Sengbusch has really meshed well with the group.

“She’s been nothing but positive for the team; the team likes her and she held a team bonding thing where they all went to Arby’s or something like that. She’s just such a pleasant girl to be around,” he said.

“Her camaraderie she brings is great. She fits right in and she’s got that tomboy in her.”

That “tomboy in her” isn’t limited to the football field. Being a three-sport athlete, Sengbusch said she’s a frequent fixture in the weight room along with most of her teammates “so I see them on an everyday basis and they know I’m an athlete.”

And just like most of her teammates, she’s a lover of football. Sengbusch said she’s attended a number of Badgers games and has football in her blood, with her father Aaron playing under Kangas at Westfield from 1988-91.

While she admitted her dad was “definitely shocked” at first, it quickly turned into undying support.

“He always comes to every single one of my sports games, whether it’s basketball, softball, or football now,” Kimmy said.

Now she’s hoping that her kicking can inspire the next driven, football-loving girl to put on a pair of cleats and give it a chance. And when Kimmy does finally put one through the uprights, it will mean a lot more than just 1 or 3 points.

“With all the time she’s put in, it’ll be rewarding for her and not just the team and not just her, but for all the girls on the sideline that look at her and wait for her to step out onto that field,” Draheim said.

“I think when that day finally comes where she gets one through, I think it’ll be really rewarding for her and for a lot of people that look up to her.”

In his second season starting at the Wolf position, a hybrid of sorts in the Golden Beavers' 4-2-5 base defense Barstow ranks second in state with 61 total tackles through four games.

The Chiefs improved to 5-0 for the first time since at least 2002, while the Cardinals got nearly 250 yards and three scores from their star junior running back.

Westfield's Kimmy Sengbusch poses for a photo against the goalposts at Westfield Area High School during Tuesday's practice. With the Pioneers in need of numbers, the senior took up kicking field goals this summer to help ensure her classmates have a final season this fall.

Westfield senior Kimmy Sengbusch sends a kick towards the uprights during Tuesday's practice. Working alongside Middle School coach Dakota Draheim, Sengbusch has seen a massive improvement in her kicking skills in just a matter of months.

Westfield senior Kimmy Sengbusch sprints towards the goal line during the Pioneers' warm-ups on Tuesday.

Sengbusch said she had trouble getting height under the ball initially, but after months of hard work, she's truly honed her consistency. "It’s been very nice to see her transition from starting to where she is now; she’s progressed a lot," Westfield Middle School football coach Dakota Draheim said.