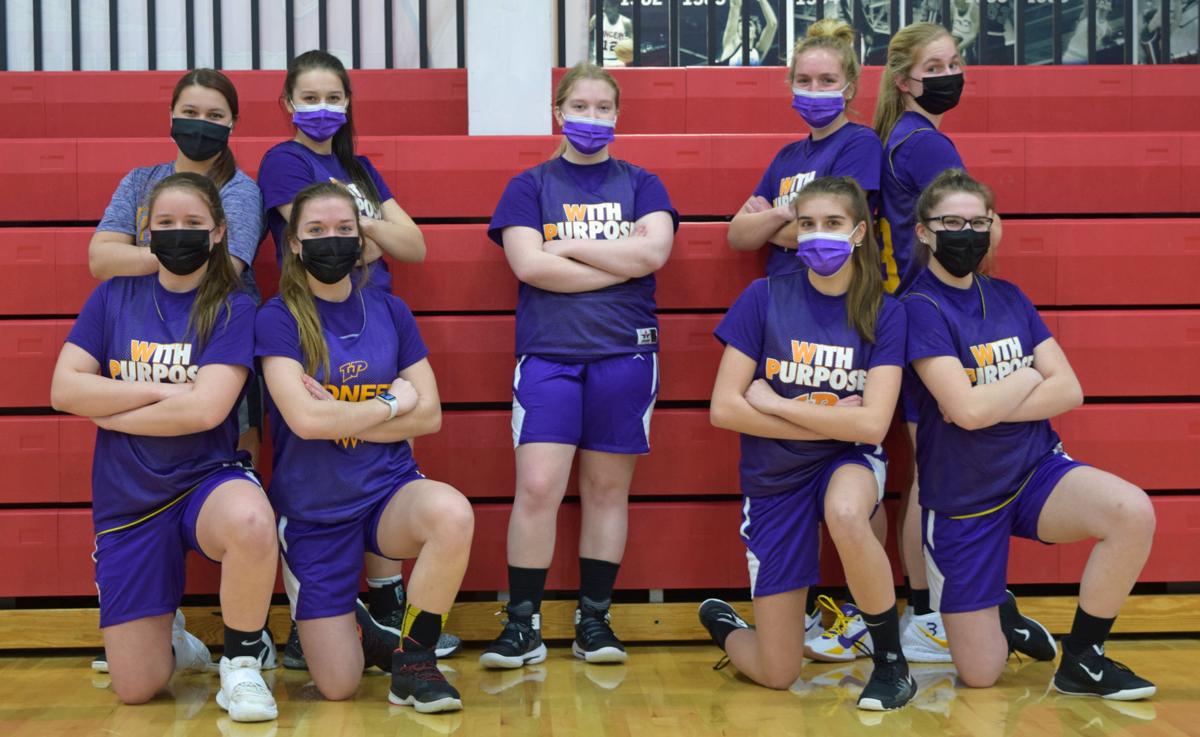 The Westfield girls basketball team features five sets of siblings this season, including Mya and Tahya Reetz (back left), Nadia and Sidney Hoffa (front left), Trista and Carly Drew (back right), Katie and Courtney Alcorta (front right) and Paige and Hannah Lietz (center; Hannah not pictured). The family dynamic among the Pioneers extends much further than the sets of siblings, helping fuel the team's first-ever dream run to the WIAA Division 3 state tournament. 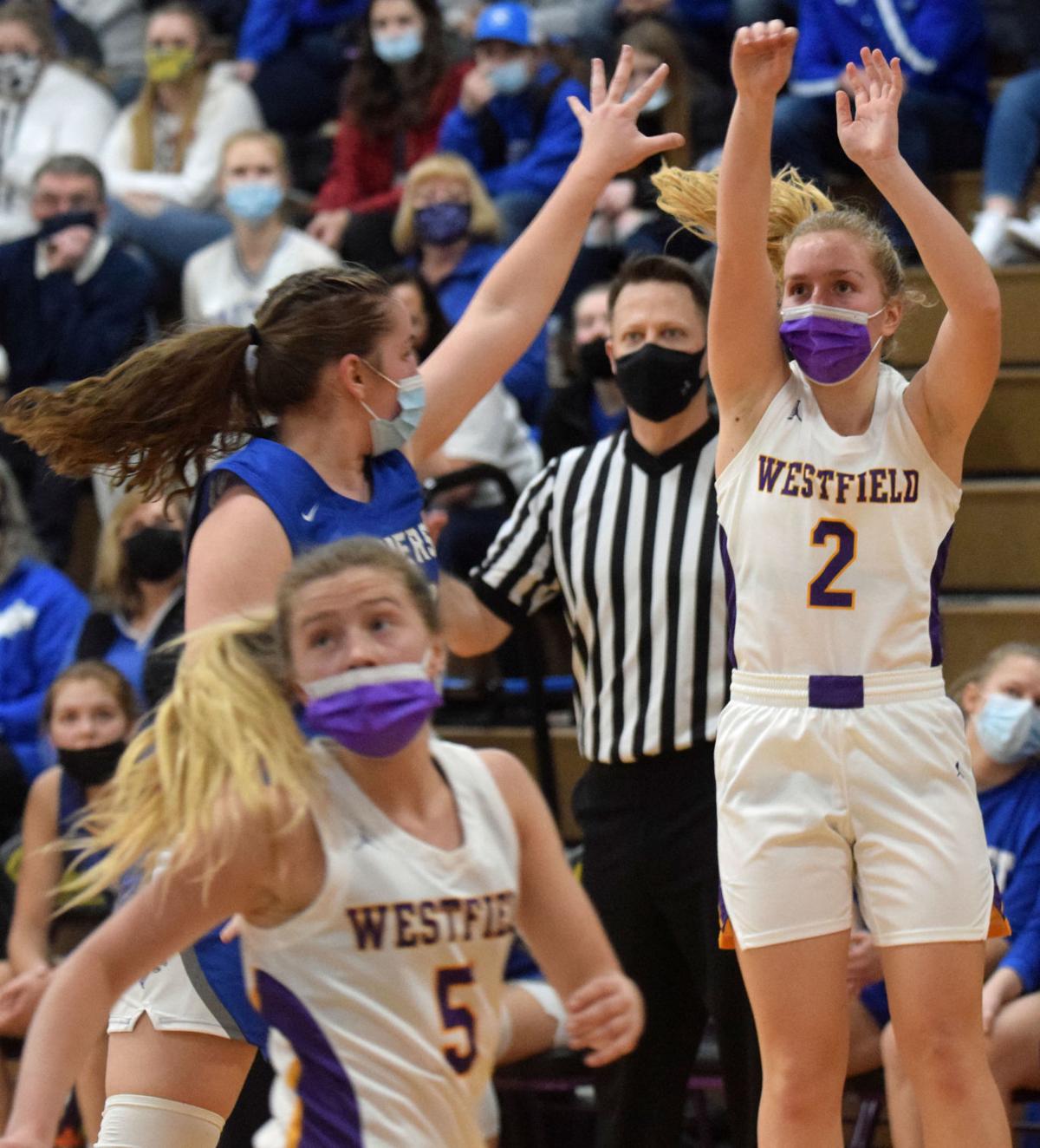 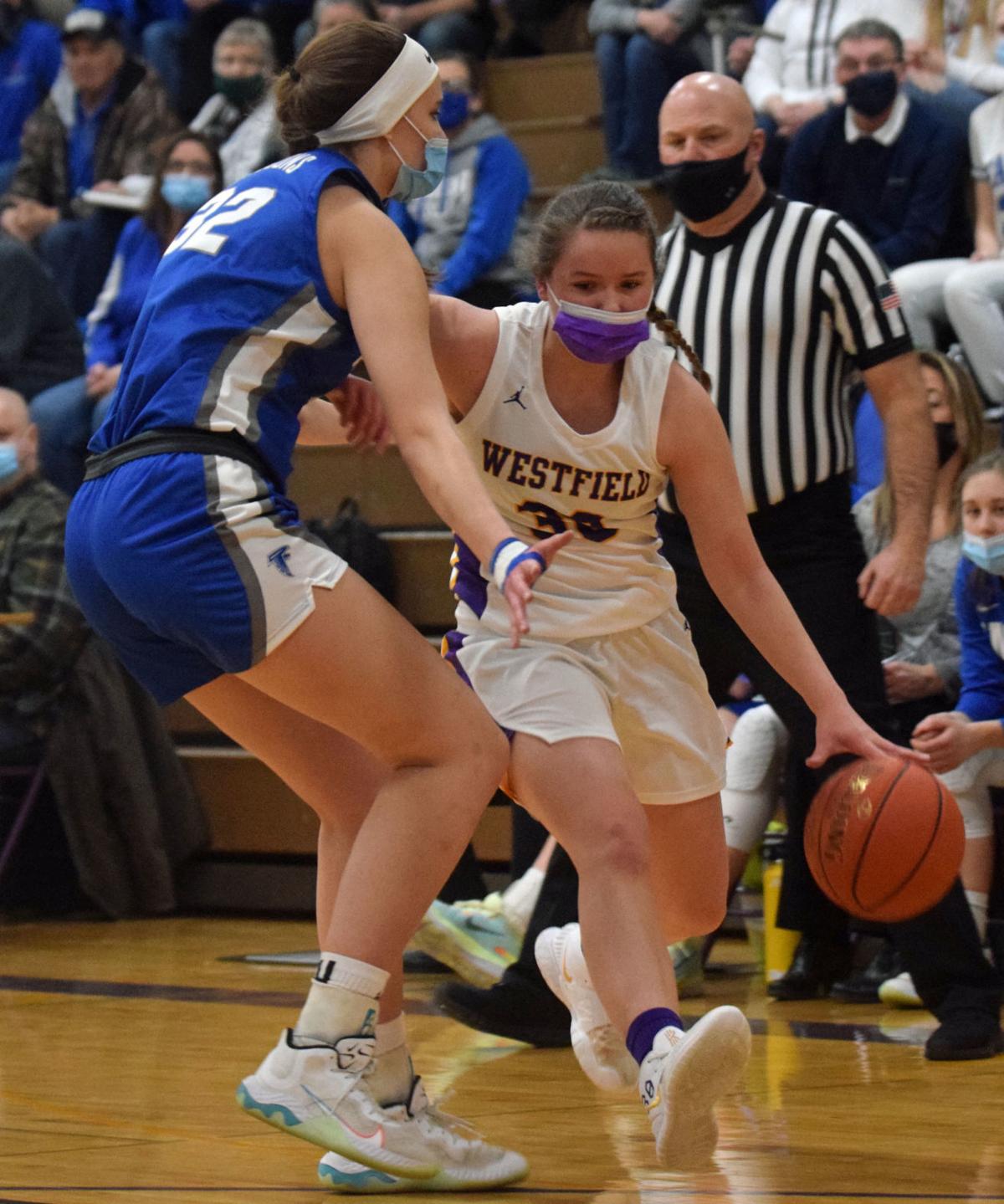 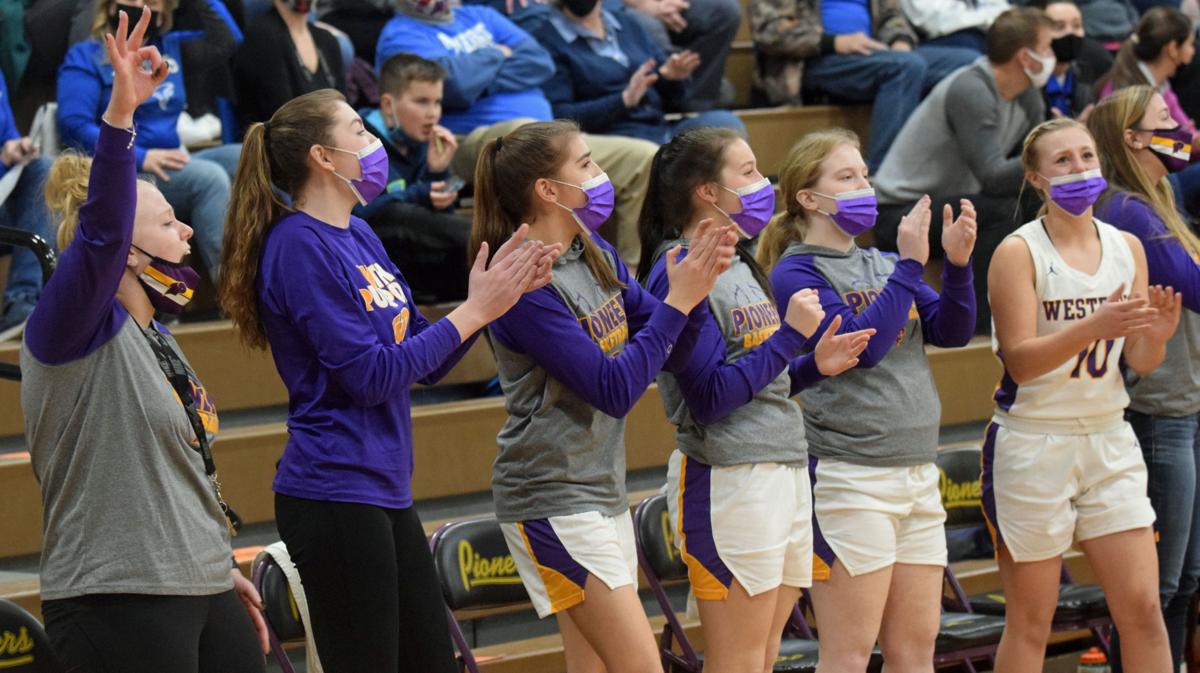 The Westfield bench cheers on a 3-pointer during last Saturday's WIAA Division 3 sectional final against Amherst. While most haven't seen the floor, the Pioneers bench has brought plenty of energy and played just as important a role this season.

WESTFIELD — Likely the number one word most student-athletes associate with their respective teams is “family.”

For three to four months a year, teammates learn and grow; practice and play; bond and connect together on bus rides, at team dinners, in games and in both victory, and defeat. While the COVID-19 pandemic has altered some of those traditions, the feeling of family hasn’t faded for the Westfield girls basketball team.

In fact, it might be even stronger for the Pioneers this year. Westfield uniquely has five sets of sisters interwoven throughout the entire program this season; from the JV team, to the varsity squad and even the coaching staff.

Blood has truly been thicker than water for the Pioneers this winter, and it’s been at the heart of the program’s magical first-ever trip to the WIAA Division 3 state tournament.

“There couldn’t be much more special than to go through something like this with a sibling. That’s got to be pretty special for the girls, and I’m really proud of them for that and really happy for them to get to go through it together.”

“I guess it just kind of shows the generations, like going throughout the program, and that’s really cool because you can play with one another and we hadn’t really up until this point,” junior Trista Drew added.

Trista Drew is getting that firsthand experience playing alongside her freshman sister Carly, who also starts for the Pioneers.

“It’s exciting because I play with her in the driveway and now we’re playing together on the court,” Trista added.

The connections don’t stop there, however. Senior Paige Lietz is part of the varsity roster, while younger sister Hannah, a freshman, is on the JV squad. Same goes for sophomore Katie Alcorta and freshman sister Courtney.

Meanwhile, sophomore Mya Reetz has the pleasure of being coached by older sister Tahya, who’s helping as an assistant under Showen after graduating last year. While that vast amount of personalities could lend itself to infighting, Showen said it’s been far from the case.

“They’re such a great group of girls and only twice on the season did we have any minor bickering going on,” said Showen, whose daughters Haddie and Libbie are the team’s managers.

“That’s one thing that I’ve loved about coaching the Westfield girls is it’s been, for lack of a better word, drama free the last five years. We show up, practice hard, listen, leave everything else at the door and we’re here to play basketball.

“It’s a great group of parents, that equals some good kids and it’s pretty amazing.”

That’s not to say things don’t get a little chippy when the Pioneers lace it up at practice. Sisterly “love” has broken out inside the Westfield High School gym throughout the season, including the lead up to the sectional final win over the Falcons.

Showen recounted Trista and Carly Drew crashing into each other at last Friday’s practice, ultimately needing to catch their breath for a good 30 seconds before getting right back to work.

“I definitely know how far I can push her because of how close we are, and it’s fun to push each other and kind of persevere to know there’s so much more to come. She’s tough,” Trista said.

“It’s good to know we’re there for each other and always have somebody to rely on,” added Carly, noting there’s plenty of added motivation to get one over on her big sister.

While the Drew sisters have been able to share in their success as regulars in the Pioneers’ rotation, that hasn’t been the case for all the siblings as Nadia Hoffa is the lone twin to truly get playing time.

The girls determination and dedication hasn’t wavered, however, with the group being in the gym each day to push one another as hard as they can.

“It comes down to they’re all just a bunch of competitors. They kind of believe in it, believe in what we’re doing and I hope they’re having a good time as well.”

He’s certainly not wrong. According to Trista, unlike their usually silent bus rides home, the team was ecstatic following its 55-39 sectional semifinal win over Bonduel on Feb. 18. The enjoyment hasn’t been felt solely by the siblings.

Senior Lexi Brakebush is the only member of her family on this year’s Westfield team, despite being the middle child among five kids. Still, she and the rest of the team play just as large a role in the Pioneer family.

“I love it. We all trust each other, believe in each other and push each other,” she said.

“It’s great because we always know how to get somebody up if someone’s down or how each other feels,” Carly added.

The siblings, whose mother Bonnie (Henke) starred during her four years as a Pioneer and is inducted in the school’s Athletic Hall of Fame, have also shown a heightened communication throughout the year. The non-verbal cues, according to Trista, have been easy to pick up, providing a leg up “because we understand each other’s communication and what we need to do to get things done.”

Next on that list is taking on top-seeded La Crosse Aquinas in Friday morning’s Div. 3 state semifinals at Menominee Nation Arena in Oshkosh. The No. 1 Blugolds (21-0) won’t be easy to beat, but regardless of what the final scoreboard reads, the experience itself will be a special one to cherish and add to the family photo album.

“That’s got to be pretty special for the girls, and I’m really proud of them for that and really happy for them to get to go through it together,” Showen said.

WESTFIELD — It’s true what they say about the postseason, you truly can throw out the record books.

BONDUEL — On the road, against an undefeated ranked foe, in the program’s first sectional semifinal appearance in a decade wasn’t an ideal sce…

PREP GIRLS BASKETBALL: Fan support strong as ever amid pandemic as Westfield readies for state debut

WESTFIELD — While maybe not as exaggerated as in the likes of Hoosiers, Friday Night Lights or Varsity Blues, small towns all across the count…

OSHKOSH — In a traditional season, the Westfield High School gymnasium would be jam packed night in and night out cheering on the Pioneers bas…

The 2020-21 season was filled with firsts for the Westfield girls basketball team.

The Westfield girls basketball team features five sets of siblings this season, including Mya and Tahya Reetz (back left), Nadia and Sidney Hoffa (front left), Trista and Carly Drew (back right), Katie and Courtney Alcorta (front right) and Paige and Hannah Lietz (center; Hannah not pictured). The family dynamic among the Pioneers extends much further than the sets of siblings, helping fuel the team's first-ever dream run to the WIAA Division 3 state tournament.

The Westfield bench cheers on a 3-pointer during last Saturday's WIAA Division 3 sectional final against Amherst. While most haven't seen the floor, the Pioneers bench has brought plenty of energy and played just as important a role this season.