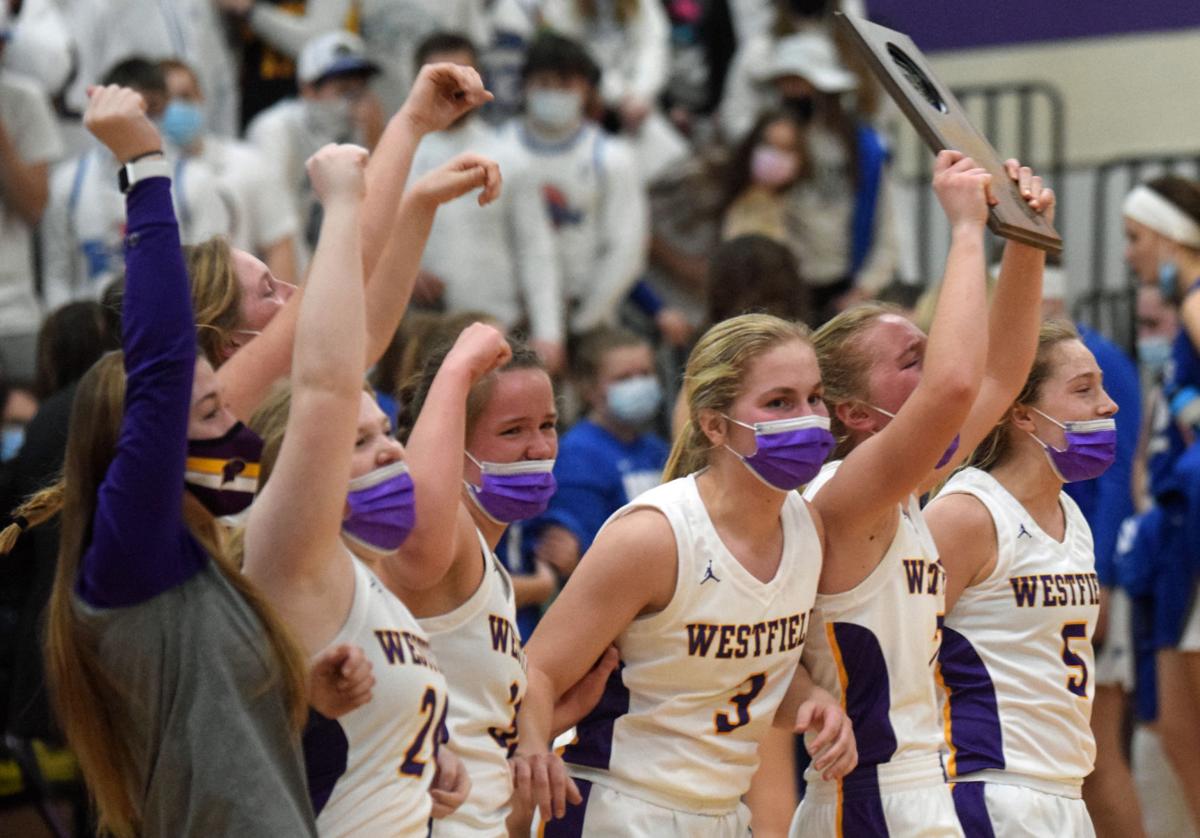 The Westfield girls basketball team celebrates after claiming the program's first-ever sectional championship with a 58-55 win over Amherst on Saturday in a WIAA Division 3 sectional final at Westfield High School. 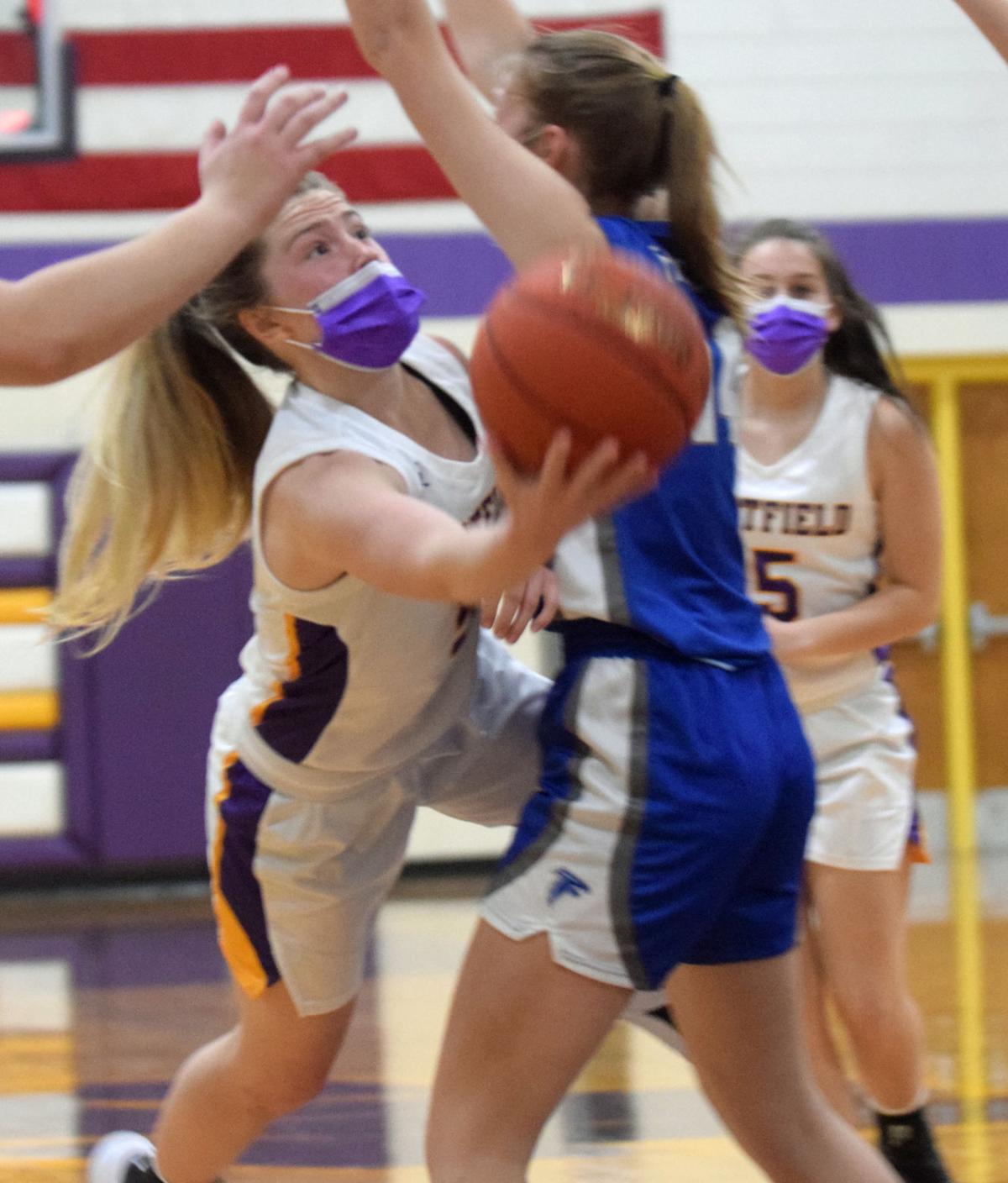 Westfield senior Lexi Brakebush gets off a scoop layup against Amherst's Haley Peskie during a WIAA Division 3 sectional final game on Saturday at Westfield High School. 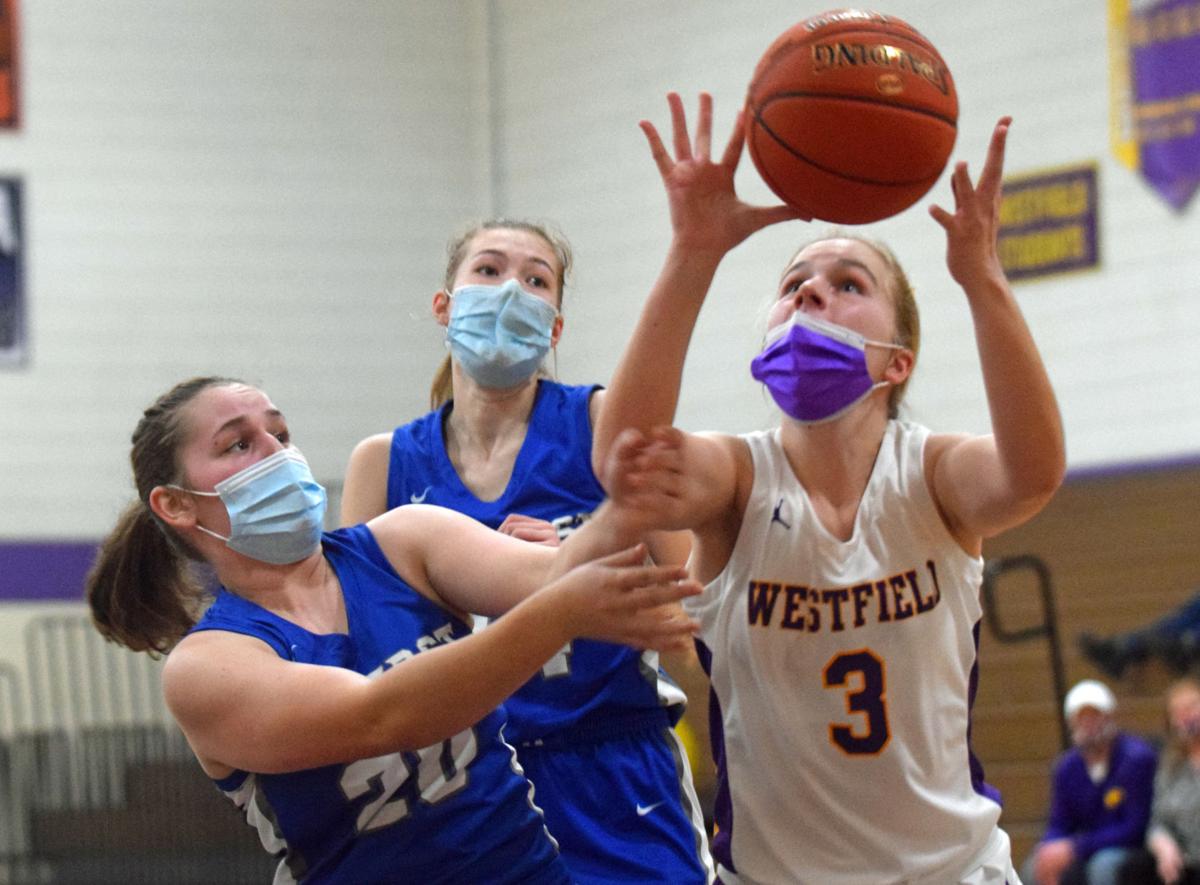 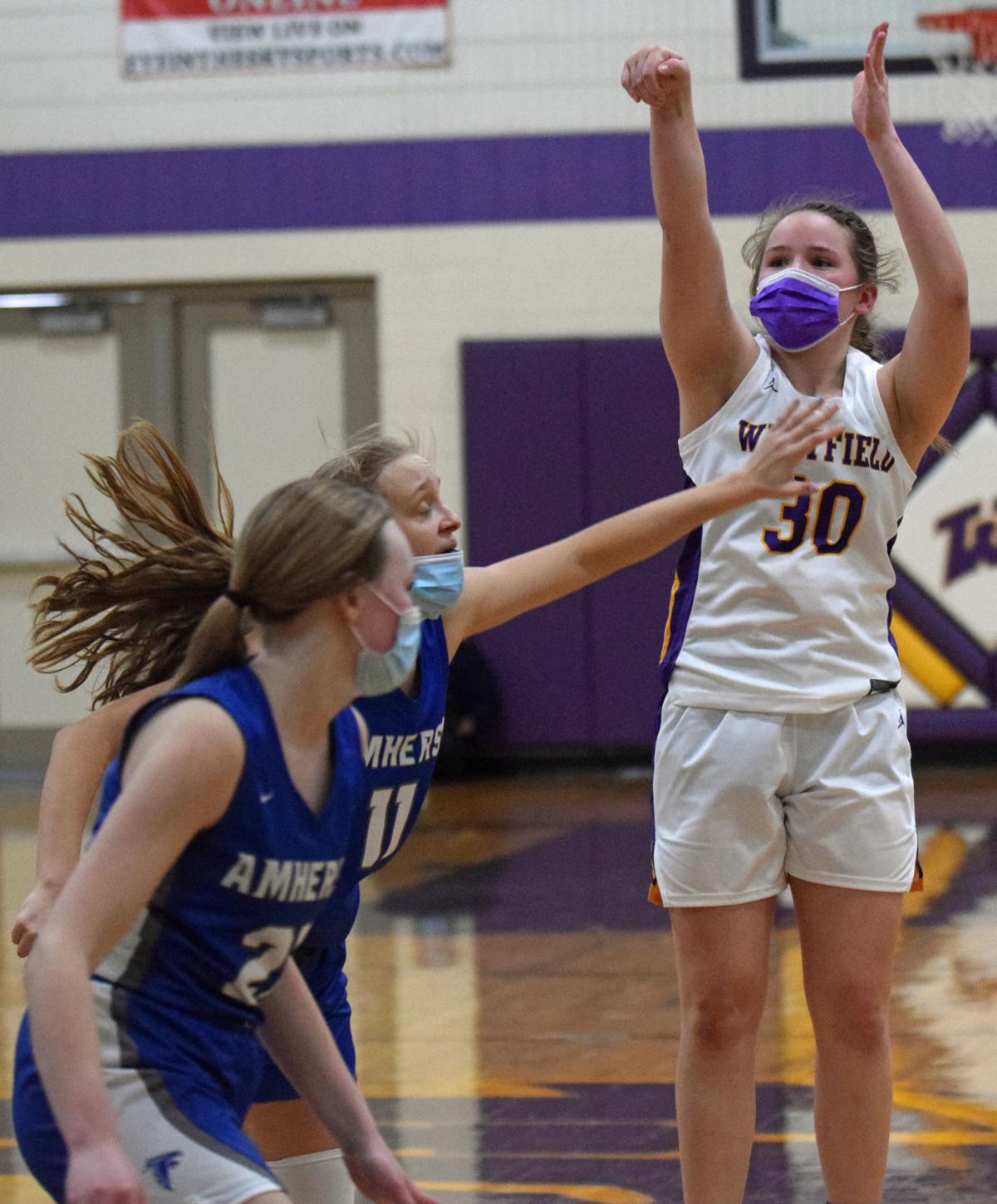 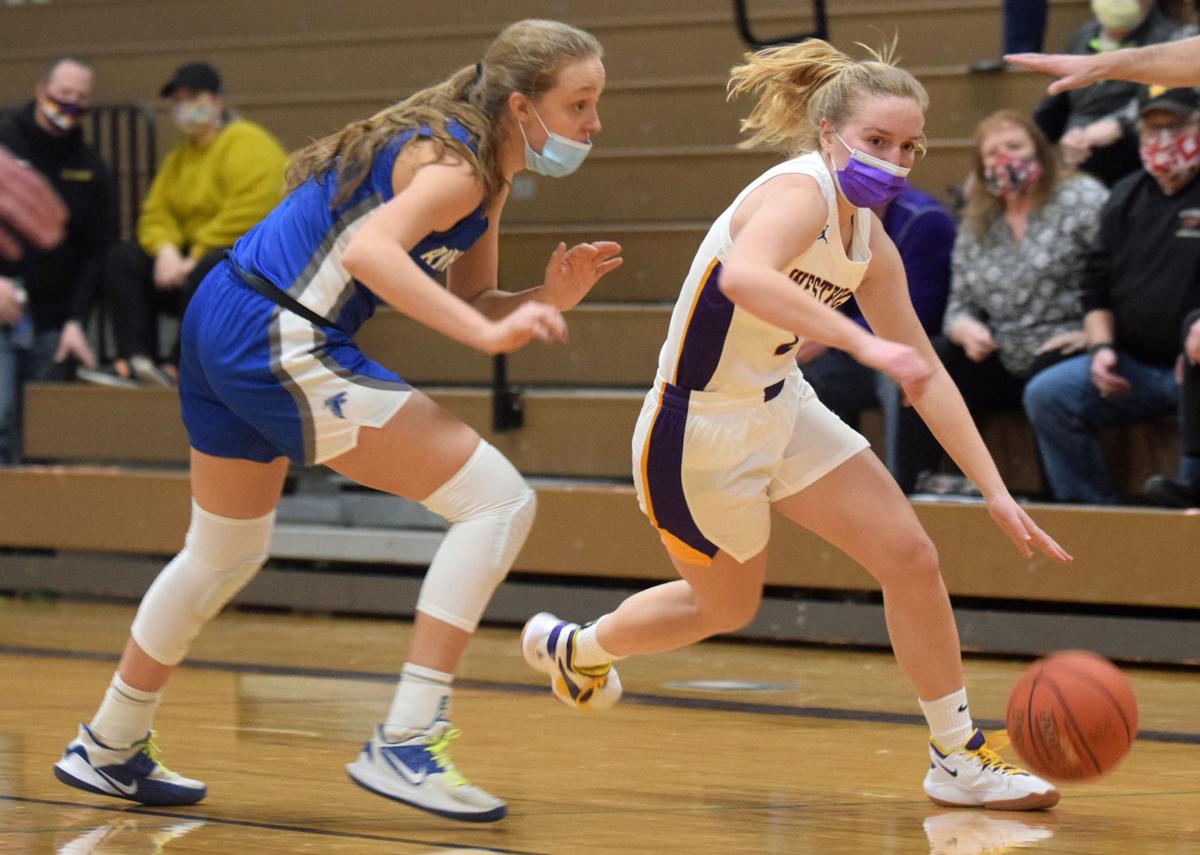 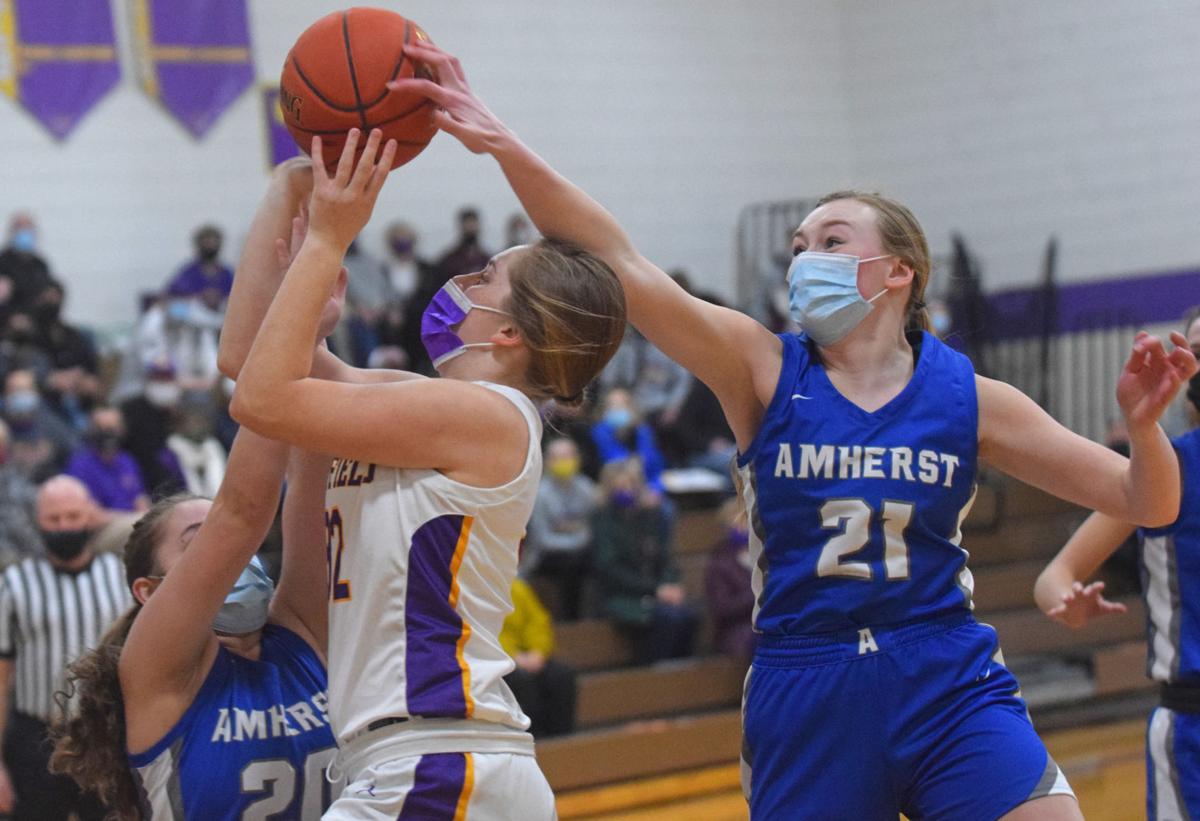 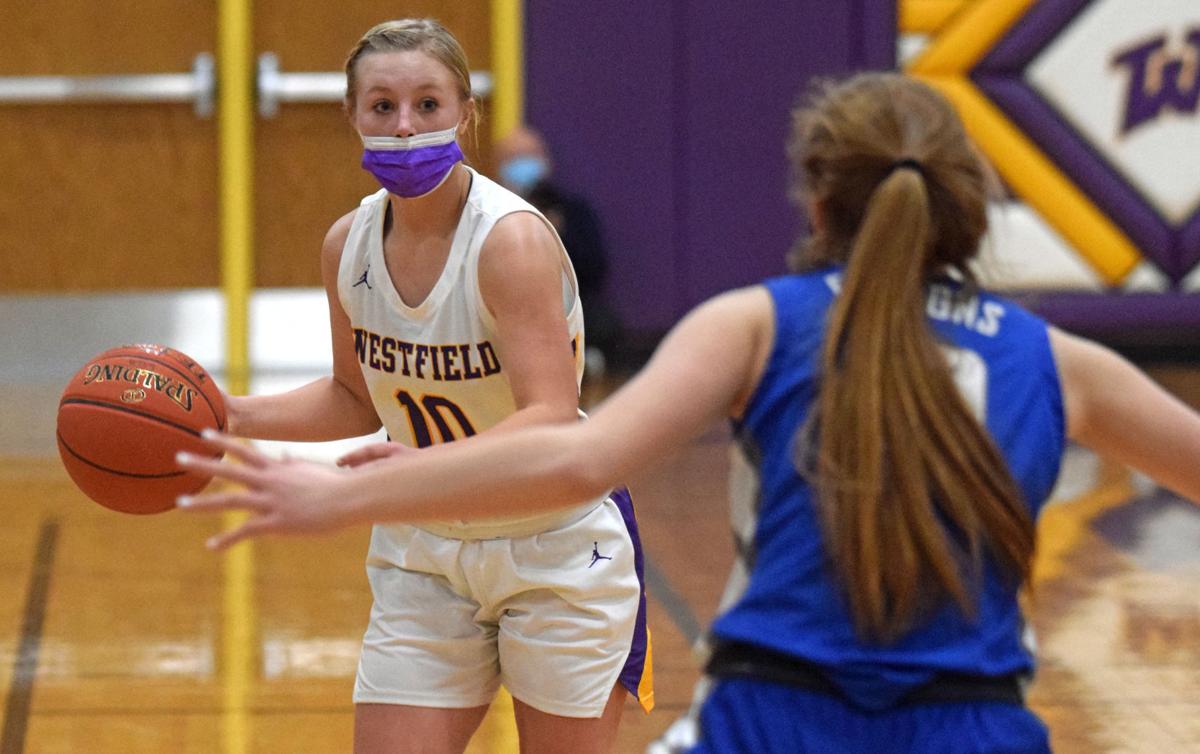 Westfield junior Kimmy Sengbusch looks to an open teammate to pass to as she brings the ball up court against Amherst's Tatum Maves during a WIAA Division 3 sectional final game on Saturday at Westfield High School. 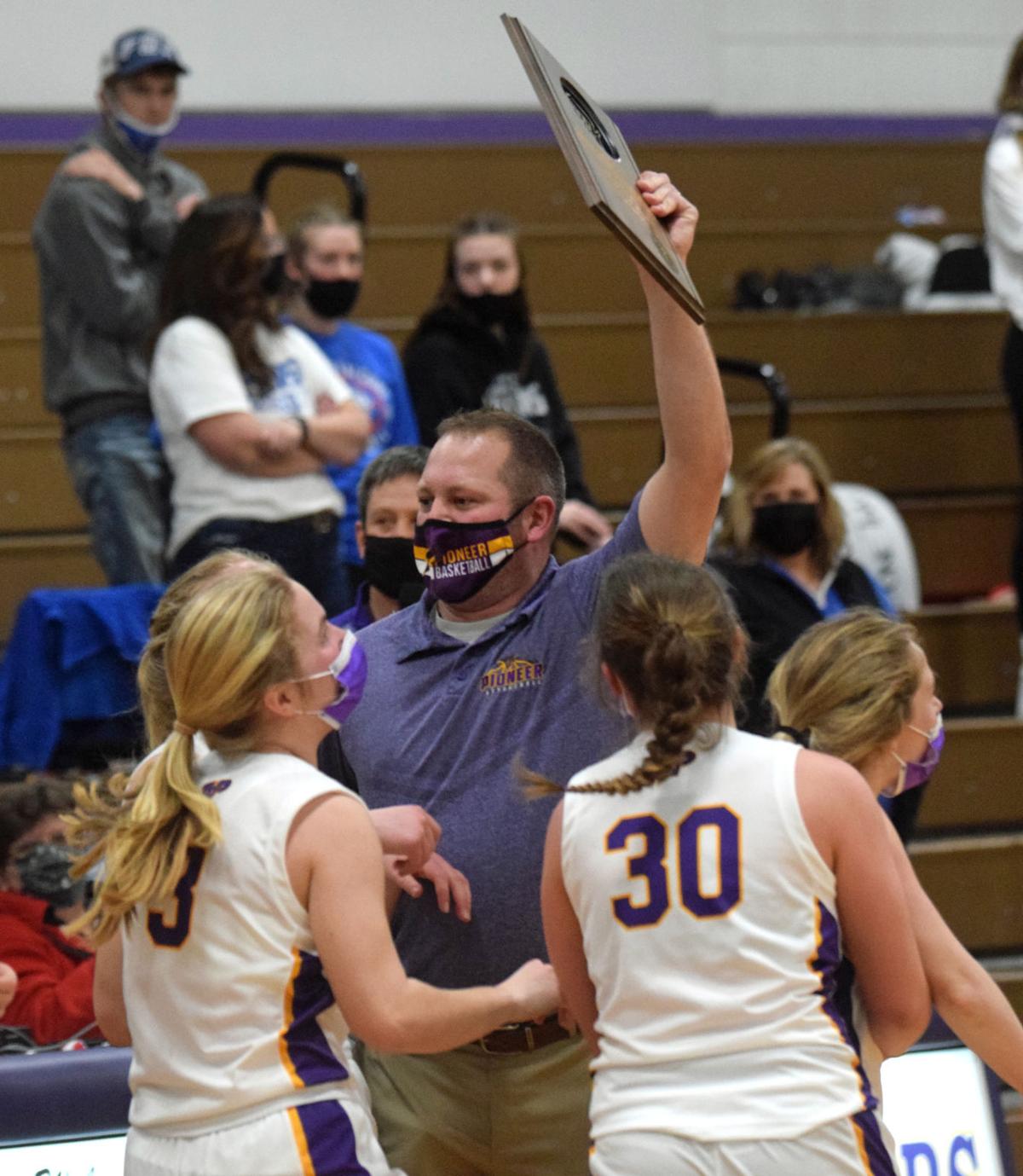 WESTFIELD — It’s true what they say about the postseason, you truly can throw out the record books.

The Westfield girls basketball team did just that and then some Saturday afternoon.

In just their second-ever sectional final appearance, the third-seeded Pioneers gutted out a 58-55 win over Amherst to punch their ticket to state for the first time in program history at Westfield Area High School. Westfield coach Luke Showen admittedly said he didn’t believe state was a possibility entering this season.

One thing he did know was that the Pioneers don’t quit, and that was on display all afternoon against the No. 4 Falcons.

“We’re a bunch of competitors. We were outsized this game, at every position. We battled like no other, hit a couple shots and some free throws at the end, and got some stops on defense,” he said.

“The girls work so hard. The COVID situation allowed us to host a sectional final — that doesn’t happen — and leave it to the fans in attendance. I can’t say enough for both the girls and myself. Every one of them tonight played tough.”

That toughness exuded down the stretch, fittingly from every player on the floor, a trend the Pioneers (20-5) have carried with them all season. Trailing 52-51 after a 3-pointer by Amherst’s Hannah Wall, sophomore Brandi Lentz was hit hard while going up for a runner with 2 minutes, 16 seconds left to play.

Lentz — who proudly displayed a shiner on her right eyebrow after the game — needed to be checked out by the trainer, forcing sub Kimmy Sengbusch to take the foul shots. Cool as you like, the junior banked in both free throws for a 53-52 lead and her only points of the night.

“I told her ‘Just don’t be short.’ She banked ‘em both in,” Showen said with a chuckle.

“You talk about pressure; 16-year old girls with everybody screaming at you, stepping to the line and shooting free throws. That’s what it’s all about.”

“I was extremely scared, but all I knew was that I had to get it on line so it had a chance of going in, at least. But when it went in I was like ‘Oh my god,’” Sengbusch added.

The teams then traded buckets — a 3-pointer by Amherst’s Brooke Wideman and a Carly Drew baseline layup — to ultimately knot things at 55 with 1:15 to go. Westfield’s defense won out from there however, as the Pioneers caged the Falcons (14-8) the rest of the way and ultimately taking a 56-55 lead on a Trista Drew free throw with 45.9 seconds remaining.

Westfield forced a turnover on Amherst’s following possession as it tried to dump the ball into 6-foot-3 post Sydney Lehman, before senior Lexi Brakebush was fouled with 27 seconds remaining. She made both foul shots to extend the lead to 58-55.

Holding for the last shot, the Pioneers forced the Falcons to burn a timeout with 13.1 seconds remaining and then made Wall, who scored 16 points, to hoist a near half-court shot in the final seconds that drew iron and sent the Pioneers and their fans into sheer pandemonium.

“We talk about the little things on defense all the time, and the number one thing on every game’s scouting report is focus and effort. These girls had it tonight; they had the focus and the effort,” Showen said.

“You’re going to have breakdowns, but overall, focused and undeniably great effort.”

That effort showed in the first half as the Falcons raced out of the gates. After Brakebush, who scored 13, buried a 3-pointer for the opening points of the game, Amherst responded with a 10-0 run, including six points from Lehman, who finished with 18, for a 10-3 lead.

The lead never grew larger as the Pioneers clawed back to tie things up at 14 on a Carly Drew coast-to-coast layup with 7 minutes until halftime. Amherst started to get back off the ground, seizing a 27-20 lead with 1:49 to go on two Wall free throws but Westfield closed out the half with a 5-1 spurt, including a Brakebush scoop layup at the horn, to inch within 28-24 at halftime.

“I tell these girls all the time ‘Games are not won or lost at halftime,’ and we kept fighting. That’s probably our motto I guess; a bunch of competitors and we’ve got six girls that can get the job done. We got the job done today,” Showen said.

“We believed the whole time, we wanted it and got it done,” Brakebush added.

Carly Drew led the Pioneers with 15 and Lentz tacked on a dozen, while Alexa Shulfur chipped in eight for the Falcons. Nadia Hoff and Trista Drew each tacked on eight for the Pioneers, who again displayed the depth they’ve shown all season long, unsurprisingly to Showen.

“They surpassed my expectations with how unselfish they’ve played all season, and they know that one girl can’t get you to the state tournament,” he said. “It takes everybody from our senior Lexi to our practice players, it takes everybody and they really believe in that. There’s no I in team and they believe in each other, and I think that’s the most important thing.”

They’ll need that belief as the Pioneers received the No. 4 seed and will face top-seeded La Crosse Aquinas (21-0) in the first of Friday's two semifinals at Menominee Nation Arena in Oshkosh at 10:45 a.m.

The winner will meet either No. 2 Lake Mills (23-2) or third-seeded Howards Grove (24-1) in the Div. 3 state championship game Friday at 8:15 p.m. The Pioneers' trio of adversaries are no spring chickens when it comes to the big dance.

The Blugolds have won each of the last two Div. 4 state titles, while the Tigers won it all in 2017 and the L-Cats are headed back to the big dance for a second straight year.

Regardless, what the Pioneers need to do to continue their magical season is simple in Brakebush’s eyes.

REEDSBURG — Saturday night’s final buzzer at Reedsburg Area High School represented a culmination and the start of a new chapter.

BONDUEL — On the road, against an undefeated ranked foe, in the program’s first sectional semifinal appearance in a decade wasn’t an ideal sce…

GERMANTOWN — Beaver Dam’s prep girls basketball team has, for the most part, made getting to the state tournament look easy during the program…

WESTFIELD — Likely the number one word most student-athletes associate with their respective teams is “family.”

PREP GIRLS BASKETBALL: Fan support strong as ever amid pandemic as Westfield readies for state debut

WESTFIELD — While maybe not as exaggerated as in the likes of Hoosiers, Friday Night Lights or Varsity Blues, small towns all across the count…

OSHKOSH — In a traditional season, the Westfield High School gymnasium would be jam packed night in and night out cheering on the Pioneers bas…

The 2020-21 season was filled with firsts for the Westfield girls basketball team.

The Westfield girls basketball team celebrates after claiming the program's first-ever sectional championship with a 58-55 win over Amherst on Saturday in a WIAA Division 3 sectional final at Westfield High School.

Westfield senior Lexi Brakebush gets off a scoop layup against Amherst's Haley Peskie during a WIAA Division 3 sectional final game on Saturday at Westfield High School.

Westfield junior Kimmy Sengbusch looks to an open teammate to pass to as she brings the ball up court against Amherst's Tatum Maves during a WIAA Division 3 sectional final game on Saturday at Westfield High School.