You have run out of free articles. You can support our newsroom by joining at our lowest rate!
Already a subscriber?
Log in or Activate your account.
Loading&hellp
No thanks, return to homepage.

Haley Jensson, a University of Wisconsin-Madison student, researches Monday morning the history of the house that once belonged to Portage author Zona Gale and now houses the Museum at the Portage, where Jensson is interning.

Starting July 8, Museum at the Portage will reopen its doors to once again share the city’s history with visitors, but only by appointment and visitors will be required to wear a face covering.

Vicki Vogts, president of the Portage Historical Society that maintains the museum on MacFarlane Road, said people will need to call 608-742-6682 at least a day before visiting to allow docents to sanitize any touched surfaces between appointments.

“It will be nice that we can have people, because we wanted to reopen,” Vogts said Monday. “We hate being closed, that’s for sure.”

The museum is implementing new cleaning procedures, social distancing and mask requirements when it reopens next week in light of the coronavirus pandemic. Originally slated to open April 1 for the season, the museum remained closed due to the state’s stay-at-home order.

“We really would love it if people wanted to start coming to see us, but with COVID, we don’t know. We don’t know if people are going to want to come or not,” Vogts said.

Hand sanitizer also will be available for visitors, who will be limited to 10 at a time in the building, five on each floor.

The museum is free to enter, but welcomes donations. Vogts and Dave Eulberg, Portage Historical Society treasurer, said donations are down “significantly” this year because of the closure. Of the organization’s total $22,000 in annual revenues, donations account for about $5,000, while $7,000 comes as a stipend from the city and the rest is from membership dues, Eulberg said.

While expenses are also lower this year, he noted that there are some costs that remain such as maintaining the historic building. Memberships are down, too. He didn’t have specific numbers on this year’s donations Monday afternoon.

“We still have to spend some money on things that we do, so we’re always looking for donations,” Eulberg said.

To correspond with other local historic sites, Museum at the Portage will be open Wednesdays through Sundays this summer, a change from last year, Vogts said. That allows those visiting the Indian Agency House or the Fort Winnebago Surgeons Quarters to add the museum to their day trip while in the area.

She’s hoping the Wisconsin Historical Society’s most recent magazine, featuring an article and cover art on Portage author and playwright Zona Gale, will spark interest in the museum housed in Gale’s historic home.

The article was written by the museum’s 2019 University of Wisconsin-Madison summer intern, Matthew Noojin.

“We were very happy to see that come out,” Vogts said.

Vogts noted the historical society also hopes to hold the annual Friendship Village event celebrating Gale on Aug. 15, though it may require reservations, depending on the status of COVID-19’s spread.

“It is nice when people come in and we can share what’s here,” Mautz said, adding, “but it’s nice being in here and working, catching up on things when people aren’t here.”

WASHINGTON — Eight Republican lawmakers attended a White House briefing Monday about explosive allegations that Russia secretly offered bounties to Taliban-linked militants for killing American troops in Afghanistan — intelligence the president himself was said to have not been fully read in on.

Members of Congress in both parties called for additional information and consequences for Russia and its president, Vladimir Putin, even as White House press secretary Kayleigh McEnany insisted President Donald Trump was not briefed on the findings because they weren’t verified. Eight Democrats were to be briefed Tuesday morning.

The White House seemed to set an unusually high bar for bringing the information to Trump, since it is rare for intelligence to be confirmed without a shadow of doubt before it is presented to senior government decision-makers. McEnany declined to say why a different standard of confidence in the intelligence applied to briefing lawmakers than bringing the information to the president.

Republicans who were in the briefing expressed alarm about Russia’s activities in Afghanistan.

Rep. Michael McCaul, the ranking member of the House Foreign Affairs Committee, and Rep. Adam Kinzinger were in the briefing Monday led by Director of National Intelligence John Ratcliffe, White House chief of staff Mark Meadows and National Security Adviser Robert O’Brien. McCaul and Kinzinger said in a statement that lawmakers were told “there is an ongoing review to determine the accuracy of these reports.”

“If the intelligence review process verifies the reports, we strongly encourage the Administration to take swift and serious action to hold the Putin regime accountable,” they said.

Rep. Liz Cheney, R-Wyo., and Texas Rep. Mac Thornberry, the top Republican on the House Armed Services Committee, said, “After today’s briefing with senior White House officials, we remain concerned about Russian activity in Afghanistan, including reports that they have targeted U.S. forces.”

On CNN, House Speaker Nancy Pelosi confirmed the timing of the Democratic briefing but said “it’s no substitute for what they owe the Congress of the United States.” She said “this is as serious as it gets.”

She speculated that Trump wasn’t briefed “because they know it makes him very unhappy, and all roads for him, as you know, lead to Putin. And would he tell Putin what they knew?”

McEnany, for her part, repeatedly stated that the allegations were not confirmed.

The intelligence assessments came amid Trump’s push to withdraw the U.S. from Afghanistan. They suggested Russia made overtures to militants as the U.S. and the Taliban held talks to end the long-running war. The assessment was first reported by The New York Times, then confirmed to The Associated Press by American intelligence officials and two others with knowledge of the matter.

Republican Sen. John Cornyn said Monday, “I don’t think it’s should be a surprise to anybody that the Taliban’s been trying to kill Americans and that the Russians have been encouraging that, if not providing means to make that happen.”

The intelligence community has been investigating an April 2019 attack on an American convoy that killed three U.S. Marines after a car rigged with explosives detonated near their armored vehicles as they traveled back to Bagram Airfield, the largest U.S. military installation in Afghanistan, officials told the AP.

One official said the administration discussed several potential responses, but the White House has yet to authorize any step.

The intelligence officials said Trump was briefed on the bounty matter this year; Trump denied that, tweeting Sunday that neither he nor Vice President Mike Pence had been briefed. Trump tweeted Sunday night he was just told intelligence officials didn’t report the information to him because they didn’t find it credible.

The intelligence officials and others with knowledge of the matter insisted on anonymity.

Trump’s Democratic general election rival, former Vice President Joe Biden, used an online fundraiser Monday to hammer the president for a “betrayal” of American troops in favor of “an embarrassing campaign of deferring and debasing himself before Putin.”

“I’m disgusted,” Biden told donors, as he recalled his late son Beau’s military service. Families of service members, Biden said, “should never, ever have to worry they’ll face a threat like this: the commander-in-chief turning a blind eye.”

Asked about the reports on the alleged bounties, Putin’s spokesman Dmitry Peskov said Monday, “These claims are lies.” 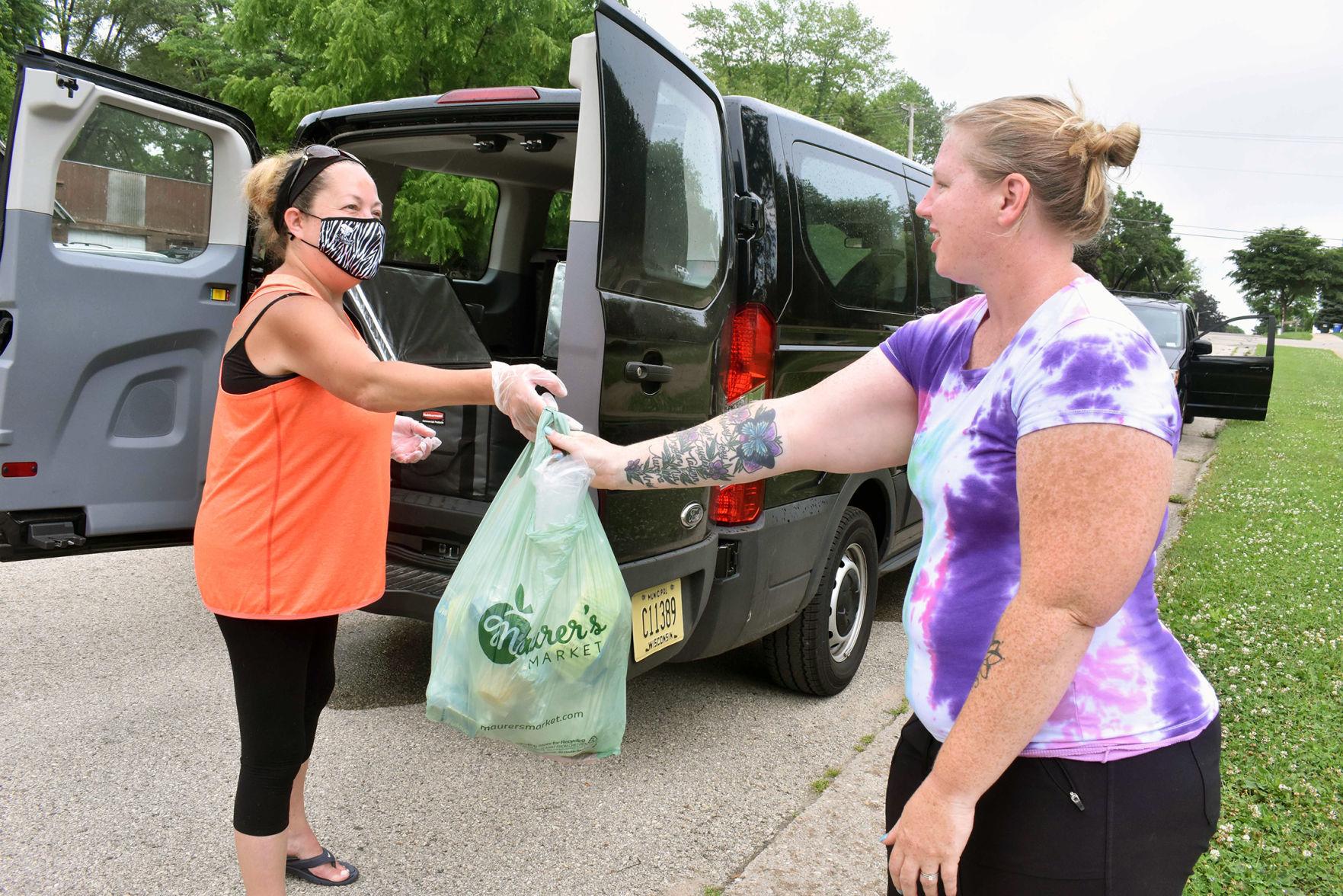 Terrisa Bukovinac, founder of Pro-Life San Francisco, holds a model of a fetus Monday as she and other anti-abortion protesters wait outside the Supreme Court for a decision. The Supreme Court struck down a Louisiana law regulating abortion clinics, reasserting a commitment to abortion rights over fierce opposition from dissenting conservative justices in the first big abortion case of the Trump era.

A child runs down the steps of the Supreme Court on Monday in Washington as an anti-abortion protester holds a sign.

WASHINGTON — A divided Supreme Court on Monday struck down a Louisiana law regulating abortion clinics, reasserting a commitment to abortion rights over fierce opposition from dissenting conservative justices in the first big abortion case of the Trump era.

Chief Justice John Roberts and his four more liberal colleagues ruled that a law that requires doctors who perform abortions must have admitting privileges at nearby hospitals violates abortion rights the court first announced in the landmark Roe v. Wade decision in 1973.

The outcome is far from the last word on the decades-long fight over abortion with dozens of state-imposed restrictions winding their way through the courts. But the decision was a surprising defeat for abortion opponents, who thought that a new conservative majority with two of President Donald Trump’s appointees on board would start chipping away at abortion access.

The key vote belonged to Roberts, who always voted against abortion rights before, including in a 2016 case in which the court struck down a Texas law that was virtually identical to the one in Louisiana. The chief justice explained that he continues to think the Texas case was wrongly decided, but believes it’s important for the court to stand by its prior decisions.

“The result in this case is controlled by our decision four years ago invalidating a nearly identical Texas law,” Roberts wrote. He did not join the opinion written by Justice Stephen Breyer for the other liberals in Monday’s decision.

The case was the third in two weeks in which Roberts, a George W. Bush appointee, joined the court’s liberals in the majority. One of the earlier decisions preserved the legal protections and work authorization for 650,000 immigrants who were brought to the U.S. as children. The other extended federal employment-discrimination protections to LGBT Americans, a decision that Justice Neil Gorsuch also joined and wrote.

Trump’s two high-court picks, Gorsuch and Brett Kavanaugh, were in dissent, along with Samuel Alito. The presence of the new justices is what had fueled hopes among abortion opponents, and fears on the other side, that the Supreme Court would be more likely to uphold restrictions.

The Trump administration sided with Louisiana in urging the court to uphold the law. White House Press Secretary Kayleigh McEnany criticized the decision. “In an unfortunate ruling today, the Supreme Court devalued both the health of mothers and the lives of unborn children by gutting Louisiana’s policy that required all abortion procedures be performed by individuals with admitting privileges at a nearby hospital,” McEnany said.

On the other side, support for the decision mixed with a wariness that the future of abortion rights appears to rest with Roberts.

Nancy Northup, president and CEO of the Center for Reproductive Rights, said Monday’s decision by no means ends the struggle over abortion rights in legislatures and the courts.

“We’re relieved that the Louisiana law has been blocked today but we’re concerned about tomorrow. With this win, the clinics in Louisiana can stay open to serve the one million women of reproductive age in the state. But the Court’s decision could embolden states to pass even more restrictive laws when clarity is needed if abortion rights are to be protected,” Northup said.

In other rulings Monday: