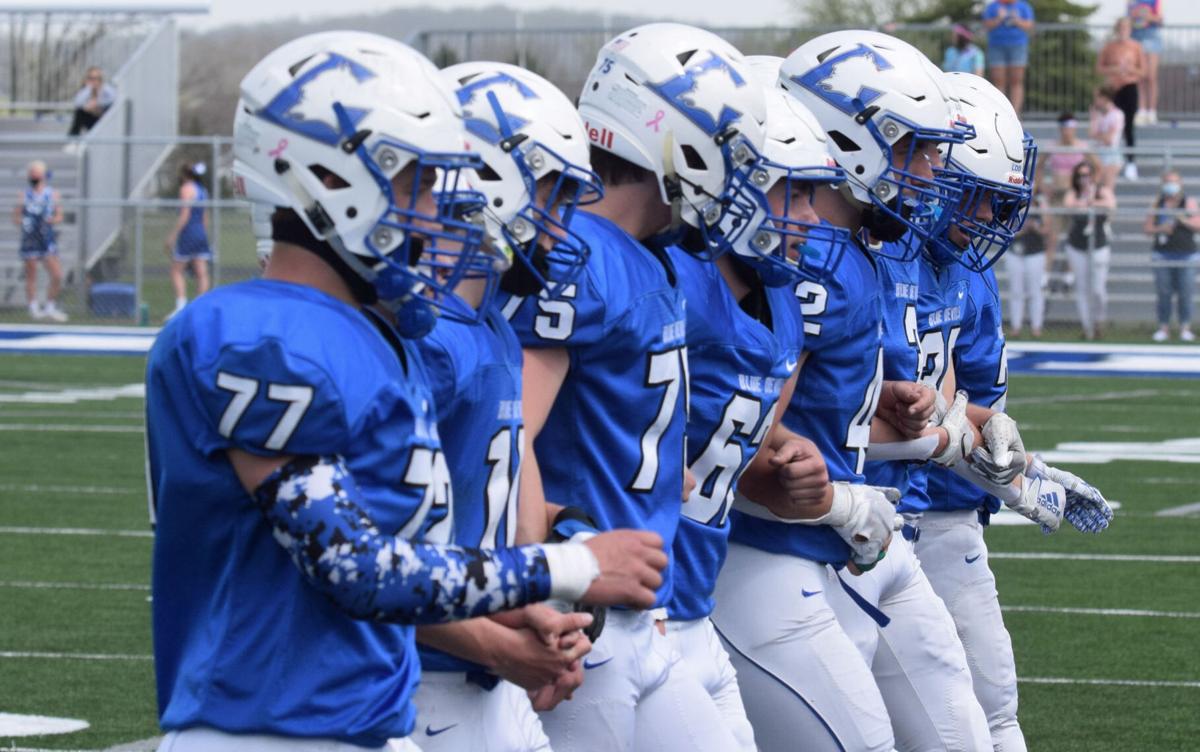 The Lodi football team's 11-man senior class walk off the field, arm-in-arm for the final time together during Saturday's non-conference game against Kewaunee at Lodi High School. 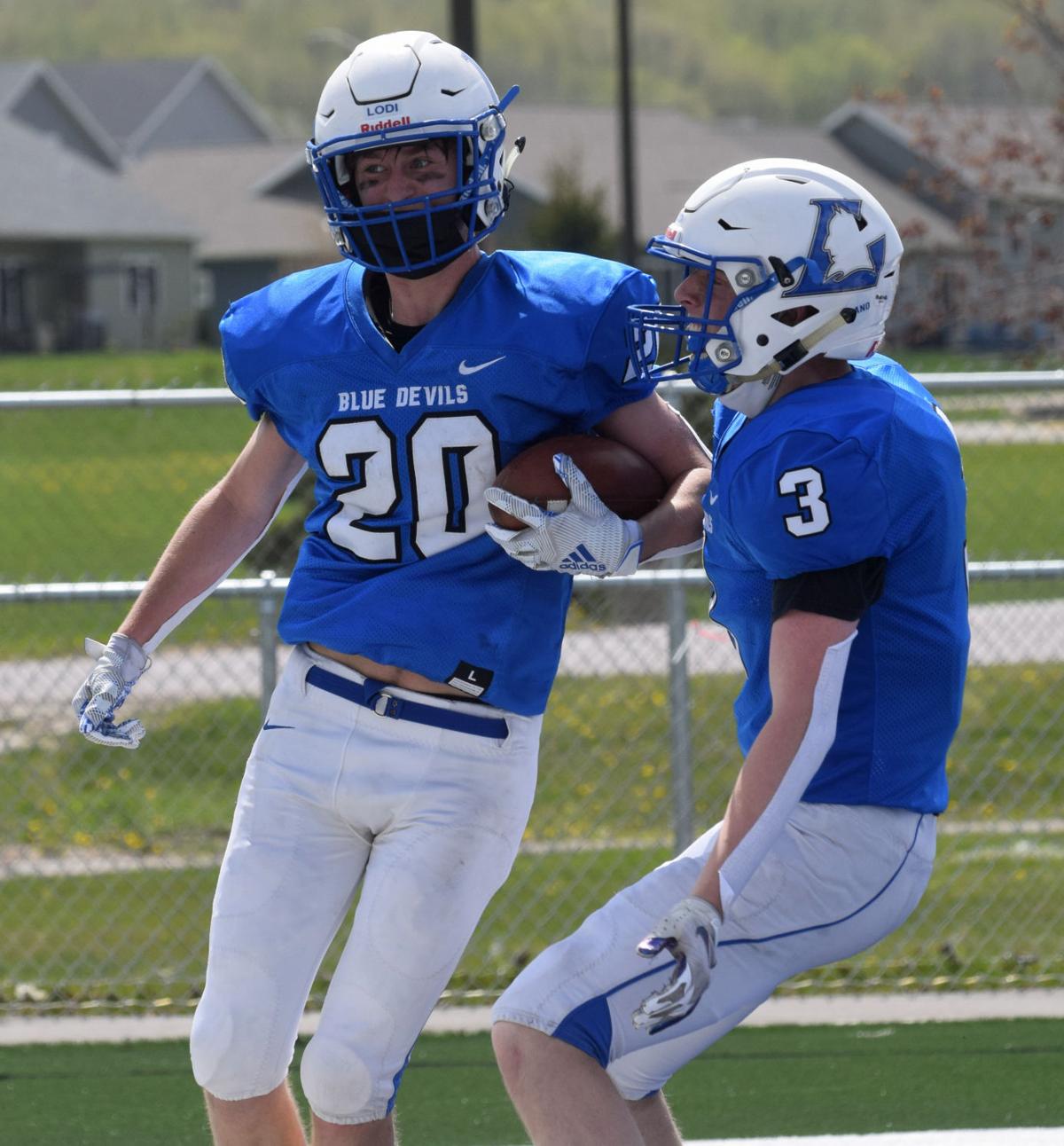 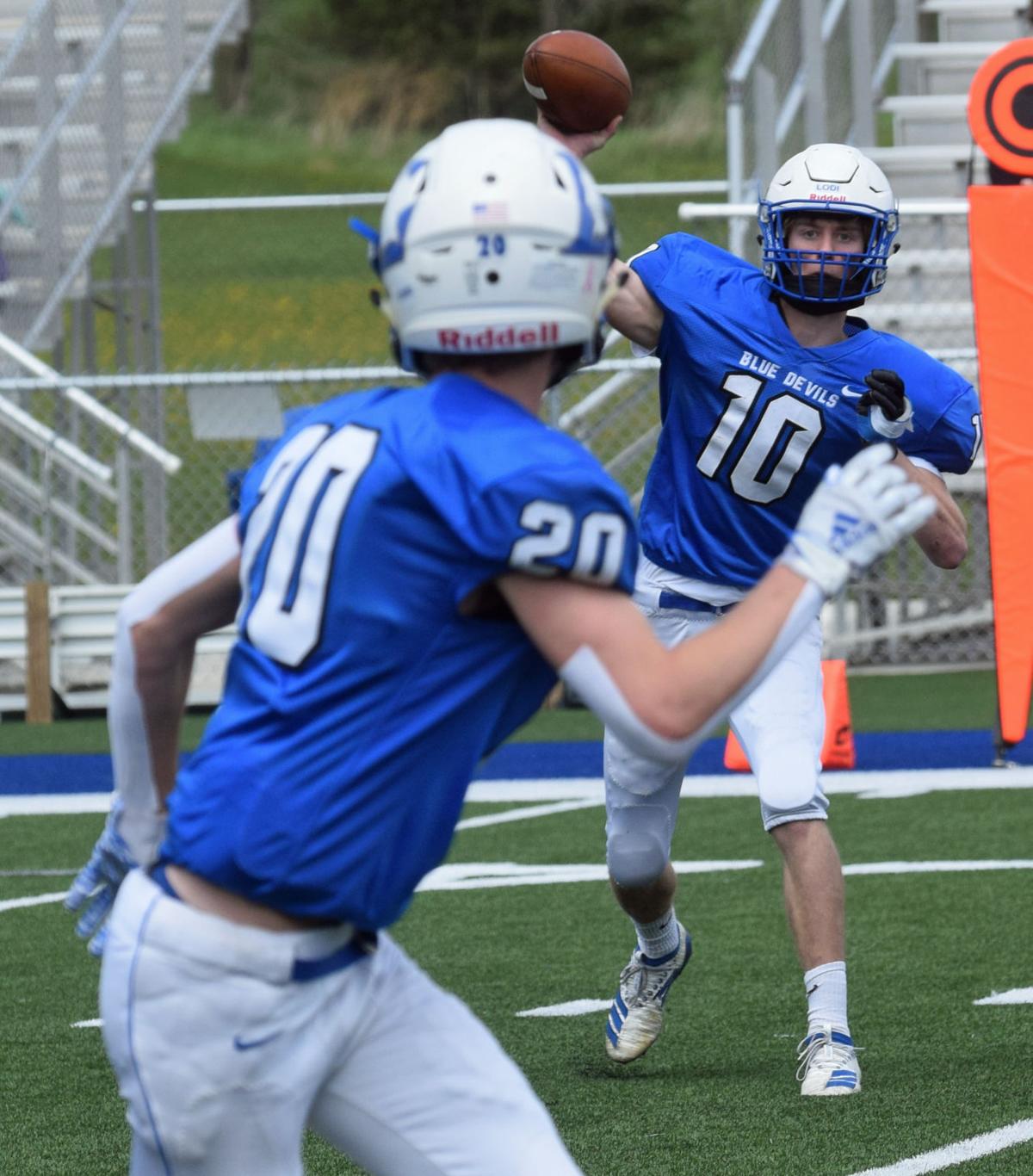 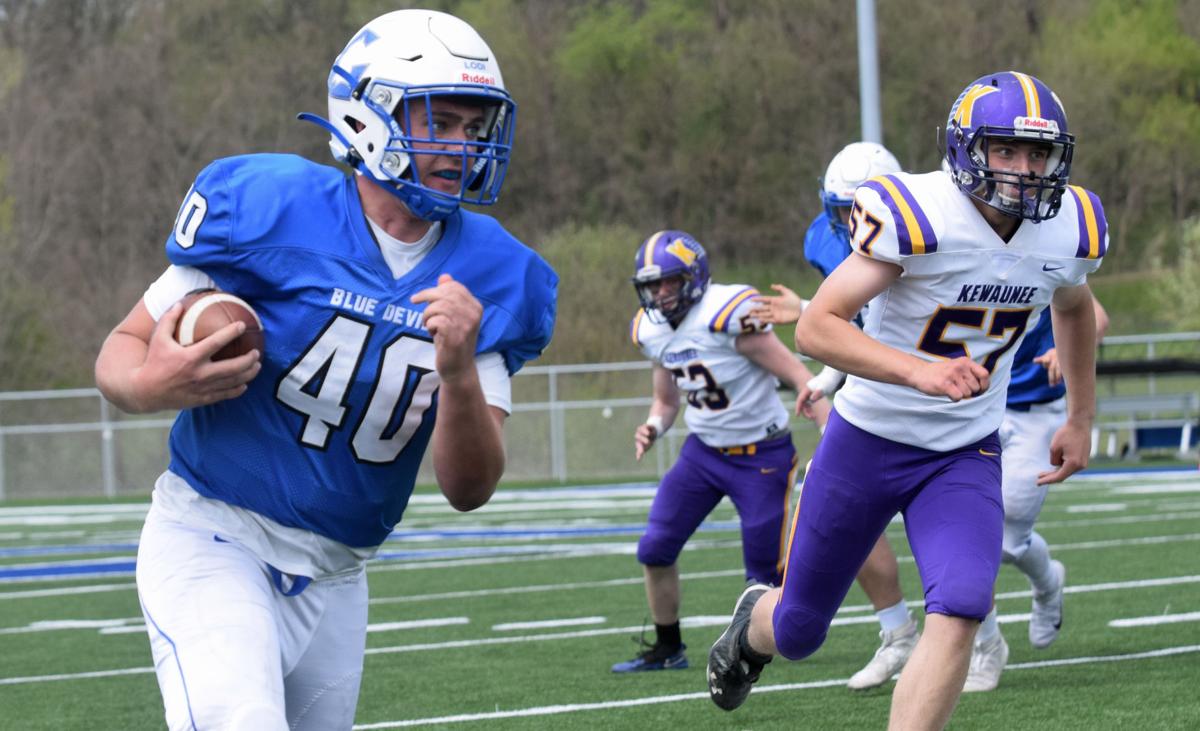 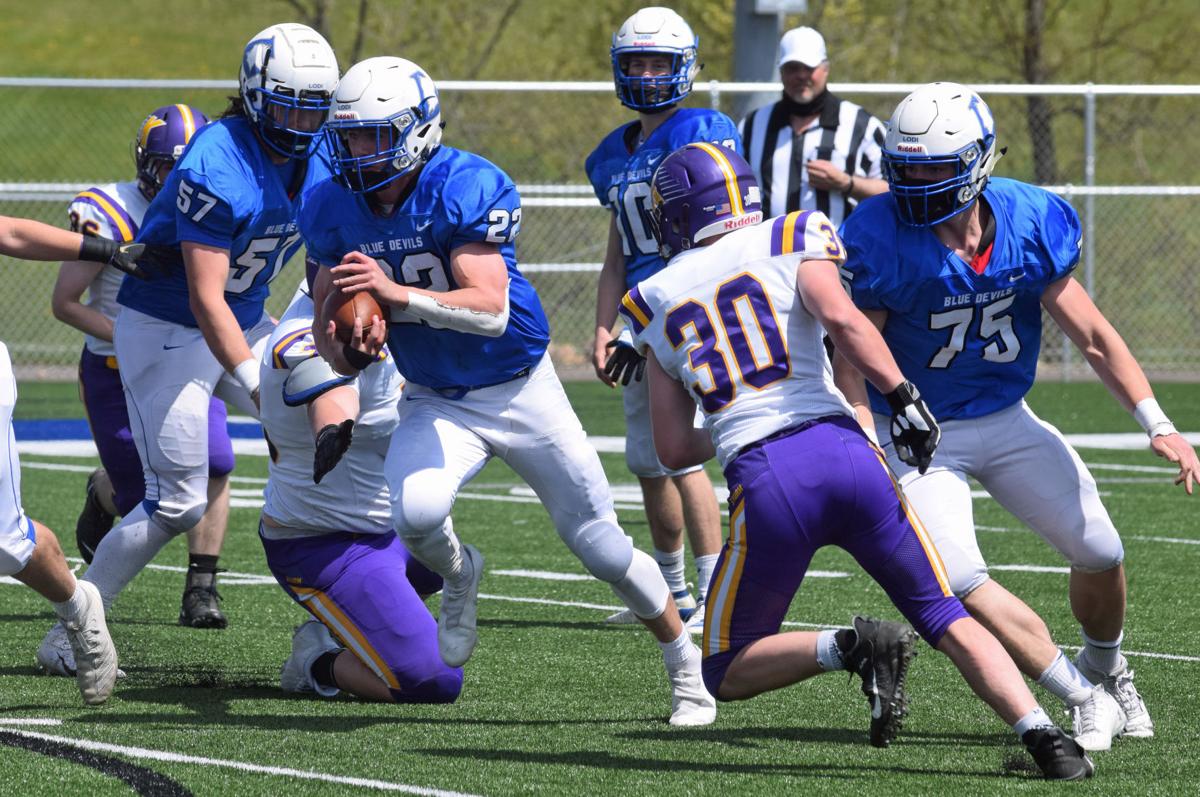 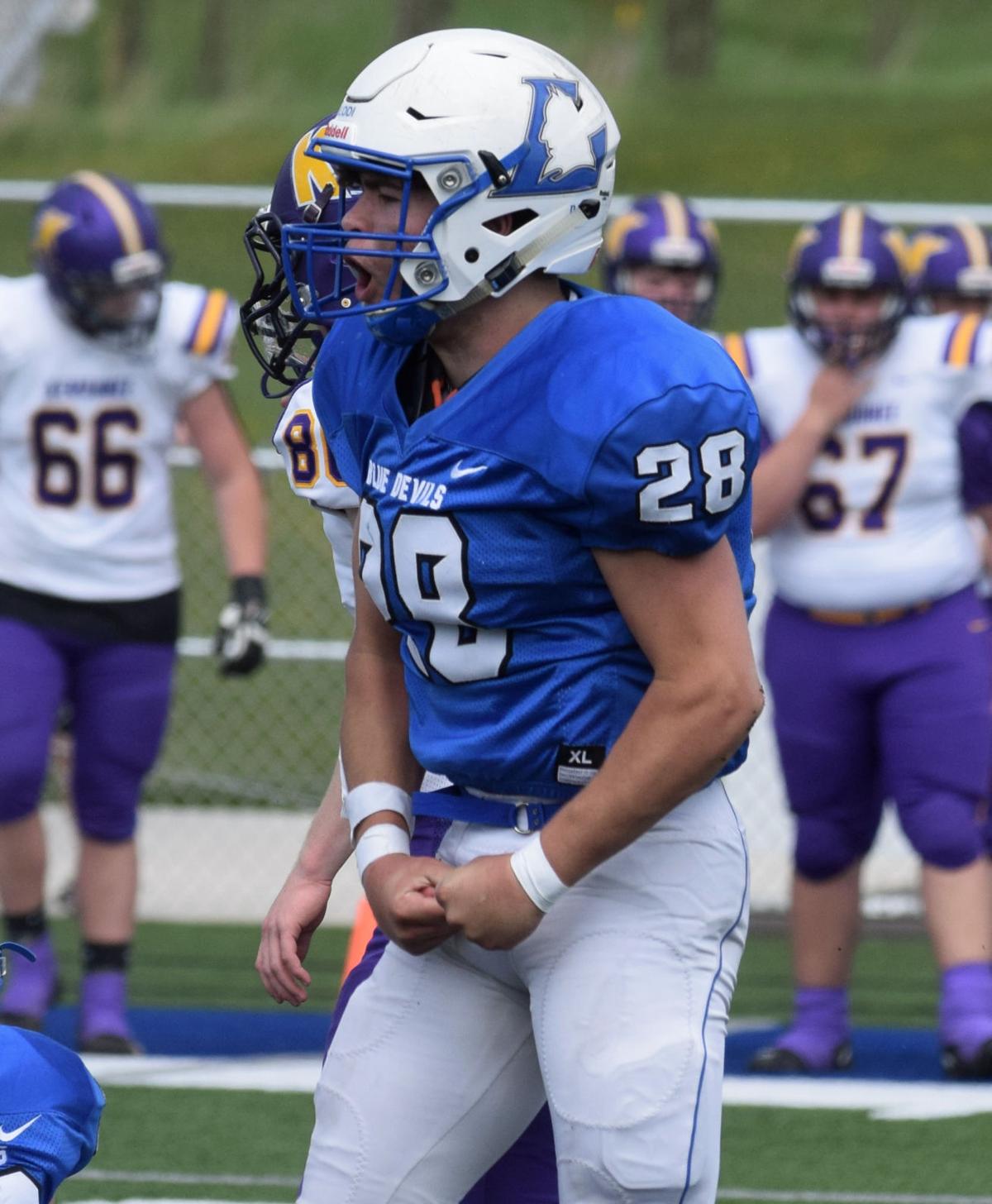 LODI — When it comes to a game of catch, things are a little more personal for Quinn and Connor Faust.

The senior twin brothers are the only set of siblings on this year’s Lodi prep football team and the quarterback-wide receiver “Brother Connection” has been a staple of the Blue Devils offense throughout the alternate fall season.

Before continuing that tandem next fall as part of the UW-Eau Claire football team, the Faust brothers took to the Lodi Stadium field on Saturday with their other 35 non-blood brothers on the Blue Devils squad with one thing in mind: perfection.

Lodi delivered just that, using a 34-point second-half to surge past Kewaunee for a season-ending 40-6 non-conference win at Lodi High School.

“I think it was really special. Once we got that fall season taken away, we were just hopeful for any games at all. We were blessed with these six games and the undefeated season was just the cherry on top of the cake,” Quinn Faust said.

“We loved it. We just went out there and played, had fun and had each other’s backs. To end with no losses is even better.”

“It’s really special. I can’t tell you how proud I am of these seniors for everything they’ve gone through,” Lodi coach Dave Puls added.

Quinn Faust threw for 132 yards and two touchdowns on 12-of-19 passes while junior Lucas Heyroth rushed for 108 yards and two scores to help Lodi finish off an unbeaten alternate fall season at 6-0.

Finishing off their perfect season wasn’t easy however, as the Blue Devils were locked in a dogfight with the Storm (2-4) with just a 6-0 lead at halftime.

The Blue Devils scored three touchdowns in the third quarter and added two more to ultimately put a running clock into effect just past the midway point of the final stanza.

Garrett Edge helped get things started as he capped off the Blue Devils’ opening eight play drive of the second half. After hauling in a 16-yard pass to set up fourth-and-5 from, Edge took a short pass from Quinn Faust and plowed in from five yards out with 8 minutes, 23 seconds left in the third quarter before Chandler Curtis tacked on the extra point for a 13-0 lead.

The brother connect then found paydirt after the Blue Devils defense forced its third turnover of the afternoon. After trading punts, Lodi’s Cody Doyle undercut a pass by Kewaunee’s Mitchell Thompson at the Storm’s 31-yard line with 4:31 to go in the quarter.

Four plays later, Connor Faust hauled in a two-yard TD pass from Quinn Faust at the 2:59 mark for a 19-0 lead.

“Obviously it’s a team effort and we have to score on offense and we have to do the right thing on special teams, but having that defense out there, doing what they’re doing (is huge),” Puls said.

“It’s an entire team effort and I couldn’t be more proud of what these boys have done.”

Lodi continued to keep the foot on the gas as they forced another punt, and after a Curtis 34-yard return off a muffed punt set the Blue Devils up inside the Storm red zone, scored just two plays later on an Edge one-yard plunge for a 26-0 lead with 47 seconds left in the quarter.

The Blue Devils defense continued to haunt Kewaunee in the fourth quarter forcing a turnover on downs and a punt on its first two drives. Heyroth scored off the turnover on downs, plowing in from three yards out with 8:53 to play after setting up the score with a 31-yard scamper.

Quinn Faust later capped things off as he raced in from 42 yards out on the fourth play following the punt for a 40-0 lead with 5:36 to play. The Blue Devils signal caller rushed for 70 yards on eight carries, while Edge hauled in a team-high five catches for 65 yards.

While he admitted the move to the shotgun and spread-oriented offense was difficult, Puls said it’s been easier with the athletic ability of Quinn Faust. The future Blugolds QB gave all the credit to the hogs up front.

Speaking of the defense, Lodi forced a pair of turnovers and held the Storm to just 159 total yards, including 62 rushing on 36 carries. The Blue Devils nearly pitched their second shutout of the season as well, before Thompson found Mitchell VanGoethem on a four-yard pitch-and-catch with 34 seconds to play.

Regardless, it was nothing unexpected according to Connor Faust.

“That’s our standard on defense; that’s what’s expected of us and what coach Mack expects of us every single time,” he said. “You feel good about it, shutting them out or getting close, but that’s our goal every single time.”

Before Lodi surrendered the lone Storm score, Puls and the coaching staff gave the team’s 11 seniors one final send off as the entire group played one down on defense together before walking off arm-in-arm.

After missing the fall season this year, it was a special memory for the group to share in on the school’s new artificial turf field they and their parents played such a pivotal role in helping making a reality.

“This team’s parents were the people that really brought it forth. If they wouldn’t have done it and got it done before the COVID-19 (pandemic) hit, it would have never happened,” Puls said. “I’m just beyond words on the seniors, all the kids in our program and all the parents and families in our program.

The memories are just beginning for the Faust twins however, as the pair will join teammate Ethyn Meyer at UW-Eau Claire this fall. Connor Faust initially was committed to play at UW-La Crosse but ultimately opted to join his brother as a Blugold.

“It’s special enough to get to play with my brothers in high school, but to figure out he was coming,” Quinn Faust said. “We kept hearing all season long ‘The Brother Connection,’ so that’s going to keep going on in college.”

“It obviously makes the drive a little easier for the parents,” Connor Faust added with a chuckle. “I couldn’t be more excited for that. I can’t wait to keep catching passes from him for the next four years.”

The Lodi football team has looked like a machine so far in the alternate fall season.

After dominating the makeshift Rock Valley Small Conference and its list of all-league selections in the alternate fall season, the honors kep…

The Lodi football team's 11-man senior class walk off the field, arm-in-arm for the final time together during Saturday's non-conference game against Kewaunee at Lodi High School.