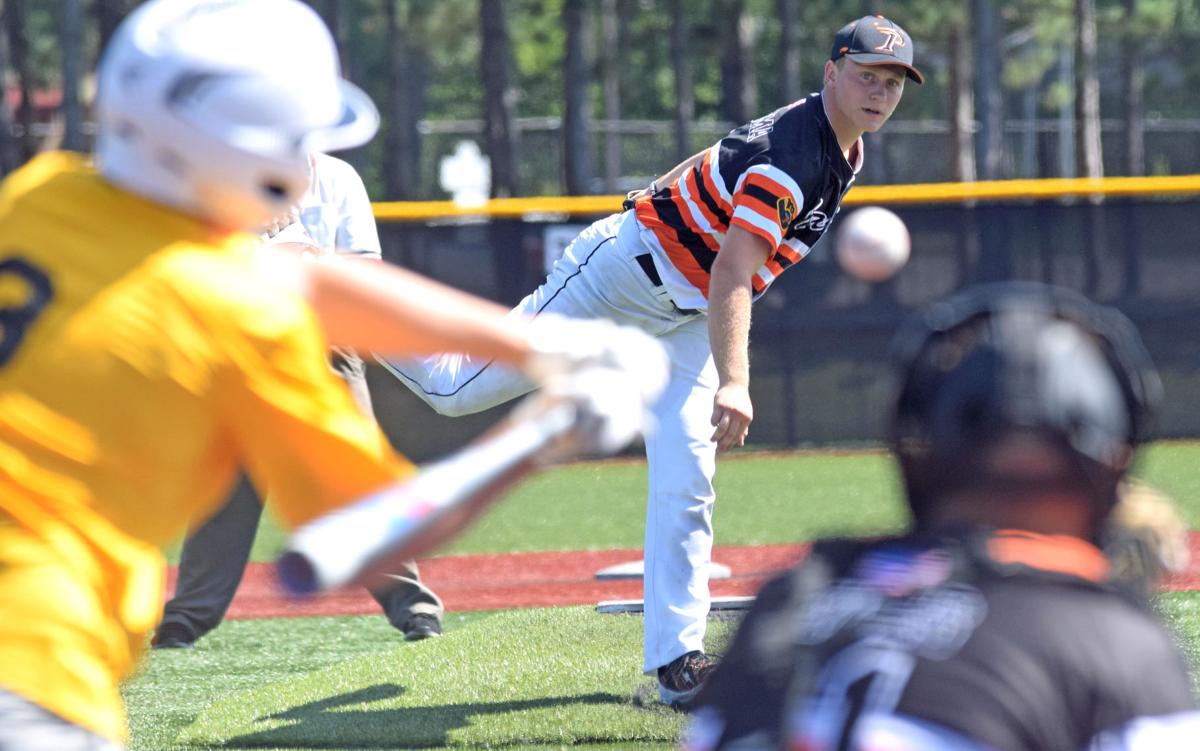 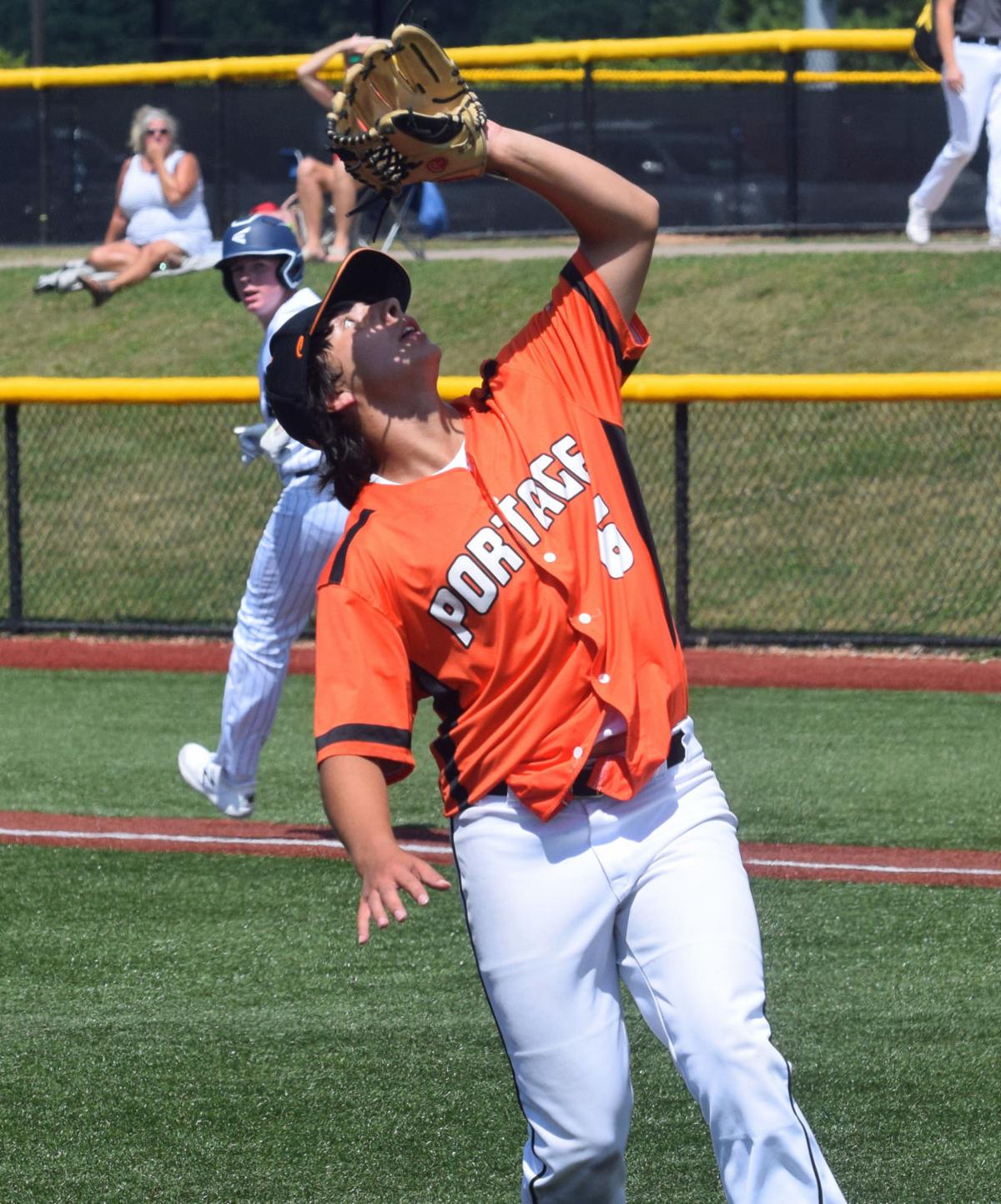 Portage junior Brett Owen charges in to make a catch on a pop fly during a game against Nekoosa during the Woodside High School Summer League Tournament on Wednesday at Woodside Sports Complex in Mauston. Owen and the Warriors' JV team went 0-2 on Wednesday to finish the group play portion of the three-day tournament at 0-3.

MAUSTON — The Portage varsity baseball team had been riding high throughout its stint in the Woodside High School Summer League, finishing the regular season a perfect 10-0.

While that unbeaten stretch came to a close on the second day of the season-ending, three-day tournament Wednesday, it couldn’t keep the Warriors out of the playoff series. Despite falling to rival Baraboo, 2-1, the Portage varsity squad earned the No. 3 seed in Thursday’s playoffs.

The Warriors will meet second-seeded Milwaukee Pius in a semifinal game at 10 a.m., with the winner advancing to the championship game at 3 p.m. on Thursday afternoon. Portage (12-1 overall) was one of five teams to finish with a 2-1 record in three group play games, but was awarded the No. 3 seed due to only allowing two runs.

Viroqua and Pius each finished a perfect 3-0 group play, but the 138ers allowed just three runs to the Popes’ seven.

Portage’s stellar pitching and defense has been at the heart of their success and was on display again in Wednesday’s opening 13-0 shutout win over Royall in five innings. After grinding out a 5-0 win over Adams-Friendship in Tuesday’s tournament-opener, the Warriors bit the Panthers early.

Portage pushed across four runs in both the first two innings for a quick 8-0 lead. The Warriors kept the pedal down with a five-run fourth as senior Colton Brandsma did the rest on the bump. The hard-throwing righty got after Royall batters early with 13 first pitch strikes, allowing just one hit with five strikeouts in the complete game victory.

Seniors Kendal Thomson, Brett Walker and Matthew Miles led the way for Portage with two hits apiece, with Miles, Thomson and junior Kyle Stratton each contributing a pair of RBIs.

Portage failed to create the same kind of offense in its final group play game however, suffering a 2-1 loss to the Thunderbirds. Baraboo struck first with a run in the home half of the opening frame, but Warriors starter Ryan Schultz settled in from there as the senior followed with three scoreless innings.

Portage ultimately got on the board and pulled even with a run in the top of the fifth on an RBI hit by senior Delnato Sheppard Jr., but the momentum didn’t last. Baraboo answered right back in the bottom of the inning and the Warriors were unable to strike again, stranding a pair on in the top of the seventh.

Schultz struck out three in four innings of work while senior Ethan Bauer picked up the loss as the two combined to hold Baraboo to six hits. Portage mustered six hits as well, including a triple by Miles, but was kept without a multi-hit batter.

If Portage can topple the Popes in Thursday’s semifinal, it will face either Viroqua or the winner of Thursday’s play-in game between fourth-seeded Wautoma and No. 5 seed Montello.

Portage JV kept out of the win column

Unlike the Warriors’ varsity squad, the Portage JV team was unable to advance onto the playoff series, going 0-3 in the season-ending tournament.

The Warriors JV group entered Wednesday at 0-1 following an opening loss 12-1 loss to Pius, before suffering defeats at the hands of Nekoosa and Viroqua on Wednesday.

In the opening game against the Papermakers, the Warriors battled throughout but failed to overcome an early deficit en route to a 6-2 loss. Nekoosa post three runs in each of the first two innings for a commanding 6-0 lead.

Portage battled however, keeping the Papermakers from rolling up the score the rest of the way. The Warriors cut into the lead with a run in the top of the third and pulled within 6-2 with a run in the fifth, but Portage failed to get all the way home.

The Warriors again got roughed up early in its second game against the 138ers, falling behind 12-1 through the first two frames en route to a 19-1 loss in five innings.

Portage hung around through the first stanza, trailing just 3-1 after one. Viroqua opened things up from there with nine runs in the second before hammering things home with a run in the fourth and six in the fifth. The Warriors didn’t’ do itself any favors however, committing six errors.

Junior Hayden Steinle struck out three in three innings of work for the Warriors in the lopsided loss.

Photos of the Portage varsity and JV teams competing on the second day of the Woodside High School Summer League Tournament on Wednesday, July…

With 11 returning seniors, plenty of skill and lots of optimism, 2020 looked to be a promising season for the Portage prep baseball team.

MAUSTON — When the opportunity to compete in the Woodside High School Summer League arose for the Portage baseball team, it competed with one …

Portage junior Brett Owen charges in to make a catch on a pop fly during a game against Nekoosa during the Woodside High School Summer League Tournament on Wednesday at Woodside Sports Complex in Mauston. Owen and the Warriors' JV team went 0-2 on Wednesday to finish the group play portion of the three-day tournament at 0-3.