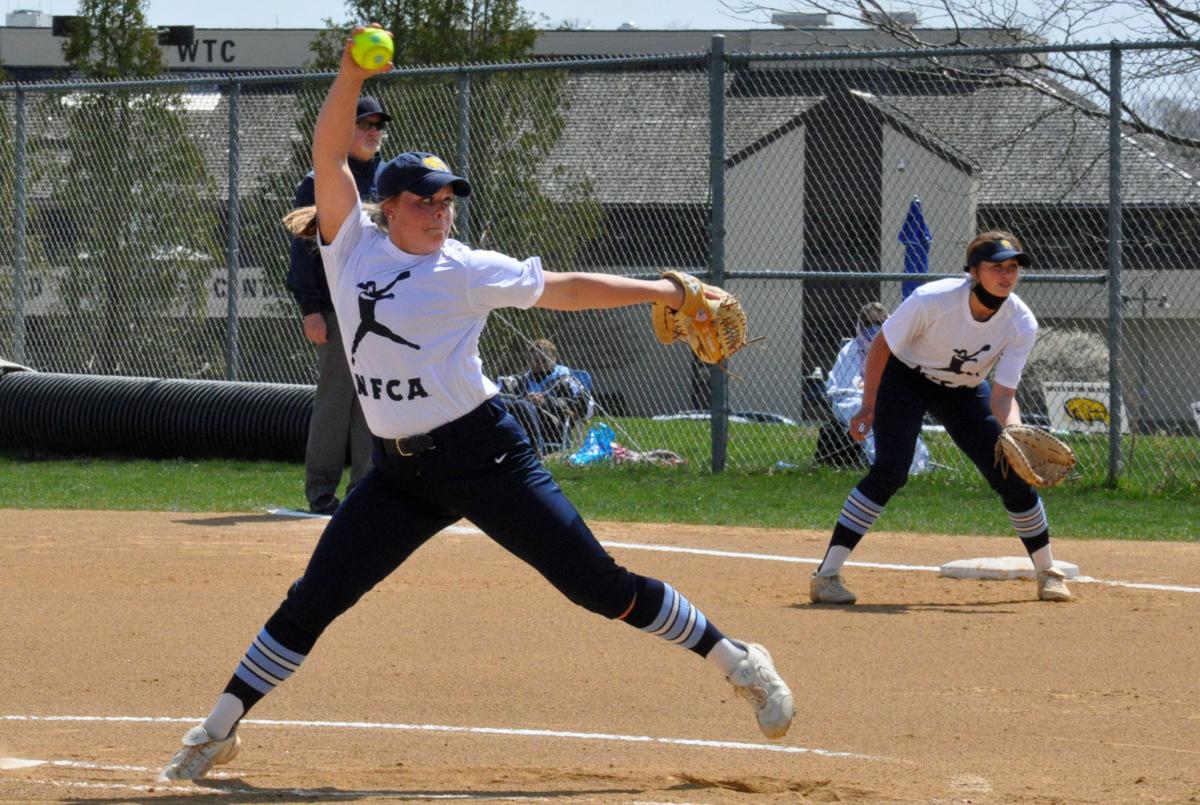 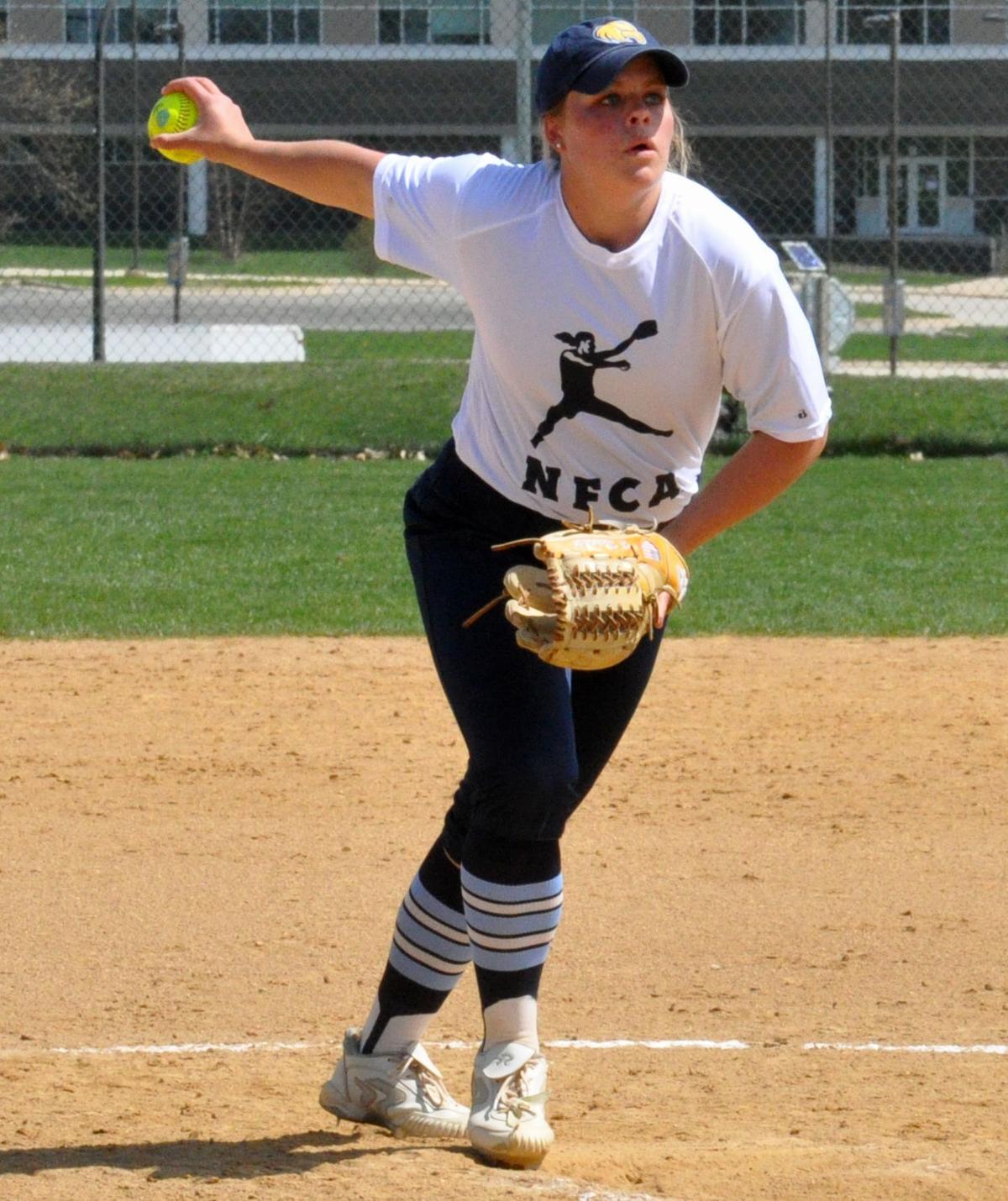 Hockerman made 26 appearances, including 20 starts, while compiling a 12-3 record. Over 77 innings pitched, the freshman right-hander allowed 36 earned runs on 60 hits with 40 walks and 89 strikeouts (8.09 strikeouts per seven innings), good for a 3.27 earned run average.

Life as the sole pitcher on a softball team can feel like you’re on a desert island, secluded in the pitching circle.

It’s a feeling that was all too familiar for Hannah Hockerman.

During her sophomore and junior seasons at Westfield, she was the primary, and virtually only, arm for the Pioneers. Hockerman’s days as an offshoot Chuck Noland from Cast Away are long behind her now, however, as she’s just one cog that makes up the machine that is the Rock Valley College pitching staff.

While seeing her innings diminish and sharing appearances was a major change for Hockerman, it’s one she took in stride. In fact, her new position played a pivotal role in helping the Golden Eagles recently capture the National Junior College Athletics Association Division III national championship.

“It was crazy. It kind of felt unreal and it didn’t really sink in until the second day, but it was just a really great experience and definitely a moment I’m never going to forget,” Hockerman said in a recent phone interview.

The top-seeded Golden Eagles went a perfect 4-0 in the eight-team tournament at Carrier Park Field of Dreams in Syracuse, N.Y., punctuated by a 13-2 rout of second-seeded Corning on May 30 for the program’s unprecedented seventh consecutive title.

That success was just part of why Hockerman elected to attend Rock Valley College over a handful of other suitors, ranging from fellow junior college schools all the way to NCAA Div. I programs. Hockerman, who admitted she’s “very selective with my major,” as she wants to pursue a degree in agricultural education and dairy science, said that RVC provided just that, as well as a chance to take her softball game to the next level.

Fitting into a new role

While joining the Golden Eagles program was a home away from home, it didn’t come without some changes. Chief among them being the fact Hockerman was coming into an elite pitching rotation.

Having been the bona fide start during her final two years — would have been three if not for the COVID-19 pandemic wiping out the 2020 spring season — with the Pioneers, entering an already deep pitching staff was definitely a culture shock for Hockerman.

“It was definitely a mindset change, knowing that I had a staff to work with and that I could be utilized strategically, instead of alone,” she said. “Instead of just me, we have a multitude of pitcher who all have their own specialties, so depending on what kind of team we faced, we have a couple good lefty pitchers that throw junk.

“I was more speed, and that was really helpful knowing we could be able to strategize our lineups against who we play, based on our pitching staff.”

The freshman right-hander made 26 appearances, including 20 starts, while compiling a 12-3 record. Over 77 innings pitched, Hockerman allowed 36 earned runs on 60 hits with 40 walks and 89 strikeouts (8.09 strikeouts per seven innings), good for a 3.27 earned run average.

While the numbers were no surprise from the former All-State selection, Hockerman’s game evolved with her movement and velocity. In the fall, Hockerman said the team tracked spin rotations and graphed speeds. When tested near the end of the year, Hockerman said her “spin rotation increased by like eight or nine movements per second, and that’s quite a bit.”

And after being such a dominant power pitcher, she worked extensively with head coach and pitching coach Darin Monroe on her location and getting opposing batters to chase pitches off the plate.

“This year, it’s been working really well, but with a lot of the hitters we face, I developed a drop curve and that was my go-to this year,” she said. “It worked really well and it was really cool to see it develop, because it wasn’t a pitch I relied on, at all, in high school.

“That was definitely something I thought was really cool, moving pitches and now being able to locate them specific lengths or spaces off the plate to get people to chase in certain counts.”

While she was thrilled about the growth she saw in her own game, Hockerman also enjoyed following along with some close friends turned adversaries on the field. During travel ball, Hockerman used to play alongside former Portage and Poynette stars Brianna Brandner and Casey Fountain, who helped lead Madison College back to the NJCAA Div. II national tournament.

While the Golden Eagles and WolfPack are rivals on the field — Rock Valley College won four of the teams’ six meetings this spring — it was enjoyable seeing some close friends succeed.

“It was really cool and definitely competitive... but it’s really fun and I love the atmosphere; we treat Madison College as a rival, but at the same time we love to see them excelling,” Hockerman said.

Another close friend on and off the field has helped fuel Hockerman’s desire to play at the next level. Former Portage standout Alli Walker turned in a fantastic freshman season for Madison College in 2018, earning North Central Community College Conference MVP honors and leading the WolfPack to the NJCAA DII tournament, leading to a scholarship spot at Michigan State.

Hockerman, who lives on her family’s dairy farm in Westfield, said she and Walker are close through their families and have shown cows together at the Wisconsin State Fair. That friendship carried over into softball and has inspired Hockerman to pursue her dreams.

“I kind of took that into consideration like, ‘She started here and look where she ended up.’ She’s been a great role model for me,” Hockerman said, noting that Walker’s pursuit of a degree in animal science has only strengthened her drive to play at the next level. “The major we’re in, it requires a lot of science (courses) and labs, so knowing that she was able to balance the workload with softball was definitely encouraging. And the fact that she went to a major Big Ten school, that was really cool and very encouraging.”

While her field of study is pretty specific, Hockerman has been doing her homework for quite a while, since eighth grade in fact. Among the schools she’s looked at include Wisconsin, Michigan State, Illinois State, Iowa State and North Dakota State.

And while she knows there are no guarantees, Hockerman said “there are definitely a lot of options out there, especially in the Midwest.” In the meantime, she’s just excited to get another chance to improve for Rock Valley College next spring and become the main piece in the Golden Eagles’ pitching machine.

“It’s something I’m working towards next year; being that No. 1 and the go-to,” she said.

Hockerman made 26 appearances, including 20 starts, while compiling a 12-3 record. Over 77 innings pitched, the freshman right-hander allowed 36 earned runs on 60 hits with 40 walks and 89 strikeouts (8.09 strikeouts per seven innings), good for a 3.27 earned run average.