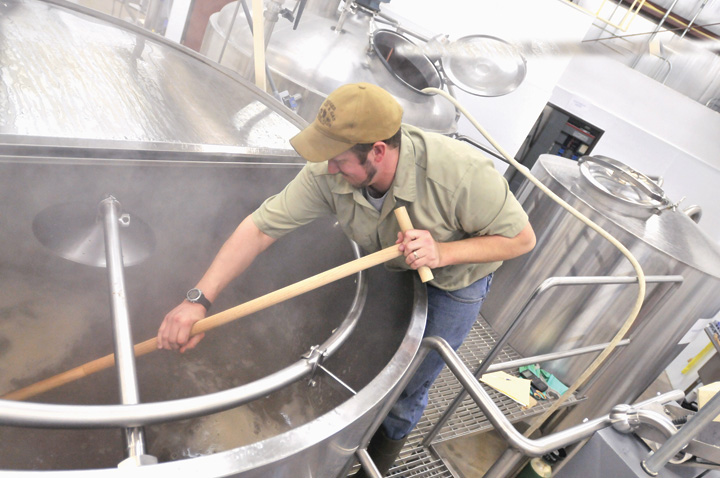 Tanner Brethorst mixes during the beer-making process at his new Port Huron Brewing Company in Wisconsin Dells. The brewery will be the first in Columbia County to make beer since Eulberg's in 1958. 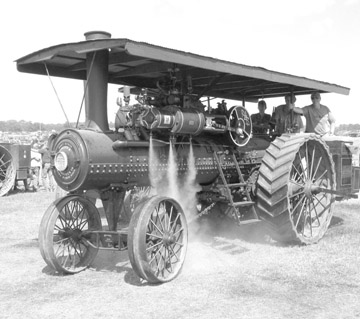 Tanner's grandfather, Wilfred "Bill" Brethorst," grew up using Port Huron steam tractors and one has been in the family for about 60 years. 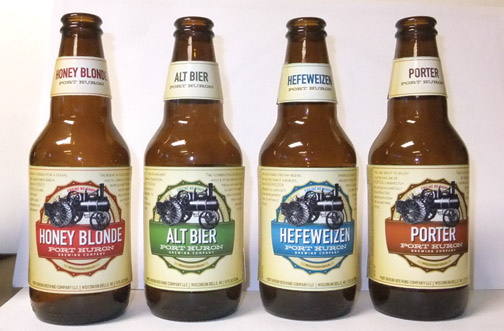 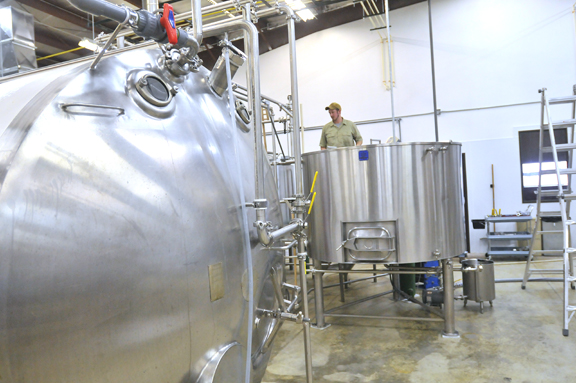 As steam drifted up from the giant metal tank, Tanner Brethorst stirred with anticipation.

In just a few weeks he hopes to extend a family legacy that started with his grandfather.

"They are all beers I like," he said, taking a break from perfecting a second batch of his new brew.

Here's the twist: His grandfather was never a brewer, and the legacy does not revolve around beer. His grandfather's Port Huron steamer, a once mighty tractor that's been in the family 60 years, is about to get new life.

"It's a big hunk of metal and it's really cool. Takes three hours to fire it up to pressurize," Brethorst said.

At his brewing facility in Wisconsin Dells, Brethorst showed off the tractor that's become an inspiration of sorts.

He talked about how it's running as well as the day it came off the assembly line almost a century ago.

And he talked about how members of his family don't consider themselves owners of the steamer, but caretakers.

"Some guys drive race cars. Some do sports, I have fun running around on a machine that goes 2 mph," he said, picking up the giant Port Huron tractor in his hands - taking a closer look at its picture that's now on his beer labels.

In February, Brethorst hopes to do something that hasn't been done in Columbia County since 1958 - operate a brewery.

Brethorst, who grew up in Lodi, has already started crafting beer at Port Huron Brewing Company, with plans to bottle and keg beer that will be available at local establishments.

"I've done all my brewing around the Madison area, and Madison is pretty saturated with small breweries. We hatched this idea that we wanted to find a place that would have the ability to support a small brewery like this," he said.

In his first year, Brethorst will make four styles of beers, with plans to roll out seasonals in the future.

A process that started off as a funny family suggestion has taken more than a year. But with the help of family and friends, Port Huron is about to become the new beer on tap.

Brethorst said he is ready for the day when he can walk into a place and order his own beer.

"This thought has gone through my mind a few times," he said. "What's it going to be like? I don't know ...

"Maybe I'll go buy a glass and tell everybody at the bar, ‘This is really good stuff.'"

Home brewLike almost any college student in Madison, beer was a part of life for Brethorst.

He decided to take that party elixir one step further and try making his own in 2002 with a home kit. The following summer he took on a job at Tyranena Brewing Company in Lake Mills to get an introduction to the trade.

"It was a hard summer, but I must have liked it enough to stick around," he said. "There's not a lot of easy stuff about (brewing). It's hard work. Sweat."

Brethorst said he was naive when he entered the brewing world, asking all the usual dumb questions. But everyone has to start somewhere.

After brewing school, Brethorst found work at Lake Louie, a popular small brewery in Arena where he stayed four years. "It was awesome. A little daunting because it was the real deal," he said.

After that he spent three years working at Capital Brewery in Middleton.

"(Port Huron) is about the size of Lake Louie. Capital, their tanks are monstrous. A completely different world," he said.

While he worked for popular breweries, Brethorst said one question was always in the back of his mind: Could he do this on his own?

A family brewPicking up heavy bags of malt, Dan Brethorst took a few steps up to the brewing area to help Tanner start the process. Dan is just one of the family members - an uncle - who has helped in this dream.

"Proud of him, more than anything. I give him a lot of credit. He's not afraid to jump into anything," Dan said.

The younger Brethorst has made beer for his family to try for years, and a suggestion from his uncle Bruce McPhee turned into a serious business proposal. Now, friends and family have backed the business through money and volunteer work to get Port Huron up and running.

"This is a family-owned business. We have a lot of people in the immediate family who are good at this. My dad (Dave, an engineer) drew up all the plans so the city could sign off on them."

His uncle Dan's background is in facilities management, so he helped on the renovation of the building to make it into a brewery.

They purchased brewing equipment in Milwaukee, but there was a small leak in the kettle, which was basically sliced in half to fix.

With a website in the works and chatter on Facebook, word is getting out about the new brewery, which Brethorst said has everyone excited.

"I think it's exciting. I don't know. It's a different kind of pressure. You want to succeed just for the sake of succeeding," he said.

All he needed was the perfect name.

Off BroadwayThere's no bustling downtown traffic or T-shirt shop nearby. It's not as if that was a requirement, though. The calm location of the brewery seems to fit Brethorst well.

Port Huron Brewing is just a few minutes from the busy downtown streets of the Dells.

When he started looking for a location, Brethorst said Reedsburg was considered, but they found a 7,000-square-foot facility in the Dells Industrial Park just off Broadway Street and Highway 23 that fit the needs with wide-open space.

"The city was really nice. When we pitched them this idea, they didn't have a problem with us putting a brewery out here. But having a tap room was a sticking point," Brethorst said.

Retail was not zoned for an industrial park. But the city rewrote some language, allowing Port Huron to sell its own product four days a week.

While getting the brewery going, Brethorst said there was never any doubt what it would be called.

"It's a family-run brewery, and the steam engine (is something) we show every year at the Badger Steam and Gas Show. That's something that our family gathers around, brings us all together.

"So let's call it Port Huron and put our steam engine on the label.

On the brewery mapWalking into the tasting room, the place feels like it should be in Europe.

The hand-made tables are stout and long, ready for beer to be spilled over them. And the long bar sits in front of windows where you can see beer getting made.

With Port Huron memorabilia soon to decorate the walls, every aspect of creating this brewery has been done with family and friends in mind.

And Brethorst wants people who come to the brewery to feel as though it's their place, as well. Their local brew.

"My goal is to get that local contingent. Get the local folks in. We want to be their brewery," Brethorst said. "I don't want to exclude anyone and have them think this is a tourist trap. That's not it. This is your hometown brewery. Come and hang out here."

Those numbers were about the same at the turn of the 20th century - before Prohibition devastated the industry.

Beer companies once dotted small towns like Portage - with Eulberg's ending in 1958 - and Effinger in Baraboo, which stopped production in the 1960s. Reedsburg also had a brewery.

But the industry has changed. Now, many breweries are tied to restaurants as brew pubs, which make up more than 1,000 of the craft breweries in the nation. Dells Brewing Company at Moosejaw and Sprecher's in the Dells have restaurants.

Brethorst is strictly operating as a brewery, right down to his bottling line.

The four styles Port Huron will make - a honey blonde ale, a German hefeweizen (wheat beer), a robust porter and a German alt (amber) beer - are all recipes Brethorst has worked on for years, and are his favorites.

"And then we'll start branching off with seasonals, and specialty beers where we can get a little crazier," he said, which will include a spring, two summers, a fall and winter offering.

With his seasonals, Brethorst said he would love to find a local farmer to grow a field of wheat or barley for him.

"And then we would take the old steam engine out there and process that grain," he said.

Brethorst is aiming for 800 barrels in his first production year, which could climb to 1,200 if demand is sufficient.

While he's technically Port Huron's only employee, on bottling days, Brethorst said he will have plenty of help.

"I will take some volunteers. My dad and uncles and a

Where: Port Huron Brewing is located at 805 Business Park Road in Wisconsin Dells. At the intersection of Broadway (Highway 23) and Highway 16…

Tanner Brethorst mixes during the beer-making process at his new Port Huron Brewing Company in Wisconsin Dells. The brewery will be the first in Columbia County to make beer since Eulberg's in 1958.

Tanner's grandfather, Wilfred "Bill" Brethorst," grew up using Port Huron steam tractors and one has been in the family for about 60 years.