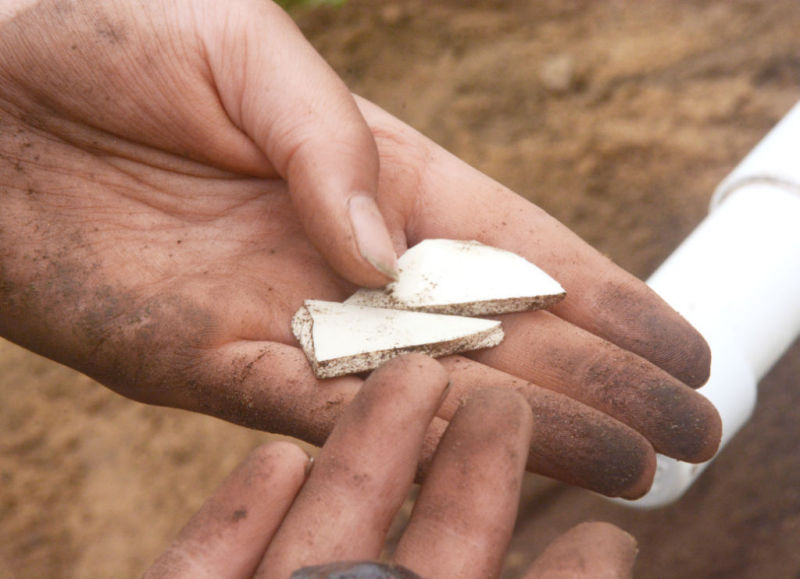 Every little shard is a piece of history. Madison Hinton holds her discovery, in the dirty hands that she used to dig for it. 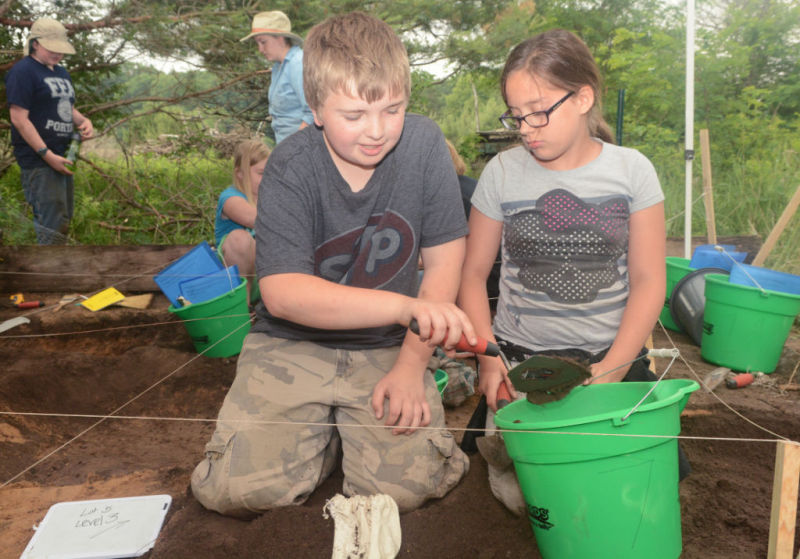 There are a lot of "eureka" moments in a simulated archaeological dig during the Historic Indian Agency House's archaeology camp. Isaac Severson, 11, of Rio, and Madison Hinton, 11, of Oxford, happen upon some shards that could be significant artifacts.

Rachel Stieve has heard that a lot this week at Portage’s Historic Indian Agency House.

Her response: “Did you mark down how many centimeters you dug?”

At Archaeology Camp, digging in the dirt is on the schedule of activities, every single day, unless it’s pouring rain.

Stieve, who holds a bachelor’s degree in archaeology and anthropology from the University of Wisconsin-Madison, is the camp’s leader, and mentor to the 12 youngsters, all going into sixth or seventh grade next fall, who won their way into the camp by writing an essay titled “Why Archaeology is Important.”

“What we saw from all the essays is that the students have an understanding of what archaeology is,” Stieve said. “But when they get here, they find out what it’s really about.”

Destinee Udelhoven, executive director of the Historic Indian Agency House, said the dig is a simulated one, in a raised bed of dirt where she and Stieve hid artifacts from the Ho-Chunk people, from the 1830s, when Indian Sub-agent John Kinzie and his wife Juliette lived and worked in the house, from Fort Winnebago, and from the modern era.

Campers, working in pairs, are assigned a one-meter square of dirt where they dig – saving the upturned soil in buckets, so they can sift through it later to find other artifacts.

Paul DeJesus, who’s helping with the camp, invited Olivia to consider what the story behind the cup might be. Did it belong to Juliette Kinzie? If so, how did she acquire it? Could she have gotten it in trade, from French fur trappers traveling on the Wisconsin and Fox rivers?

Stieve said a key aspect of the archaeology camp is learning how to form a hypothesis, then testing that hypothesis with the evidence found at the dig.

All the camp participants toured the Historic Indian Agency House – built in 1832, and listed on the National Register of Historic Places for national significance – before they started digging, so they know something of the house’s story.

The house was, in essence, the U.S. government’s embassy to the Ho-Chunk Nation. John Kinzie spoke the language of the indigenous people, and conducted business at the home in addition to living there.

Ryan Suchow, 12, of Pardeeville, rattled off just some of the things that the students had found in the dirt.

“Magnets,” chimed in Lydia Tomlinson of Pardeeville, who was working with Ryan at the “wash” area, writing down what was found, and where.

Ryan said that, as of late Thursday morning (the camp ends today), the young archaeologists had found most of the pieces of a porcelain sugar bowl – in different spots in the digging area – and had glued some of them back together. The bowl’s bottom, or pieces of it, had not yet been found.

Udelhoven said the camp participants couldn’t have done a real dig on the site even if they’d wanted to, because archaeological exploration of a known burial site is strictly regulated. There was a dig at the site in the spring of 2012, just before the house was closed for a major restoration project.

Besides, she said, a real dig would not likely turn up as many finds as the simulated one.

That is not to say, however, that every shovel full of dirt that the campers overturned contained an artifact. They often had to dig a long time without seeing anything of interest.

And that was just fine with Guinevere Fischer, 11, of Cambria.

“Even if you don’t find anything,” she said, “it’s fun digging in the dirt.”

Every little shard is a piece of history. Madison Hinton holds her discovery, in the dirty hands that she used to dig for it.

There are a lot of "eureka" moments in a simulated archaeological dig during the Historic Indian Agency House's archaeology camp. Isaac Severson, 11, of Rio, and Madison Hinton, 11, of Oxford, happen upon some shards that could be significant artifacts.