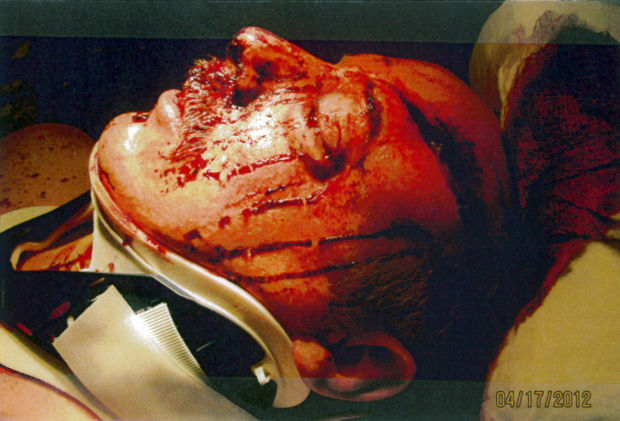 Kevin Droz was photographed at Columbus Community Hospital when he arrived after his accident on April 17. Visible is the deep gash in his forehead caused by the rock that flew through his windshield. 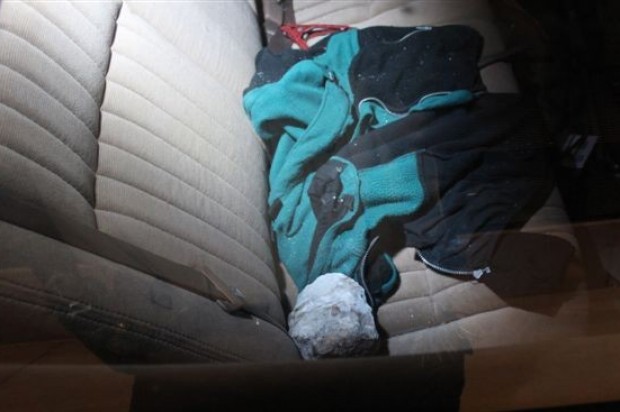 This photo was taken inside Droz’s back seat, which is where a chunk of concrete came to rest after smashing through the windshield of his car April 17.

By Jessica Vanegeren, The Capital Times

It’s often one major event that can forever change the course of someone’s life.

For Kevin Droz, a softball-size ball of concrete about 4 inches thick that came hurtling through the windshield of his Pontiac Grand Prix on April 17, gouging the left side of his head, proved that event.

“Fall River man injured in freak highway mishap,” read the headline on the local story that detailed the accident.

Droz, 51, still doesn’t know how, but he drove himself from the site of the accident on the Highway 151 bridge over American Parkway on Madison’s far east side to Columbus Community Hospital some 20 miles away.

Once stabilized, he was flown by medical helicopter back to Madison, where he stayed at the University of Wisconsin Hospital for 10 days.

He was “stitched up,” he says, with a playing card-size titanium plate put in his head to compensate for a skull fracture. He’s now blind in his left eye and that side of his face is often still numb. He’s meeting with a neurosurgeon soon to examine lingering problems with his right shoulder.

He had auto insurance at the time of the accident and through his wife’s job has health insurance, except for a brief span when they both were unemployed. Droz says he likely will be on disability assistance the rest of his life.

“When I got out of the hospital all I did was sleep for a month,” Droz said from his home in a recent interview. “I’m an emotional wreck. Everything has changed in a big way.”

The changes were more than Droz knew. Just days before his accident, a new law had gone into effect, severely limiting the recourse available to him and others injured due to road maintenance defects.

The new law, which had been sought by local governments for years, took form in the summer of 2011. Known as the “pothole liability” bill, Assembly Bill 180/Senate Bill 125 was sponsored by Sen. Glenn Grothman, R-West Bend, and Rep. Andre Jacque, R-De Pere, and gave presumptive immunity to counties, cities, towns and villages for most damages or injuries resulting from highway defects.

That includes incidents that occur on “all public ways and thoroughfares,” including roads, bridges, streets, sidewalks, driveway aprons, shoulders of highways and public parking lots.

Dane, Waukesha and Rock counties, the city of Milwaukee, the Wisconsin Towns Association, Wisconsin Counties Association, the Outagamie County Board of Supervisors and the League of Wisconsin Municipalities lobbied in favor of the bill.

The law took effect April 4; 13 days before the buckled chunk of concrete apparently bounced up from the road and through Droz’s windshield.

Had the law not taken effect, Droz could have filed a claim for a maximum of $50,000.

“That’s still peanuts,” Droz says. “But it’s something. My medical bills are well beyond that amount now.”

When the bill was introduced, Jacque said the $50,000 could be better spent on fixing roads, according to his legislative website.

He said it was “a basic fairness issue,” and that with the previous system the only ones who benefited from the claims on road damage were trial attorneys. He said that was because most drivers leave the scene, making it difficult to connect the damage to a specific road defect, according to his website.

On his website, Jacque said the bill wouldn’t apply to instances of “egregious negligence” or things like bridges being out, but it would most likely apply to buckling pavement.

Jacque and Grothman were named “outstanding legislators for 2011-2012” by the Wisconsin Counties Association for their work on the bill. Neither returned phone calls Friday seeking comment.

But just how often were people suing before the law was changed? Apparently not too frequently.

According to an article published Jan. 18, 2012, by the State Bar of Wisconsin, the Wisconsin Counties Association paid roughly $1 million in expenses and claims over the past 10 years because of highway defects in incidents that occurred in 50 of the 72 state counties.

“That’s not a lot of money in the grand scheme of things, but it’s enough to raise premiums,” the association’s former legislative associate, Doug Parrott, told lawmakers during a hearing on the bill. “In these lean times, every penny counts.”

The only way people can file suit and win is if they overcome what’s known as the immunity clause. This means the claimant has to prove the government body violated its “ministerial duty,” which is its specific duty to act as dictated by statute or regulation, or that the government body failed to act despite a known or present danger.

“It is possible to overcome the immunity provisions but it is under really unusual circumstances,” says Ann Jacobs, a personal injury attorney based in Milwaukee and a representative with the Wisconsin Association of Justice, which lobbied against the bill’s passage. “That means we, the travelers and users of roads, have lost the right to bring a claim against the people entrusted with the care and maintenance of roads.”

As for Droz, his attorney, Gregory Wright, says the road his client was driving on at the time the concrete chunk came flying through his window was “clearly a defective roadway.”

He says there were busted-up pieces of concrete all around the expansion joints that should have been cleared from the road.

Wright, like Jacobs, says it is extremely difficult and rare that claimants win cases under the immunity clause. Wright added he is still exploring all options.

“Essentially what the Legislature has done in all its wisdom is undercut the ability of people like Kevin to bring a case,” Wright says. “We have our work cut out for us.”

Life on the streets of Kabul after Taliban takeover

Life on the streets of Kabul after Taliban takeover

Couple have breathtaking close encounter with group of humpback whales

Couple have breathtaking close encounter with group of humpback whales

Kevin Droz was photographed at Columbus Community Hospital when he arrived after his accident on April 17. Visible is the deep gash in his forehead caused by the rock that flew through his windshield.

This photo was taken inside Droz’s back seat, which is where a chunk of concrete came to rest after smashing through the windshield of his car April 17.