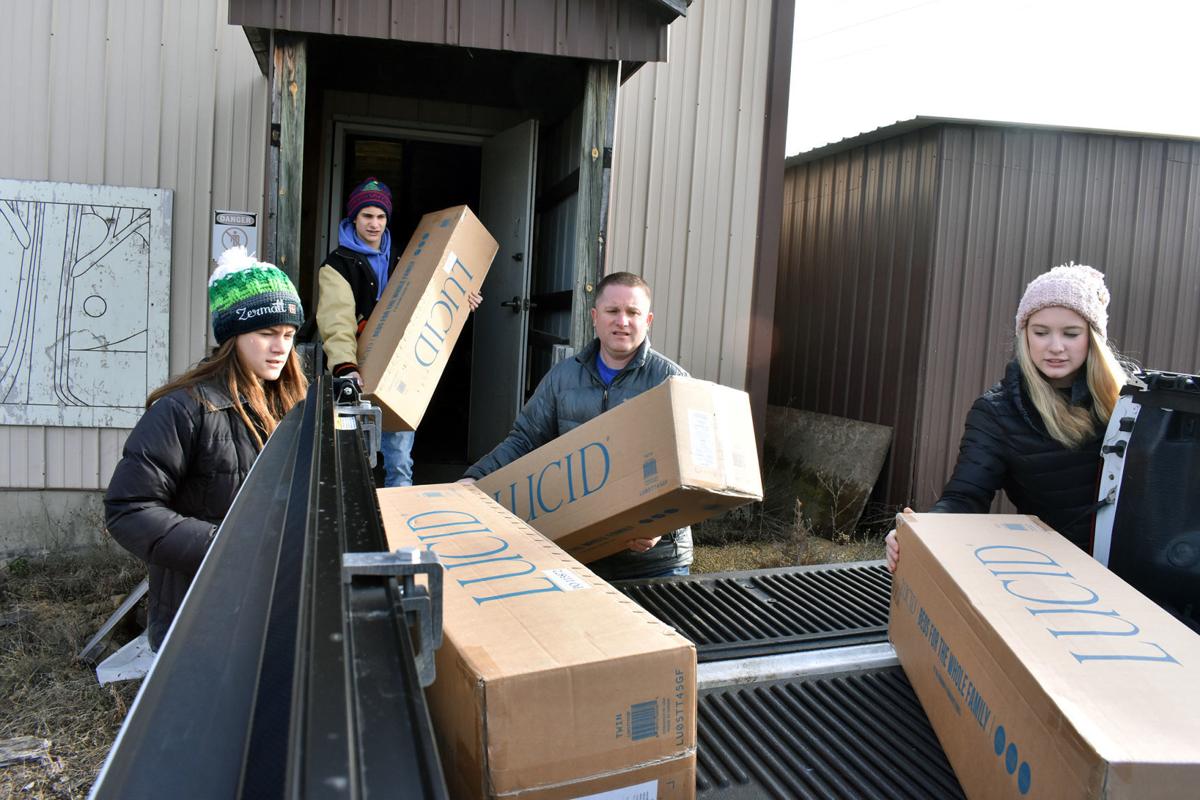 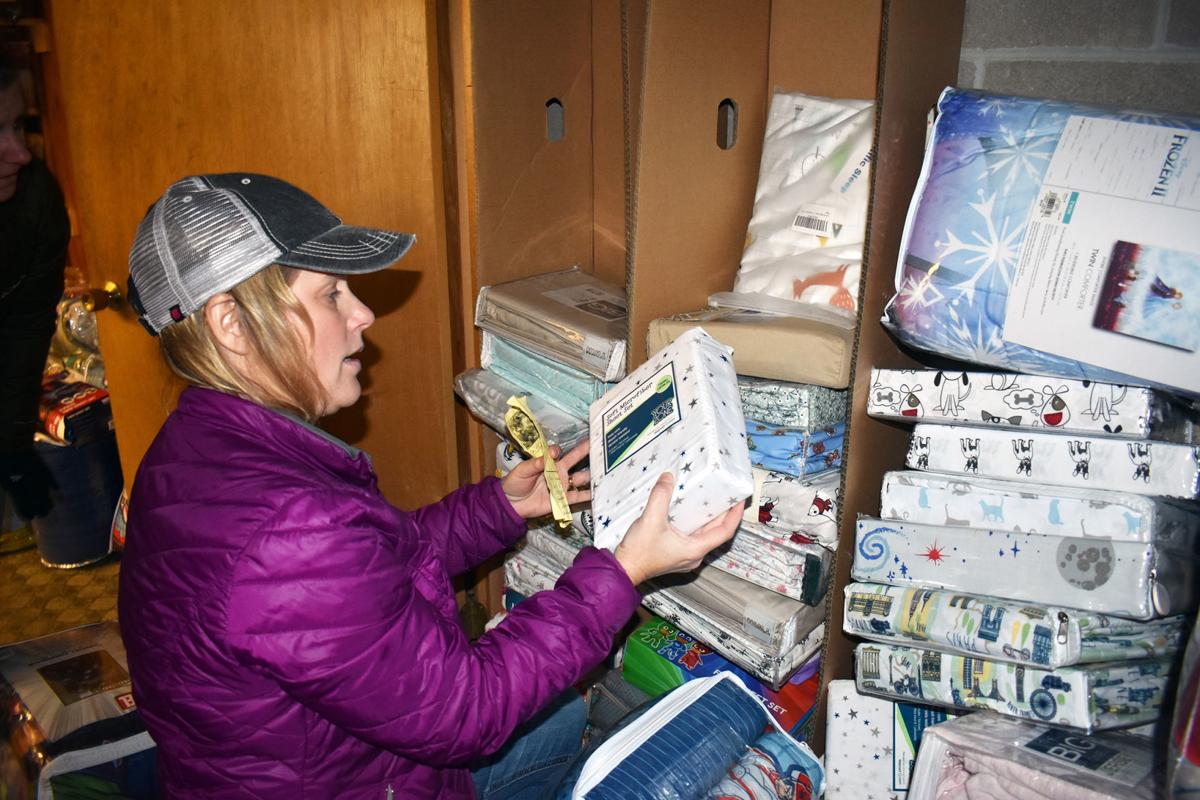 Sara Shaver of the local Sleep in Heavenly Peace nonprofit sorts through bedding at a Portage warehouse Monday for deliveries to Adams County. 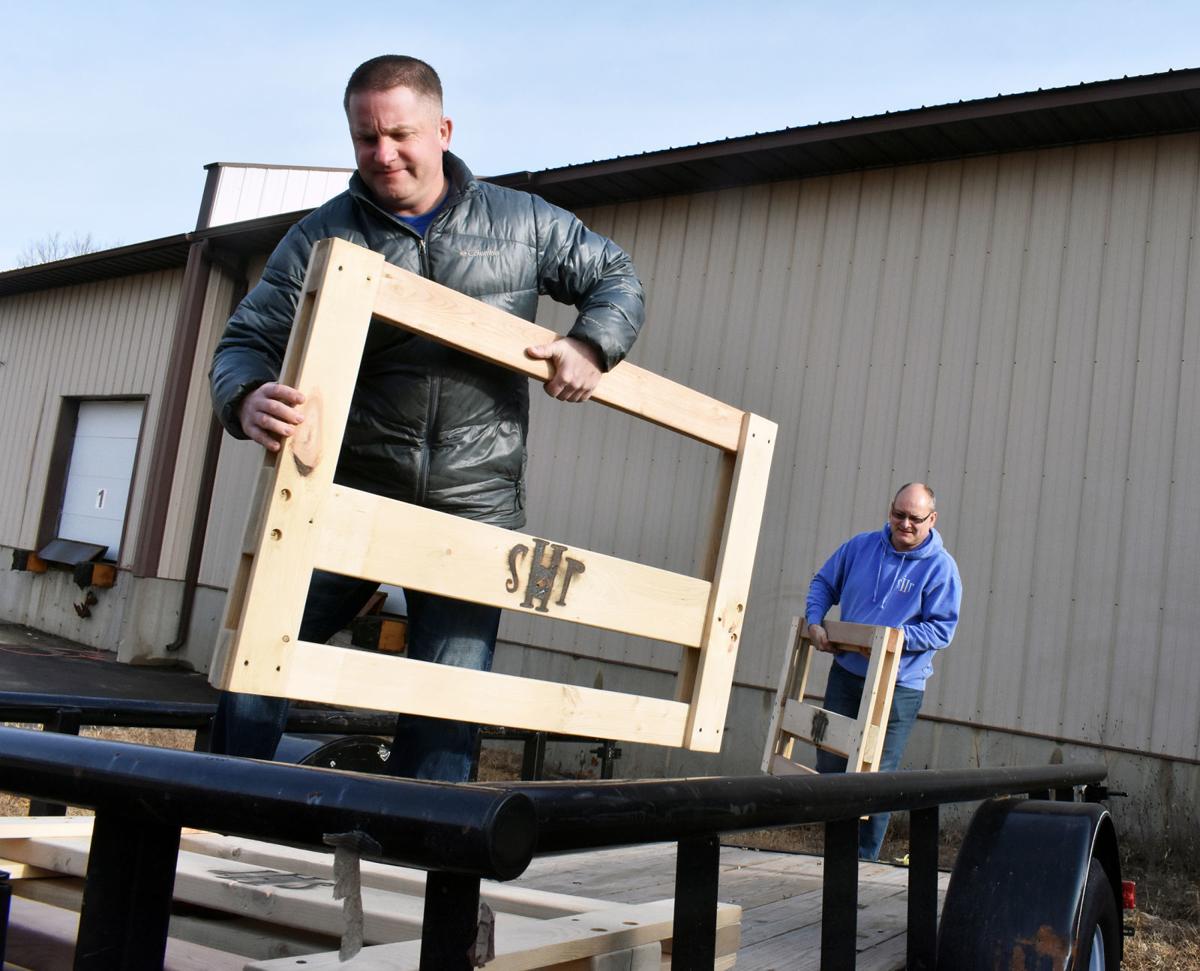 Mitch Beckett, in front, and Tom Shaver of the local Sleep in Heavenly Peace nonprofit load trucks at a Portage warehouse Monday with beds to be delivered in Adams County.

Volunteers had only 15 minutes to stay on schedule as they loaded beds and bedding into two trucks Monday morning in Portage.

They would take five beds into five Adams County homes that afternoon — the timing of these deliveries motivating Sara Shaver to work swiftly at the warehouse on Albert Street.

“We’re getting five more kids off the floor today, just in time for Christmas,” Shaver said.

Shaver is among 315 Portage Sleep in Heavenly Peace volunteers who built and delivered 305 beds to families in need in 2019.

They built and delivered 100 beds in 2018, the nonprofit’s first year in operation, and will need to keep growing to keep up with the regional demand.

“We’re getting roughly 30 bed requests per month,” said Brian Scheibach, president of the Portage chapter. “That’s one a day, on average.”

It delivers beds to families in Columbia, Marquette, Adams, Sauk, Green Lake and Dodge counties, the requests coming directly from the families or from anyone in a child’s life, including his or her relatives, friends, teachers or medical professionals.

Its volunteers want to build 400 beds in 2020 and have almost no reason to worry about accomplishing that goal, considering the momentum.

“You just feel so wonderful doing it,” volunteer Pam Dodd said of the nonprofit’s success since forming in May 2018. “It’s about the joy you see from the people.”

Dodd’s a retired first-grade teacher who worked for more than 30 years in the Portage Community School District and who sits, today, on the front lines for seeing the need. She is the first person the applicants talk to, asking them about their situations and determining what the nonprofit will do and when.

Their work is never complete, said Dodd, who’s also taken part in three deliveries, including one where the recipients, she remembers, had no furniture in their home.

“We’re almost caught up now,” Dodd said, “but we’ll be way behind soon because there’s not another build until February.”

For the dates of its pending 2020 builds and to register for beds as needed, Scheibach hopes people will visit the group’s website: buildshpbeds.org/chapter/wi-portage.

Local support in 2019, he added, included more than 225 volunteers to build 100 beds for a national build day June 15, when the local chapter had sought only 150 volunteers.

“A lot of chapters will do corporate builds, which means they’ll find local companies to donate money and who also bring in volunteers,” Scheibach said. “But these are community builds: We do this one $50 check or $75 check at a time. It’s tremendous.”

Residents in the area always seem to find reasons to help each other out, Shaver said of the group’s early success. But it’s still hard for her to believe sometimes.

“We never even thought we’d hit 100 in our first year,” said Shaver, co-owner of Compass Counseling in Portage. “Then it really took off in 2019. We’ve had so many volunteers and we just kept building.”

Scheibach, the director of instructional technology in the Cudahy School District near Milwaukee, said the Portage chapter has about eight core members and another eight or so serving as “build team managers” who teach new volunteers how to build at various stations.

Not many of them had known each other before May 2018, he said, and only one of the team managers works professionally in construction.

The builds have also been a way for area residents to accomplish mandated community service hours, the nonprofit seeing repeat volunteers from this group even after they complete what’s required.

“Two of them have just enjoyed helping out and that’s pretty cool,” Scheibach said. “I keep looking for them at the builds and, sure enough, they show up.”

Schools in the region have chipped in, too, including penny drives at Bartels Middle School (Portage), a pillow drive at Woodridge Elementary (Portage), fundraisers at Portage High School and a bedding drive at Pardeeville Elementary.

“Churches will show up with 50 quilts and now we probably have enough bedding for a year,” Scheibach said of the help. “Everyone has found a way to get involved in this mission.”

Missing out on a sizable federal grant will neither doom Columbia County CASA nor stop it from seeking expansion into Dodge and Juneau counties.

Sleep in Heavenly Peace in Portage hopes 150 volunteers will make 100 bunk beds for children in a single day.

A Portage family of five built 30 beds for area children during the early weeks of the public health emergency.

Sara Shaver of the local Sleep in Heavenly Peace nonprofit sorts through bedding at a Portage warehouse Monday for deliveries to Adams County.

Mitch Beckett, in front, and Tom Shaver of the local Sleep in Heavenly Peace nonprofit load trucks at a Portage warehouse Monday with beds to be delivered in Adams County.