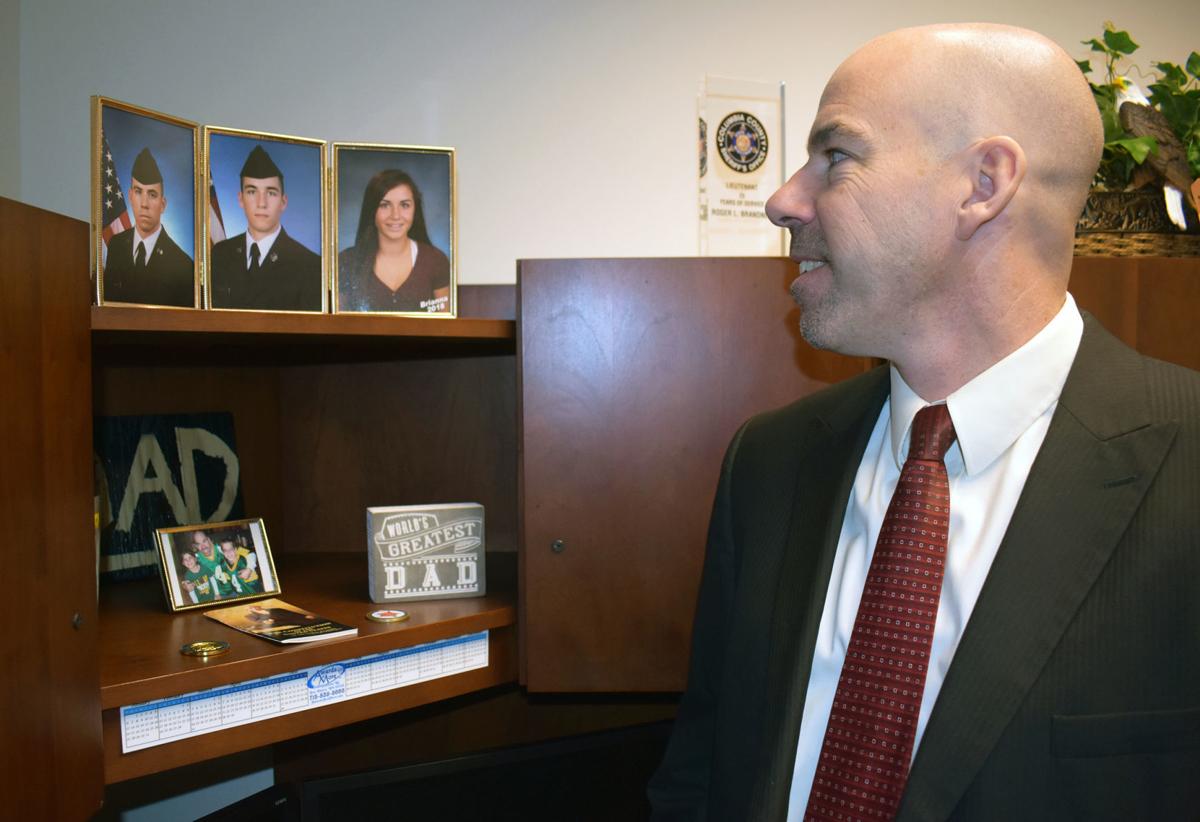 One corner in the new office of incoming Columbia County Sheriff Roger Brandner is devoted to his children. Sons Bailey and Blake are both in the U.S. Air Force Reserves; Blake is a Marquette County sheriff's deputy; and daughter Brianna is a junior at Portage High School. 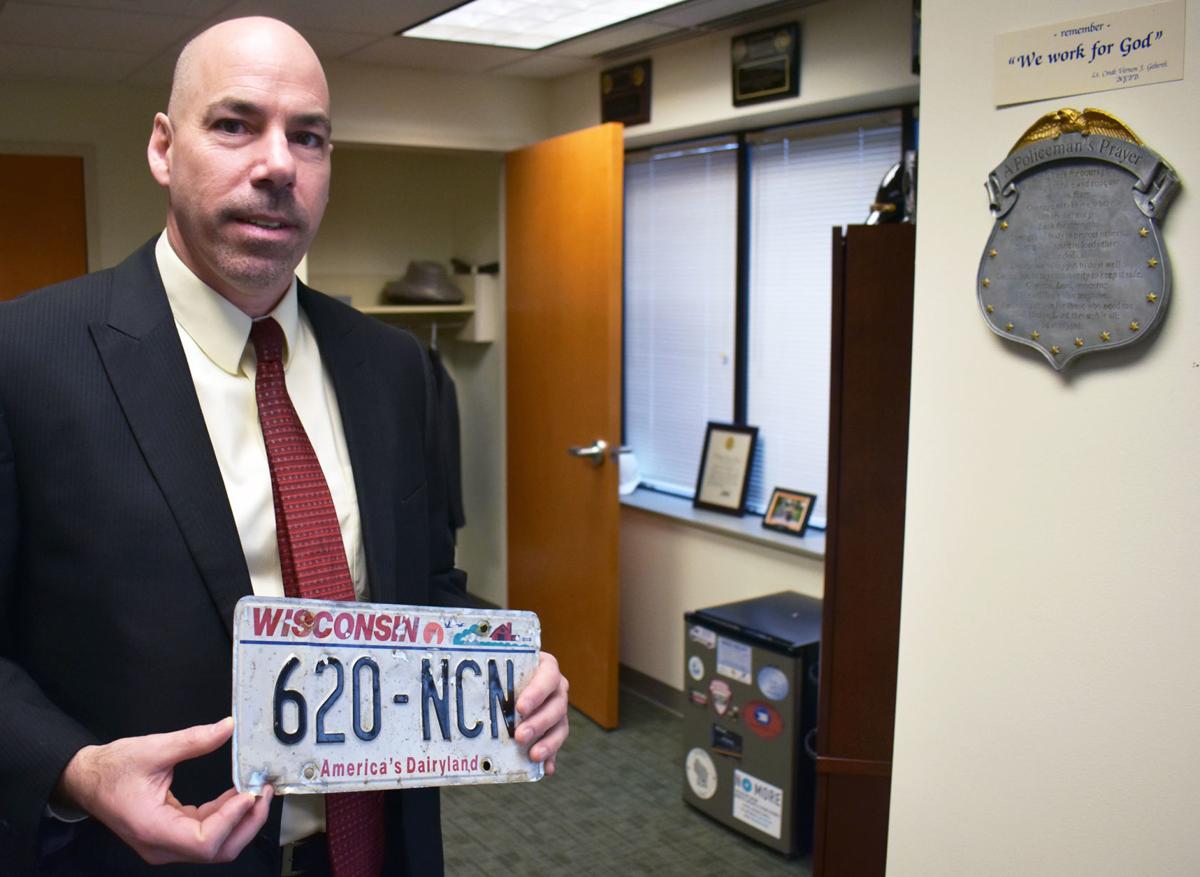 One of the artifacts on display in incoming Columbia County Sheriff Roger Brandner's new office is a license plate, damaged by bullets from an incident in which a suspect shot at deputies. Brandner will be sworn in on Jan. 7.

But already, he’s taking the helm of the department for which he’s in his 27th year of working. He’s moved into the office that his predecessor, Sheriff Dennis Richards, used to occupy. And, he’s taken the sheriff’s customary seat at monthly meetings of the Columbia County Board’s public safety committee.

“The sheriff has been so gracious about letting me get involved,” Brandner said. “I cannot say enough about the sheriff allowing me to transition into the job in the last couple of months.”

Brandner, 47, was unopposed and endorsed by Richards when he ran on the Republican ticket for a four-year term as sheriff. With no Democrat on the ballot, his election was all but assured.

In the weeks before he takes the oath of office, Brandner said, the first item on the to-do list includes filling job vacancies in the department, including the vacancy in the command staff that will be created by his elevation to the top job. Det. Sgt. Jason Kocovsky will be promoted to detective lieutenant, Brandner said, and other vacancies, including patrol deputies and jailers, are in the process of being filled.

Richards and Brandner are of one mind on one key reality: The sheriff’s office doesn’t have enough employees to address increasing demands for service in a county that covers 774 square miles.

The department has 49 sworn officers, which does not include jailers or administrative personnel.

Brandner said that’s not very many people to handle the more than 46,000 calls the department received in 2018.

County budget records show the last time the county board increased the department’s staff was in 2014, when four positions — two deputies and two jailers — were added.

Not only does the department need more deputies, Richards said it also needs to retain the deputies it hires, and that’s getting more difficult each year.

Richards said he can remember when an opening for a deputy yielded as many as 150 applicants. Now, he said, the number of applicants per available position runs between 15 and 20, half of whom are typically unqualified.

It’s not unusual for Columbia County to hire, train and equip a deputy, only to lose him or her to another law enforcement agency — perhaps one that is closer to the deputy’s original hometown, or for more pay.

“But I’d rather leave a position open than lower our standards,” Richards said.

Brandner supported Richards’ August budget request for two additional deputies at a cost of nearly $80,000 each annually in compensation and a new midnight-shift lieutenant at $92,000 and jail lieutenant at $88,000.

Although one of the deputy requests ranked near the top of those received, the county denied the requests.

Brandner said the some investigations may get put off as deputies are busy with other work.

Brandner said he understands the county’s fiscal challenges, including limits imposed by the state on the amount of property tax money the county is allowed to collect.

He said some proposed revenue solutions such as utilizing vacant jail space to house state, federal or out-of-county inmates or pursuing grants to increase deputies on patrol could have potential drawbacks.

The county could be on the hook if an inmate from another agency developed health problems while in the county’s facility and when grants run out, the county could have to pay to retain a deputy.

“We could lose money by trying to make money,” Brandner said.

“I’m excited for him, because he’s young, and because he brings new ideas and new energy,” Babcock said.

Richards, too, acknowledged Brandner’s leadership experience, but also said he hopes Brandner will remain a hands-on law enforcement officer, with direct contact with the public.

Brandner said he intends to do just that, though he acknowledged taking the top job will leave him less time to work on the investigations that have, over the years, given him satisfaction.

“I think it’s important for a sheriff to be out and about in the community,” he said.

As Brandner prepares to take over the leadership in the sheriff’s office, he will achieve a position he first sought 12 years ago and lost to Richards by fewer than 400 votes.

He said he’s far from bitter toward Richards — not immediately after the 2006 election, and not now.

After Richards won the election, Brandner took Richards out for breakfast, and vowed that his job, from then on, would be to make Richards look like the best sheriff possible.

“Even though I lost, I wasn’t disgruntled,” he said. “And I consider Dennis a great friend.”

One of the things he said he learned from Richards was compassion.

“I’ve learned from him not to judge, not even suspects or people who are accused of crimes, but rather to simply figure out what happened,” Brandner said.

Some of those same lessons Brandner said he’s like to pass on to the next generation of law enforcement officers by creating a program in the sheriff’s office to allow teens the opportunity for hands-on exploration of police work.

Richards steps down after 12 years as Columbia County sheriff

Dennis Richards is contemplating how he’ll sign off on the dispatch radio for the last time without letting his voice break.

Columbia County will have a balanced budget next year, but at some cost.

As Columbia County officials heard appeals Friday for new employees or extended hours for existing employees, one theme – too much to do, and …

Brandner to be lone name on ballot for Columbia County Sheriff

Just hours before Columbia County Sheriff Dennis Richards was scheduled to sign off for the last time, his soon-to-be successor appealed Frida…

Just hours after he took the oath of office Monday, Columbia County Sheriff Roger Brandner heard what he’d hoped to hear from all five members…

With the thanks and best wishes of the Columbia County Board of Supervisors, about a dozen county employees, with more than two centuries of c…

After almost nine months of negotiation, a mediator has proposed a three-year contract between Columbia County and 36 union-represented office…

One corner in the new office of incoming Columbia County Sheriff Roger Brandner is devoted to his children. Sons Bailey and Blake are both in the U.S. Air Force Reserves; Blake is a Marquette County sheriff's deputy; and daughter Brianna is a junior at Portage High School.

One of the artifacts on display in incoming Columbia County Sheriff Roger Brandner's new office is a license plate, damaged by bullets from an incident in which a suspect shot at deputies. Brandner will be sworn in on Jan. 7.