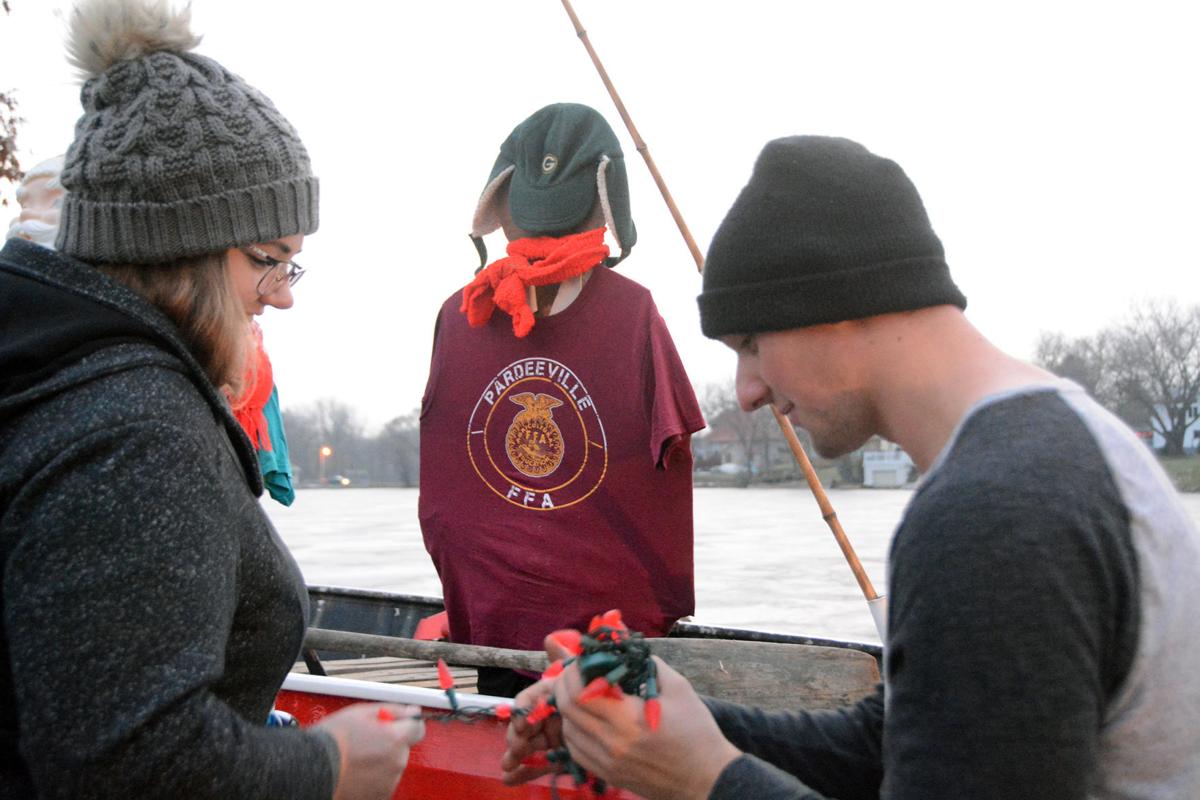 Pardeeville High School FFA seniors Natalie Farrington and Dylan Anderson untangle a string of lights while setting up a fishing-themed display at Chandler Park in anticipation of the fifth annual lights event which began Saturday. 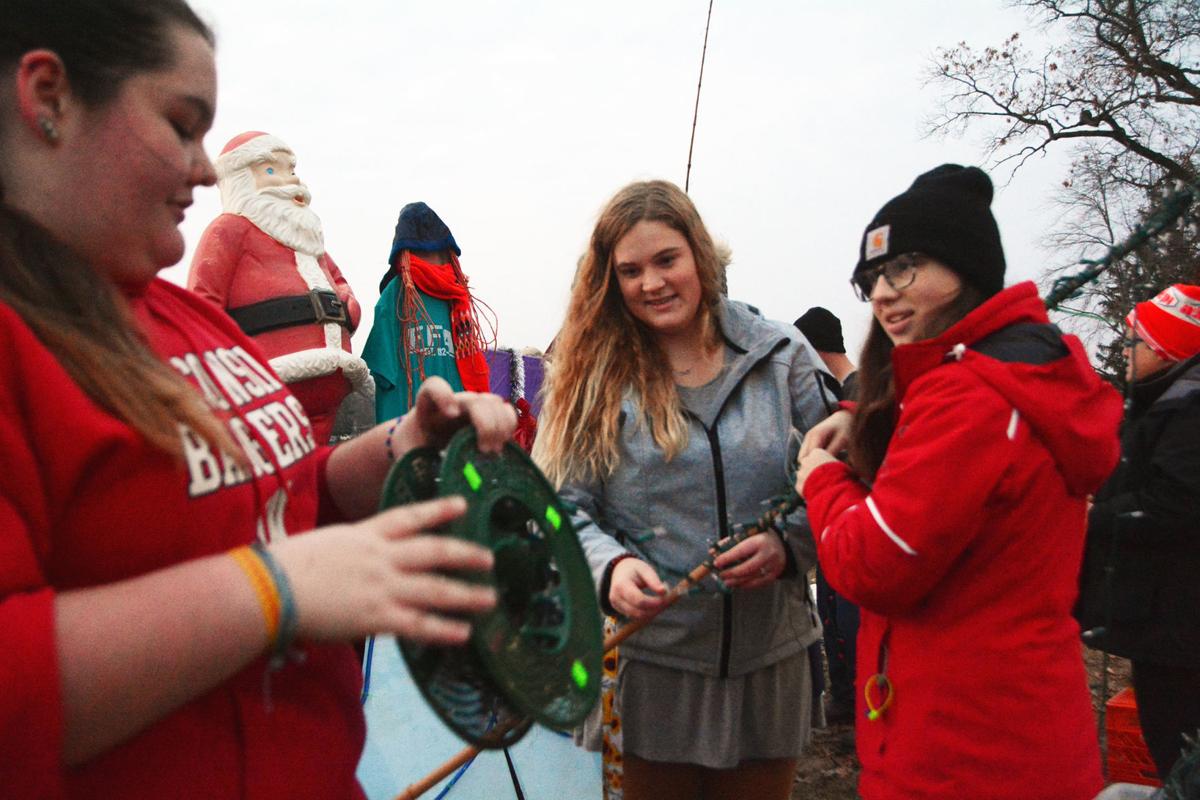 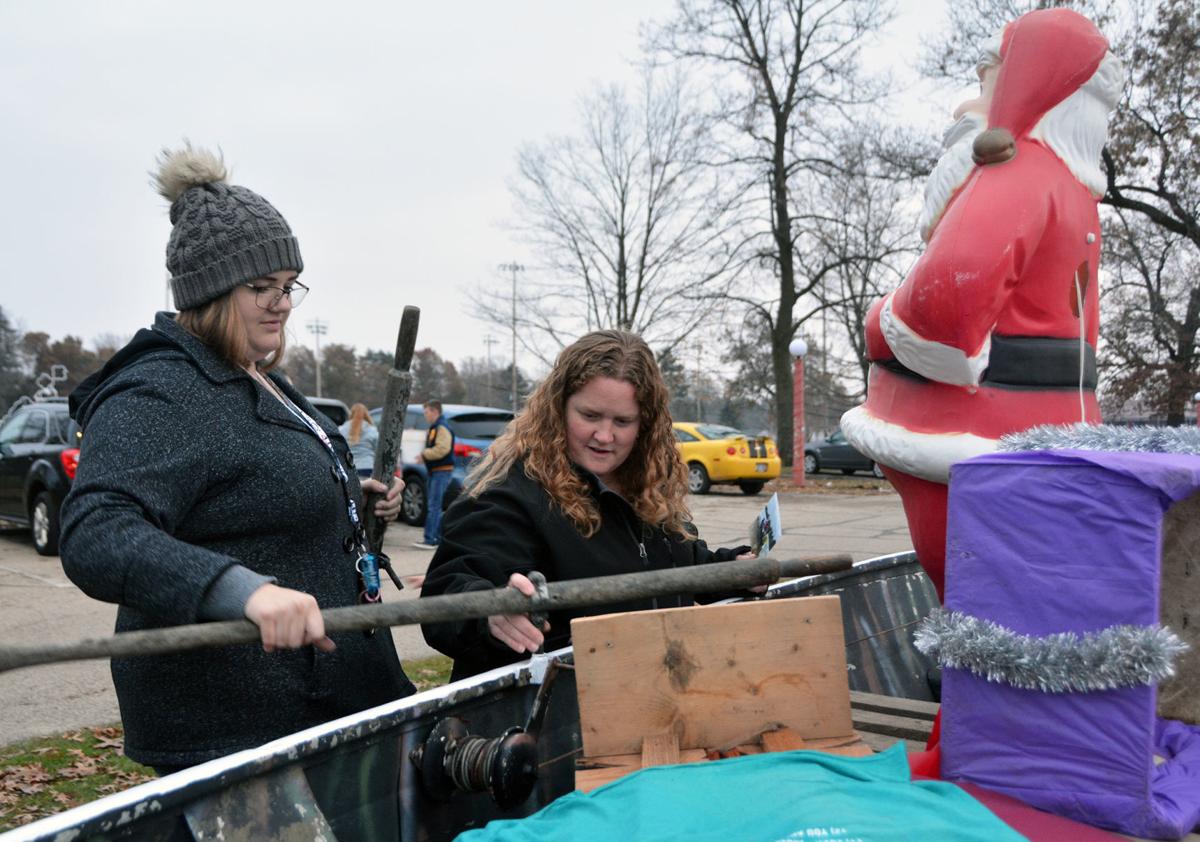 Pardeeville FFA senior Natalie Farrington helps adviser Amanda Seichter attach a wooden oar to a boat display set up near Park Lake in Chandler Park as a part of the annual lights event held there. "A Country Christmas" by the group includes three agriculture-themed displays in the show that began Saturday. 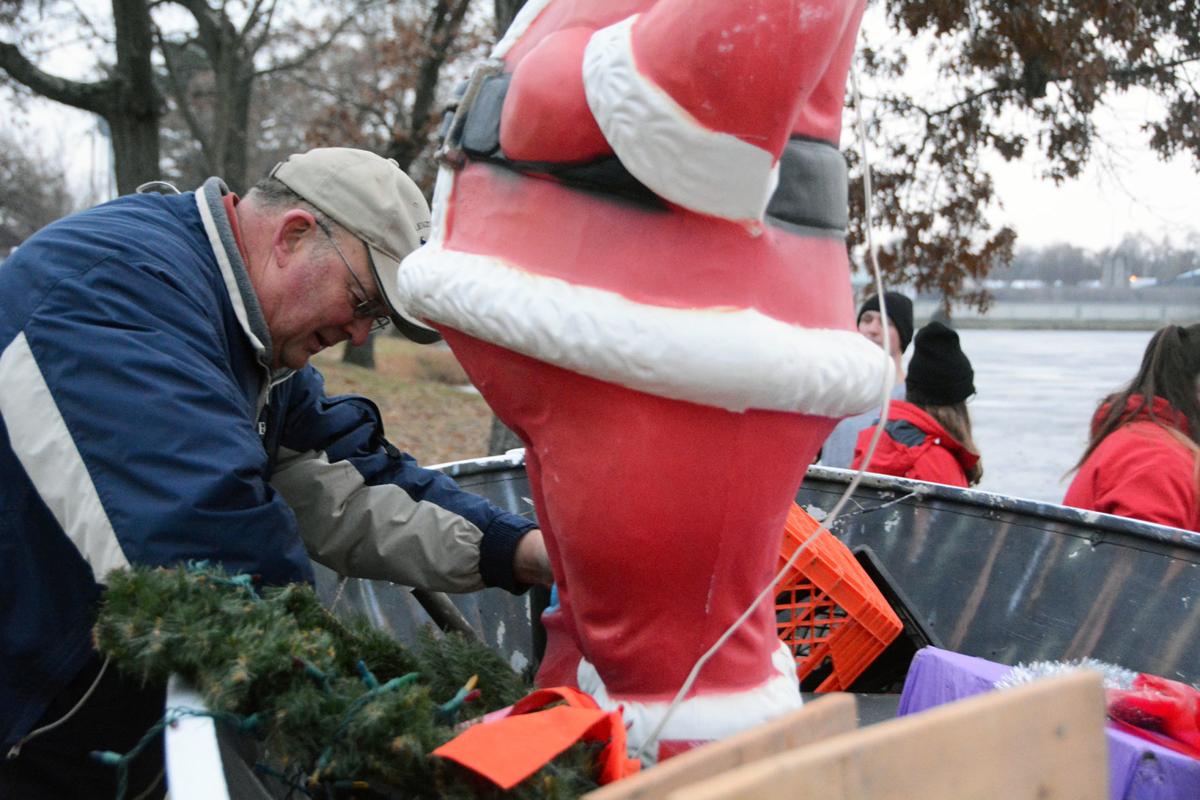 PARDEEVILLE — It takes a small army of volunteers and organizations looking to invest in holiday cheer to ensure the Chandler Park Holiday Lights display happens each year in Pardeeville.

Volunteers showed up every weekend in November before Thanksgiving, even on the opening day of deer hunting, to string lights around the various structures within the park to get ready for opening weekend. The display, and trips to see Santa, began Saturday.

Despite a mix of rain and snow with temperatures nearing the freezing mark, organizer Phil Possehl said he was able to speak to a fair number of children looking to put in a good word with the big guy in a red suit.

“It was pretty good for having rain,” Possehl said laughing, referencing the constant mist that fell Saturday evening. “There must have been 40 to 50 of them.”

Children and adults are able to walk or drive through the one-way curved road through the park. Santa sits in shelter No. 3 awaiting young people’s answers to questions about their most desired gifts and what they think of the various displays.

Among the displays are different scenes.

“Everybody gets to put up fun lights of some sort,” Possehl said of the event, now in its sixth year.

It began with secondhand lights donated to Possehl and other planners. Along with some lighted snowflakes, glowing candy canes and bright snowpeople, the lights were the first to go up after Possehl spent hours in his garage testing whether the strings would light up before hanging them in the park in 2014, its first year.

Now with the support of patrons and the community, Possehl said they were able to procure new lights. There are treasured childhood figurines along the lighted path to amuse visitors, like Big Bird from Sesame Street. A donation basket sits near the entrance to fund future years.

“We try and try to get more and more new stuff,” Possehl said.

From the Pardeeville Lions Club to churches, the public library to local businesses, Possehl said the number of lighted displays continues to grow. And as volunteers show up on November weekends to lend a hand with the labor, groups come out to the park in weeks leading up to opening day to ensure their displays are perfected.

Pardeeville High School FFA members and adviser Amanda Seichter spent time at the park the week before Thanksgiving to arrange “A Country Christmas” in three scenes throughout the park. One has lights from the ground illuminating wooden white cow outlines with wreaths around their necks. Another is fishing themed, with Santa in a boat and long rods of wood entwined with strings of lights.

Seichter’s mom, Becky Levzow, was in attendance helping the half dozen students arrange various pieces at the edge of Park Lake. Levzow said she and her husband, Ralph, help because recognition of agriculture is important.

“We’re dairy farmers and we really see the value in helping the kids with this,” Levzow said.

At least one display is anonymous, arranged to honor someone’s late spouse. Others highlight worthy organizations such as the Pardeeville Bulldog Support Foundation, which was established to raise money for sports and fine arts buildings as well as scholarships.

Possehl said Levzow has her own addition to the park display: flamingos.

Levzow said for the last half decade, people have regularly approached her to talk about how much they look forward to seeing the varied lighted scenes each year.

“It’s surprising how many people ask if we’re bringing stuff back,” she said.

Possehl takes Sunday off, allowing another Santa hopeful to don the big red suit; as long as his replacement doesn’t have to plow the village streets. Hosting Santa Claus’ shelter is a family effort, with Possehl’s wife, Linda, portraying Mrs. Claus and his daughter, Casey, donning an elf costume.

“We do it so we can see the smile on little kids’ faces,” Possehl said, referring to “kids” as all the humans of varying ages who feel delight at visiting Chandler Park. “They get that warm, fuzzy feeling.”

Pardeeville High School FFA seniors Natalie Farrington and Dylan Anderson untangle a string of lights while setting up a fishing-themed display at Chandler Park in anticipation of the fifth annual lights event which began Saturday.

Pardeeville FFA senior Natalie Farrington helps adviser Amanda Seichter attach a wooden oar to a boat display set up near Park Lake in Chandler Park as a part of the annual lights event held there. "A Country Christmas" by the group includes three agriculture-themed displays in the show that began Saturday.