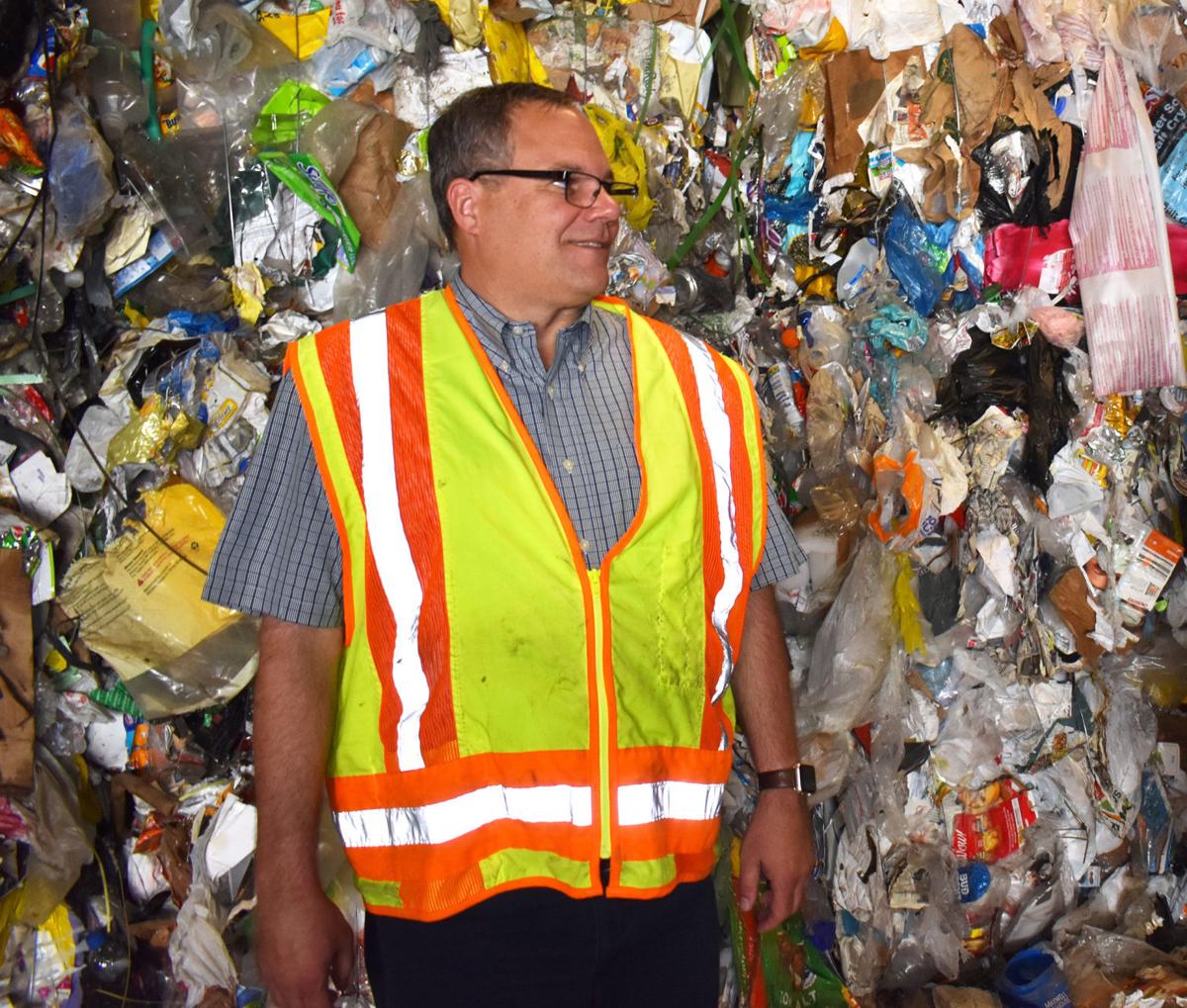 Columbia County Solid Waste Director Greg Kaminski shows just some of the bales of recycled plastics -- things like yogurt and margarine tubs -- that the Solid Waste Department recycles and stores. 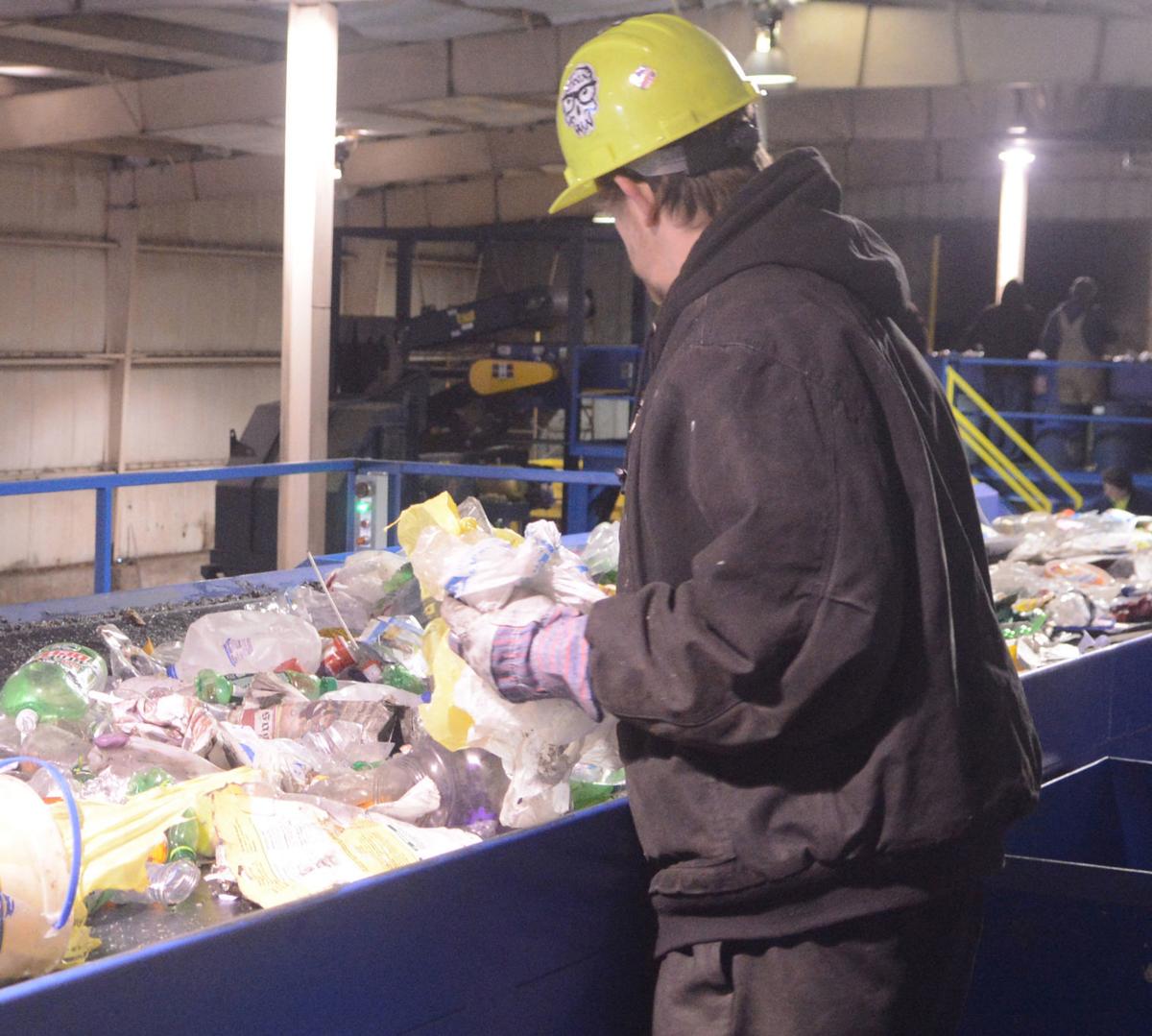 A nearly $2 million investment in a bigger, faster and more automated recycling system could pay for itself and then some, the director of Columbia County’s Solid Waste Department said Monday.

“It’s a big expense. I realize that,” said Greg Kaminski, solid waste director. “But it’s something we could get a payback on.”

County Comptroller Lois Schepp said the matter will need to be discussed by the County Board’s Finance Committee when it meets April 11. There would be an expense, of an undetermined amount, to hire an engineering company to craft a request for proposals, so that the county officials can get a firm grasp of how much the system would cost.

And its installation wouldn’t happen any sooner than next year, Kaminski said.

His rough estimate of the system’s cost is about $1.7 million, but the project also would entail abandoning the building where the existing recycling system operates now, and erecting a much larger building.

How it would be paid for is another question that has yet to be resolved. Bonding – borrowing the money and repaying the debt with a property tax increase – is just one option, Kaminski said.

Kaminski told the committee he’s looking at a system that would incorporate most of the existing sorting apparatus that went online in November 2015. The system, which combines automated sorting mechanisms with the work of human “pickers,” was part of the county’s $45.51 million building project, and cost about $950,000.

Kaminski said he’s looking at a system that could sort and bale as much as 15 tons of material per hour, although a realistic goal would be closer to 12 or 13 tons.

Even in a fluctuating market for recycled materials, the ability to process and sell more materials would bring in more money for Columbia County.

But there are other advantages to an improved recycling system besides revenue, said committee member Henry St. Maurice of Columbus.

“This makes the county more sustainable,” he said.

Mark Sleger of the town of Lowville, the committee’s chairman, said it’s important to consider the risks, too.

Kaminski replied that if county officials decide to go ahead with acquiring the new system, he would seek to lessen the risk by seeking contracts from outside haulers, to guarantee that the Columbia County’s recycling operation gets enough material to make an expanded system pay.

According to Kaminski, one of the components that the expanded recycling system would utilize is an OCC screen (OCC stands for “old corrugated cardboard”), which would automatically sort paper and cardboard that now requires hand sorting.

This would mean fewer people would be needed to assist in the sorting process; many of the pickers, who are paid $10 per hour, are work-release inmates from Columbia County’s Huber Center.

The expanded recycling system would also add more automation to the process of sorting the various types of plastic material that people throw into their single-stream recycling containers.

County Board First Vice Chairman Dan Drew of the town of Pacific noted that an expanded system would not only require a new building – because the existing building is much too small, with no room for expansion – but also that the solid waste facilities in the town of Pacific might need more space to store the materials once they’re sorted, baled and ready for sale.

Nevertheless, Drew praised Kaminski for thinking of the department’s future.

“I think that looking ahead is a really smart move,” he said. “It takes time to put things in place, especially when county government is involved.”

Columbia County District 15 Supervisor Mark Sleger wants you to rinse your empty milk carton before tossing it in the recycling bin.

Columbia County's recyclables pile up, as market dries up

Someone tried to recycle a toy flying disk decorated with a University of Wisconsin logo.

TOWN OF PACIFIC — Matthew Jaworski had a bag full of empty glass, tin and plastic containers to discard.

Other people’s trash is Columbia County’s treasure, to the tune of $1 million a year.

Officials in Sauk and Columbia counties have time, but not much, to figure out what they’re going to do with the heavy-duty plastic farmers us…

One person’s trash is not Columbia County’s treasure — not to the extent, anyway, that Greg Kaminski would like.

Columbia County residents threw away significantly more garbage in 2020 because of the pandemic, resulting in about $85,000 in additional cost…

Columbia County Solid Waste Director Greg Kaminski shows just some of the bales of recycled plastics -- things like yogurt and margarine tubs -- that the Solid Waste Department recycles and stores.